Although Turkey has already rallied 25% from the January 20th lows, the weight of evidence suggests this may be the start of a much larger move to the upside on an absolute and relative basis.

Structurally Turkey has been in a downtrend since a failed breakout near its all-time highs of 77.50 in early 2013. In August of 2015 prices broke below long-term support at 40 and have since been building a multi-month base below that level. Last week prices were able to break and close above it, while also closing above the downtrend line from the 2015 highs. END_OF_DOCUMENT_TOKEN_TO_BE_REPLACED

This weekend I did my regular global macro review. This is when I go country by country analyzing the weekly and daily charts of all of the stock markets around the world. Each chart includes a momentum study (14-period RSI) and a 200 period moving average that we use to help with trend recognition. I trade indexes all over the world, simply because I can. Why wouldn’t I? END_OF_DOCUMENT_TOKEN_TO_BE_REPLACED

END_OF_DOCUMENT_TOKEN_TO_BE_REPLACED

We held a free webinar this week to show off our new ChartBook and discuss how to best invest for 2016 using intermarket analysis. At All Star Charts, we use a global top/down approach in order to take the weight-of-the-evidence in Stocks, Commodities, Currencies and Interest Rates to come up with a theme. Once we have a major global theme, we will break it down to specific U.S. Sectors or Country ETFs and either buy or short individual ETFs or stocks to express our theme using strict risk management procedures END_OF_DOCUMENT_TOKEN_TO_BE_REPLACED

END_OF_DOCUMENT_TOKEN_TO_BE_REPLACED

We have to trade and invest in the market that we have in front of us, not the one that we want. Therefore we have to be able to approach the market from a completely unbiased perspective. We don’t care if the market doubles in price or if it gets cut in half. We want to try to take advantage of moves in both directions. This is America after all.

I know it’s not sexy, but since October 23rd, we have wanted to approach the major U.S. stock market averages from a more neutral perspective. This is the day that both the S&P500 and the Dow Jones Industrial Average first got above what was then, and still is, a flat 200 day simple moving average. Securities in that sort of environment create headaches, for both the bulls and the bears. The reason is because END_OF_DOCUMENT_TOKEN_TO_BE_REPLACED

Sorry for the cheesy headline. I couldn’t resist.

Anyway, I know everyone is worried about rising rate environments and whatever China is up to or not up to these days, but I think one of the most interesting scenarios globally right now is actually what’s happening in Turkey. I’m not one to ever watch TV or read the news, but I do see headlines coming across the stocktwits and twitter streams which gives me a pretty good idea of what they’re talking about. Generally, it’s either too late or not relevant. So I think the fact that Turkey is not getting much press these days means we might be on to something.

Here’s what I’m seeing. This is a weekly candlestick chart going back to that epic crash back in 2008. After the 2010 peak, prices corrected nicely and found support at exactly the 61.8% Fibonacci retracement of the entire rally. Once again these levels come into play beautifully. I still don’t understand how so many people purposely choose to ignore them. Anyway, prices then bounced in 2012-2013 towards those former highs before rolling over to find support once again at that key retracement just above $41. Notice how weak the next bounce in 2014 turned out to be. It was a heads up that we could ultimately break the support that had held since 2011. Sure enough, we are now below all of that support: 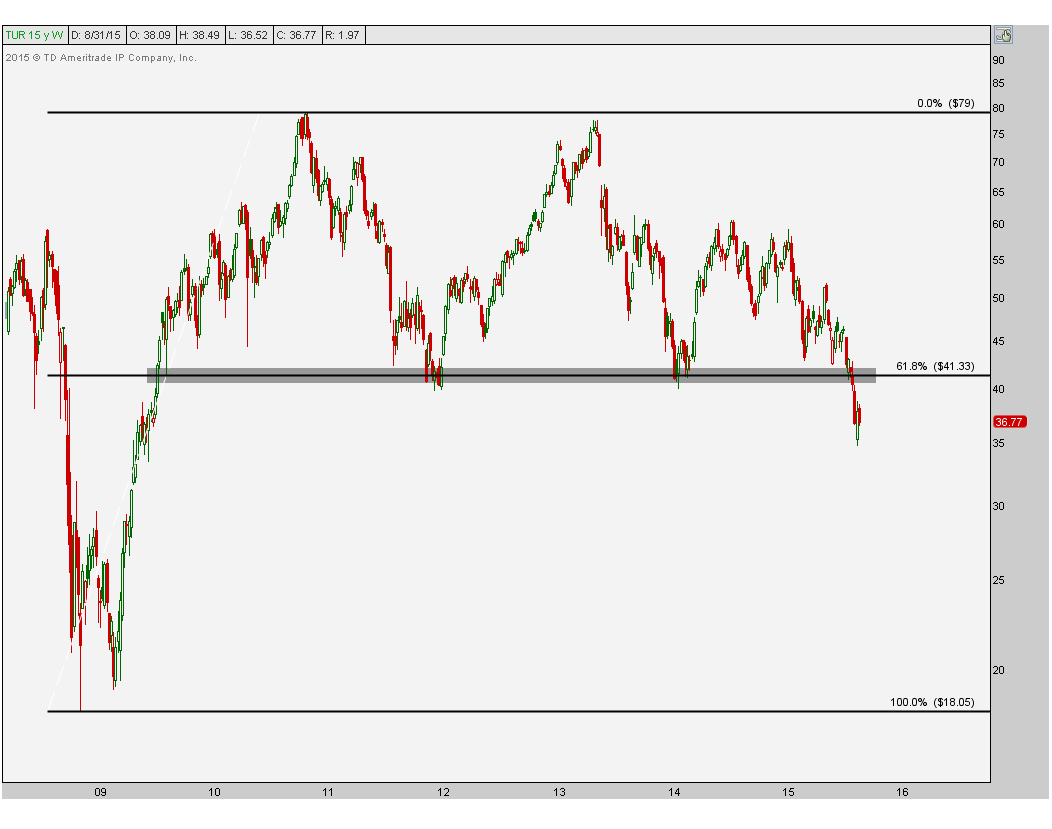 This is a problem. Sometimes you get failed breakdowns that turn into a whipsaw, which becomes the catalyst for a nice rally. Long time readers of the blog and Subscribers to our research know that I love those. But they generally have to come quickly. In this case, prices have now been below all of this support for several weeks. Not good.

This next chart is a little bit of a close-up to what’s happening here. I included momentum down below to show how the recent oversold conditions are confirming the new lows. We’re using a 14-period RSI which remains in a bearish range and has not put in any divergences that could point to a possible reversal: 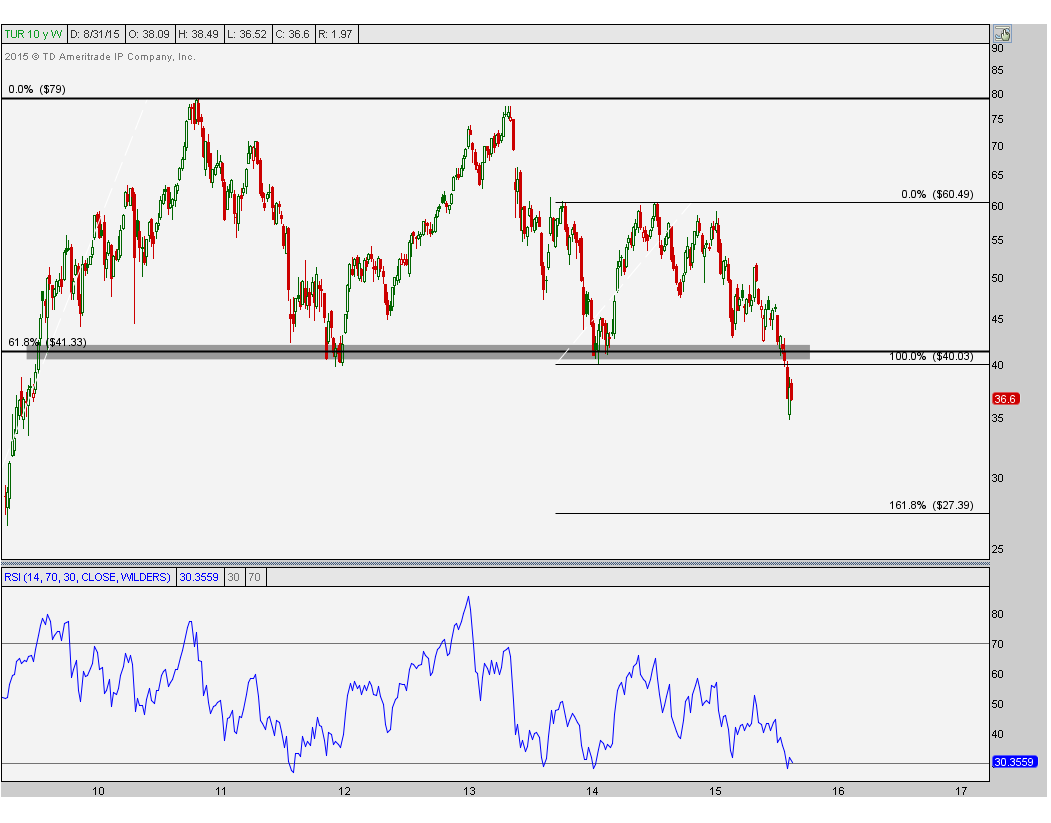 Price target-wise I’m looking at just above $27 which represents the 161.8% Fibonacci extension of the most recent rally last year. This was the last bounce off that key $40 support level first mentioned above. I think that’s where we’re headed and where we want to be covering tactical short positions. This represents another 25% decline from current levels. That’s a lot.

Risk management-wise, I see no reason to be short Turkey if prices are above that former support since 2011 near $40. But I would be an aggressive seller into any strength near that level as former support turns into overhead supply. We recently saw this happen in the S&P500 (See here).

I think Turkey is in a lot of trouble.

Click Here to receive updates on these charts on a weekly basis along with 40 more countries around the world using multiple timeframes.

Let’s take a good look at Turkey today. This is a weekly logarithmic bar chart of the iShares MSCI Turkey ETF $TUR. You can see that prices peaked in the highs 70s in 2010 and again last year. We are now dangerously testing the support levels from late 2011. 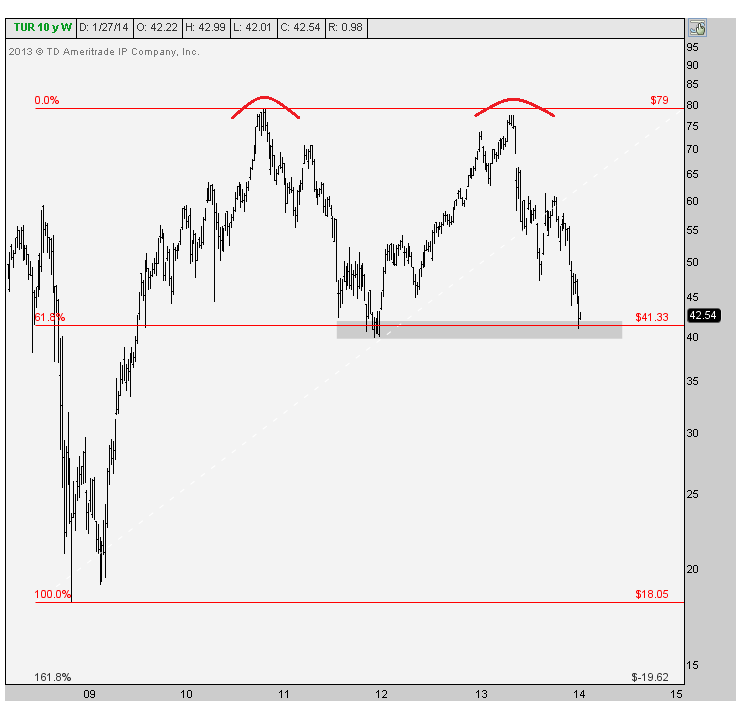 I’m not sure how much a Turkey breakdown (or rally for that matter) will affect US stocks. I get mixed signals when I run the correlation studies. Over the last month, Turkey and the S&P500 have a high positive correlation +0.74, but just as high of a negative correlation over the last quarter -0.73. Same goes for the last 12 months – very high negative correlation -0.72. But it’s tough to imagine emerging markets and Equities as an asset class holding up if these guys keep crashing. I mean, Turkey has been in crash mode all year, and US stocks have been getting hit hard right?

Money continues to flow into Treasury Bonds as US interest rates keep dropping. They want nothing to do with equities. Amazing what a month can do in this market. It seems like just yesterday that everyone loved stocks and it was bonds that were hated. Never a dull moment with Mr. Market.

So we’ll be watching this 2011 support as the big one. If we start breaking, equities are in trouble. Those of you looking to bottom fish $TUR for a trade, I think you will get the monster rally. When this thing turns it can potentially make your quarter. I’m keeping an open mind, but I only want to be long if we can stay above 2011 lows. As of right now, we haven’t see evidence of that yet. But a trade on the long side could be coming soon.

I think a nice heads up of a squeeze in Turkey would be a rally back above 0.25 in relative strength. This is a chart of Turkey relative to the S&P500. If this turns out to be a false break, we could get that squeeze higher. 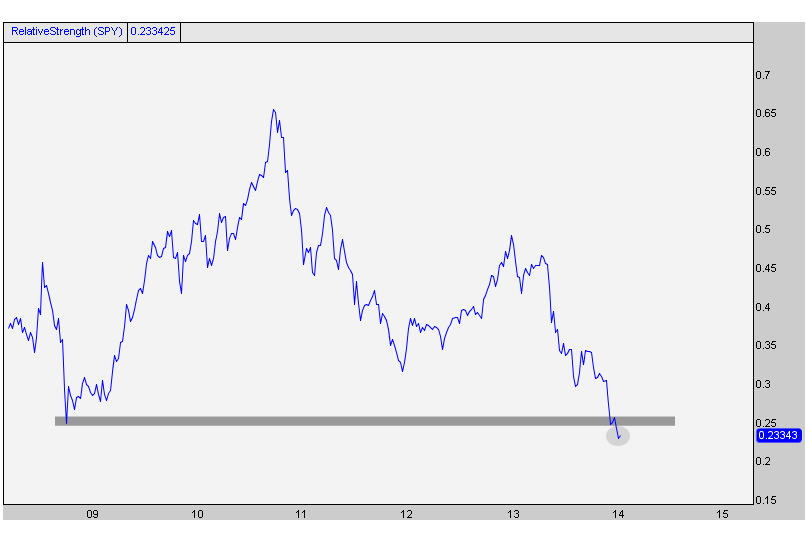 With that said, I want nothing to do with this ETF as long as we’re below 2011 lows in price under $40. This will continue to develop and volatility seems like it’s here to stay in $TUR. And with that volatility comes opportunity. Stay tuned…