END_OF_DOCUMENT_TOKEN_TO_BE_REPLACED

After a decade of underperformance, I guess we shouldn’t be surprised that European stocks keep struggling when compared to the United States. But I think it is worth noting that even after the monster rally in Europe during the second half of last year, the downtrend relative to the US got going again to start 2013.

With counties like Italy down over 7% year-to-date, Spain flat, Greece down, and the “quality” of Germany and France up barely 1% for the year, it’s no wonder the group is underperforming. Below is a chart of the European Top 100 Stocks vs the S&P500. The decade plus long secular downtrend in this pair seems to be continuing into the new year: 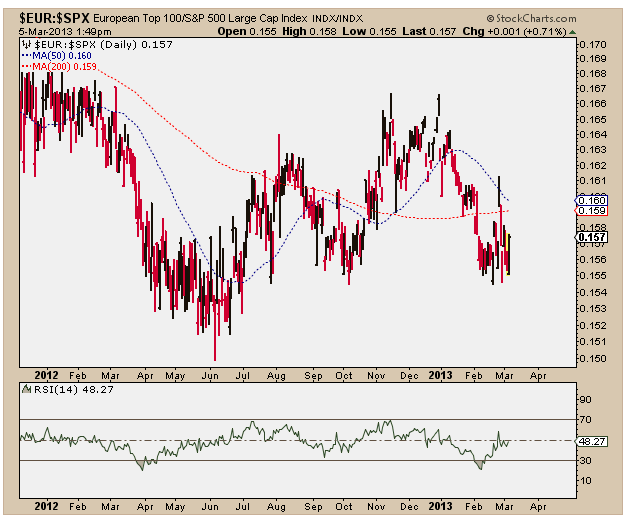 I can’t help but notice how even in the midst of all of that strength in the second half of last year, the relative strength index (RSI) never reached overbought conditions. This is more evidence that the downtrend in European stocks relative to the United States is still intact.

It looks to me like fresh lows are in store here and rallies need to be faded. The weakness in stocks is definitely coming out of Europe.