Although Turkey has already rallied 25% from the January 20th lows, the weight of evidence suggests this may be the start of a much larger move to the upside on an absolute and relative basis.

Structurally Turkey has been in a downtrend since a failed breakout near its all-time highs of 77.50 in early 2013. In August of 2015 prices broke below long-term support at 40 and have since been building a multi-month base below that level. Last week prices were able to break and close above it, while also closing above the downtrend line from the 2015 highs. 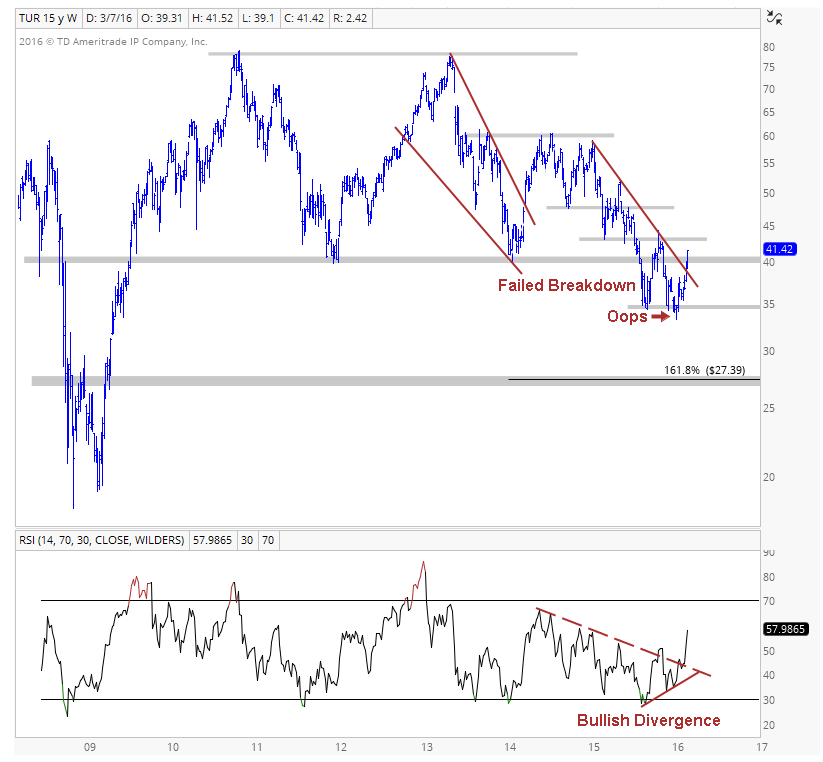 While many people have been focused on long-term support near 27 as the next downside price target in this market, the confirmation of this breakout above 40 and bullish momentum divergence suggest its now appropriate to approach this market from the long side. I’ve outlined some potential resistance at 42.75 and 47.50, but as long as prices remain above 40 on a closing basis, this market could ultimately retrace the length of this downtrend and retest the 2014 highs near 60.

The daily chart provides a more tactical view of January’s failed breakdown below the August lows that sparked the recent mean reversion. This sharp move to the upside allowed prices to close above the downtrend line from the May highs, as well as the 2014 lows. Although prices are extended in the short-term, the fact that momentum transitioned into a bullish range by hitting overbought conditions provides additional evidence that buyers are taking control of this market. 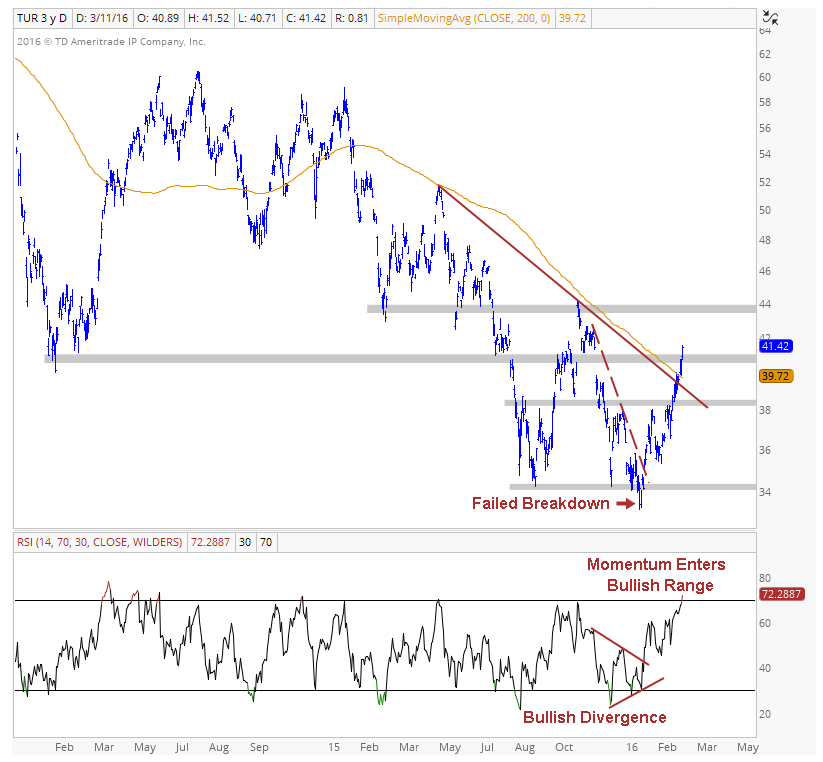 Tactically we’ve hit our upside price targets, so we’d now like to see prices consolidate between 40.50 and 43.50 in order to allow the 200 day moving average to flatten and begin rising. If/when that occurs we can look to re-enter on the long side at a more optimal risk/reward.

In addition to the breakout that’s occurred on an absolute basis, the four year daily chart of TUR/SPY suggests we’re in the early stages of a massive breakout relative to the S&P 500 as well. 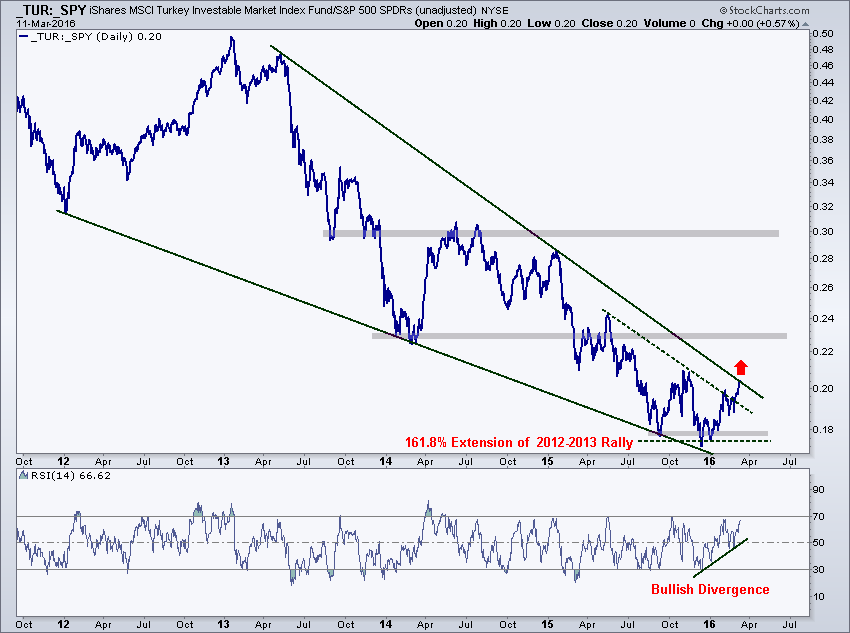 This ratio met its downside price target of the 161.8% extension of the 2012-2013 rally late last year and has been basing above the lower trendline of this falling wedge ever since. The brief failed breakdown below the September lows and bullish momentum divergence sparked a move to the upside, with prices now testing the upper trendline of this four year pattern. We want to be aggressively long this ratio if it closes above this downtrend line. This means that for every dollar we’re long TUR, we want to be short an equivalent dollar amount of SPY.

Price targets for falling wedge patterns are typically defined by the full-length of the wedge, suggesting that a resolution to the upside could result in a 140% rally in this ratio over the next few years. With that being said, I’ve outlined some other areas of resistance where it may be appropriate to take profits or re-evaluate the position based on your individual process.

The Bottom Line: Many global equity markets have experienced extensive moves to the upside following their January lows, but the weight of evidence in many markets like Turkey suggests that further upside may be ahead in the weeks and months to come. Although extended in the short-term, Turkey looks to be in the early stages of a much larger structural move to the upside on both an absolute and relative basis.

From a structural perspective, we only want to be long this market as long as we’re above long-term support at 40 on a weekly closing basis.

From a tactical perspective, we want to be patient and look to enter after prices consolidate and allow the 200 day moving average to begin rising.

On a relative basis, we only want to be long if the TUR/SPY ratio is above the downtrend line from the May 2013 highs.

JC here – it’s hard to argue with the weight of the evidence on this one. We liked Turkey on the long side after putting in that failed breakdown in January but our tactical upside objectives were hit last week. While there is little reason to be aggressively long here short-term, I do love the developments from a structural perspective. $40 has been our line in the sand for a long long time. By the way, $40 also represents the 61.8% Fibonacci retracement of the 2008-2010 rally. Holding above that is a big deal. I agree with Bruni, the risk/reward long-term here is definitely in favor of the bulls

For updates on these Turkey charts, plus over 300 more, become a Premium Member of All Star Charts.