I’m not sure if you guys noticed what’s been going on in Small-caps over the past couple of weeks, but I think it’s worth pointing out. First of all, remember this has been a tremendous leading indicator for a long time. I was pounding the table in November about that historic breakout when the Russell2000 Futures engulfed the prior 18 weeks. That was nuts. I said then that we would likely be talking about that event for decades to come. More recently I pointed out the fresh breakout after a period of consolidation. Each of these came along with stocks as an asset class in a healthy environment. They’re in an uptrend and they’re all in one together. Small-caps have been a great tell for the trend of the markets. If you’ve been bearish or not as long as you should have been, it’s probably because you haven’t taken the Russell2000 seriously enough.

What we’re seeing right now appears to be a healthy consolidation within an ongoing uptrend. Chart observers might call these “Bull Flags”, because they actually look like a flag on a flagpole. After the shorts got their faces ripped off the past 2 months, that rally looks exactly like a flagpole. The tight range that ensued appears to be the flag itself. Technicians give funny names to patterns. It’s a thing. Anyway, historically these are often the mid-points of the entire move. So the presumption is a repeat of the rally that got us here from early August. This is what it looks like currently: END_OF_DOCUMENT_TOKEN_TO_BE_REPLACED

I’m back from a 2-week trip to Asia and it’s almost like nothing has changed. Stocks are hitting all-time highs, so many people are trying to be cute calling for a top and the gold bugs are angry. The difference is that now the Small-caps have finally broken out of a 10-month base to new all-time highs. This goes for the Small-cap Russell2000 Index, S&P Small-cap 600 Index and the Russell Micro-cap Index. These indexes have done nothing in almost a year. Can you imagine the nerve of some people to call the US Stock Market “Stretched” or “Too far too soon” (whatever that means), when some of the most important indexes are just now breaking out of 10-month bases? Too far too soon? They’ve gone no where for 10 months? Are you kidding me?

It’s like I’m talking to a wall sometimes. Too Stretched? Are we looking at the same market? END_OF_DOCUMENT_TOKEN_TO_BE_REPLACED

END_OF_DOCUMENT_TOKEN_TO_BE_REPLACED

Here is what I think we need to keep in mind with each of the major Indexes. We’re using only bar charts today in order to put extra emphasis on price for this particular exercise: END_OF_DOCUMENT_TOKEN_TO_BE_REPLACED

END_OF_DOCUMENT_TOKEN_TO_BE_REPLACED

Over the last few weeks I’ve been getting an unusual amount of emails about a head and shoulders pattern in the small-cap Russell2000 Index. I think today is as good a time as ever to address this possibility.

First of all, the Russell2000 has to be considered to be in an uptrend until it starts to make lower lows. We don’t have that yet. But here is the daily chart showing what some chart readers might call a potential head and shoulders topping pattern. I want to reiterate that this is just a potential pattern since confirmation does not come until the neckline is broken. 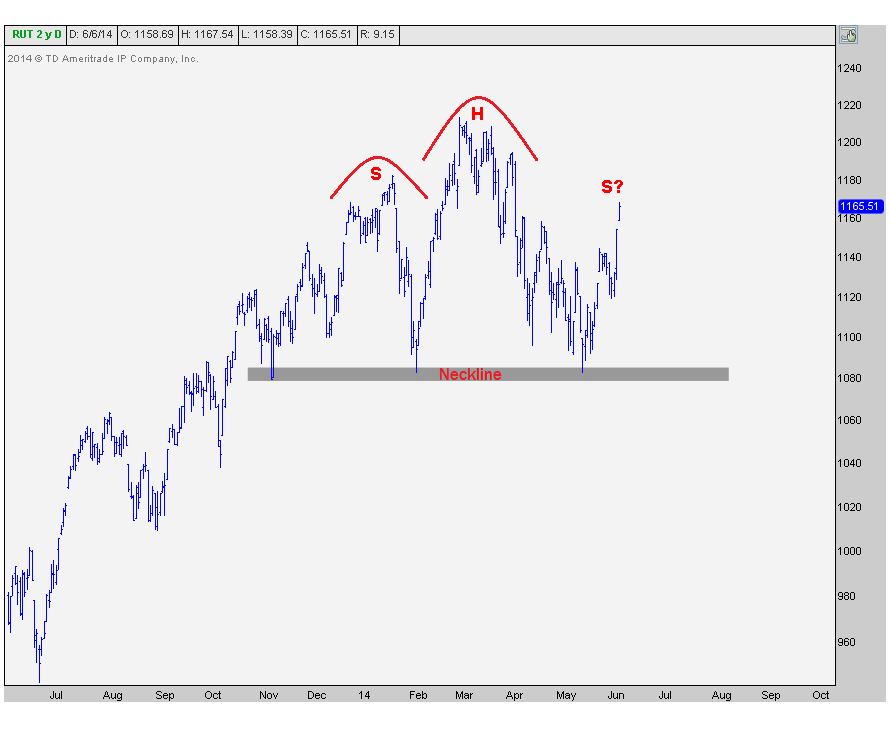 We can see the shape of this formation taking place with the left shoulder in January, Head in March and the “right shoulder” is being put in as we speak. All of this is only worth discussing at a cocktail party, and there’s no reason to act on it until the neckline around 1080 is broken.

Now if this is a major topping pattern, does it come at a logical area? Or is this just random resistance. I would argue that this actually is an area where we should expect at least some supply to show up. In fact, this area represents the 161.8% Fibonacci Extension from the entire 2007-2009 crash when the Russell2000 lost 60% of its value: 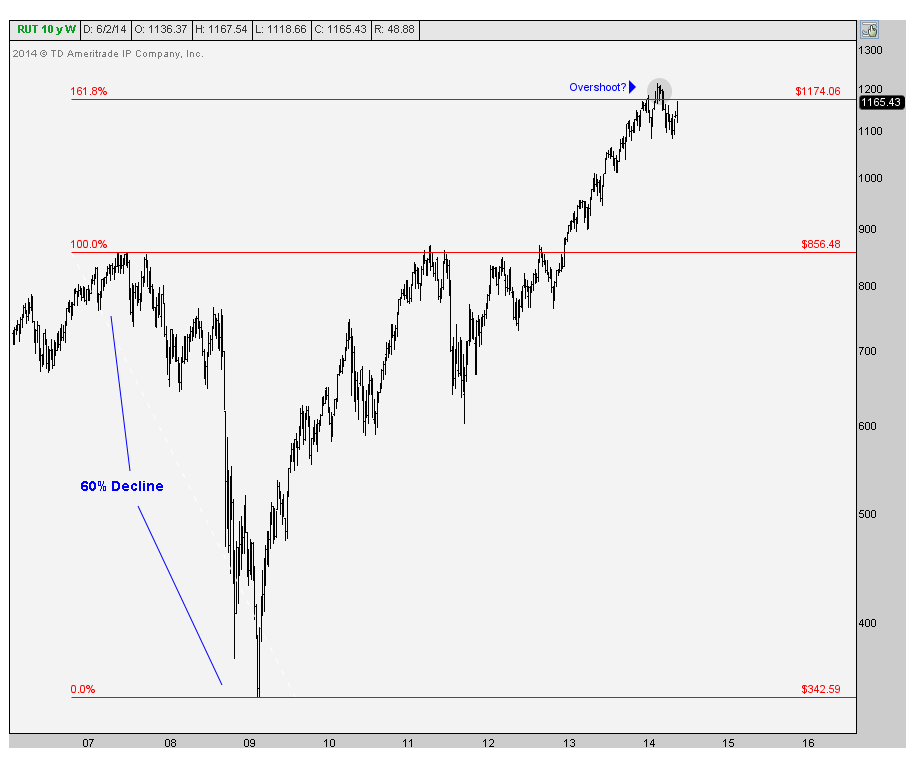 So is this is it? Is this the top? I have no idea. Until the pattern is completed, there’s really nothing to talk about. From a more tactical perspective, and less structural, I think a break below 1117 would be a big warning that a bigger break could be coming. So that’s what I’m watching right here.

On a relative basis, we’ve been hearing a lot about the underperformance of the Russell2000 compared to the large-cap S&P500. This chart shows the ratio of the two ETFs (IWM/SPY) bouncing off key support. This level represents the uptrend line from 2009. A break here below last month’s lows would be another warning of bigger problems to come. 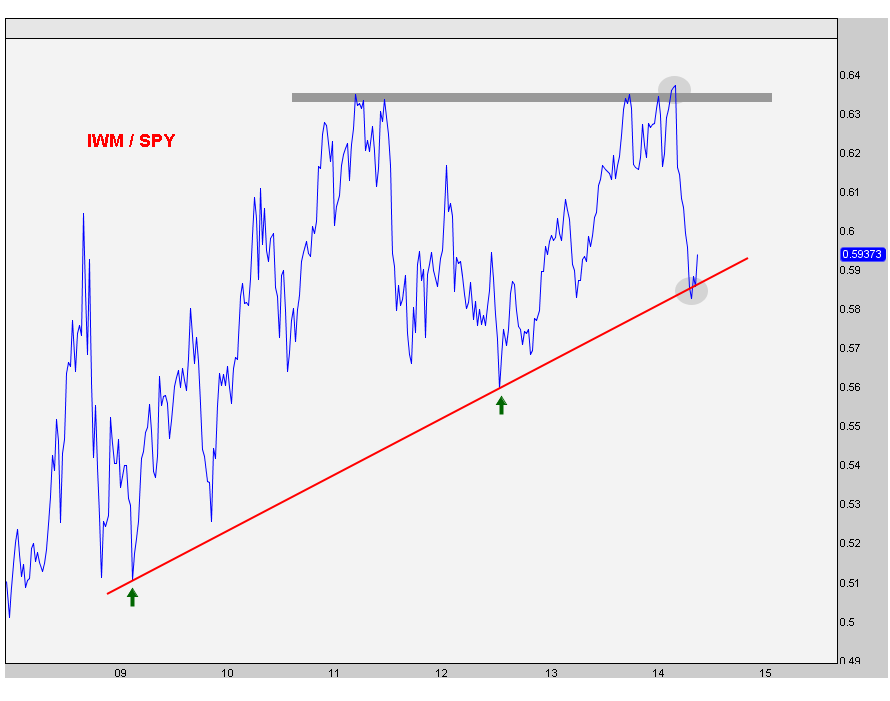 So I think these charts above all tell an interesting story. But there is little to act upon, as far as what I see. I’d prefer to be position elsewhere, at least for now. 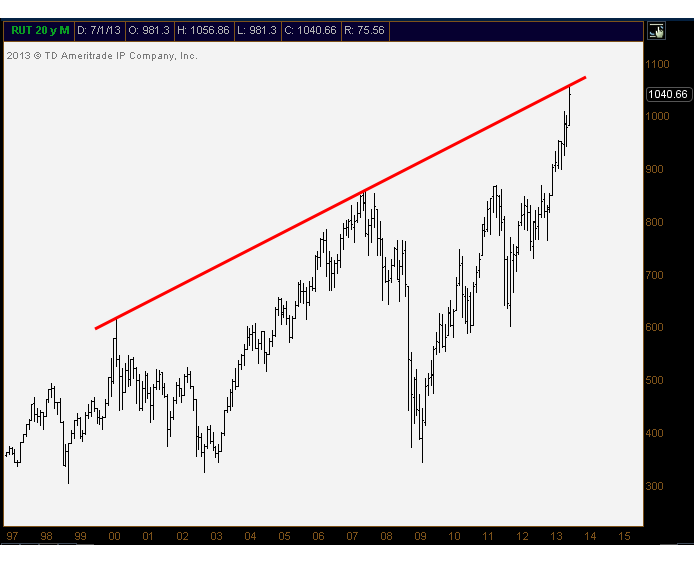 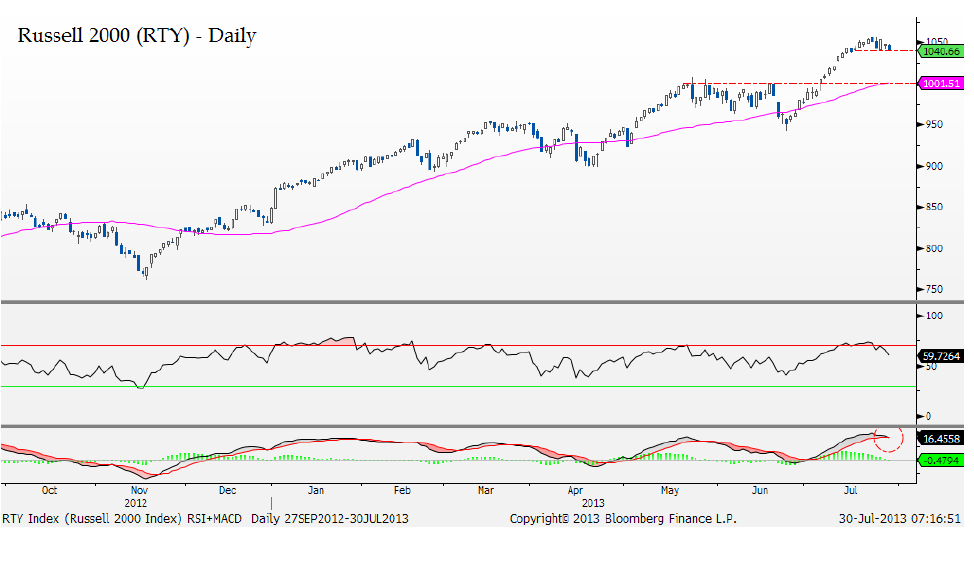 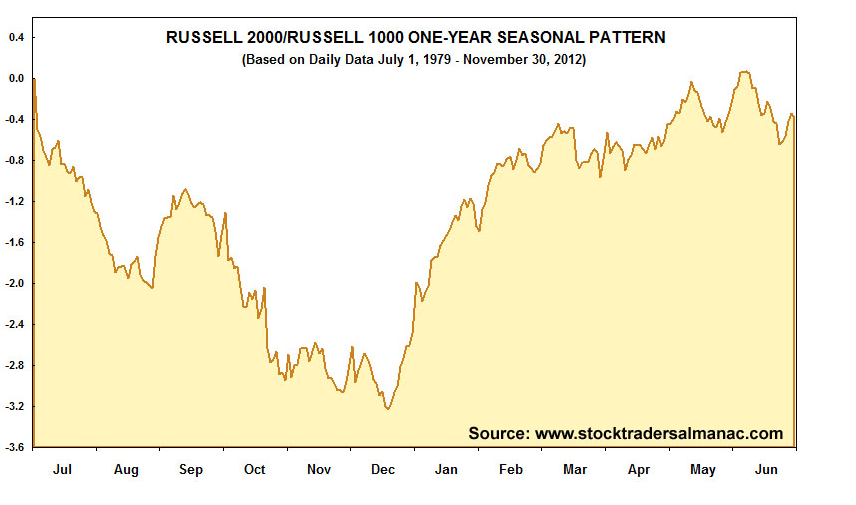