Jeff Hirsch has recently put out a must read book titled, “The Little Book of Stock Market Cycles”. In case you didn’t know, Jeff is the editor-in-chief of the annual Stock Trader’s Almanac. And if you don’t keep a copy of this almanac on your desk, I promise you’re at a huge disadvantage in the market.

Lucky for us, Jeff published a book where he really gets into all of the details behind the secular, cyclical, and seasonal trends that occur way too often to ignore. I wanted to share some of my thoughts with you guys because I think this is one of the best written and coolest books I’ve read in a long long time. 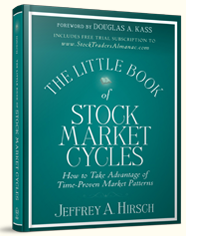 In the book, Jeff walks us through over a century’s worth of secular and cyclical bull and bear markets. “Being in a bull or bear market is the single greatest influence on stock prices”, says Hirsch. From the Panic of 1901 all the way through the recent global financial crisis, sub-prime mortgage fiasco and everything in between. He details the inflationary impacts from all of the Wars and the ensuing bull markets that came as a result. For example, “The Dow has never achieved a lasting high during wartime”. Inflation (CPI) rose 110% during WWI and was followed by a 504% rise in stock prices throughout the roaring 20s. During WWII inflation rose 74%, which preceded a 523% rise in the Dow. In the Vietnam era, the inflation of the 1970s came just before the monster bull market that got going in the early 80s.

Jeff goes on, “War, peace, and inflation have an incredible impact on the stock market. They are the foundation of the cycle of boom and bust and of secular bull and bear markets”. He believes that once this secular bear market that we’re in is complete, we could see another 500%+ rise in the stock market that could take us to 38,820 in the Dow Jones Industrial Average by some time around the year 2025. As hard as that might be to believe, this number represents an average gain of just 8.6% per year. This is well within historic annual gains for US stocks. 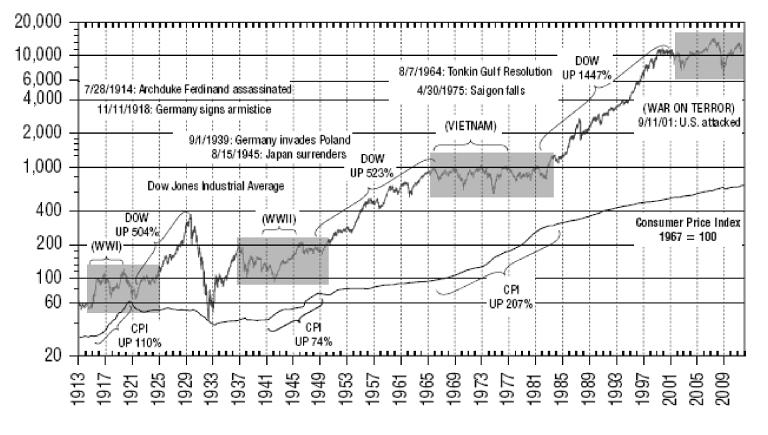 The Presidential Cycle is another fascinating part of the annual almanac and is explained really well in the book. The greatest gains can be noticed in the 3rd years, or “Preelection Years”, while the weakness is seen in the first two of the traditional four-year term. Since Andrew Jackson, the last two years of the cycles have produced a total net market gain of 724%, dwarfing the 273% gain of the first two years of the administrations. That can’t be ignored. Also, since 1949 the greatest gains are seen when there is a combination of a Democrat as President and a Republican Congress (19.5% annual avg gain).

Within the year, there are some incredible seasonal trends. The six month switching strategy might be the most amazing market statistic that I’ve ever seen. We’ve talked about this before, but I think it’s worth mentioning again: Owning the Dow Industrials from November through April and sitting in cash for the other 6 months. A compounding $10,000 investment in 1950 performing this simple task would have returned $674,073. If you had done the opposite and owned the Dow from May through October and sat in cash from November through April, you would have actually lost $1,024. Crazy.

Taking it one step further, the Nasdaq actually has an eight month run from November through June. “A $10,000 investment in these eight months since 1971 gained $384,337 (as of May 31, 2012) versus a loss of $3,196 during the void that is the four-month period July to October”. These are some amazing numbers. It’s mind-boggling to me that some people choose to ignore this stuff.

The seasonality analysis continues with all of our favorite late December and early January tendencies. This is another major topic that we like to cover here on the blog. From the “January Effect”, to the “Free Lunch” strategy, to the annual “Santa Clause Rally”, there’s a lot going on this time of the year. But the most amazing to me of all of them is the January Barometer. Devised by Jeff’s father Yale Hirsch in 1972, this indicator has an unprecedented 88.7% accuracy rate since 1950. Essentially, as goes the S&P in January, so goes the year: “Every down January since 1950 was followed by a new or continuing bear market, a 10% correction, or a flat year. Down Januarys have been followed by substantial declines averaging -13.9%”. On the other hand, a year where you get a combination of a Santa Clause Rally, a positive first 5 days of the year and an up January has only occurred 27 times in the last 63 years. Full-year gains followed in 24 of those previous 26 occurrences. And it appears as though 2012 will make it 25 of 27. The S&P500 has gained an average of 17.5% in these years.

I can go on and on, but I think you get the point. We know that Jeff Hirsch does an amazing job every year with the Almanac and his blog. But The Little Book of Stock Market Cycles brings it all together in an easy to read format. Well done Jeff.