Here is what I think we need to keep in mind with each of the major Indexes. We’re using only bar charts today in order to put extra emphasis on price for this particular exercise: END_OF_DOCUMENT_TOKEN_TO_BE_REPLACED

It’s not just about the Dow and the S&P500 ladies and gentlemen. Let’s not ignore the legend that is the S&P MidCap 400 Index. Until just a few weeks ago, MidCaps were the best performers year-to-date of all of the major US averages. Through most of May, the MidCap 400 was still outperforming the Dow Jones Industrial Average, Nasdaq100, S&P Small-Cap 600 and the Russell2000. But now we’ve arrived at some critical levels.

We’ll use the $MDY – SPDR MidCap 400 ETF just to keep things simple. Here’s what I see: all throughout April and early May this 209-210 level was major resistance. We saw various tests which showed us huge evidence of overhead supply. Once that supply dried up, midcaps rallied a cool 6% in 3 weeks. That’s a big move: 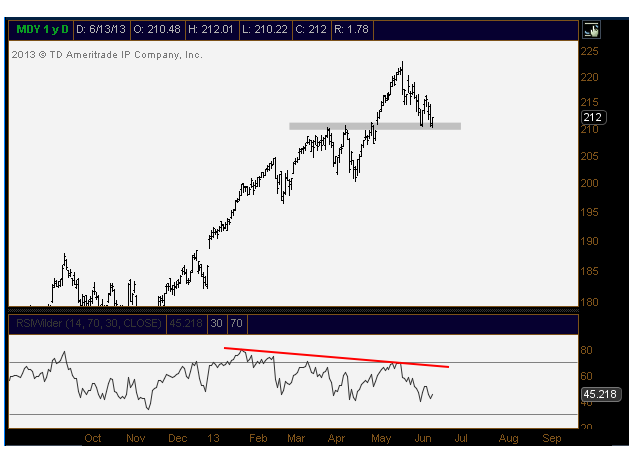 Now, all in theory of course, former resistance should become support on the way down. Last week, this polarity proved itself to be valid as the buyers showed up nicely. But this week, we’re down here again. Will the buyers show up once more?

Here’s the problematic development that I see. When midcaps broke out to make new highs last month, the relative strength index never confirmed. We saw lower highs in RSI without any overbought conditions as prices went on to make new highs. We don’t like that very much.

So I would say that any break below those key lows and it would probably make sense to short against it. But for now, as long as prices remain above those 209-210, we need to give the bulls the benefit of the doubt. This looks like a big battle ground area from where I’m sitting. Take a look at the $MID Index itself and you’ll see the same thing.

The resolution here should be an important one. Stay tuned…

As is tradition here on allstarcharts, let’s go over a few of our favorite January indicators to see if we can draw any conclusions from the results. At the end of December, I put up a post titled, What Does January Mean to You? where we discussed each of them in detail. Here is a recap along with the stats – short and sweet:

The January Barometer – As the S&P500 Goes in January, So Goes The Year. When the month of January records a gain, as measured by the S&P500 Index, history suggests that the rest of the year will serve as a benefactor, and finish in the black as well. Since 1950, this indicator has an incredible 88.7% accuracy ratio. This number also includes 2012, as January closed the month up 4.35% and the S&P500 finished positive for the year.

First Five Days in January Indicator –  This one has a very nice track record as well. The last 40 UP first five days of the year have been followed by full-year gains 34 times for an 85% accuracy ratio. This includes 2012 which had a 1.8% rally in the first 5 days. The average gain for the first 39 of those years was 13.6%. 2012 closed up right around that number as well. The results are less reliable when the first 5 days in January are negative, showing just a 47.8% accuracy rate and an average gain of 0.2%. Going forward, I think it’s important to note that the S&P500 posted a gain for the first 5 days of the year in just 6 of the last 15 Post-Election Years.

The January Barometer Portfolio – The Standard & Poors top performing industries in January tend to outperform the S&P500 over the next 12 months. According to Sam Stovall, if on Feb. 1 you invested equally in the 3 sectors that posted the best returns in the month of January and held them until Feb. 1 of the following year, you would’ve received a compound rate of growth of 8% as compared with 6.6% for the S&P 500. If you bought the worst performers in January, you would’ve underperformed the market with a 5.5% return. Since 1970, the compound rate of growth for the 10 best-performing sub-industries based on their January performance was 14.4% as compared with 6.8% for the S&P 500, and 4% for the worst 10 sub-industries in the S&P 500 in that January. The best-performing sub-industries in January went on to beat the market in the subsequent months 69% of the time, so nearly 7 out of every 10 years. The worst performing groups outperformed the S&P only 38% of the time. This indicates to us that you’re better off sticking with the winners rather than the losers.

The January Effect – As we mentioned in our December 6th Post, “It’s Game Time for Small-Caps”, there is a tendency for Small-Cap stocks to outperform Large-Caps in the month of January. There are plenty of theories about why this is the case, but as a lot of us already know, this phenomenon now begins in mid-December. The stats don’t lie: from 1953 to 1995, small-caps outperformed large-caps in January 40 out of 43 years. But the shift into the mid-December starting point really got going after the 1987 crash. This year, however, the Russell2000 actually began outperforming the Larger-Cap Russell1000 in mid-November. So the results here should be interesting to look back on.

S&P600 Small-Caps finished January up 5.72% compared to the Large-Cap S&P500 up 5.04%. Russell2000 Came in up 6.2%. But as mentioned above, the Small-cap outperformance started long before January, as has been the case in more recent years.

January is the NASDAQ’s Top Performing Month – Since 1971, the total percentage gain for the Nasdaq Composite in January is an unbelievable 115.2%. If you take the rest of the 11 months combined during that period, the rest of the year has averaged just 30.1% (1971-2011). 2012 was no different as the Nasdaq Composite gained 8% for the month of January and is up just about 6.6% since then.

The Nasdaq Composite finished January up 4.06% even with $AAPL down over 14% for the month.

And there you have it folks. Another January in the books.

Unfortunately, history doesn’t speak too favorably for February in terms of seasonality, especially in post-election years.