I’m not sure if you guys noticed what’s been going on in Small-caps over the past couple of weeks, but I think it’s worth pointing out. First of all, remember this has been a tremendous leading indicator for a long time. I was pounding the table in November about that historic breakout when the Russell2000 Futures engulfed the prior 18 weeks. That was nuts. I said then that we would likely be talking about that event for decades to come. More recently I pointed out the fresh breakout after a period of consolidation. Each of these came along with stocks as an asset class in a healthy environment. They’re in an uptrend and they’re all in one together. Small-caps have been a great tell for the trend of the markets. If you’ve been bearish or not as long as you should have been, it’s probably because you haven’t taken the Russell2000 seriously enough.

What we’re seeing right now appears to be a healthy consolidation within an ongoing uptrend. Chart observers might call these “Bull Flags”, because they actually look like a flag on a flagpole. After the shorts got their faces ripped off the past 2 months, that rally looks exactly like a flagpole. The tight range that ensued appears to be the flag itself. Technicians give funny names to patterns. It’s a thing. Anyway, historically these are often the mid-points of the entire move. So the presumption is a repeat of the rally that got us here from early August. This is what it looks like currently: 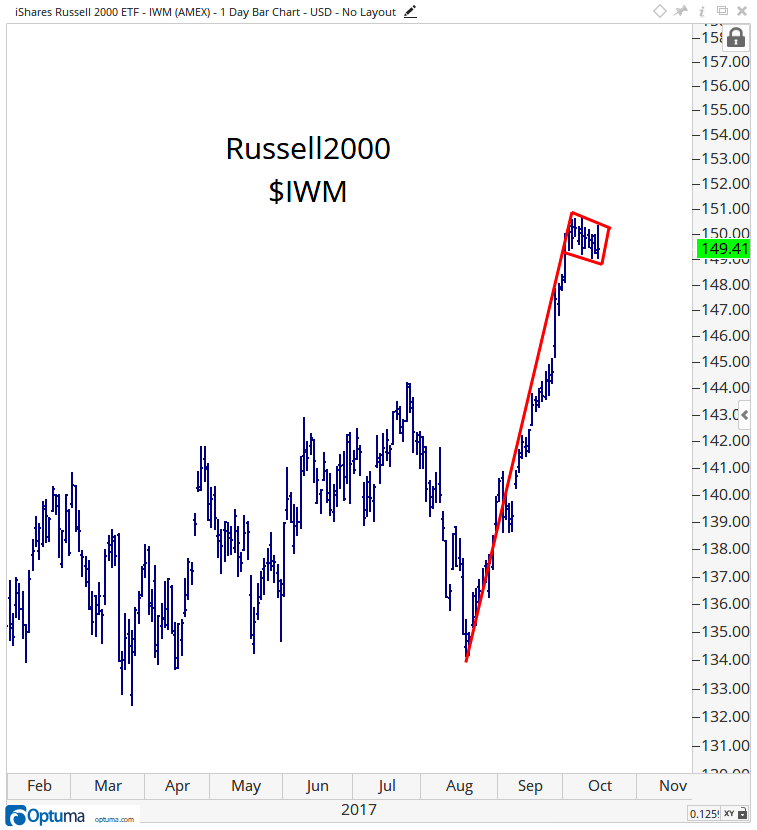 We are looking for an upside resolution to this consolidation. These patterns are high and tight, like a military fade. A breakout above the upper end of the range this month would confirm that this is what it appears to be. We not only want to stay long, but we want to be adding to positions. I still think the Russell2000 gets above 1700, or 14% higher than current levels. That has not changed. The ETF equivalent for $IWM has been a $170 target. I see no reason to change that.

I still do not think this is the time to be conservative. I firmly believe we want to be pressing longs.

I’ve laid out a long list of stocks (Premium Members see Here Here and Here) to take advantage of this uptrend. I don’t see anything, yet, to suggest changing our approach. To the contrary, everything we’re seeing is confirming what we’ve already been noticing. The current action was to be expected. When something unexpected happens, then we’ll reevaluate the situation and act accordingly. But that hasn’t occurred. In my opinion, there is no reason to be taking the foot off the pedal.