The Nasdaq 30 is an equally-weighted index that I created which consists of the 30 largest stocks in the Nasdaq. Collectively these 30 companies represent over half of the entire market capitalization of the Nasdaq Composite. So just like the Dow Jones Industrial Average is a good gauge of stock market strength, I feel that my Nasdaq30 Index offers similar insight but for different types of companies.

Today we’re going to do a deep dive into these 30 Nasdaq stocks. As always I walk through them on both weekly and daily timefames. We want a longer-term structural perspective and then break things down to more tactical time horizon for execution purposes. Then we look at them collectively to weigh whether there is more good or more bad so we can make better, evidence-based decisions.

Here are a few things that stood out to me:

END_OF_DOCUMENT_TOKEN_TO_BE_REPLACED

Here is the video in full (audio begins immediately, video gets going after 30 seconds)…..Enjoy! END_OF_DOCUMENT_TOKEN_TO_BE_REPLACED

Momentum is a word that gets thrown around a lot. I personally like to measure momentum using a 14-period relative strength index (see here), but different people have different definitions. Fine. For today, we’ll argue that “momentum” stocks are those listed in the MSCI USA Momentum Index. Looking at these stocks as a group, I think they are going to continue to get destroyed going forward, particularly relative to the rest of the market.

First of all, forget this whole FANG thing. I don’t know who made that up or why people like to limit it to just 4 stocks. I think it’s stupid. They have nothing to do with one another and there should be others included in the list. In fact, in November I wrote a piece about how FANG stocks are this cycles Four Horseman (See here) and was further evidence at the time that made us very bearish U.S. Stocks heading into December and January. That obviously worked out very well. END_OF_DOCUMENT_TOKEN_TO_BE_REPLACED

I don’t know what’s going to happen tomorrow or next month or next year. No one does. But today I just want to keep it real and bring up an interesting development that is difficult for me to ignore. It’s no secret that the stock market currently has terrible breadth as only a handful of names were able to make new highs a couple of weeks ago and the only index to make a new high was the Tech-heavy large-cap Nasdaq100. The rest of them all put in lower highs (which is characteristic of a downtrend).

As the cliché goes, “This is a market of stocks, not a stock market”. But cliché or not, it’s true, and also under appreciated. When the market as a whole is making new highs, you want to see that being confirmed by a larger number of stocks and sectors also putting in new highs. The last thing you want to see is the opposite, as we are seeing today (and in the Fall of 2007 coincidentally?). If you recall, as the major averages were hitting new highs in October of 2007, only a few individual stocks were still hitting new highs. A popular group of those were being referred to as “The Four Horsemen” at the time as they were some of the only names still holding up. This group included, Google, Apple, Amazon and Research in Motion (Blackberry).

I remember this time very clearly as there was an ongoing joke at work that if you weren’t trading these 4 names, why bother even coming in? This is strictly anecdotal, of course, but an interesting coincidence that the media is constantly referencing a new group of stocks called “FANG”. The label for this group may not have been made up yesterday, but the frequency of mentions continues to grow. The FANG stocks include Facebook, Amazon, Netflix and Google. The question I pose today: Is FANG this cycle’s Four Horsemen?

I don’t know the answer and neither does anyone else reading this right now. But I find it very difficult to ignore the similarities between these two groups of stocks. Remember, like the 4 Horsemen, these FANG stocks have nothing to do with each other. Sure, they’re in the Internet space. They are each part of the Dow Jones Internet Index which is the only sector I see still hitting new highs recently (I guess Twitter’s stock must have not gotten the memo).

Take a look at each of the FANG charts. Then take a look at how many stocks are hitting new highs compared to how many were doing so a year or ago and a year before that. Compare this lack of participation sort of environment to that in 2007. Also look at the opposite scenario in the first quarter of 2009, where most stocks and sectors had already bottomed out in the 4th quarter of 2008. The “Market of stocks”, if you will, bottomed out in Q4 2008. It wasn’t until March of the following year that the indexes themselves put in their ultimate lows. To me we are looking at the opposite scenario today.

What do you guys think? Am I way off or perhaps on to something here?

Click Here for full access to my research. Feel free to look through our different packages. There’s a weekly research report here for everyone depending on your goals and approach to the market.

Long time readers know that I like to look at a lot of different markets, asset classes and sectors. Spending hours and hours every week searching far and wide for strength, weakness, key reversals, large bottoms, healthy consolidations, etc is something that I could never put a trade on without completing first. I would be doing our investors, and myself, a disservice by not positioning ourselves in ONLY the most favorable risk/reward opportunities.

Today I want to focus on this monster breakout in the Internet sector. More specifically, I am referring to the First Trust Dow Jones Internet ETF $FDN. After an explosive rally since the late 2011 lows, prices have consolidated these 100% returns in a very healthy pattern well-defined by converging trendlines. Here is a weekly candlestick chart showing, what I consider to be, an upside resolution to this digestion of huge gains: 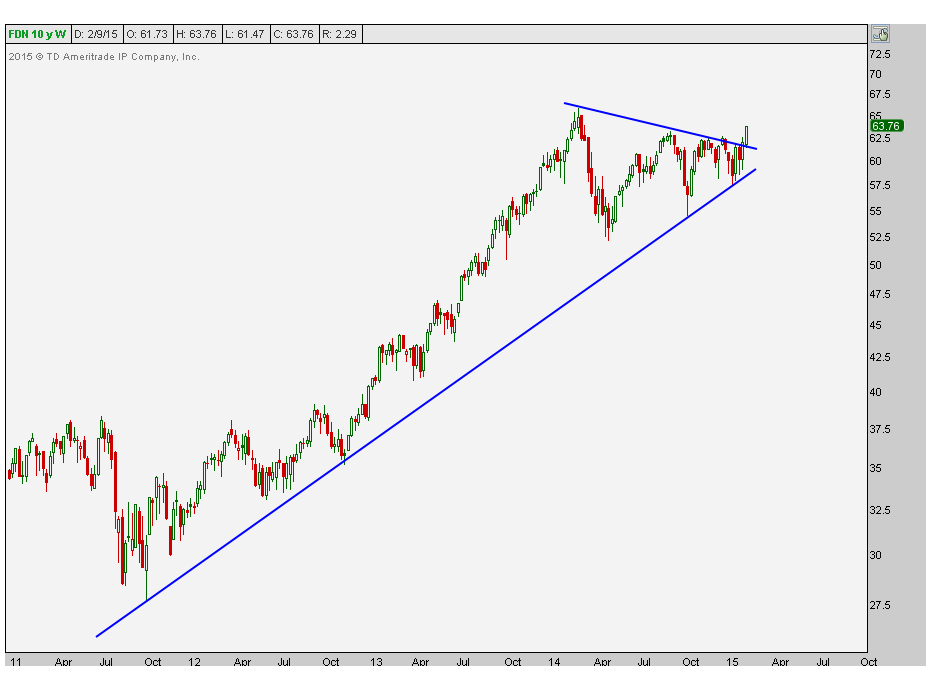 Looking shorter-term, here is a daily candlestick chart showing prices, not only breaking out above the upper of the two converging trend lines since the all-time highs early last year, but also above overhead supply since September: 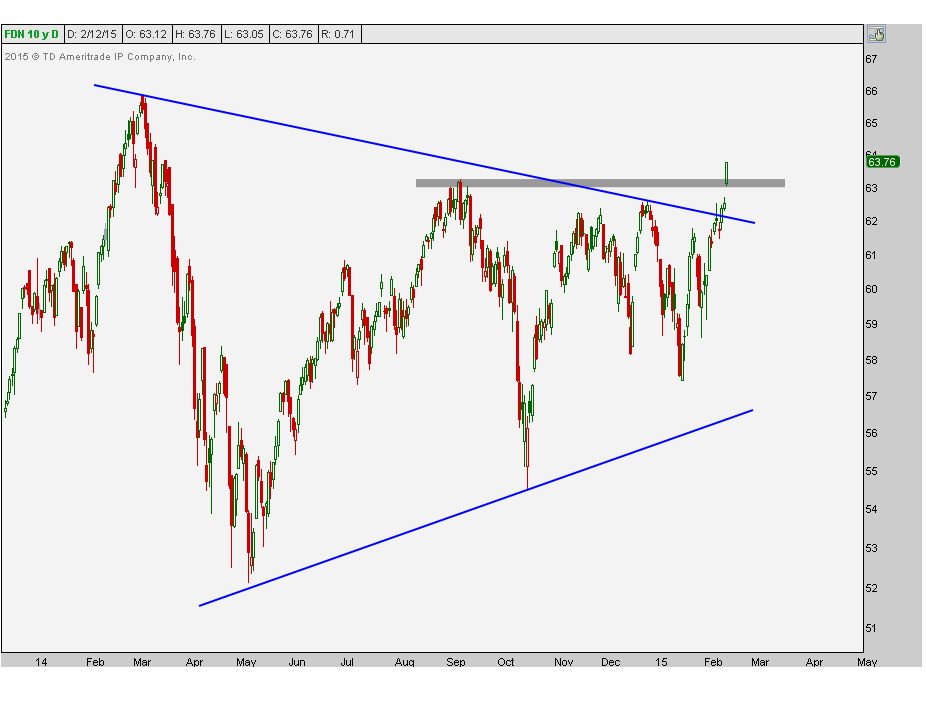 This is a name we only want to own above this breakout level. The key drivers of this ETF are, obviously, the “Internet” stocks like Amazon, Facebook, Ebay, Google, Priceline and Netflix who alone represent over 40% of this fund.

REGISTER HERE to receive weekly updates on these charts above as well as 30 other sectors and sub-sectors on multiple timeframes. Also feel free to look through Eagle Bay Solutions for our other products that may fit your needs.