END_OF_DOCUMENT_TOKEN_TO_BE_REPLACED

All of the 30 Dow Components have just been updated in the Chartbook, and here are my notes on the results: END_OF_DOCUMENT_TOKEN_TO_BE_REPLACED

When I read about the Telecom sector or speak with colleagues about it, I find many people often think of it as a collection of companies with strong balance sheets, great cash flows, and shareholder friendly actions like juicy dividends and share buybacks. While that may be true in many cases, that doesn’t necessarily mean that the sector can be utilized as a bond proxy to boost a portfolio’s yield. As we saw in recent years with sectors exposed to high-yield, and MLPs, there’s no such thing as a free lunch. In addition to that, simple math shows that Telecom hasn’t been correlated with bonds (TLT) at all over the past ten years, with the correlation being 0.29, 0.19, and 0.08 over the past one year, three years, and ten years, respectively.

If you had adopted the above philosophy, stuck this sector in your portfolio and hoped for the best, you’ve seen that END_OF_DOCUMENT_TOKEN_TO_BE_REPLACED

Late last week I was invited to come on FOX Business to talk about why I like Energy. The conversation temporarily shifted towards why I hate Technology, and my answer was simple. We are seeing the exact opposite action in both of these sectors. I like Energy because we’re seeing relative strength break out as prices hit new all-time highs. In Tech, we’re seeing relative strength break down as prices roll over.

Here’s what I mean. This is a weekly chart of Technology $XLK relative to the S&P500 $SPY. Look at all that support from 2009-2011 while momentum avoided hitting any oversold readings and remained in bull mode. Once $AAPL started crash (see here), it helped drag down the relative strength in this sector while momentum also hit oversold readings. This is a very bearish characteristic: 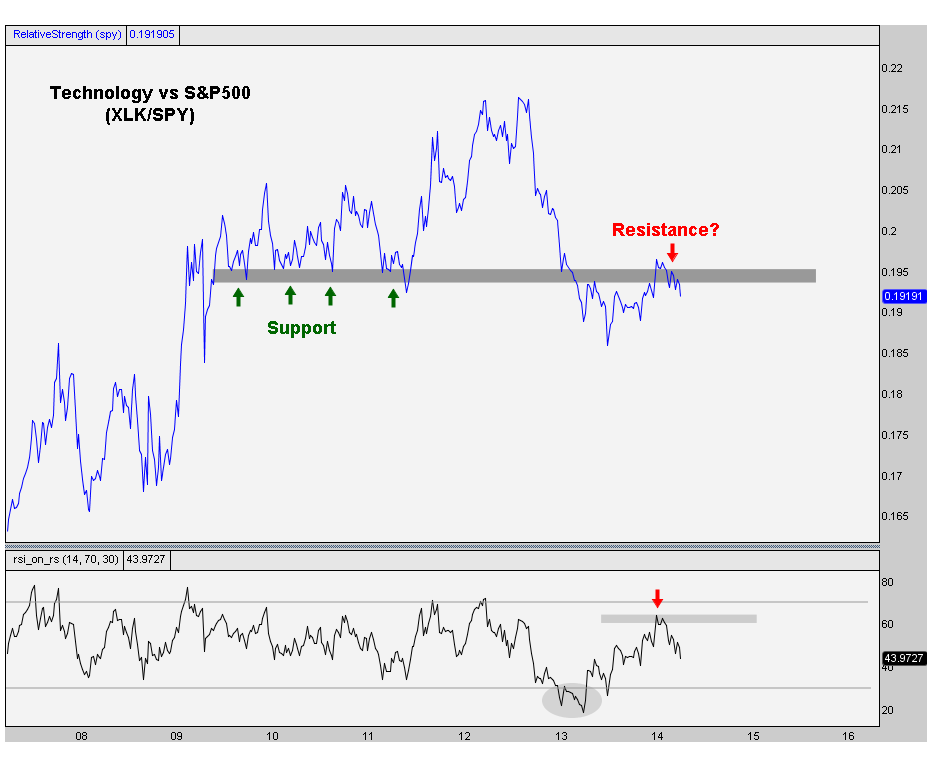 In the second half of last year, relative strength started to move higher but momentum failed to hit any overbought conditions rolling over in the 60s. This is text book bearish behavior. Meanwhile, prices of XLK/SPY are rolling over right around that former resistance from years ago. Our polarity principles tell us this is very normal as former demand has now turned into overhead supply.

For me to get back on the bullish train for Big Tech, we’re going to need to see that shaded area taken out. We really want to see the January highs in XLK/SPY taken out to the upside. I believe this is the lower probability scenario and would expect Technology to continue to underperform going forward.

This is not an area where I want to be as it tends to be a much more early cycle sector. I would prefer to be in late cycle sectors like Energy. If the data changes, I will certainly keep an open mind and adjust accordingly. But we have to react to what is currently in front of us, and it’s just not tech. I’d stay away or stay short. 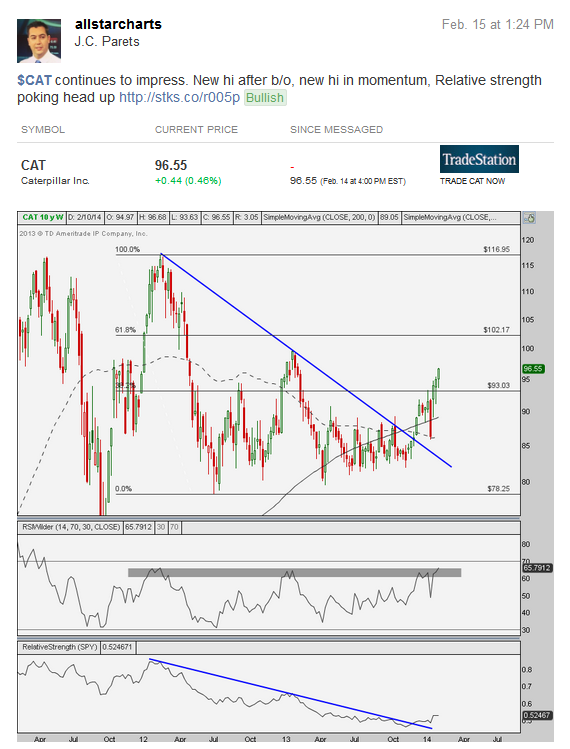 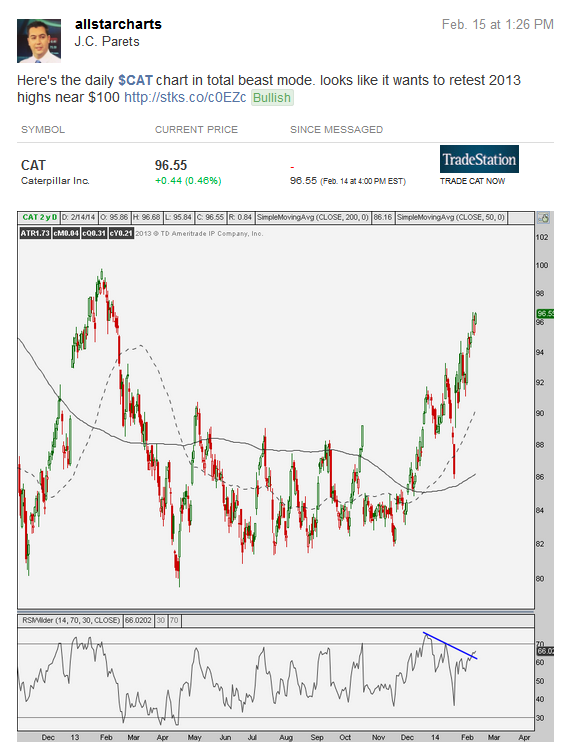 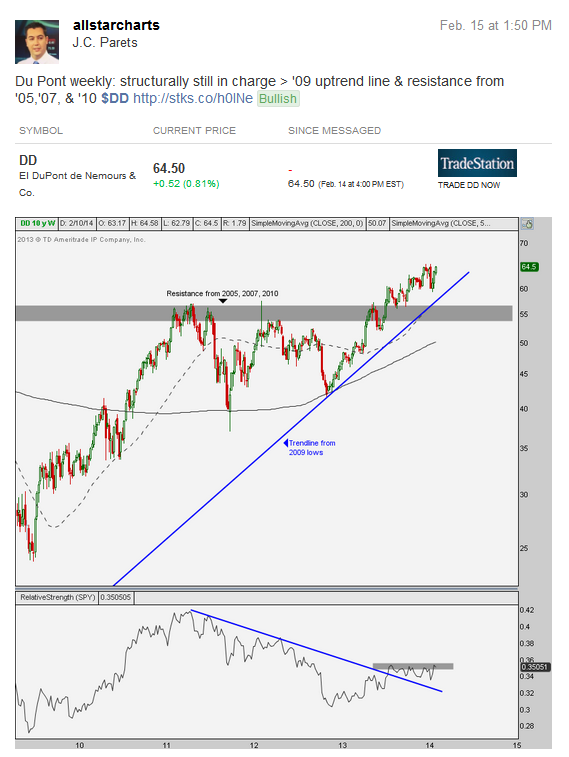 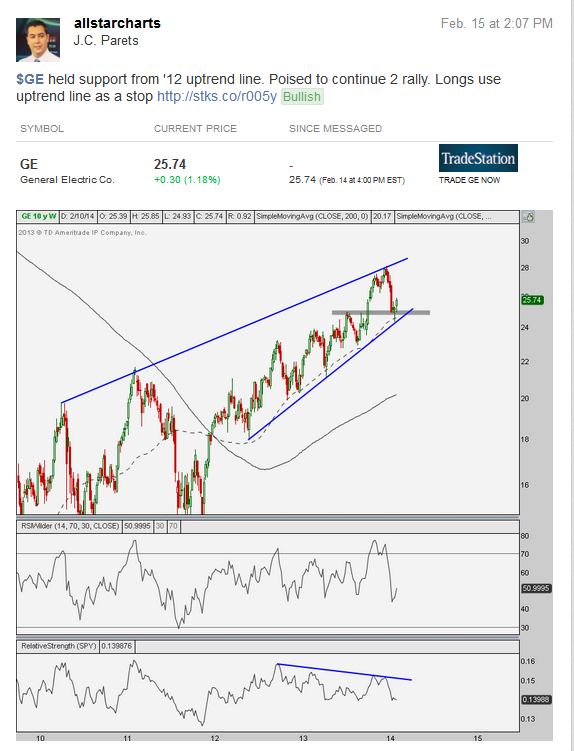 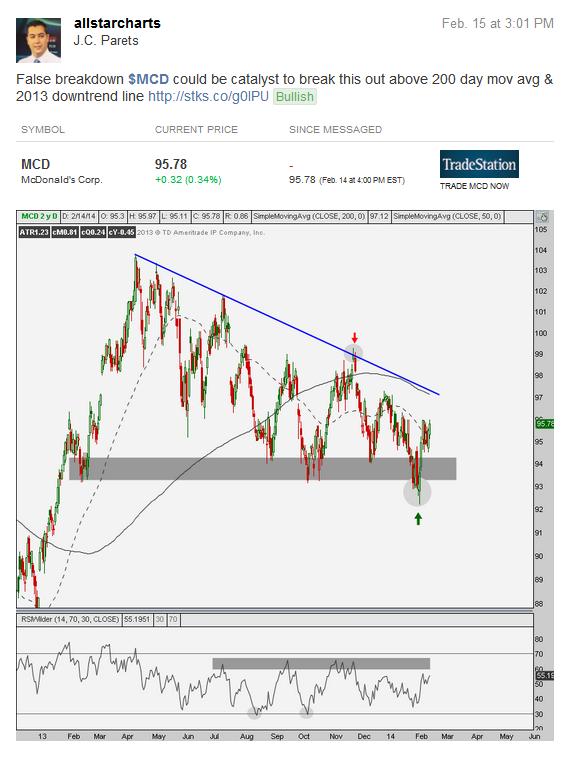 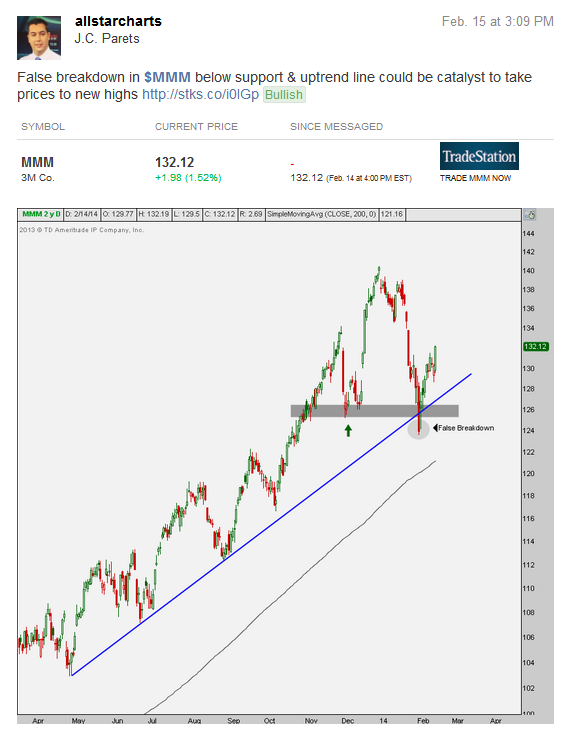 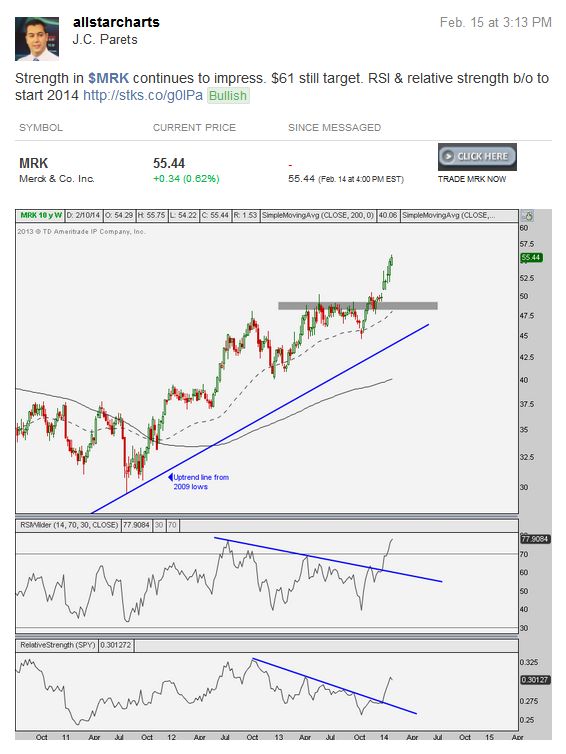 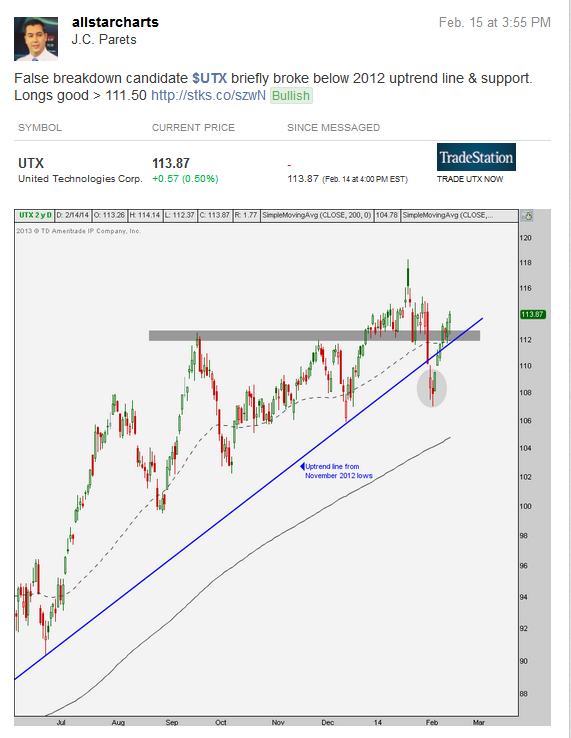 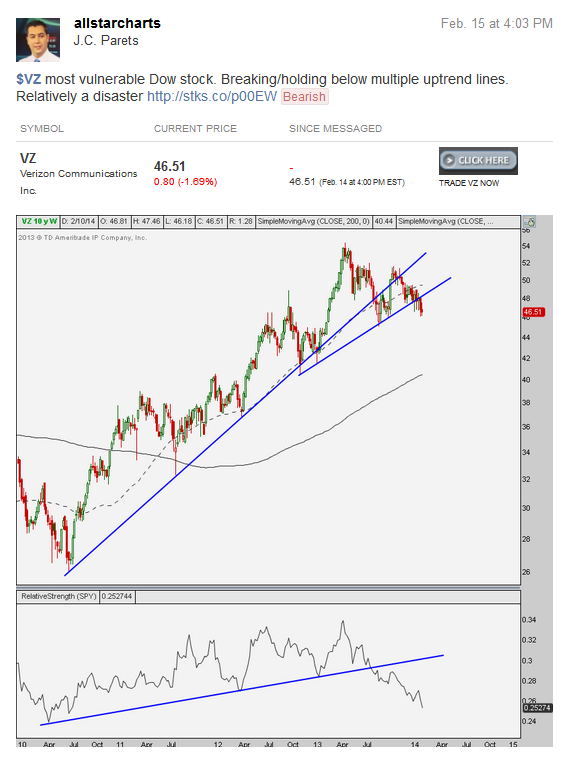 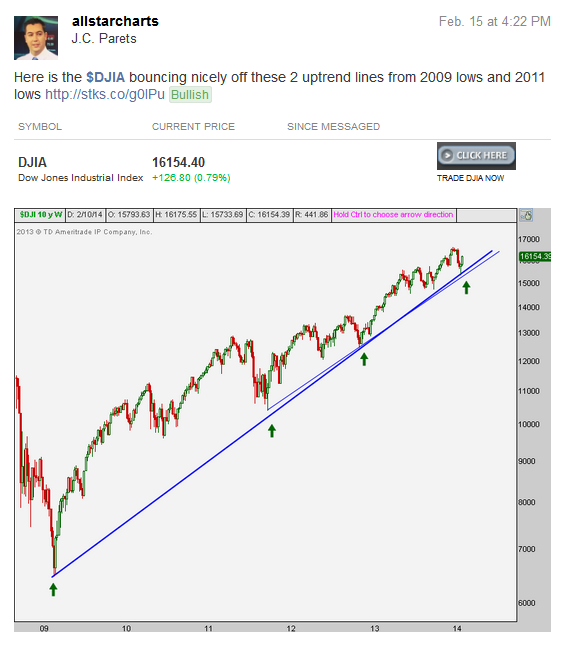 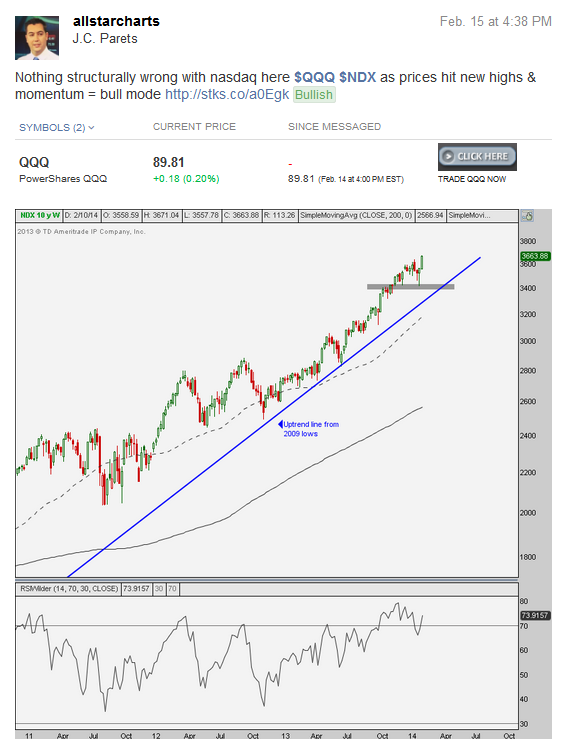 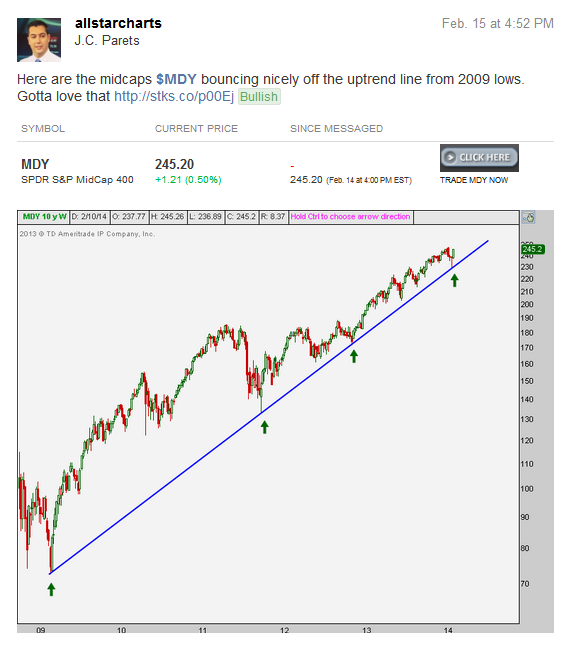 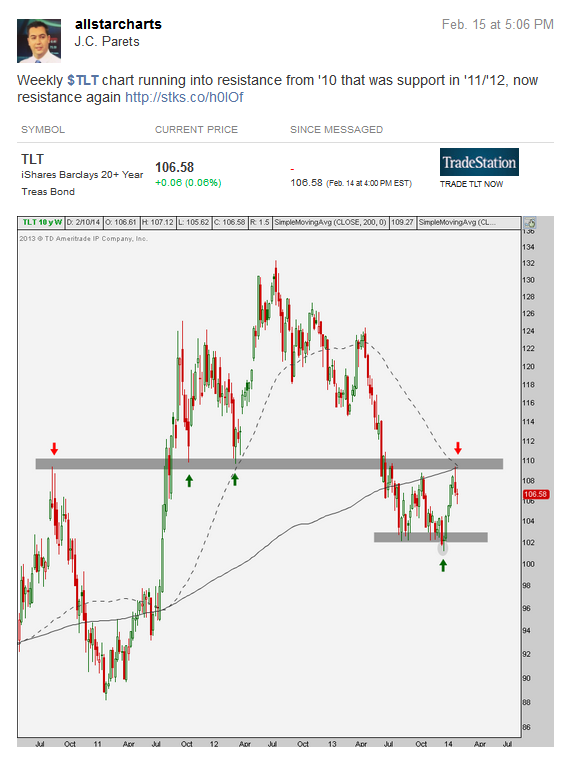 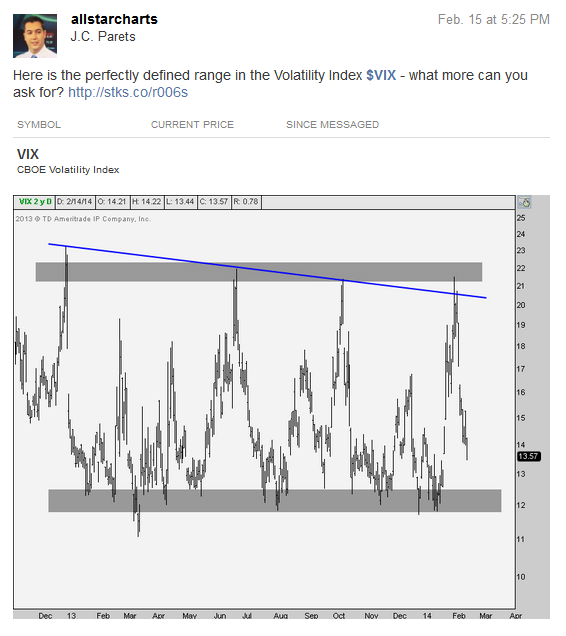 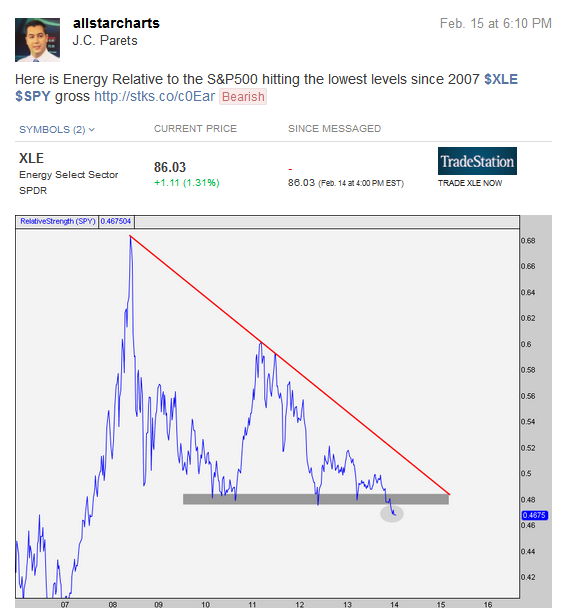 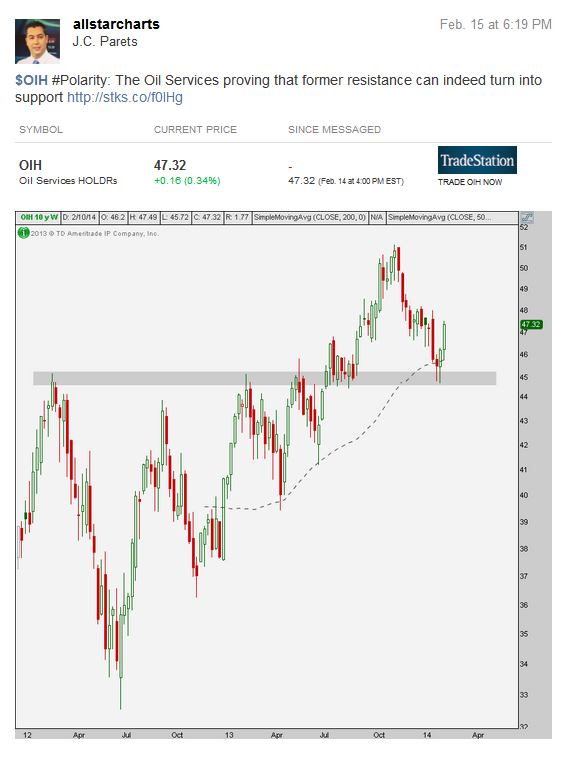 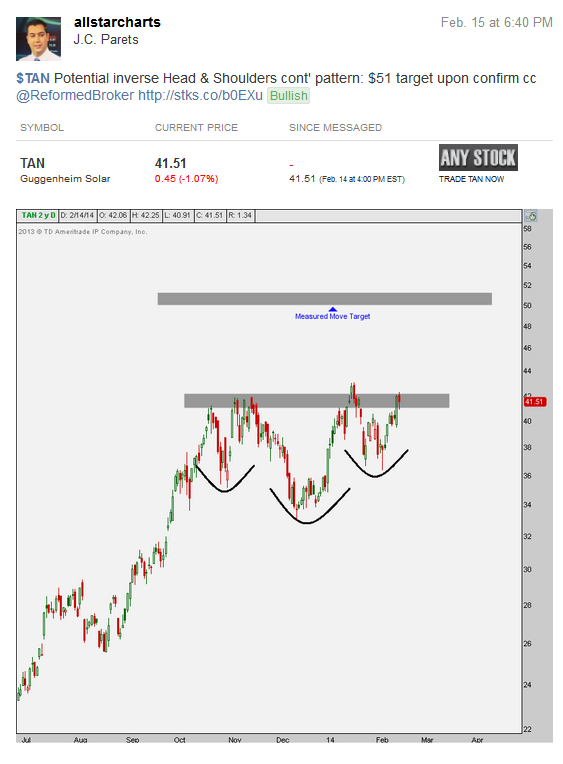 In honor of Tuesday’s earnings report, it’s probably as good a time as any to take a good look at shares of AT&T. We’ll start with the longer-term weekly chart where we can see a clearly defined uptrend line from the lows in March of 2009. One of the things I get asked a lot is how to draw uptrend lines and whether or not it is okay to have several lines to define a trend. My answer is simple: if there are multiple lines that work, draw them both. I think this is a good example of that: 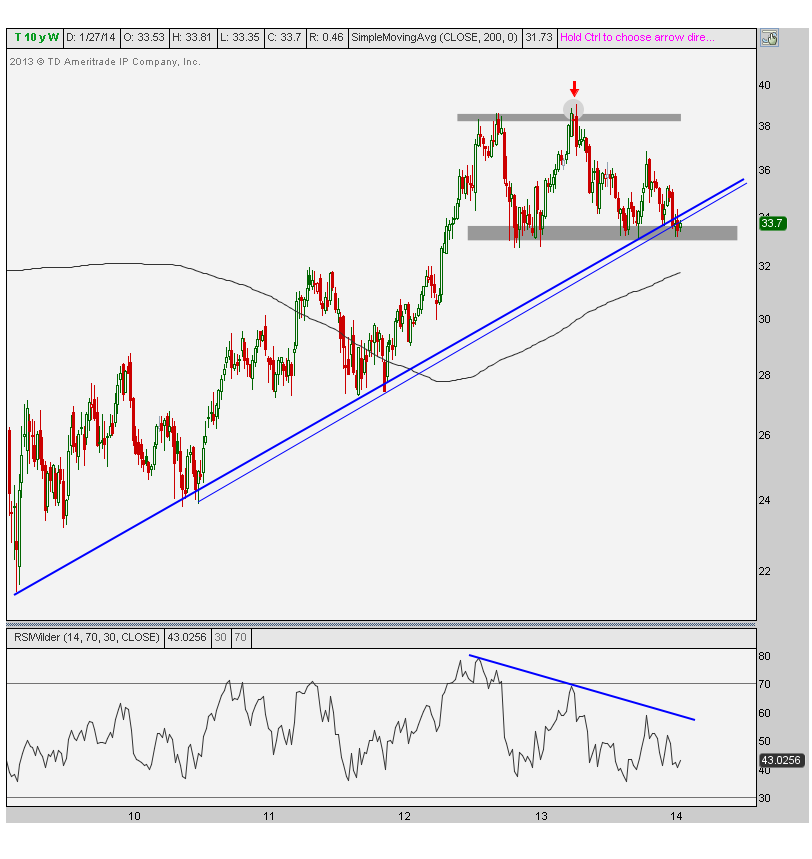 We’ve been stuck in this sideways range for a good year and a half between around 33 and 38. This isn’t very good considering what the S&P500 has done during the last 18 months. It’s not surprising that when we ran the numbers, $T has a negative 0.50 correlation with S&Ps. You can’t just assume that a Dow component will move in the same direction as the overall market.

Another bearish sign that I see is the divergence in momentum with each new high in price. Also notice that false breakout last spring (circled in gray). That was the catalyst to really stall the progress in this name. Looking at AT&T from a far, it appears as though this uptrend line since the beginning of the bull market is now in question.

Shorter term, AT&T is awfully messy. We can see these lows from 2012 just below the lows from 2013. So even a breakdown to new 52-week lows could still find support under 33. That makes it a tough short right here: 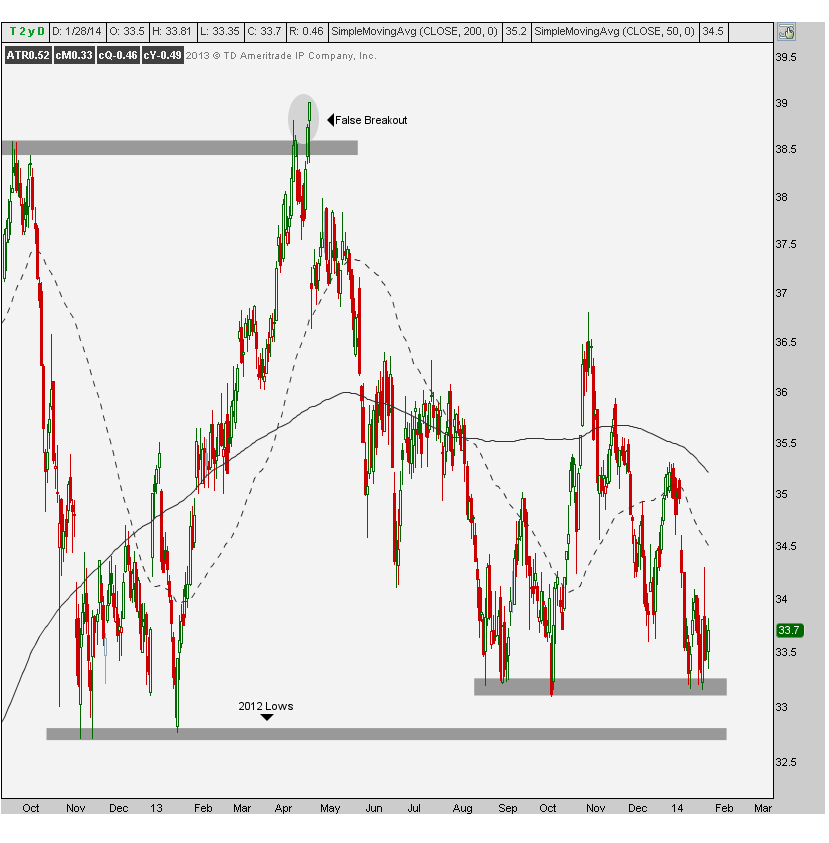 But to buy it doesn’t make much sense either: what’s the upside? I’d be an aggressive seller up near 34.50 and even more aggressive closer to 35. So to buy it here is not for me.

Now, on a relative basis it definitely looks horrible. You want to talk about a strong downtrend. Look at how this chart looks over the long-term. If you’re going to be long a US Stock, is this really the one you want to own as it makes historic lows relative to the S&P500? 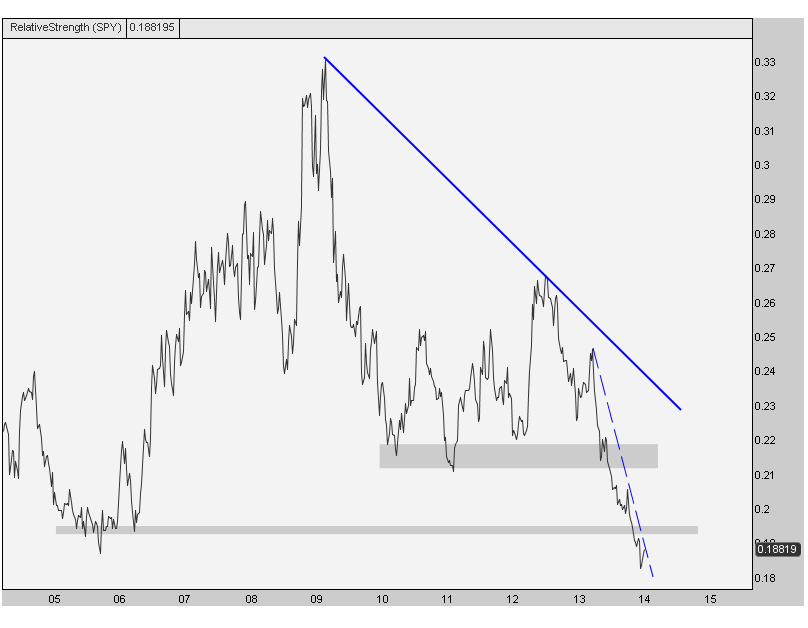 And finally here is AT&T relative to Verizon – also not a pretty picture. You don’t need to be a expert to see the series of lower highs and lower lows. Now we have a very tight range going back to last Spring. My discipline tells me that consolidations like this tend to resolve themselves in the direction of the underlying trend. So I see us probably breaking down from here. 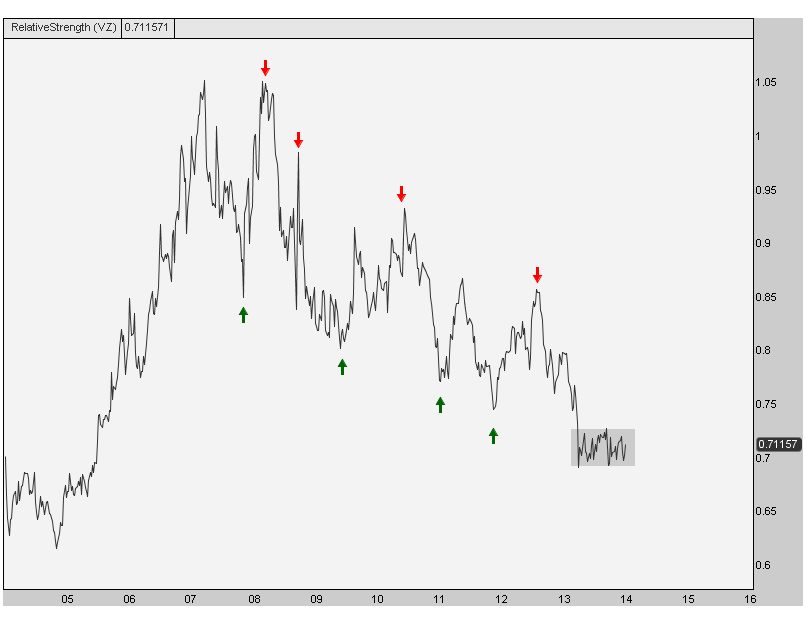 Not every single name has to be a buy or a sell. A no-touch is okay too. For right now, I don’t see a reason to be involved with this name, long or short.

Technician Carter Worth of Oppenheimer is out this week calling the S&P500 “Dead Money, at best”. I thought this was an interesting take on a large cap index comprised of 500 American companies. Remember, this is a cap-weighted index, making the largest companies more important than the others. As opposed to the Dow Jones Industrial Average that doesn’t care how big your market cap is, just the price of your stock.

‘The primary issue we have with the market is the large and growing number of ‘Bullish-to-Bearish’ Reversals found among important super cap stock composing the S&P 500,’ said Worth.

Worth reviewed the chart patterns of a dozen of marquee names and points out that all have taken on ‘rollover casts’ with their respective smoothing mechanisms flattening or already sloping down.

With regards to the S&P 500 itself, the analyst described it as ‘walking the line [and] trying to maintain its uptrend.’

‘Any weakness in the intermediate period ahead and it becomes much harder to claim that the market’s upward trajectory is intact. We ourselves are skeptical,’ concluded Worth.”

He makes some valid points. But rather than taking this as a negative, I think we should maybe feel somewhat fortunate in that this is becoming more and more of a stock pickers market with each passing day. Remember 18 months ago? Very different. Remember 3-4 years ago, the Risk-on/Risk-off hysteria? Straight silly.

So some of these humongous companies may not look so good. Big deal. Some of the others do. And some smaller ones that aren’t even in the S&P500 look great. And some of the little guys look like garbage. How much more fun is this?

Seriously who still uses a Blackberry? I don’t know anybody that owns one and is actually proud of it. Recently my mother, father, and sister all converted. They can’t stop raving about the iPhone. I witnessed my good friend Josh Brown have an Blackberry for like a month. This is the same guy who has owned $AAPL everything for as long as I’ve known him. He’s been buying the stock since 2005. He is the last person on earth that I could picture having one of these silly gadgets. The excuse when I would bust his chops was, “I’m just waiting for Verizon ($VZ) to get the iPhone”.

These days, the 2 people left with Blackberries give me the, “I’m waiting for the new iPhone to come out” excuse. It’s never, “I love blackberry”. It’s never “I don’t like the iPhone”. It’s always either one of the above excuses or, “My company pays for it and they force me to use it”. These are the same people who have iPads, and iPods, and have had MACs for years. $AAPL recently came out with a commercial that brilliantly ends with:

Clearly, I’ve had one since the beginning and can never use anything else. I’m sorry for getting all fundamental and Mother Goose on you guys, but it’s just how I feel. Here’s the chart. ‘Nuff said: 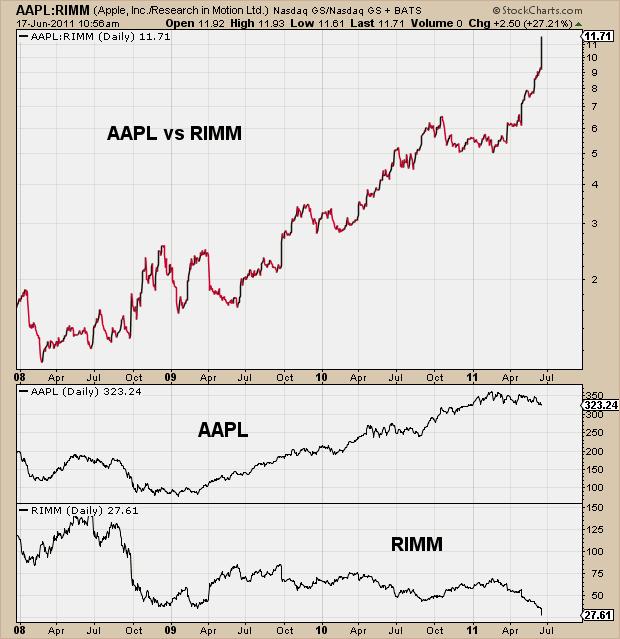