If you want to talk about a serial underperformer, look no further than the Energy space. Since peaking in the summer of 2008, we’ve seen a consistent trend of lower highs and lower lows in Energy relative to the S&P500. But based on the action we’ve seen throughout 2014, I think there’s a good chance that the lows are in.

Here is a weekly line chart of the SPDR Energy ETF $XLE vs the S&P500 ETF $SPY. What catches my attention here is the potentially false breakdown below multi-year lows that quickly reversed to get back above support. This is how some of the most beautiful uptrends are born: 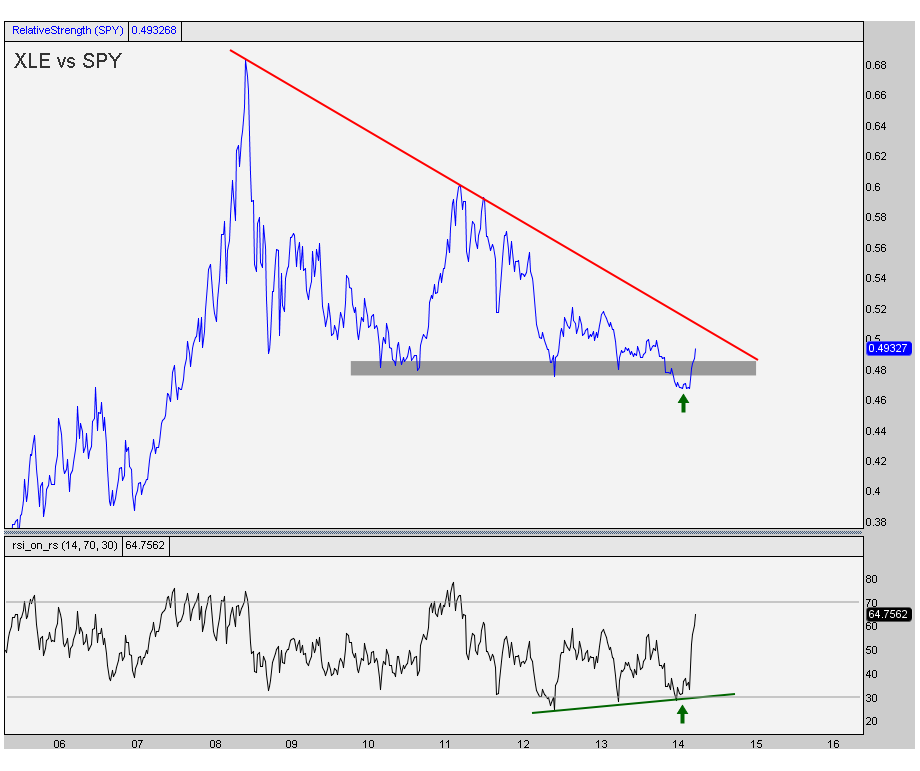 Take a look at the momentum readings down below. We’re looking at a 14-week Relative Strength Index on the spread (XLE/SPY). With new lows in price to start the year, momentum was already putting in higher lows. This bullish divergence on the false breakdown makes this even more intriguing.

We want to see a breakout above 50 or so to confirm a breakout above this 6 year downtrend. Based on the false breakdown and bullish momentum divergence, I think this can happen very soon. This would give us an initial target of around 60, which represents the highs from the Spring of 2011. This 60 level is also the 61.8% Fibonacci Retracement from the entire 2008-2014 decline. So I’d say it is significant and can offer us a solid initial target. But let’s not dismiss the possibility of this spread reaching the 2008 highs, which gives us a target almost 40% higher than current levels.

There are two things we can do with this data. The first one is obvious. If we like it we can just buy XLE and short an equivalent nominal amount of SPY. But if pairs aren’t your game, and that’s okay, we can use this relative chart as information. As it turns out, Energy is a late cycle sector. This is one of the areas that tend to outperform towards the end of a bull market. 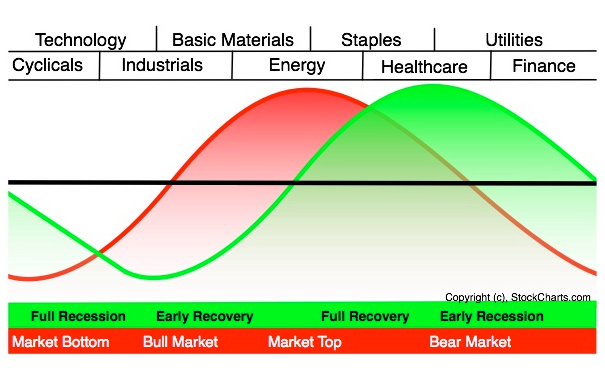 Think back to 2008. Notice how Energy kept rallying on a relative basis into the summer of 2008, well after most of the market had already peaked. Meanwhile the ever so important Financial sector peaked towards the end of 2006. This is an early cycle sector that tends to lead at the beginning. Don’t look now, but Financials peaked on a relative basis last July and have been putting in lower lows and lower highs ever since.

What does this tell us about the current market environment?

REGISTER HERE for more information on how to get weekly updates on all of the US Stock Market Sectors and Sub-sectors.