END_OF_DOCUMENT_TOKEN_TO_BE_REPLACED

It’s been a big August for US Stocks and other risk assets. So not really a coincidence that it’s also been an extremely productive month for semiconductors. You see, we look to semi’s as a leading indicator for tech as well as an overall gauge for risk appetite. Back in early July we mentioned that Semi’s were dancing around these declining trendlines, but that since momentum had just turned positive, a breakout was imminent. Sure enough, the 390 level in the Philadelphia Semiconductor Index ($SOX) was taken out at the beginning of August and the stock market was off to the races.

Today we want to take a look at the Semiconductor ETF because there has been some serious polarity for all of 2012. In fact, these support/resistance levels can be seen all the way back to last June, but let’s stick with just this year for now. The key levels are around 32.50-33, but it’s really an even tighter range than that. Let’s remember Polarity = Former Support turns into Resistance, and former Resistance turns into Support. This is what they teach us in Technical Analysis Kindergarten.

And here it is in action: 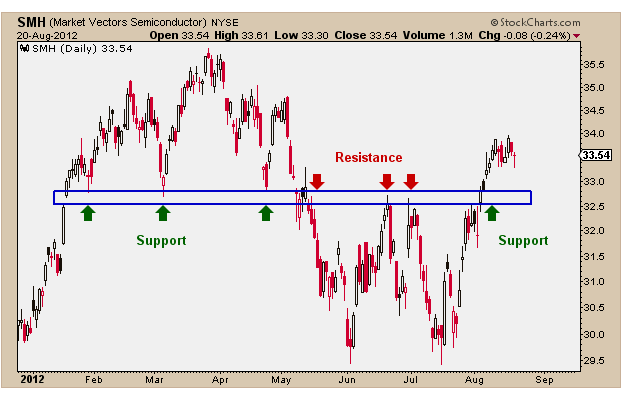 As we can see in the chart, $SMH is now back above this important polarity zone. Any tests of this support (formerly resistance) should meet buyers accumulating shares. More importantly, the measured move that we achieve after the breakout takes us to around $35.50 (32.50-29.50 = 3 + 32.50). This level also represents the highs for the year where we should expect to find some supply.

This move of just a few bucks may not seem like a big deal at first glance. But the impact that a 6%+ move in semi’s from here would have on US Stocks and other risk assets is no joke. Higher beta individual names would do much better, but this also signals that the Nasdaq, even at 52-week highs, could have further room to run.

Not shown in the chart (but mentioned here), momentum in the Relative Strength Index turned positive in early June. This is what gave us a heads up that a breakout was probable. Price then confirmed it three weeks ago. Also, we have upward-sloping 50 and 200 day simple moving averages (not shown). This also tells us that we should continue to give the bulls the benefit of the doubt here.

The point of the post was to show how important this polarity has been, not just for Semiconductor stocks but also the impact that it has on everything else. If we include the positive momentum, rising smoothing mechanisms, and higher measured move targets, we should expect to see higher prices for semi’s in the near future.

One of our more reliable leading indicators right now is Semiconductor Index. You’re going to need chips in order to build anything tech related. And demand for chips and chip stocks is evidence to us of future demand for technology. So with the tech-heavy Nasdaq leading the S&P500 & Dow Industrials over the past decade, I think it’s probably a good idea to keep a close eye on this space.

We can see in the chart below that last month the Philadelphia Semiconductor Index broke its downtrend from the March highs. After some backing and filling, we now have a fixed level of resistance that we can focus on. I’m talking about the 390 level where the $SOX peaked on June 20th and July 5th. This price is also where we find the 200-day moving average as well as resistance from a secondary trendline off the April highs: 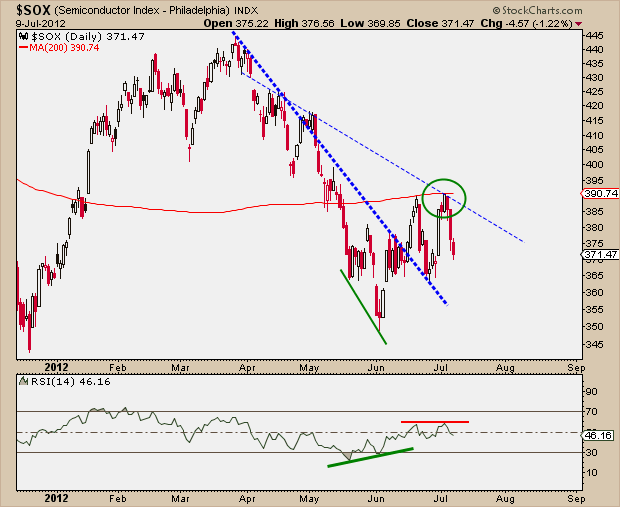 From a momentum point of view, the road ahead is pretty clear. We begin with a bullish divergence in the Relative Strength Index as the price of the Semiconductor Index made lower lows going into June, while momentum had already turned higher putting in a higher low. Now we find ourselves at the important resistance level of 60 for RSI. Typically, we find that when markets are in a ‘bearish mode’ momentum tends to reach oversold conditions (as it did here) but struggles to get above the low 60s (as it has here so far). When this momentum oscillator powers into overbought conditions, we have evidence of buyers (not yet in this case).

So going forward, we know what to look for. The downtrend in the price of Semi’s has been broken, but hasn’t necessarily reversed. A Bullish Divergence in RSI tells us that a reversal could be imminent. And for confirmation of a new uptrend in the $SOX we want to see price break through that ever-so-important 390 level. Simultaneously, this should take RSI above those June/July peaks and into overbought territory, confirming a new bullish mode.

This series of higher highs and higher lows in price combined with bullish momentum readings is our best definition of an uptrend. And an uptrend in the Semiconductor Index means an uptrend in the Nasdaq, which tells us that stocks overall and risk-assets in general are probably going to do well.

Guys, I think the force is strong with this one.

The semiconductors are rocking and rolling.

They remind me a lot of a Devin Hester Kickoff Return. It all looks bleak and you don’t want him to return it because he’s 8 yards deep in his own end-zone. But he does it anyway. Then you have 10 angry guys trying to knock him down (and a kicker with no hope). Hester takes it out – he jukes left, spins right, breaks a couple of tackles and eventually gets past every defender. As he crosses mid-field there’s no one left in front of him – just a bunch of opposing players in defeat trying to catch up.

Well same thing with the Semi’s. In early October the Philadelphia Semiconductor Index was still making new lows. Meanwhile, the Relative Strength Index (RSI) was putting in a bullish divergence. This slingshot type action was the first thrust out of the end-zone. Then came that downtrend line (in green), or the first defenders. Once the $SOX got through that level it was all green until the 61.8% Fibonacci retracement from the February highs down to the October lows. A few weeks of consolidation here and the Semi’s got through. As you can see in the chart below, $SOX made new highs last week and are looking forward to those February highs from a year ago. 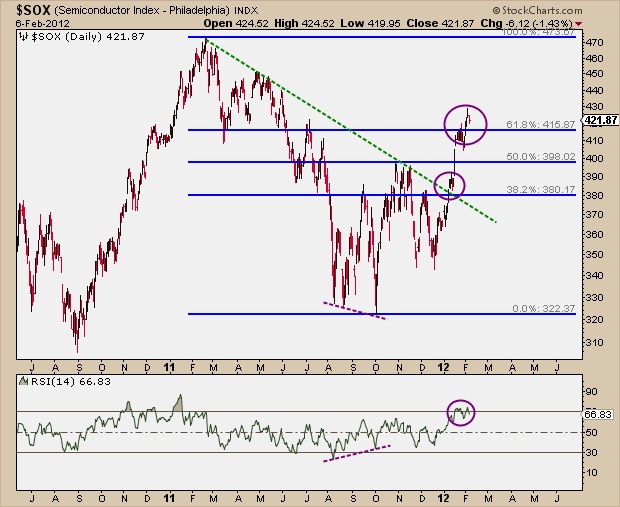 Today, Semi’s feel the same way Hester does when he breaks the kicker’s ankles around mid-field and there’s no one left between him and the end-zone. Can someone technically come from behind and catch him? Sure. Can semi’s roll over here and get back below that 61.8% fib retracement? Sure, anything is possible. But would I bet on either one of those to happen? Not really.

We look at Semi’s as a leading indicator. If there is demand for anything electronic, you’re going to need chips. That’s the bottom line. So if you see demand in chips (making new highs, breaking resistance), then we presume there is demand for electronics. This is a positive for equities as a whole. This is a bullish $SOX chart and it looks to me like it’s going much higher. To be safe, we want to see the $SOX stay above that 61.8% fib level around 415. When you think about it, we’re not at a bad risk/reward point here at 422 or so. As long as we remain above there, just picture Devin Hester doing the “Deion Sanders” down the sideline.

A lot of you football fans enjoy watching Hester do his thing in the NFL. But as a die-hard Miami Hurricanes fan, he’s been impressing me since he was just a pup putting on a show in the Orange Bowl. Here are a few highlights of him in Miami so you know what I mean. Seriously, make sure you watch this video. Incredible stuff.