END_OF_DOCUMENT_TOKEN_TO_BE_REPLACED

When you talk about terrible commodities, the popular train wrecks that come to mind these days are in energy and precious metals. The gold crash is obviously hilarious, Crude Oil rolling over again after a brief mean reversion early in the second quarter is getting a lot of attention, but there are other markets out there that I think can present some good opportunities. Remember we’re not here to make headlines and sell commercials, we’re here to make money. It might not be sexy, but I think Coffee has the best chance for a mean reversion between all of these disasters mentioned above.

First, let’s go back a few years and put things in perspective. This is a weekly chart showing the crash in Coffee from its peak in May of 2011. Coffee prices went from over 300 down to 100 in a little bit over 2 years. In early 2014 Coffee was able to hold above all of the downtrend lines defining the crash over the previous couple of years. We’ll call this level 120: 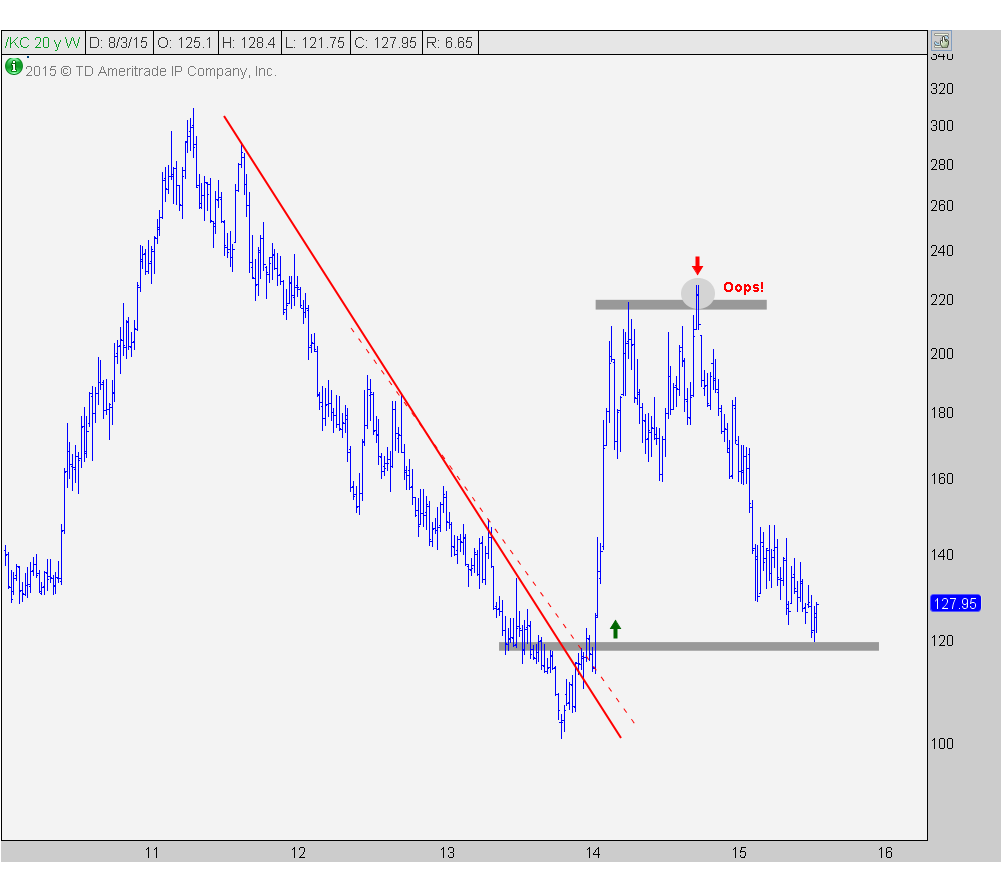 Notice how once it exceeded these levels, Coffee prices exploded to the upside. Although not relevant to this conversation, I would be remiss if I didn’t mention that beautiful failed breakout last October that sparked a 100 point sell-off. You gotta love that…..

Anyway, prices now got back down to that 120 level where the original rally last year got started. From a sentiment perspective, our data suggests that Coffee is currently the most hated that it’s been since November of 2013, exactly where Coffee bottomed out. Meanwhile, the latest C.O.T. report shows the Commercial Hedgers (or the “Smart Money”) buying Coffee the most aggressively since……yup you guessed it: November of 2013.

So what do we know for sure? Coffee prices are down to the original breakout level last year, there are the most bears since it bottomed in the Fall of 2013 and the Smart Money is buying as aggressively as possible, the most since it originally bottomed out. The weight-of-the-evidence tells me that we should probably pay attention here.

From an execution standpoint, we now want to look at this on a daily timeframe and see if this presents a good risk vs reward opportunity. Here is a daily candlestick chart with a 14-day relative strength index to represent momentum. The first thing that stands out is the lower lows in price last month down to that key 120 level mentioned above, but simultaneously momentum put in a higher lows. This is what we call a bullish divergence: 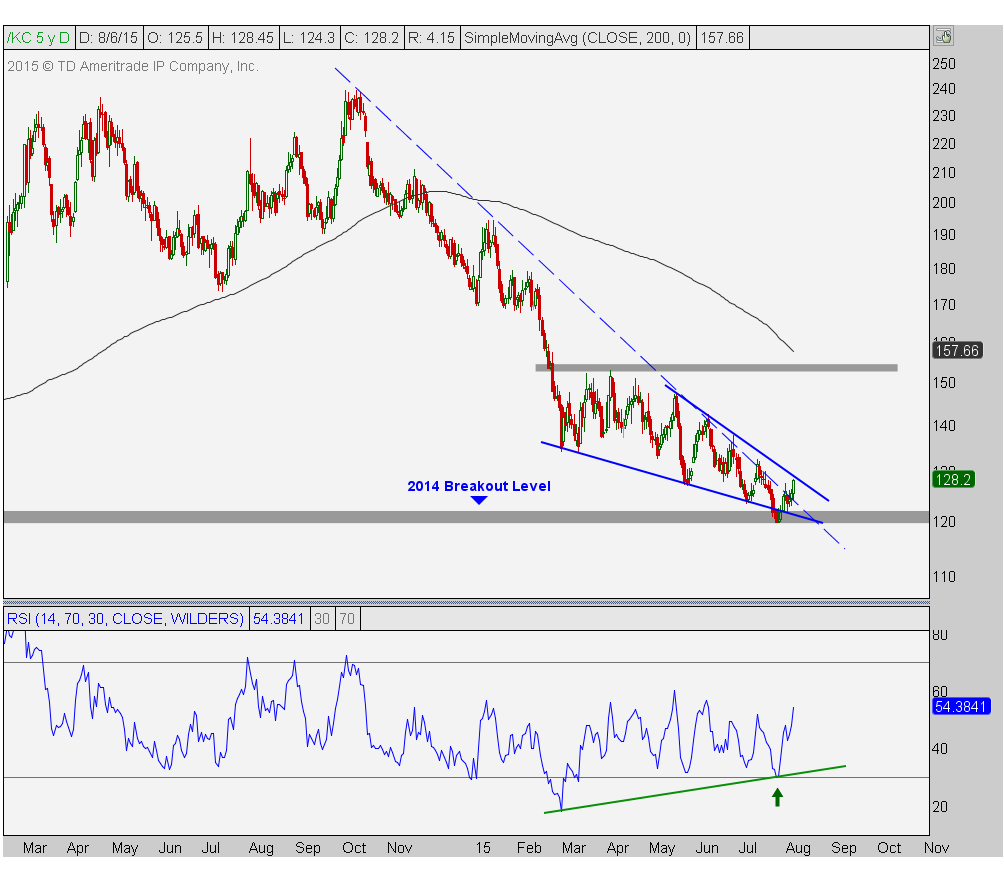 While all of this extreme sentiment and bullish momentum divergence is taking place, prices have ironed out what looks to me like a bullish falling wedge. This wedge is well defined by these two converging trendlines since the first quarter. The brief failed breakdown last month below the lower of the two trendlines I believe can be the catalyst to get this going to the upside. Prices have already taken out the downtrend line from the highs last fall (dashed line), so I would be all over this if Coffee can exceed the upper of the two converging trendlines.

Aggressive buyers can be long only above the lows from last month. For more patient market participants, we can wait for a breakout above the downtrend line from the May highs and only be long above that level. The execution here really depends on your time horizon, your risk tolerance and overall goals as a market participant. We’re all different and this needs to be defined before entering any new position, not just Coffee.

Either way, I think there is enough going on here that we should pay attention. Price target-wise, this is nothing more than a mean reversion idea. I would be a seller into 155 where we find resistance from April. To me, the risk/reward down here favors the bulls.

Click Here to receive updates on these charts on a weekly basis along with 16 other commodity futures contracts including Crude Oil, Gold, Silver and Corn on multiple timeframes.