Today I wanted to share some of my conclusions after running through all of the Dow Components and S&P Sectors on both weekly and daily timeframes. This analysis consists of over 120 charts and all of them have been updated today in the Chartbook. END_OF_DOCUMENT_TOKEN_TO_BE_REPLACED

END_OF_DOCUMENT_TOKEN_TO_BE_REPLACED

Here is the video in full (audio begins immediately, video gets going after 30 seconds)…..Enjoy! END_OF_DOCUMENT_TOKEN_TO_BE_REPLACED

All of the 30 Dow Components have just been updated in the Chartbook, and here are my notes on the results: END_OF_DOCUMENT_TOKEN_TO_BE_REPLACED

Momentum is a word that gets thrown around a lot. I personally like to measure momentum using a 14-period relative strength index (see here), but different people have different definitions. Fine. For today, we’ll argue that “momentum” stocks are those listed in the MSCI USA Momentum Index. Looking at these stocks as a group, I think they are going to continue to get destroyed going forward, particularly relative to the rest of the market.

First of all, forget this whole FANG thing. I don’t know who made that up or why people like to limit it to just 4 stocks. I think it’s stupid. They have nothing to do with one another and there should be others included in the list. In fact, in November I wrote a piece about how FANG stocks are this cycles Four Horseman (See here) and was further evidence at the time that made us very bearish U.S. Stocks heading into December and January. That obviously worked out very well. END_OF_DOCUMENT_TOKEN_TO_BE_REPLACED

I think at this point I’ve exhausted my thesis about there being too much overhead supply across the stock market. But yesterday I was doing my weekly Dow 30 review, and I couldn’t help but notice how many examples I found where prices were now holding below a ton of former support, which of course, turns into overhead supply. The old saying is, “Don’t fight Papa Dow”, meaning that if you can take the weight-of-the-evidence you’re seeing from the Dow 30 stocks, you’re going to get a very good idea of which direction the major averages are headed. Say what you want about price-weighted indexes, but the correlations the Dow has with the other large-cap averages is through the roof. Whether you agree with how a price-weighted index is constructed or not, the Dow moves with the S&P500 and your other favorite cap-weighted indexes. So we like to track it because the fact that there are only 30 stocks in it makes it simple for us to do.

Here are a few examples of overhead supply throughout the Dow 30. All of these broken support levels become resistance on any rebounds. We’re talking about either the bag holders that didn’t sell when they had the opportunity or the ones who bought too late. The overhead supply consists of the excessively large, “just please get me back to break even” crowd that is sitting there hoping for a bounce back in order to sell it to you. 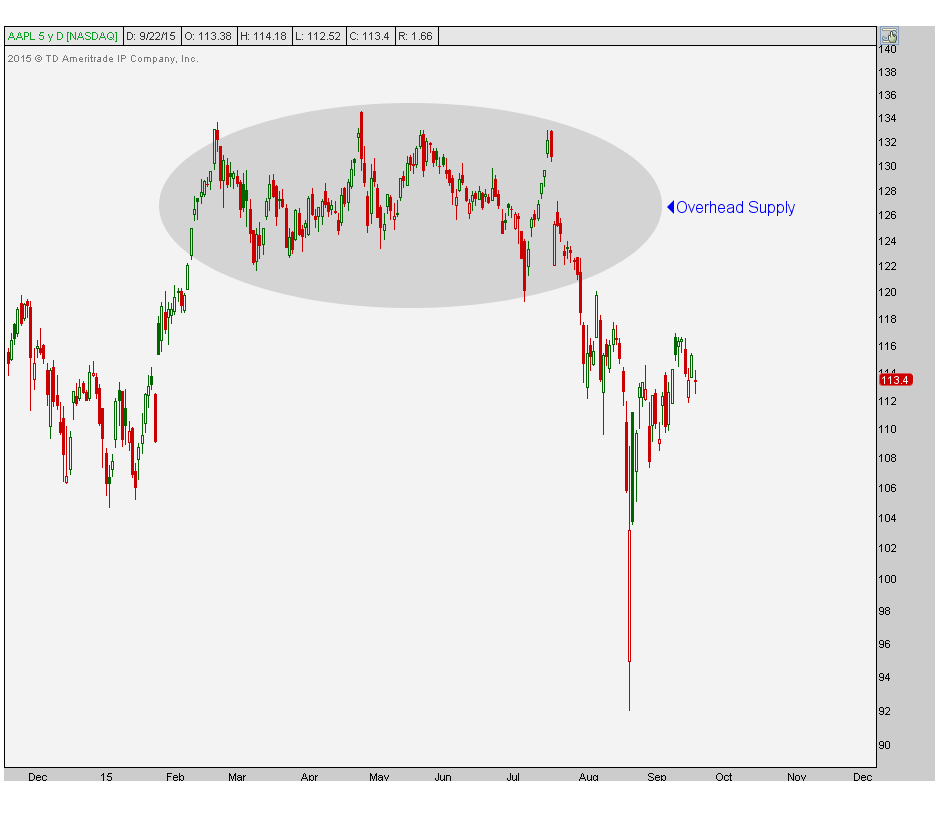 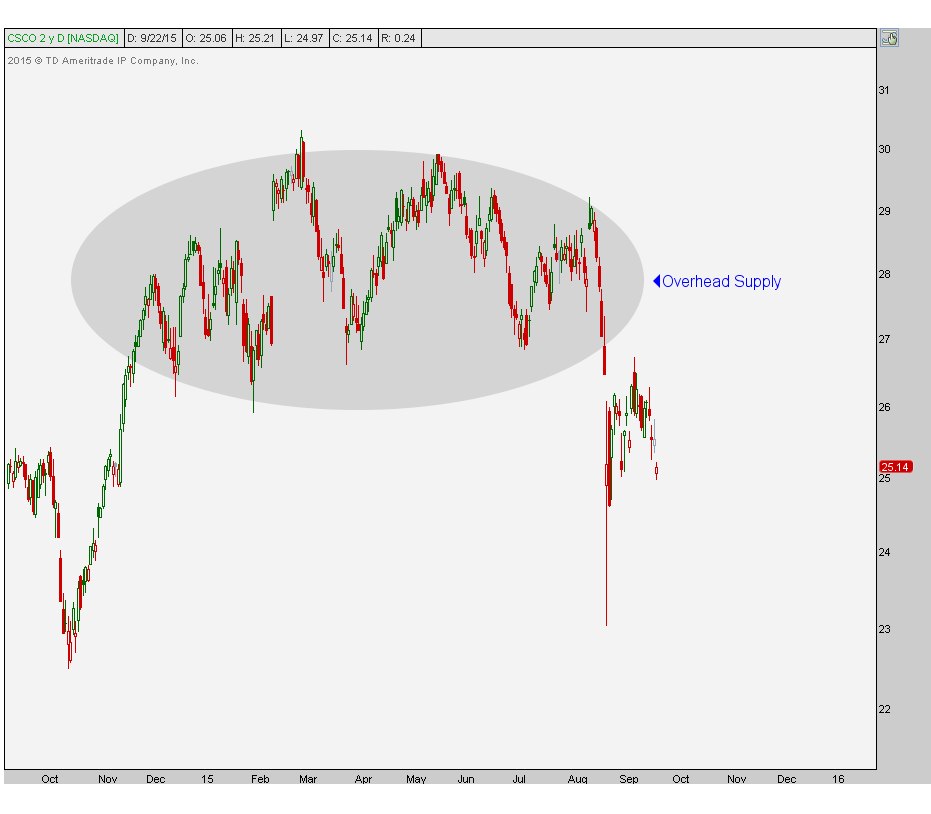 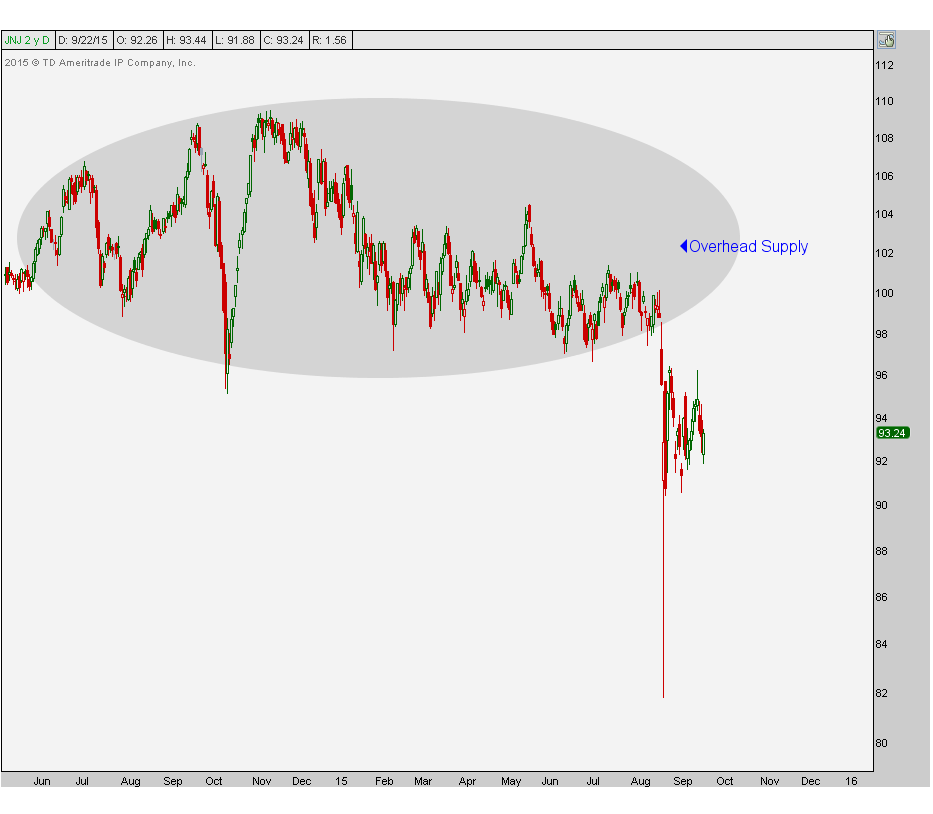 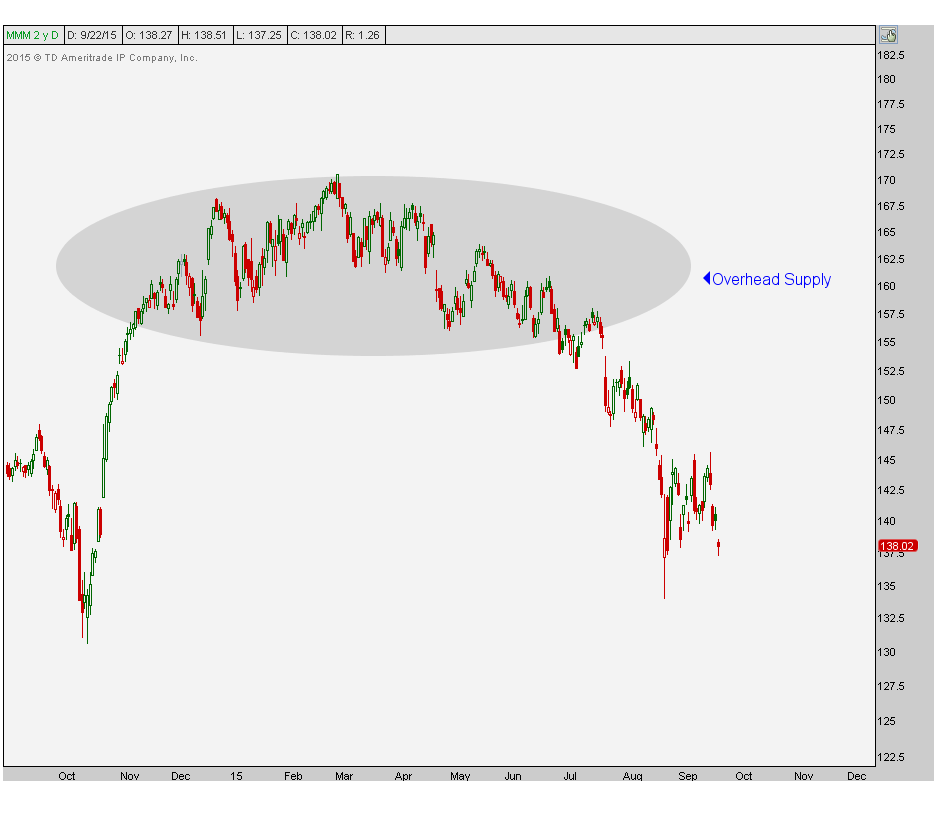 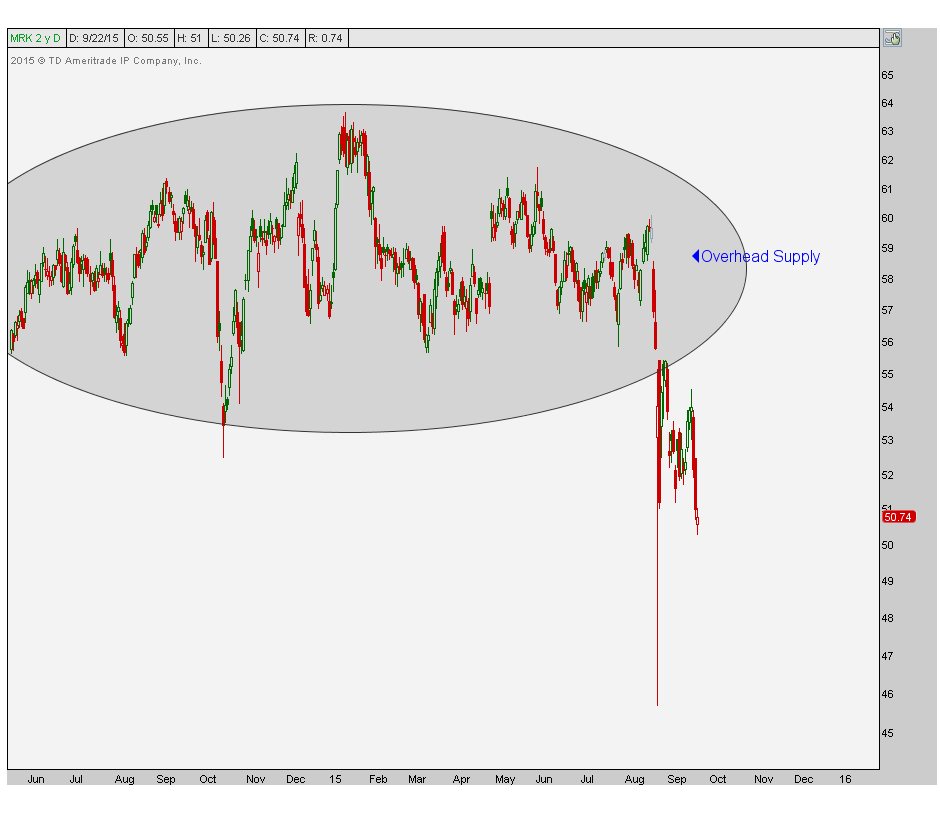 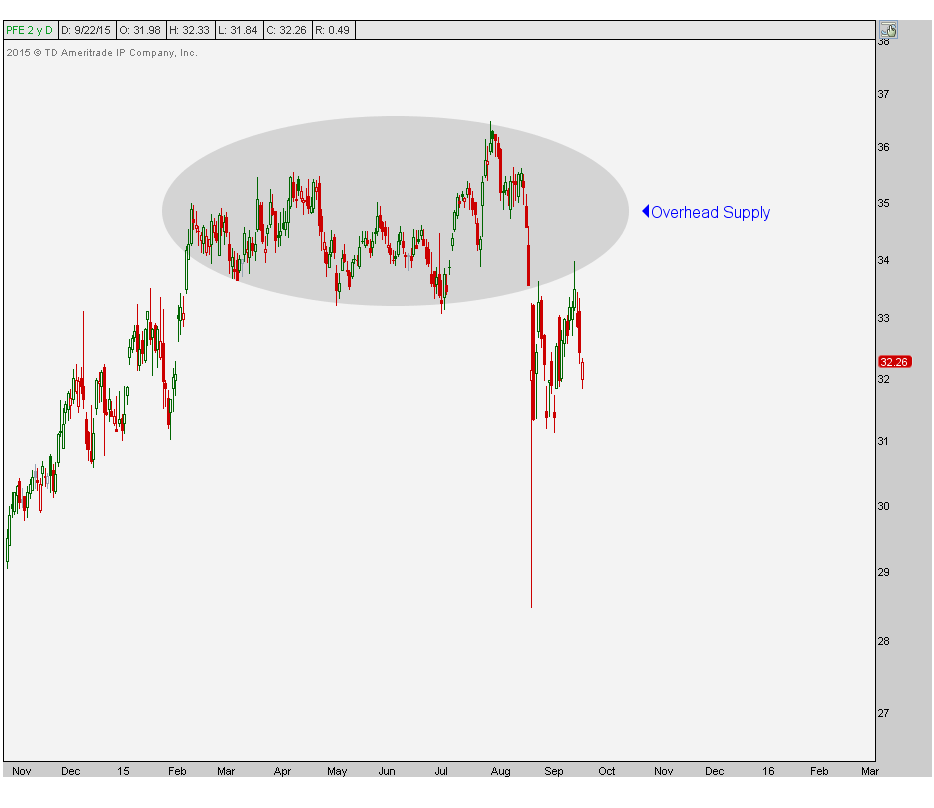 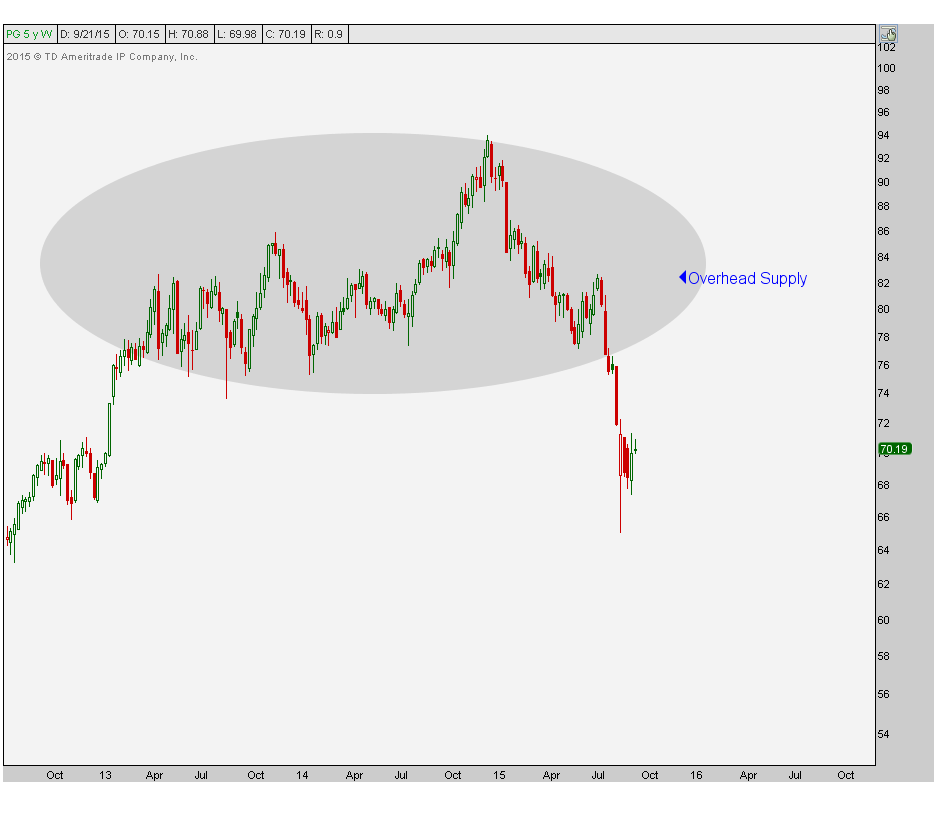 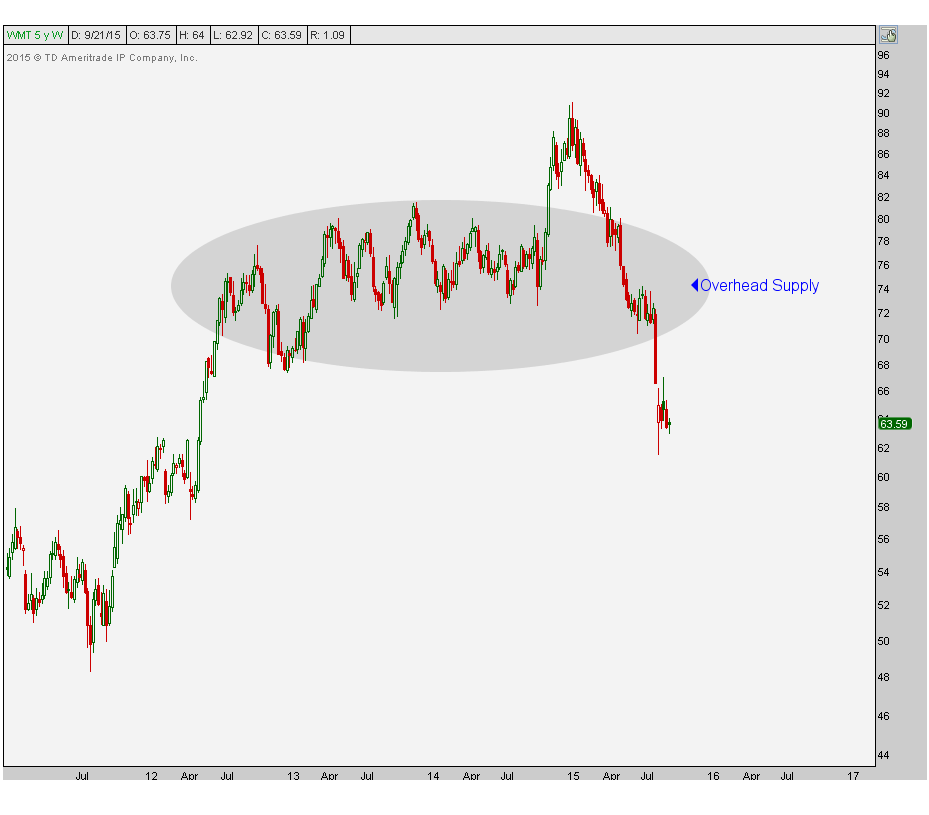 There are more examples but I think you get the point. A lot of these stocks are stuck below a ton of overhead supply. It is very difficult for prices to just rip right through that without first absorbing all of that supply. At the very best it’s going to take some time. At the very worst, things will get uglier before they get better. Either way, it is more of a sell strength environment than a buy weakness. That’s how I see it.

Sure, there are exceptions to this overhead supply phenomenon like Nike, United Health and Home Depot that are sitting right near their all time highs and not below overhead supply like so many others. But these are the few exceptions, not the majority. It’s no wonder the Dow Jones Industrial Average itself is stuck below so much overhead supply: 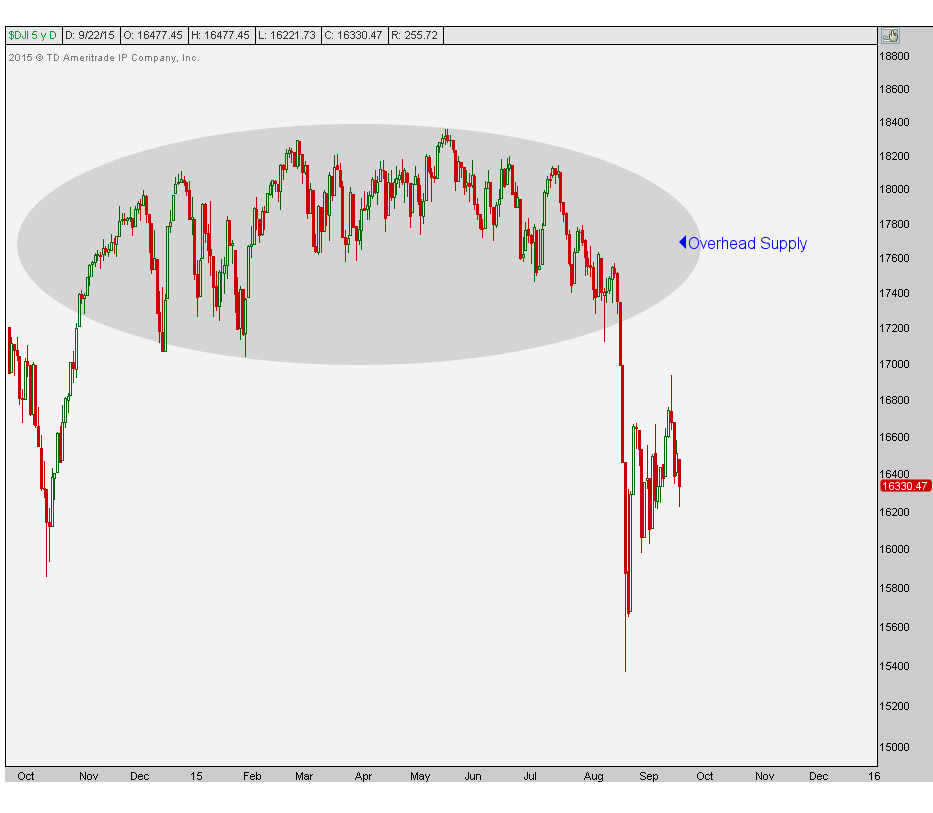 This is a big theme right now and an ongoing problem. I don’t care about China or interest rates or whatever the “problem” du jeur is being advertised by the media. I’m worried about the overhead supply. If there are more sellers than buyers, it’s hard for prices to rise. That’s just supply and demand 101. We will keep reevaluating, but I don’t see this problem going away any time soon.

Click Here to receive weekly updates on each of these charts looking at both daily and weekly timeframes. These reports also include the rest of the Dow 30 components. 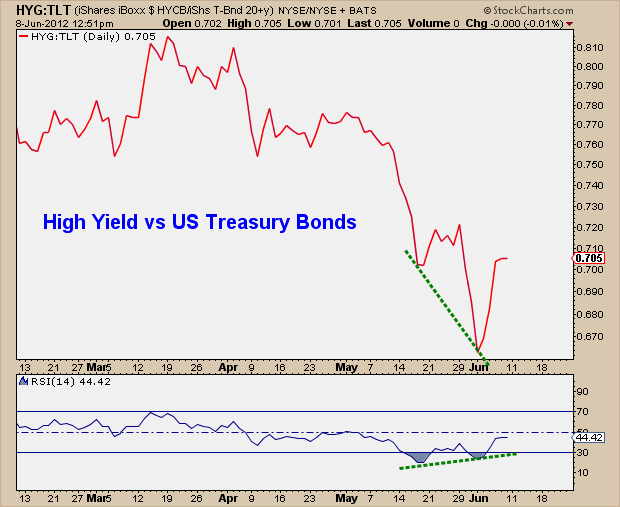 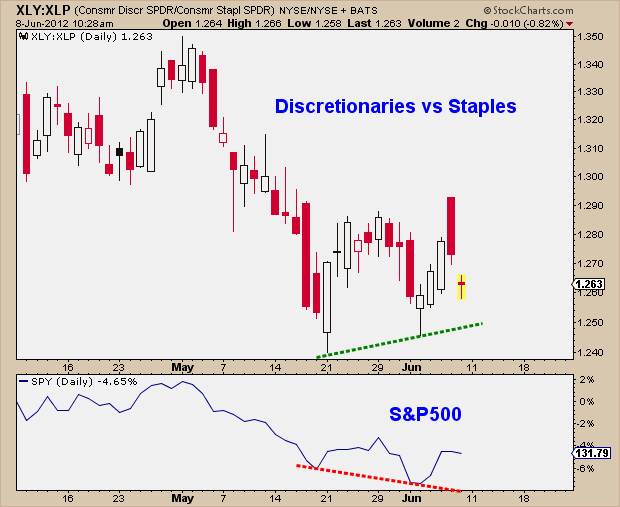