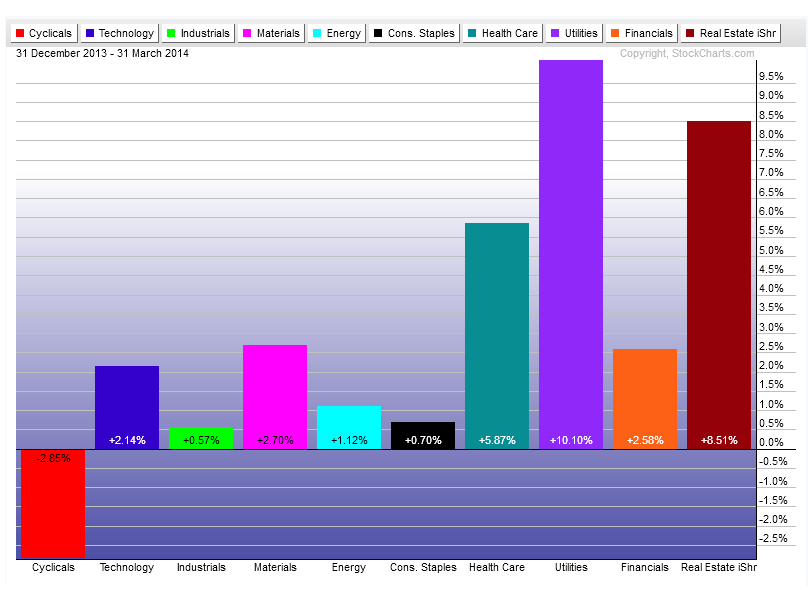 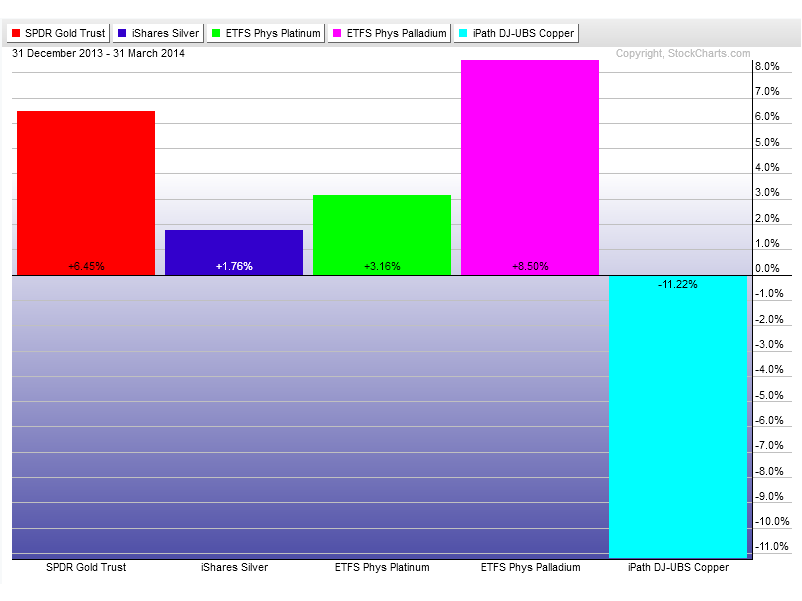 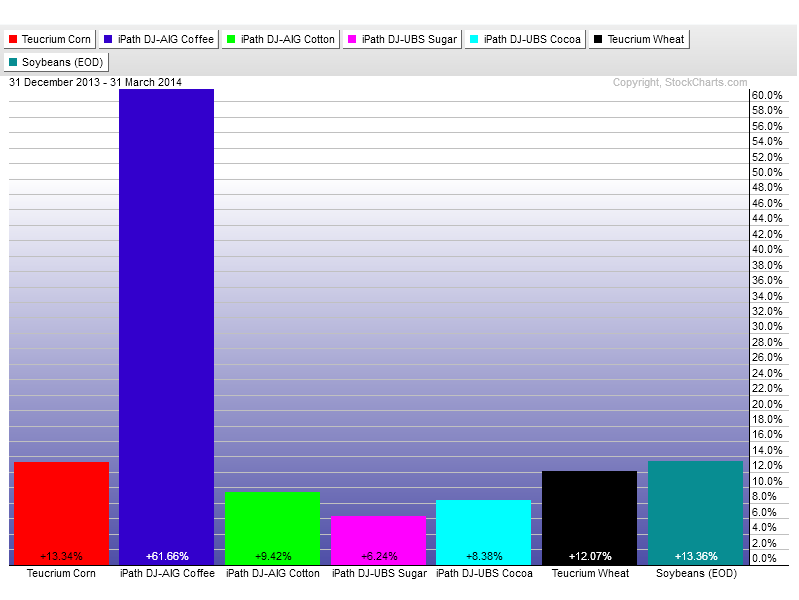 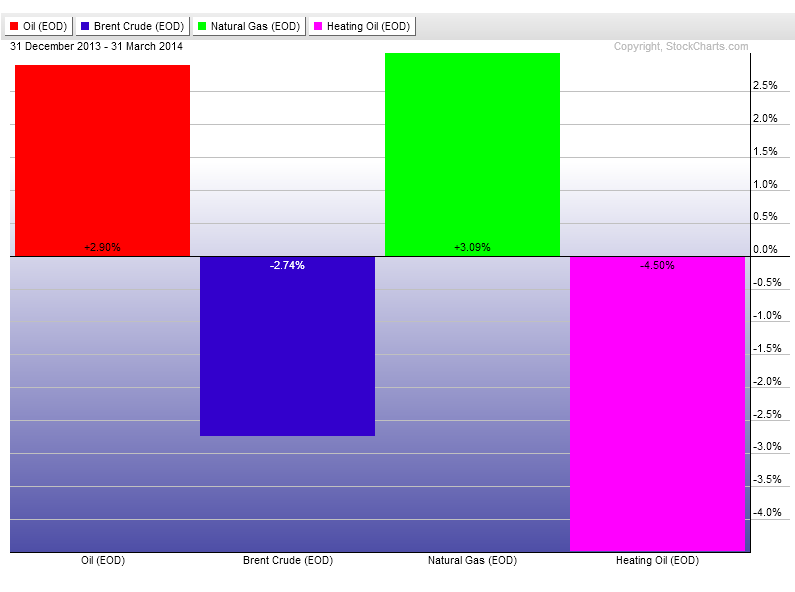 For several years now, the price of Brent Crude Oil has been nicely outperforming prices of the West Texas Intermediate light sweet crude oil. But I think we’re finally starting to see that shift in momentum back towards WTI.

Here is a chart of $USO vs $BNO, the two ETFs that represent WTI and Brent crude oil. You’ll notice the brief new low in November that quickly came back and sparked this recent rally in the spread: 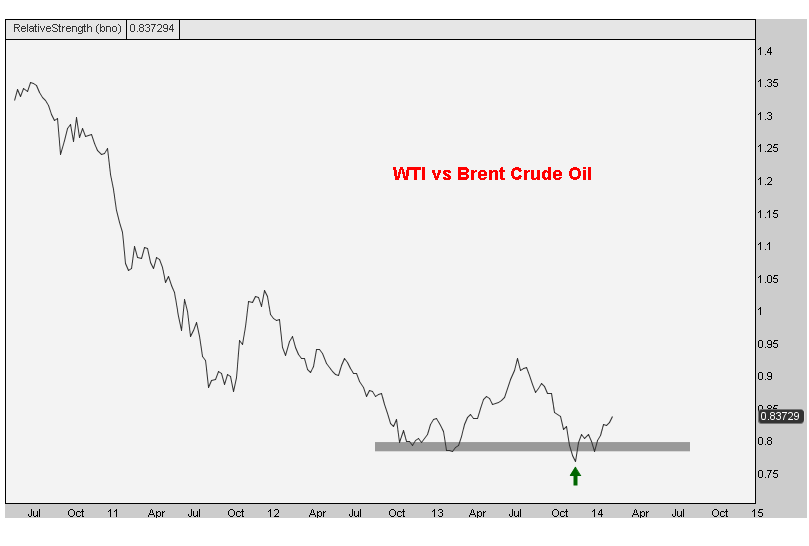 This next chart takes a closer look at that whipsaw in the USO/BNO spread. Not only do you have an island reversal of sorts down there, but also a nice bullish divergence in momentum: 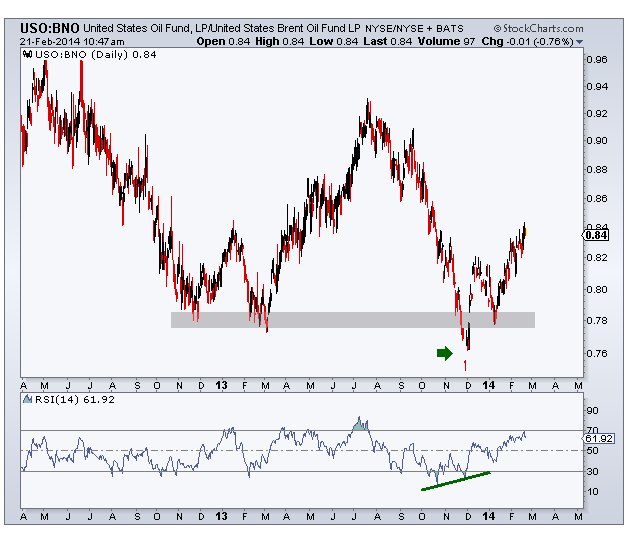 I think this spread can easily get back to 93, but this false breakdown can absolutely be the catalyst to take this spread substantially higher and well above parity.

From a risk management standpoint, more tactical participants want to see this spread hold above 82. A breakdown below that would signal to me that more consolidation may be necessary. Under those circumstances, this chart becomes messier. We definitely want to see those levels hold.

REGISTER HERE for more information on how to get on our commodities distribution list.

The folks at CitiFX are out with their annual 12 charts of Christmas. In their view, the intention of these charts is to establish a ‘starting point’ for views as we head into 2013. There’s a lot of juice in this presentation. Here are a few of the bullet points via zerohedge:

A couple of the charts that I found interesting (click to embiggen): 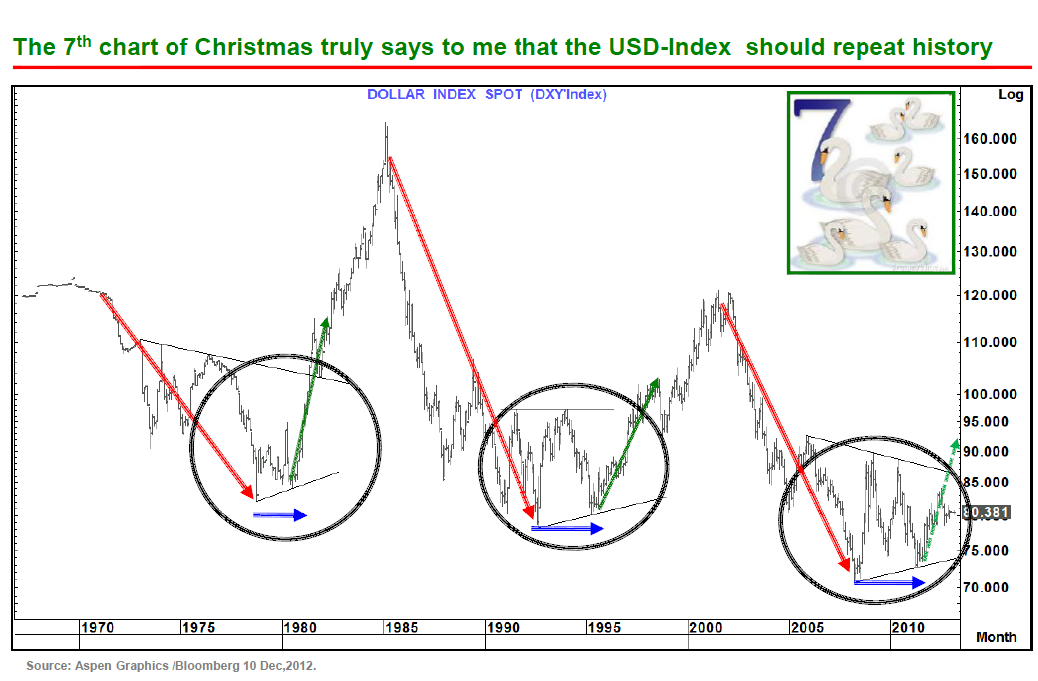 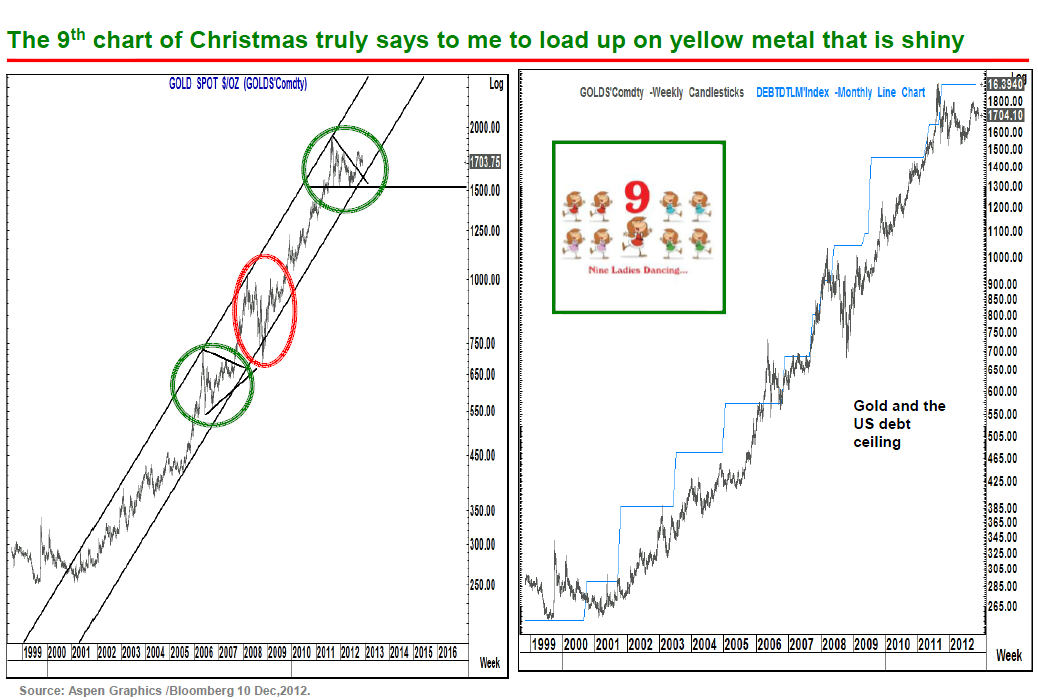 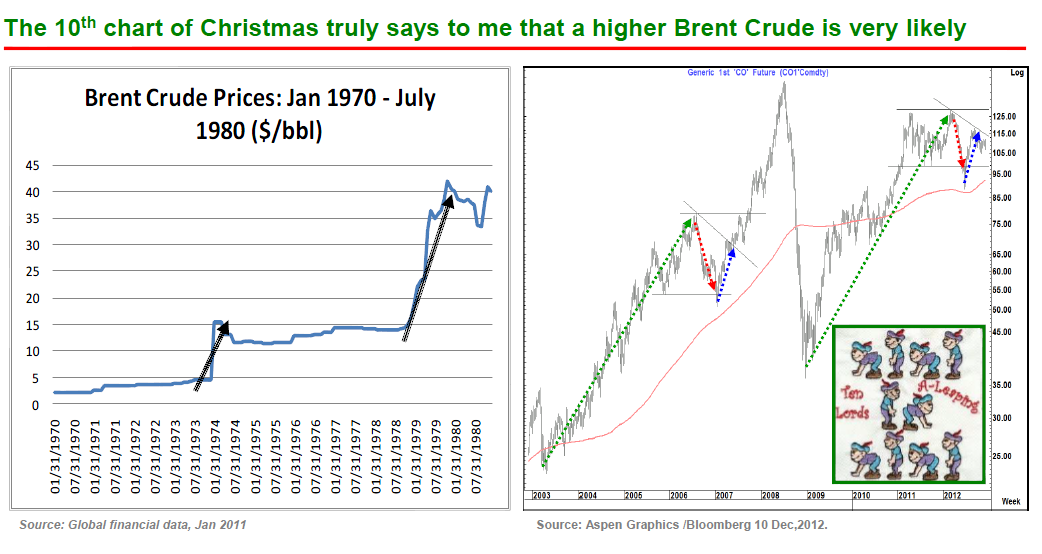 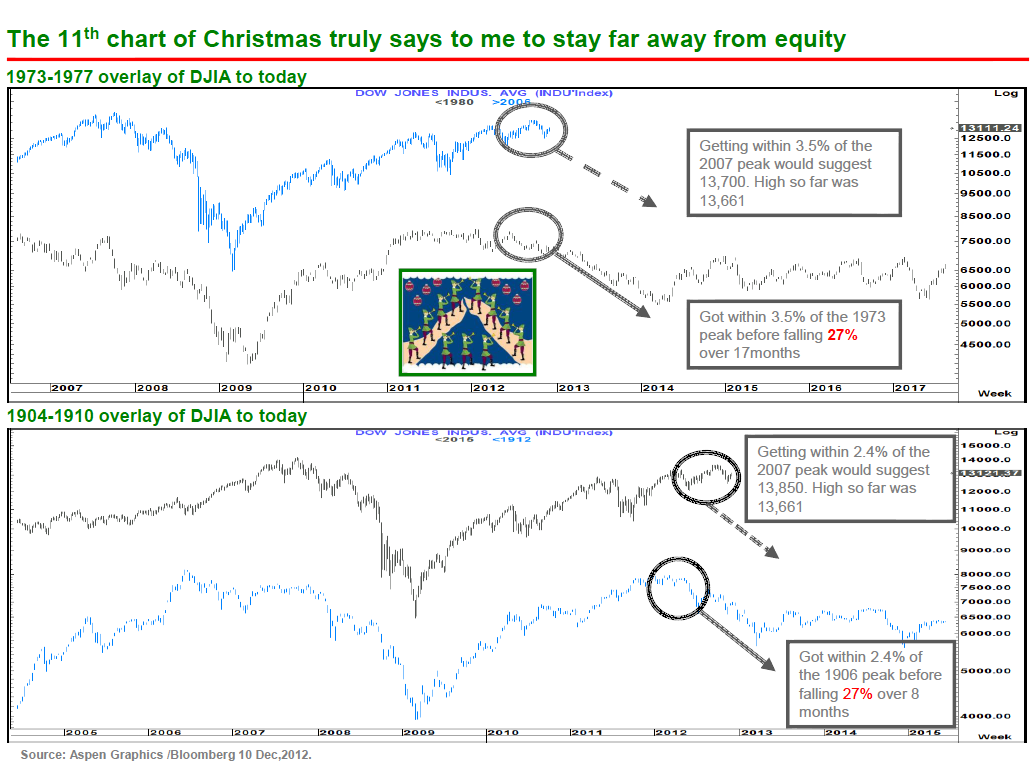 See all 12 charts from CitiFX

I realize that I’ve been obnoxiously bullish throughout the summer (almost to a fault). But I won’t apologize for my sarcasm and belittling of the public perception on the market. Someone had to say it (see here, here, here, here and here). I just couldn’t find any reason to be out of stocks. All that fiscal cliff nonsense and Europe crap was just noise. Remember the media can’t sell advertisements if no one watches/reads. And no one likes to hear good things. Ever wonder why 90% of the 11 o’clock news is horrifying? The headlines need to scare the hell out of you. Otherwise you won’t turn it on, or buy the paper, or subscribe to the magazine, etc.

Price is the only thing in the market that will pay us. Nothing else. Why doesn’t matter. Why has never paid anyone. Ever. Literally, ever. The questions to ask are What and When. The rest is bullshit.

Now, I’m not in the ‘end of the world’ camp. Far from it. But my friend and excellent technician Richard Ross put out a note Friday that brought up some interesting points. (Click Charts to Embiggen) 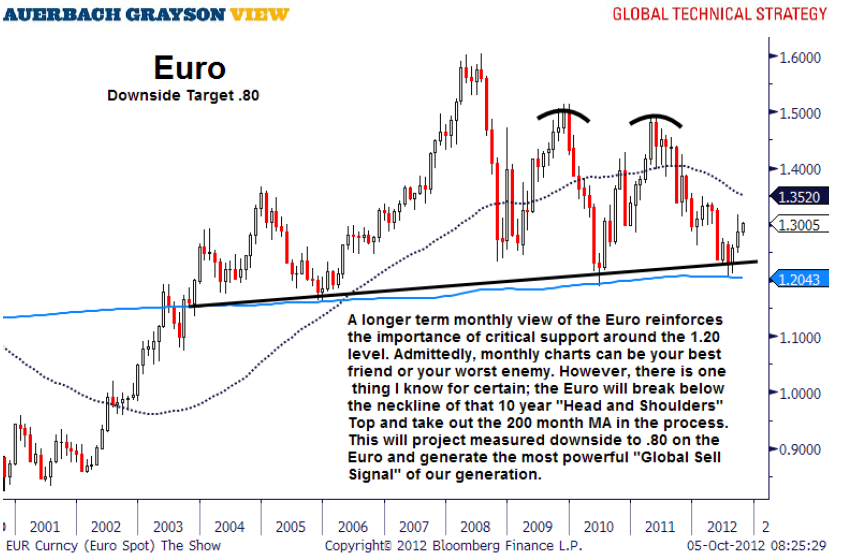 Ross thinks that a Euro breakdown here could, “Generate the most powerful ‘Global Sell Signal’ of our generation” (speaking of scaring the hell out of people).

We still don’t know that the Euro will complete the potential head & shoulders top formation. But we do know that this currency is a majority component of the US Dollar Index. We also know that the Dollar and Stocks have been mostly negatively correlated for years. But can the correlation change? Sure. Can the Euro hold that support and make this conversation meaningless? Sure. Is it important to recognize the possibilities and potential consequences of a breakdown in the Euro? You betcha. And this is regardless of how high you think $AAPL goes or how great that drug might be for your biotech stock.

Speaking of Apple, I put out a bearish note on the stock a couple of weeks back. My entry point may have been early. But I’m still not convinced that we won’t see a meaningful correction in the near future. The comments and ridicule alone after my post is proof in and of itself that the Apple shareholders are lunatics that think the stock can never go down. Real Estate in 2006 anyone?

Back to Ross’ currency analysis – He’s also pointing to a weakening Australian Dollar as a, “Strong Macro Sell Signal”: 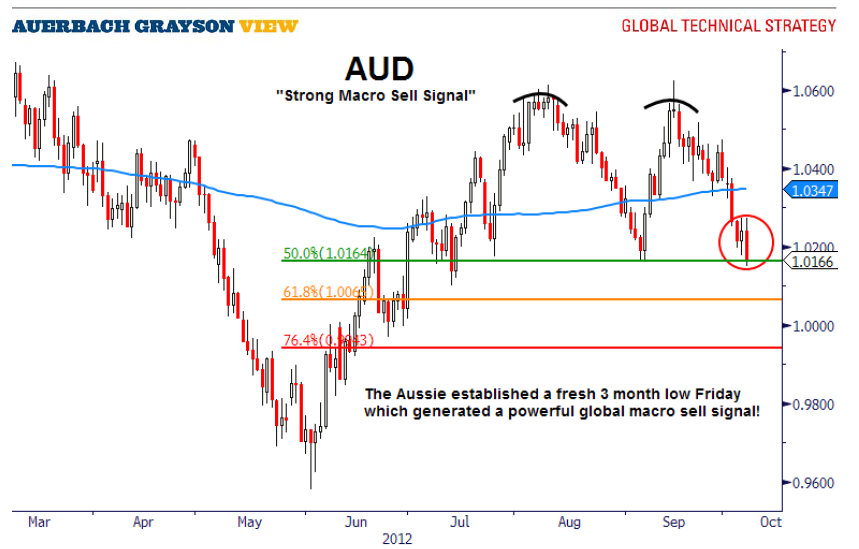 And the Mexican Peso correlation with US Equities: 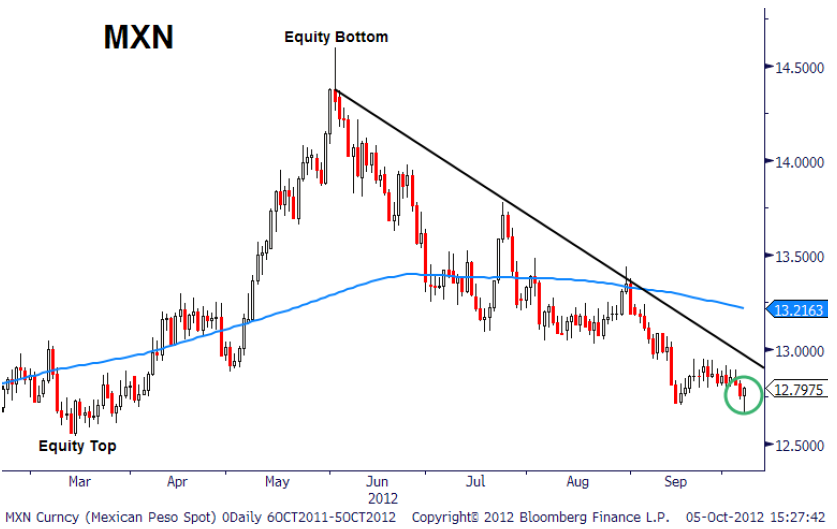 Moving over to commodities, Ross thinks that the divergence we’re seeing in Oil prices could drag stocks lower. As the S&P500 continues to make multi-year highs, Both WTI and Brent have been putting in lower highs and not following the path of US Equities: 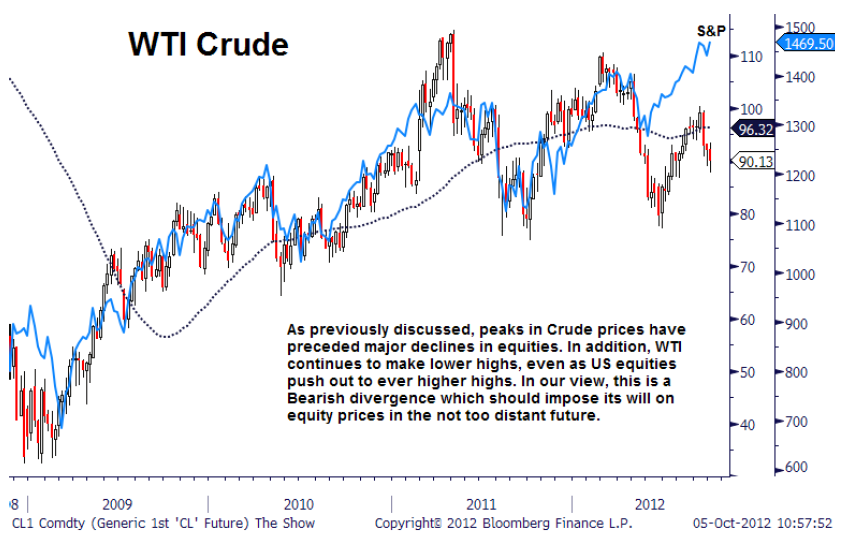 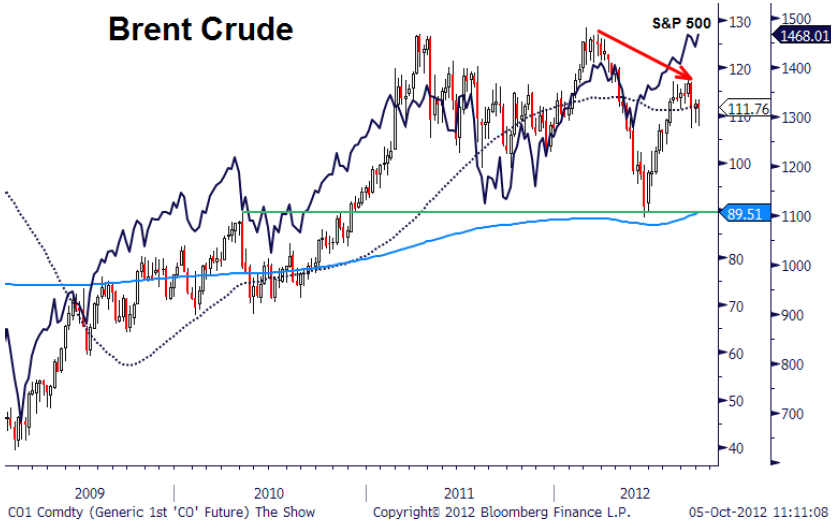 In regards to leaders of this monster stock market rally, Rich Ross looks at India. As the good folks over at the Stock Trader’s Almanac mentioned last week, anything India related was a top performer in the month of September. So a rollover here could suggest weakness for global equities. Ross brings up the flash crash they had this week and reminds us that 2 months after the US flash crash in May 2010, the S&P500 was 15% lower. 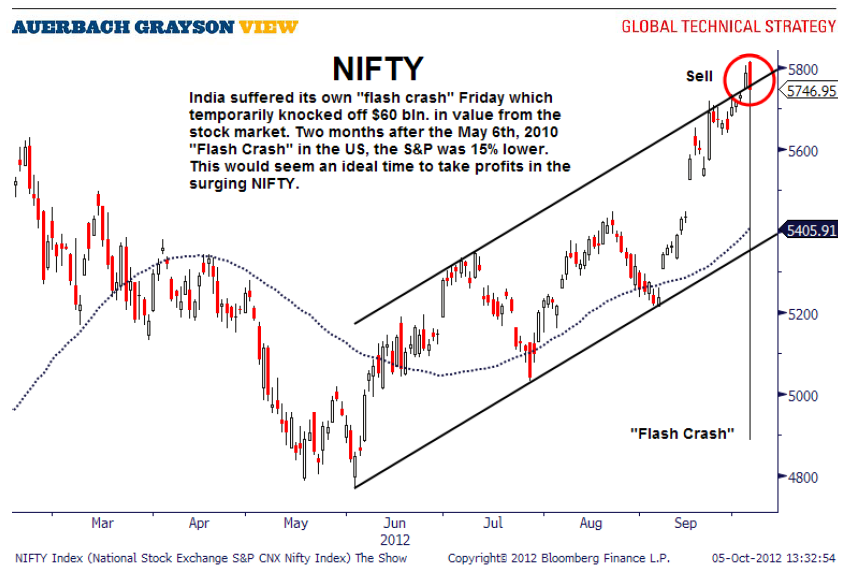 So I think it’s smart to at least consider the bearish case. You have to keep an open mind, otherwise you’re screwed in this business. That’s a fact. Personally, I’m not all that convinced that we crash from here or should expect a monster global risk-off period. I look at US Treasury bonds and don’t see much strength. I think the Euro action has been impressive as of late. And Financials, both absolute and relatively, have demonstrated to us that they may not be the worst sector on earth.

But time will tell. Mr. Market doesn’t give a damn what I think. And things could change quickly. So we’re keeping an open mind. Don’t marry your ideas. And for heaven’s sake, please manage risk properly. Remember – no egos. It’s not about being right. It’s about making money.

Let’s check in on what Louise Yamada thinks about this market. As a young technician, I’ve always looked up to and respected the opinions of my predecessors. And she’s one of the best that ever did it: 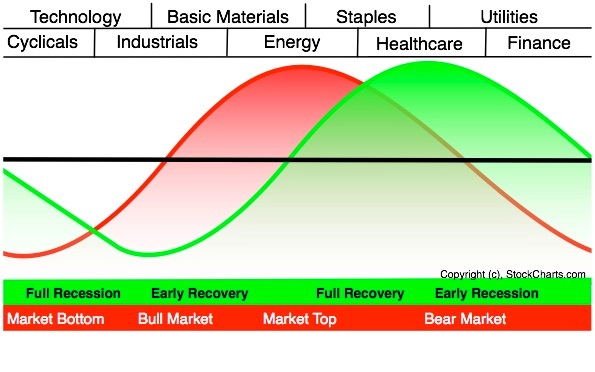 Platinum Set to Retake the Status as “Top Metal” (TheArmoTrader)

Will Gold Breakout Help Crude Oil and S&P500 do the same? (ChrisKimble) 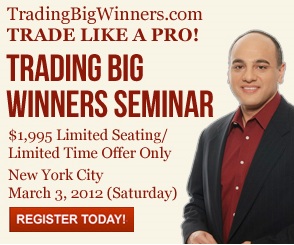