As we enter 2014 this is definitely one of the big things on my radar. From where I’m sitting, it just seems that everyone is convinced that rates are going higher. And maybe they are. But when everyone is this sure of something, I really enjoy taking a closer look at the other side.

Today we’re looking at 10-year yields. I don’t want to get into a whole philosophical conversation about QE or Bernanke or Yellen. I can’t worry about any of that stuff. In my opinion, we need to look at how the market feels about all of that. You see, a lot of people say a lot of things; there’s a ton of noise out there, but price is the only truth that I feel comfortable enough to trust.

Rates are at a very critical level right now. Take a look at the sentiment data, I’ve been talking about it here over the last month. The consensus view is that rates rise. That makes me wonder what would happen if they don’t….

Here is the 10-year Treasury Yield Index. We’re looking at a line chart going back to the 2008 highs. It’s not the cleanest trendline (are they ever?) but we are running into an important downtrend. Also, the December highs were not confirmed by momentum. The most recent highs in rates coincided with the second lower low in momentum last year. 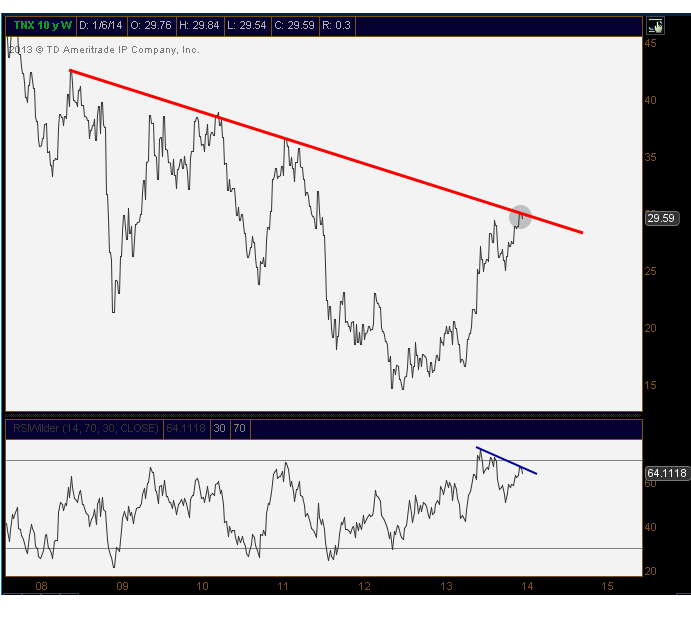 The one positive thing I can say about this weekly chart is the overbought conditions reached in momentum in 2013. As rates fell the last 6 years on this chart, the only extreme readings came from oversold conditions, which is typical of bearish trends. These are the first overbought readings on a weekly time frame since June of 2007. That’s the one good thing I can say about this one.

So that’s the long-term view, mostly bearish. I think where things really get interesting is on a daily time frame. Long time readers of the blog know that my favorite setup is the old overshoot of resistance (or support). In other words, from false moves come fast moves in the opposite direction. We see it all the time in all asset classes on all different time frames. And this one is definitely a candidate.

Look at the highs in rates in early September. Now look how we rallied into the Fed Taper last month and have essentially gone no where since. In fact, we briefly exceeded the September highs in the 10-year right around the holidays before rolling over. Reminds me of a false breakdown in Gold & Silver around the holidays a couple years ago, right before a nice rally in precious metals.

Here is what the 10-year yield chart looks like using daily bars: 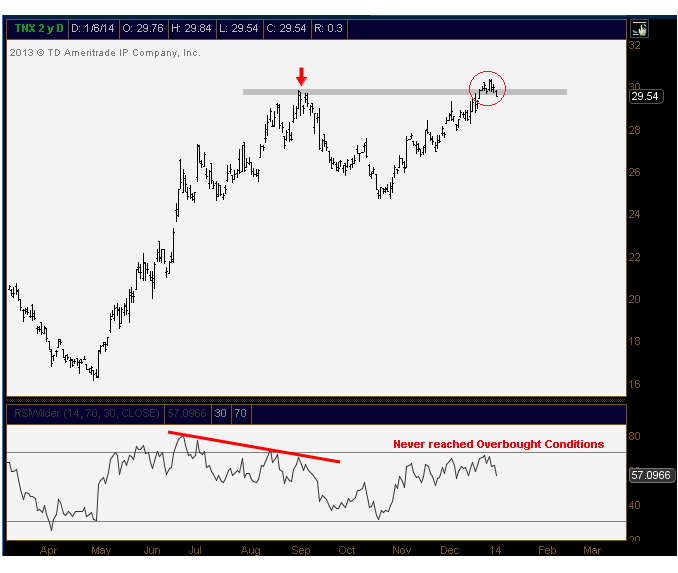 I also want to point to the lack of overbought readings on the most recent highs. This bearish divergence makes me even more bearish on rates. For me to change my mind, I would really want to see the recent highs get taken out combined with some overbought conditions in momentum (I use a 14-period RSI). If that occurs, I’ll ease up on my bearishness (bullishness for bonds).

And let’s remember the way investor sentiment works. They love them at tops and hate them at bottoms. We see this time and time again. When rates rise, bonds sell-off and when rates drop, bonds rally. With that in mind, as we entered 2009 everybody loved US Treasury Bonds. The extreme bullish readings were off the charts. The result was close to a 30% decline in $TLT over the next 6 months. Sentiment towards bonds then plummeted to extreme bearishness that summer and bonds proceeded to rallied of course.

As we entered 2011, they hated bonds once again. Extreme bearishness was again the consensus. No one wanted to buy bonds…..What happened? 30% in 6 months and a total 50% gain during the next year and a half. We’re seeing the same amount of hate for bonds today.

And one last thing, just for fun. After that 50% rally in bonds from 2011 lows, guess what the consensus sentiment was in the summer of 2012? You guessed it – they absolutely loved them. Extreme bullish readings for bonds never seen before in the Barrons Consensus Inc. data published weekly. And you know what happened? Bonds have been selling off ever since, down over 23% into the recent lows.

Now they hate the bonds once again. Do you hate them as well?