I mean is there anyone left who doesn’t know?

But you tell someone that the S&P500 just closed at 3 month highs and they’re bound to punch you in the face. Why? They’re not taking advantage of it. Investors are running away from stocks as fast as humanly possible. It seems like Bullish sentiment hits record lows once a week: Retail investors hate stocks & Wall Street Analysts hate stocks.

Meanwhile, the Retail ETF ($RTH) hit all-time highs this week. ALL-TIME HIGHS. The Dow Jones Industrial Average is a couple of hundred points from 4 1/2 year highs. No matter – the media says the world is coming to an end. So get out mom & pop.

You see how ridiculous this all sounds? Can we stop it with all this nonsense for a minute and take look at what really matters. I mean, just for one minute, can we focus on the only thing that will pay us in this entire world? Is it crazy to think it might be a good idea to ignore the noise and just focus on price? Is it really that far fetched? It seems that way sometimes doesn’t it?

(sorry I had to get that off my chest)

Anyway, from a pure price perspective, the market is telling us a lot. But we actually have to listen. Imagine that? What won’t ever make headlines is what the Consumer Staples are doing relative to the S&P500. It’s boring, so it doesn’t sell. It’s not sexy. But let’s be real – if risk is going to be, “On”, if you will, then Staples ($XLP) should be underperforming the rest of the market.

Look at this chart from Jordan Kotick, Managing Director of Technical Strategy at Barclays. He’s showing how when Staples relative to S&Ps break their uptrend, a stock market rally ensues: 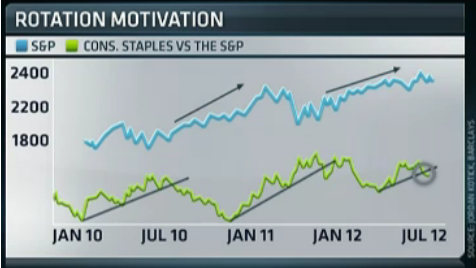 So here is a look at what this ratio looks like right now. The first thing we notice is this week’s break of what I consider to be the most important trendline. I choose to ignore that break in early-May classifying it as a false breakdown that helped the rally get going. Remember this is an art, not a science. And my trendlines are breaking: 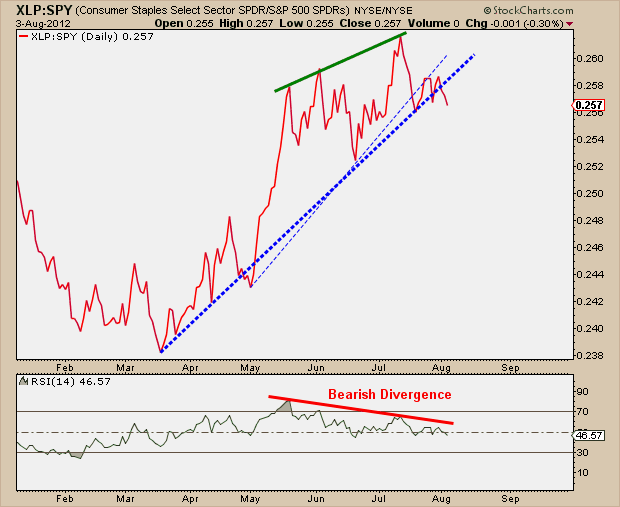 In addition to the deterioration in price, it’s hard to ignore the momentum rollover. While this ratio made new highs in June and July, the Relative Strength Index has consistently been making lower highs. There’s a nasty divergence going on here.

So if the price of this ratio continues to worsen, I would expect this stock market rally to continue. But keeping an open mind is part of the deal. If the data changes, then we have to reevaluate. A recovery back above 0.26 with new momentum highs would negate the impact we’ve just seen $XLP:$SPY have on this bull market.

And yes, this is a stock market rally. This is a bull market. Corrections (like what we’ve seen since Spring) are normal. They’re healthy.

So keep your head up, ignore the noise, and listen to what price is telling us.