I seriously hate trying to pick tops and bottoms. The old saying goes, ‘that it can be the most expensive job on wall street’. So I would much rather spend my days looking for entry points in already trending markets.

But we have to keep a close eye on the S&P500. We trade equities for a living, so how can we not? The question I want to ask is, “Alright, so where are we?”. And the answer isn’t easy. The first thing we want to look at is the successful completion of the five-wave decline from the early April highs. We mentioned this possibility in our June 5th post and so far it’s held. But bottoms are not events, they are usually a process. And since that early June bottom, the S&P500 has been forming the second half of a Head & Shoulders looking pattern. Here is an intraday look using 30-minute timeframes: 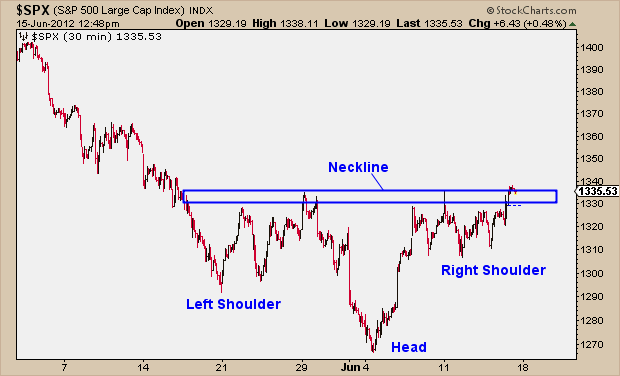 The neckline is right at 1335 and represents the most important resistance on the table right now. The left shoulder, head, and potential right shoulders are nice and symmetrical and this looks like the real deal. A breakout above this neckline and the price target would be about 1400. We arrive at this number by taking the distance from the bottom of the head to the neckline and add it to this potential breakout level.

Getting back to why I hate picking tops and bottoms: just because a possible head & shoulders bottom exists, doesn’t mean that it will pan out exactly as we expect. Go back to 2008 and look at all of the intraday head & shoulders patterns that rolled over and failed.

But the good news is that we have a fixed level of resistance here. It’s taken about a month to form and any breakout above 1335 will give us a pivot point to trade off of. This neckline resistance would become support in the future if this pattern actually is what it appears to be.