One of the biggest stories of the first quarter has been the dramatic rise in bond yields. The Federal Reserve has repeatedly stressed its willingness (even desire) to let the economy run hot. In doing so it has kept the short-end of the yield curve well-anchored. The long-end of the curve, which is impacted by the hopes and fears of bond traders more than pronouncements by the Fed, has seen yields move higher. The yield on the benchmark 10-year T-Note came into the first quarter below 1.0% and has risen above 1.7% as the quarter winds down. The 10-year T-Note yield is finishing the quarter at its highest level since January 2020. As important as the absolute level of bond yields is the turn higher in the longer-term trend and the pace at which that trend is rising. 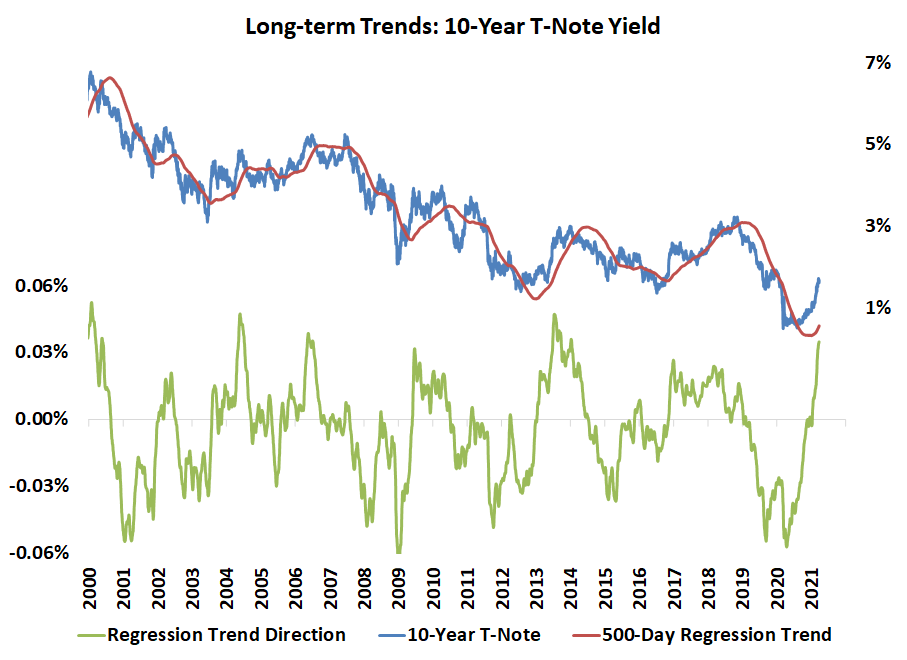 END_OF_DOCUMENT_TOKEN_TO_BE_REPLACED

Apparently, there is a ship stuck in the Suez canal. Pictures show the “Ever Given” container ship turned sideways in the narrow waterway, with its bow wedged on one bank and its stern close to the other bank. This ship, according to the Wall Street Journal, is one of the largest in the world. It’s 400 meters long (longer than the Empire State Building is tall) and can normally move 20,000 containers. In the current situation not only is it not moving its 20,000 containers but has ground to a halt all traffic in both directions in one of the world’s busiest waterways. On average, 55,000 containers travel through the canal on a daily basis, in addition to numerous ships carrying oil and liquified natural gas. The goods are there, but they are not moving. 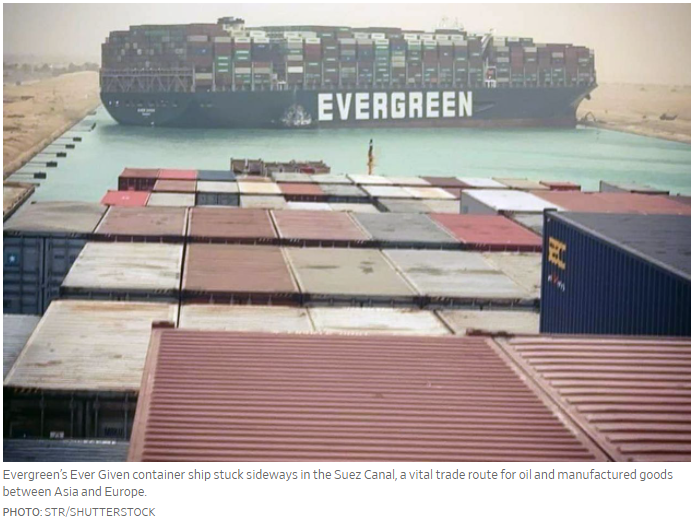 END_OF_DOCUMENT_TOKEN_TO_BE_REPLACED

Rising commodity prices are getting plenty of attention right now, with most of the focus being the inflationary impacts of these recent moves. For context, the CRB commodity index was hitting two-decade lows this time last year as economic uncertainty spiked amid COVID-related shutdowns. Now, with fiscal stimulus providing liquidity and the Fed hoping for the opportunity to let the economy run hot, commodities across the board have broken out to new multi-year highs. Copper bottomed in March 2020, completing a 40% decline from its early 2018 peak (and matching its 2016 low). It has since doubled, reaching its highest level since 2011. Oil prices are back to where they peaked in 2019 and lumber prices are three times higher than they were a year ago. 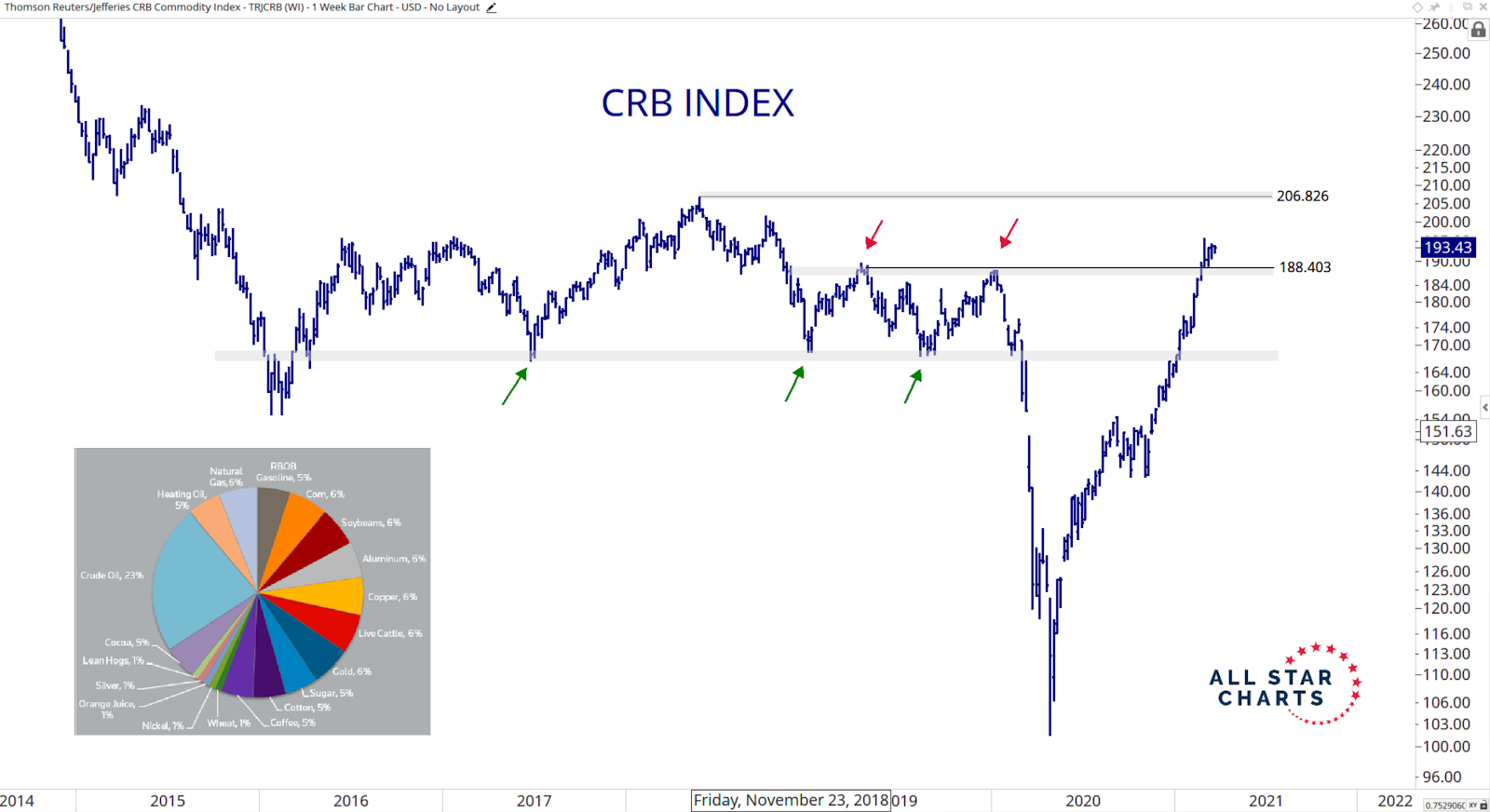 END_OF_DOCUMENT_TOKEN_TO_BE_REPLACED

It’s been over two decades, but policy makers may finally be getting it right. This is not a blanket endorsement of the stimulus bill that is inching its way through Congress and toward the President’s desk. But it is a recognition that after bearing the cost of stimulus, the economy may be poised to reap the benefits of it as well. Wall Street has certainly celebrated excessive liquidity from the Fed. Fiscal stimulus at this juncture may help the Main Street recovery gain momentum and actually exceed expectations. That used to be the norm, though in recent decades recoveries have stalled out before gaining much traction. This has produced a bifurcated economy where those with Wall Street exposure have greatly benefitted and those with Main Street exposure have struggled to keep up. 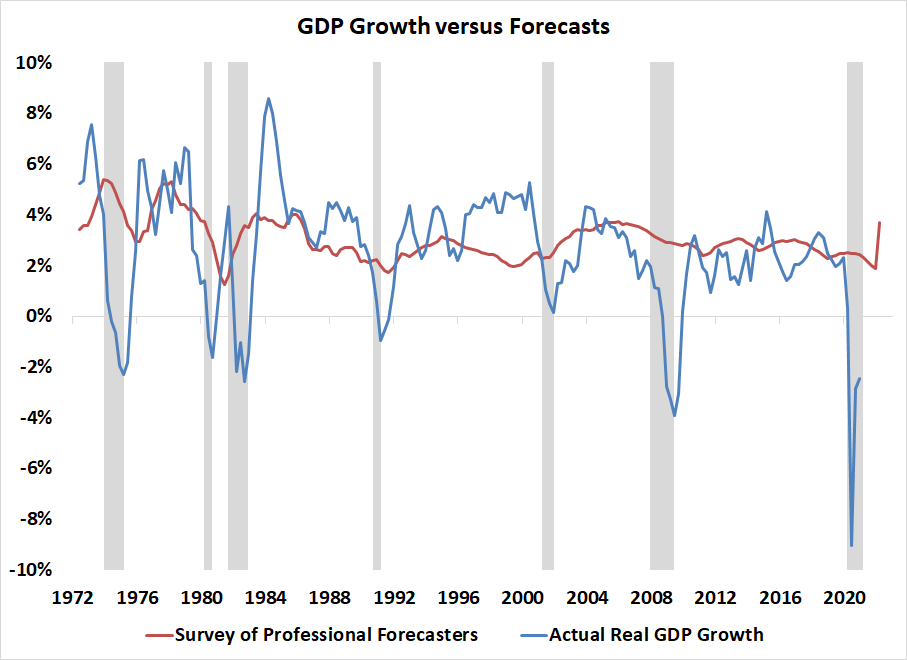 END_OF_DOCUMENT_TOKEN_TO_BE_REPLACED

Have the generals lost their way? Maybe not in an absolute sense, but definitely relative to where the action on the battlefield is taking place. More importantly, does this doom the army to defeat?

Market discussions of generals and their armies usually focus on whether the army is retreating as the generals advance. A very different situation is playing out currently. The mega-cap leaders that have been pacing the market for years (a trend that intensified this time last year as the shock of COVID overwhelmed the world) have been bogged down even as other areas of the market have heated up. So far, at least, it has been a case of marching in place more than actually sustaining losses. Upward pressure on bond yields and the emergence of better opportunities elsewhere could soon turn a relative weakness into absolute weakness. 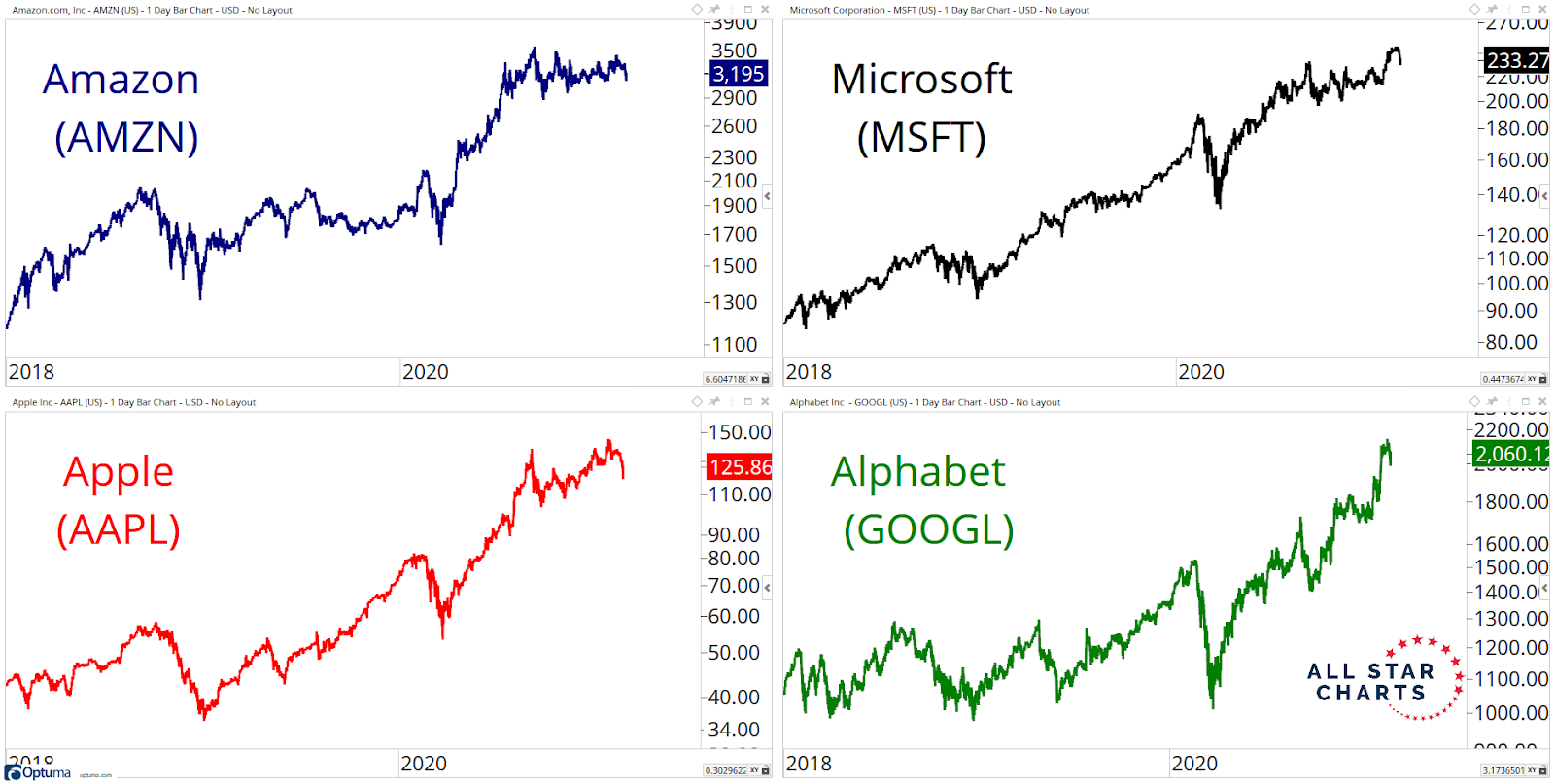 END_OF_DOCUMENT_TOKEN_TO_BE_REPLACED

Nearly three-quarters of the stocks in the S&P 500 have issued Q4 2020 earnings reports. The results have provided some cause for celebration. Earnings are now seen as rising 3%, versus an expected decline of 10% as of Dec. 31st. This is not strictly a function of shifting costs, write-offs and other methods of financial engineering. Sales in the quarter have surpassed expectations by more than 3%, the largest amount on record (going back to 2008). This eclipses the previous record which was set in Q3 2020. Companies in the S&P 500 have weathered the COVID-crisis much better than analysts had expected and that is being reflected in stock prices. 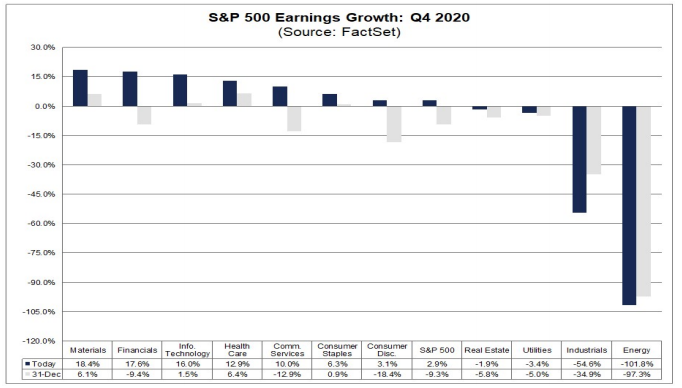