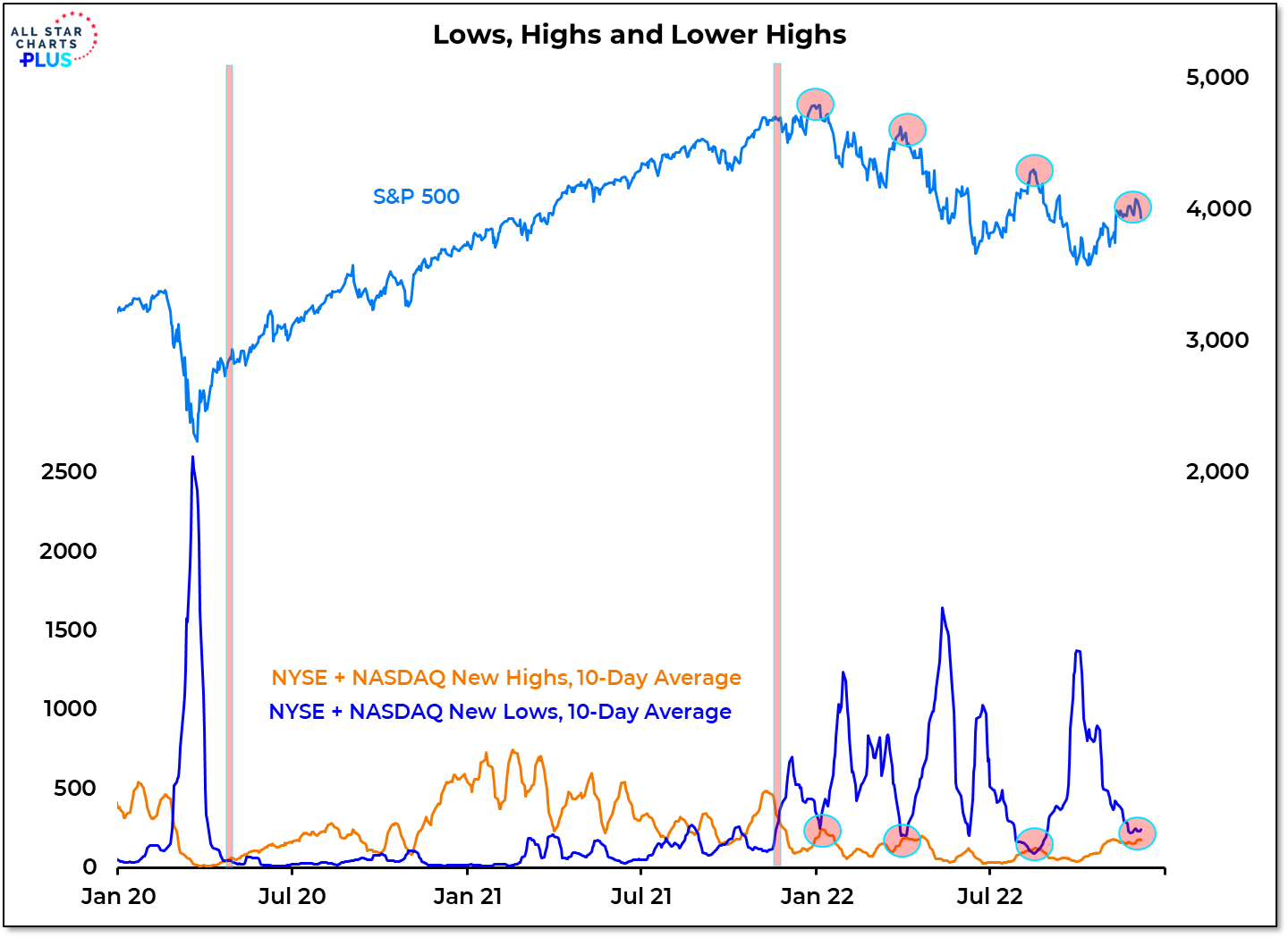 The S&P 500 continues to make lower highs as new lows have approached, but not broken below, new highs. This breadth signal occurred as the S&P 500 was peaking in January. It re-emerged near the March and August highs and appears to be doing so again.

Why It Matters: New high versus new low crossovers are usually fueled more by changes in the new low list than the new high list. New highs edge up slowly in the early stages of a bull market and can peak well before the indexes. The post-COVID bull market was a great example of that. But regardless of the driver, history shows it is important that they take place. As the longest bear market since the Financial Crisis has moved along, investors have been itching to turn more optimistic. But so far the price action (on the surface and below) isn’t doing much to change anyone’s mind or give rise to the increase in bulls needed to have a bull market.

In this week’s Sentiment Report we take a closer look at persistent pessimism and how investors so far haven’t matched word with deed.

END_OF_DOCUMENT_TOKEN_TO_BE_REPLACED 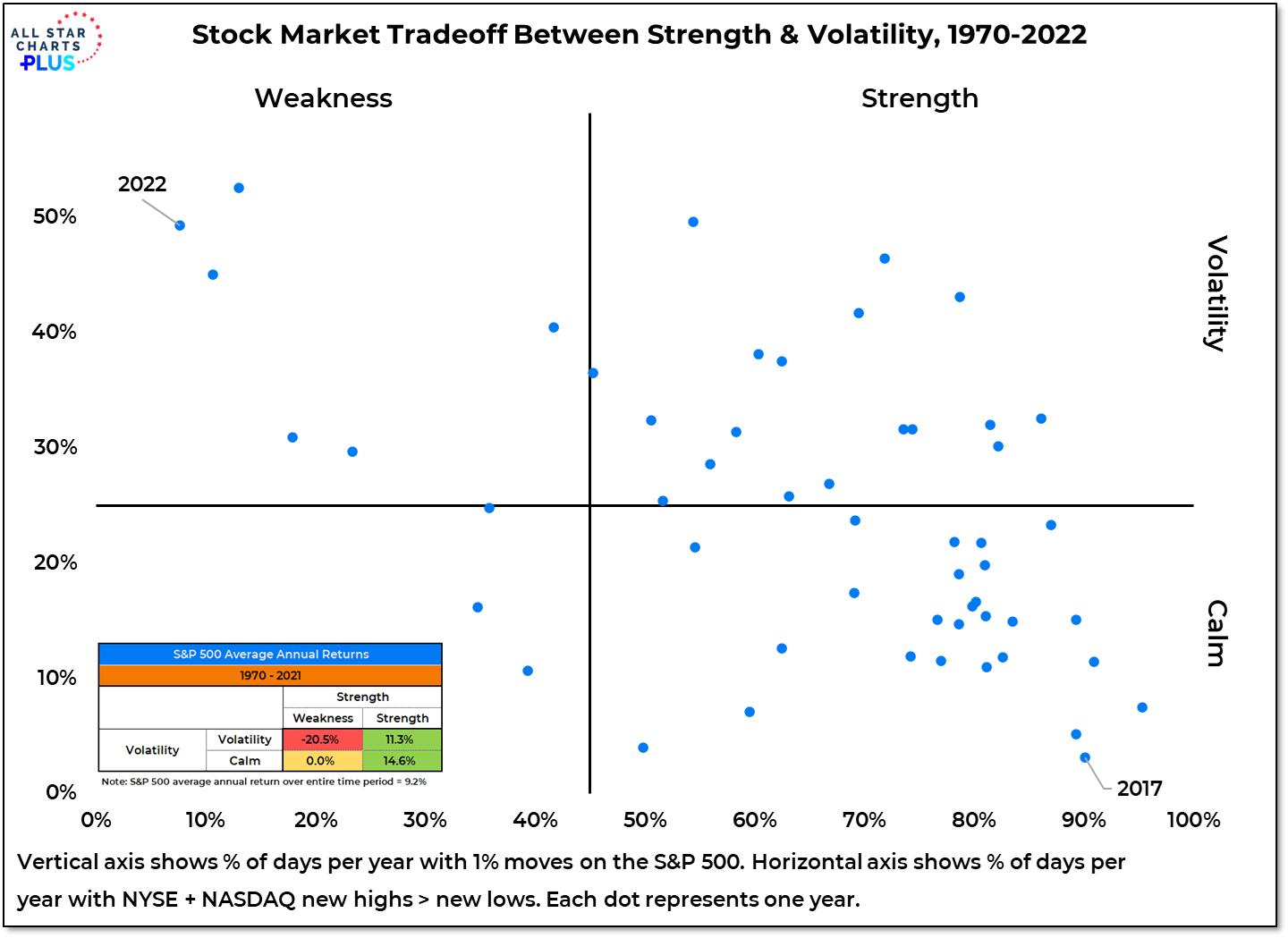 The S&P 500 just experienced its longest stretch without a 1% daily swing since Thanksgiving week 2021. But moving from volatility to calm is just part of the needed rotation. It will be difficult for bulls to stay optimistic if the market is not able to rotate from weakness to strength.

Why It Matters: Some of the most challenging years for the stock market in the past half century have had a combination of weakness and volatility similar to what has been experienced in 2022. The best gains have tended to come in years when the market has been calm and strength has been persistent. 2017 is a prime example of this. The recent ebbing in volatility provides some hope that conditions are improving and that the experience of the first three quarters of 2022 is receding into the past. The odds of a better market environment are greater on a shift from weakness to strength than from volatility to calm.

In this week’s Sentiment Report we take a closer look at the rise in optimism that has come as investors have responded to calmer conditions by hoping that sustained strength will soon follow.

END_OF_DOCUMENT_TOKEN_TO_BE_REPLACED 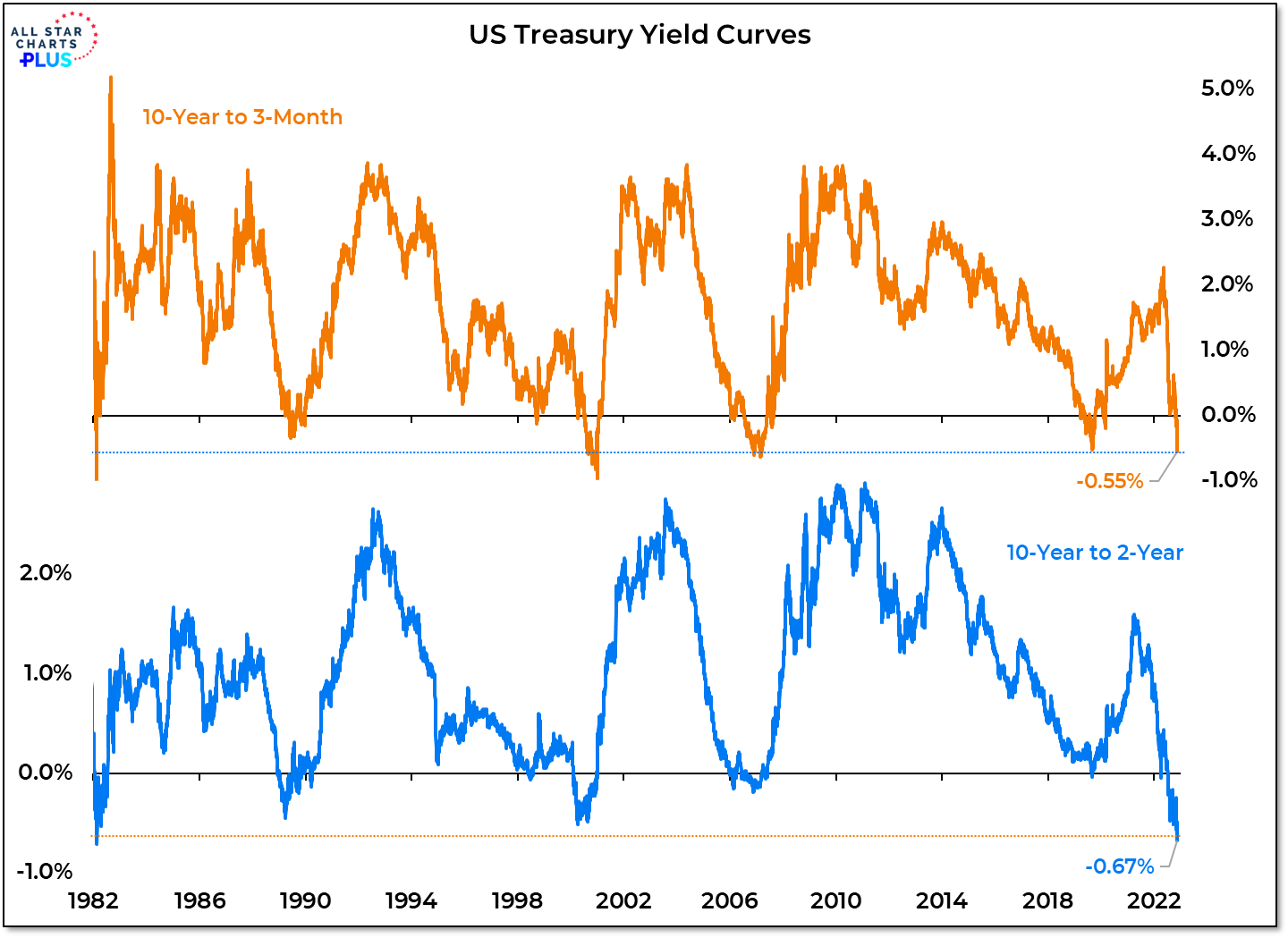 Why It Matters: Yield curves invert (short-term yields become higher than longer-term yields) when the bond market thinks that the Fed has already or will soon become too restrictive for the economy to remain healthy. It is the market betting that the Fed will have to cut rates, bringing down yields at the short-end of the curve. Inverted yield curves are a sign of macro stress and have historically been reliable forecasters of recession. The depth of the current inversions is a warning signal from the bond market, a call for caution on the economy and earnings (and by extension, stock prices). It’s not just happening in the US – except for one blip during 2008, the spread between German 10-year and 2-year bond yields is at its lowest level in three decades.

In this week’s Sentiment Report we take a closer look at how equity investors are feeling following last week’s big rally (the 9th weekly gain of 3% or more for the S&P 500 so far this year).

END_OF_DOCUMENT_TOKEN_TO_BE_REPLACED 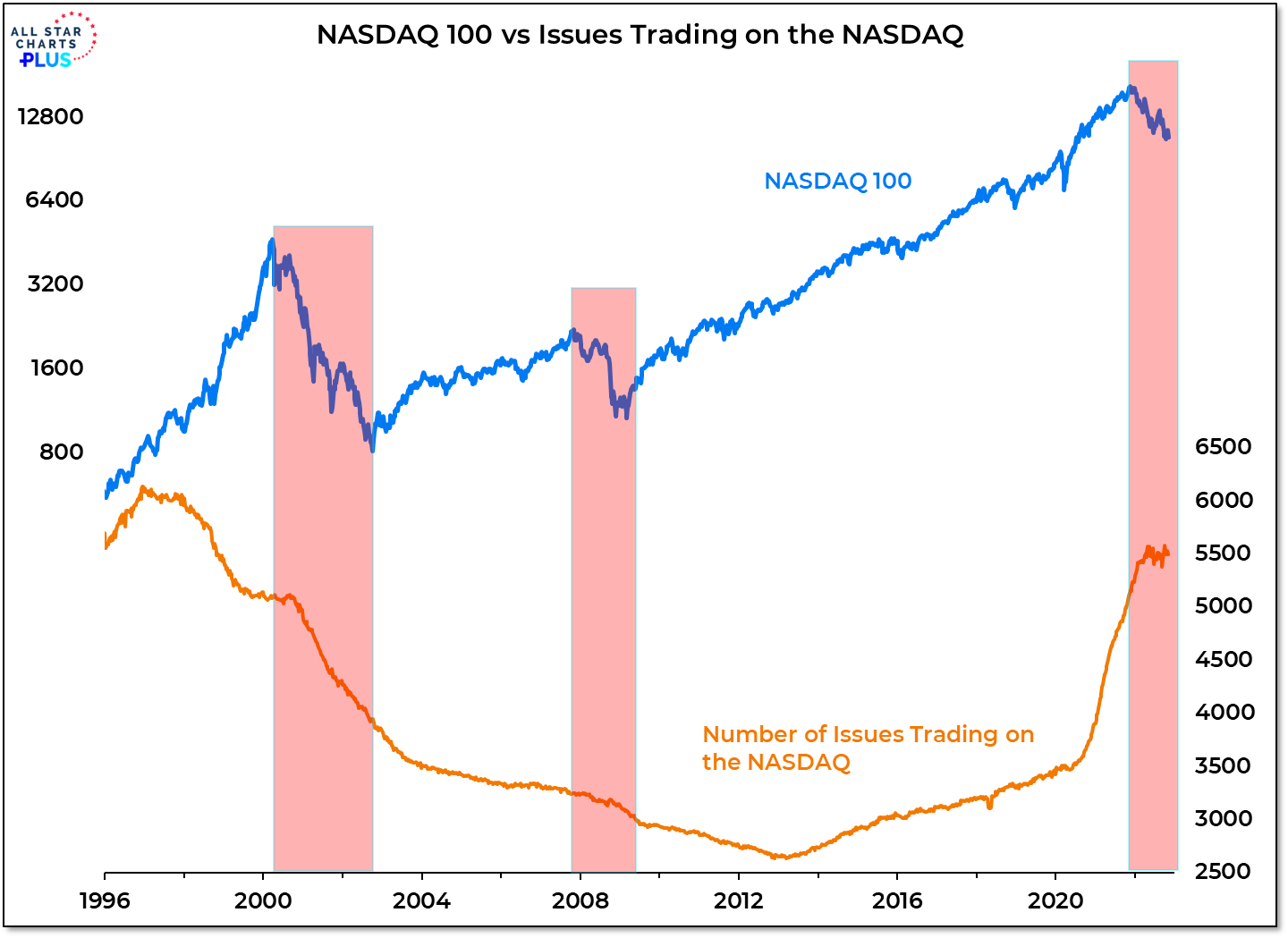 Why It Matters: The number of issues trading on the NASDAQ topped out at over 6000 in 1997. By the time the NASDAQ 100 peaked in 2000, this number was already approaching 5000. As that bubble burst, the number of issues traded on the NASDAQ collapsed (dropping to 3500 by the end of 2003). Listings declined further during the Financial Crisis. The Technology sector has led the way lower in the current bear market and many former higher flyers are trading at pennies on the dollar. But listings on the NASDAQ have actually expanded since the index peaked nearly a year ago. It’s hard to think about the market healing when defunct companies haven’t yet been shown the door.

In this week’s Sentiment Report we take a closer look at how options traders are feeling and what it might take from a sentiment perspective for the stocks to hold true to typical post-midterm election tendencies.

END_OF_DOCUMENT_TOKEN_TO_BE_REPLACED 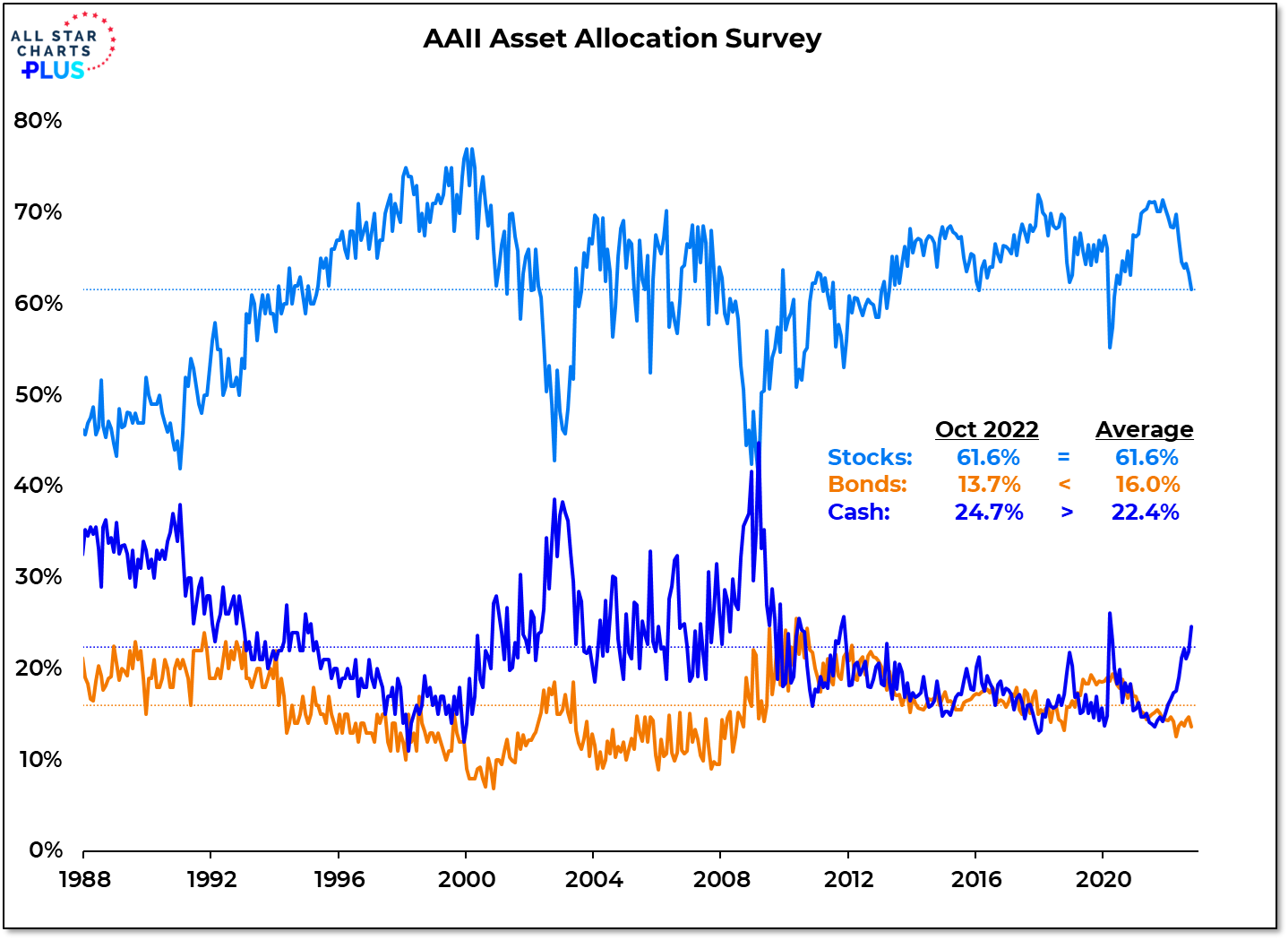 Why It Matters: Moods are sour, but for all the talk of rampant pessimism & historic levels of bearishness, individual investors have not abandoned stocks. This is as evident in the AAII asset allocation survey as it is in the latest ETF flow data. For the amount of pessimism that is being seen elsewhere, there is relatively little cash on the sidelines. If there is an underowned and unloved asset class it is either bonds or commodities, not stocks.

In this week’s Sentiment Report we take a closer look at how investors are feeling and how that squares with what they are doing.

END_OF_DOCUMENT_TOKEN_TO_BE_REPLACED 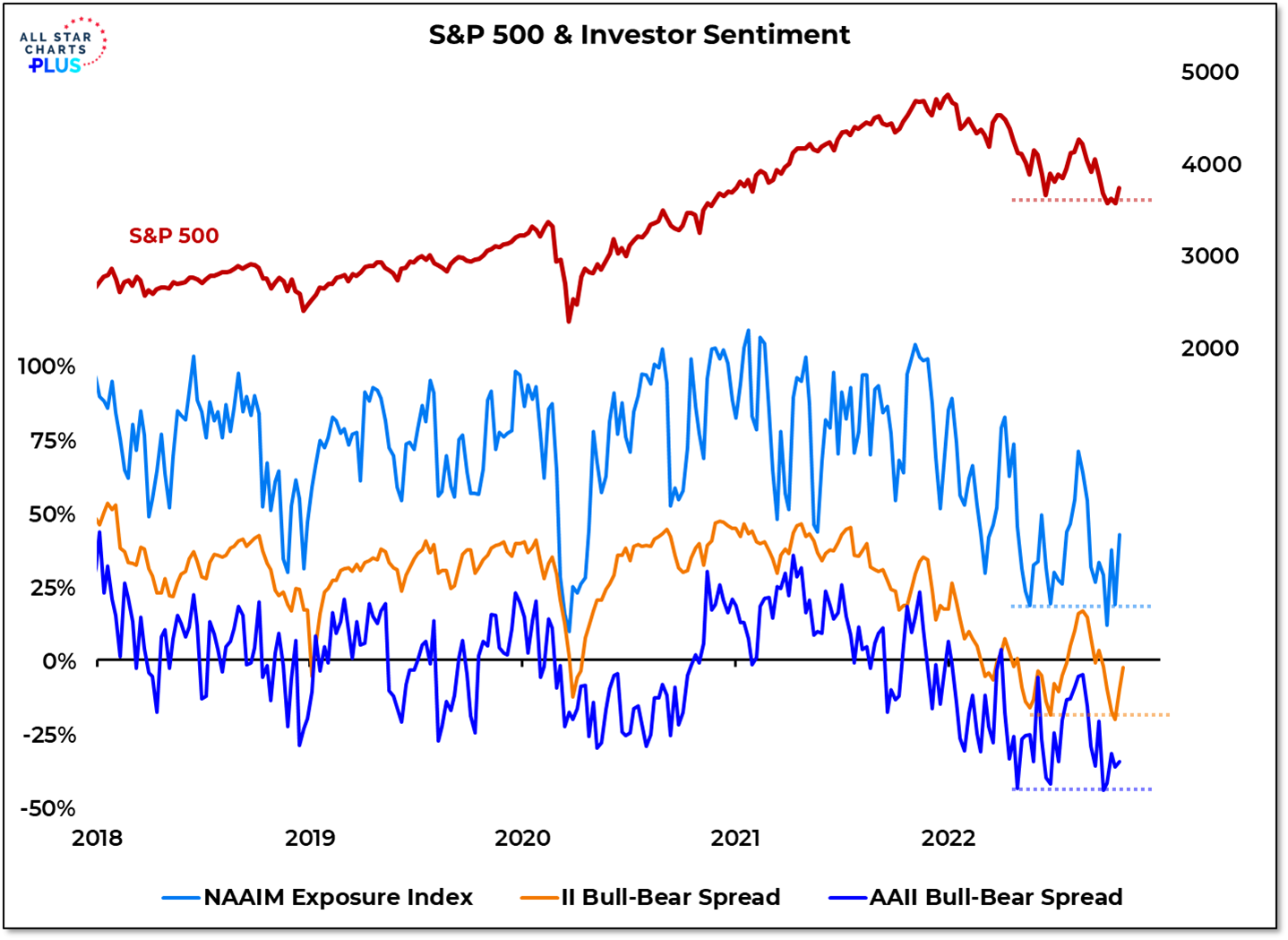 The S&P 500 this month and last undercut its June low but it is now back above that key level. The same can be said from a sentiment perspective. The NAAIM Exposure index and the Bull-Bear spreads for Investors Intelligence and AAII in recent weeks dipped below their Q2 lows but have since recovered.

Why It Matters: Important lows often get re-visited one last time before trends turn and rallies become sustainable. It will be a lot easier for stocks to build on recent strength if optimism is increasing. It does indeed take bulls to have a bull market. Confirmation that this was just a test is twofold: staying above the Q2 lows and continued improvement beneath the surface (including seeing more stocks make new highs than new lows).

In this week’s Sentiment Report we take a closer look at how investors are feeling and how (if at all) we can take advantage of it.

END_OF_DOCUMENT_TOKEN_TO_BE_REPLACED 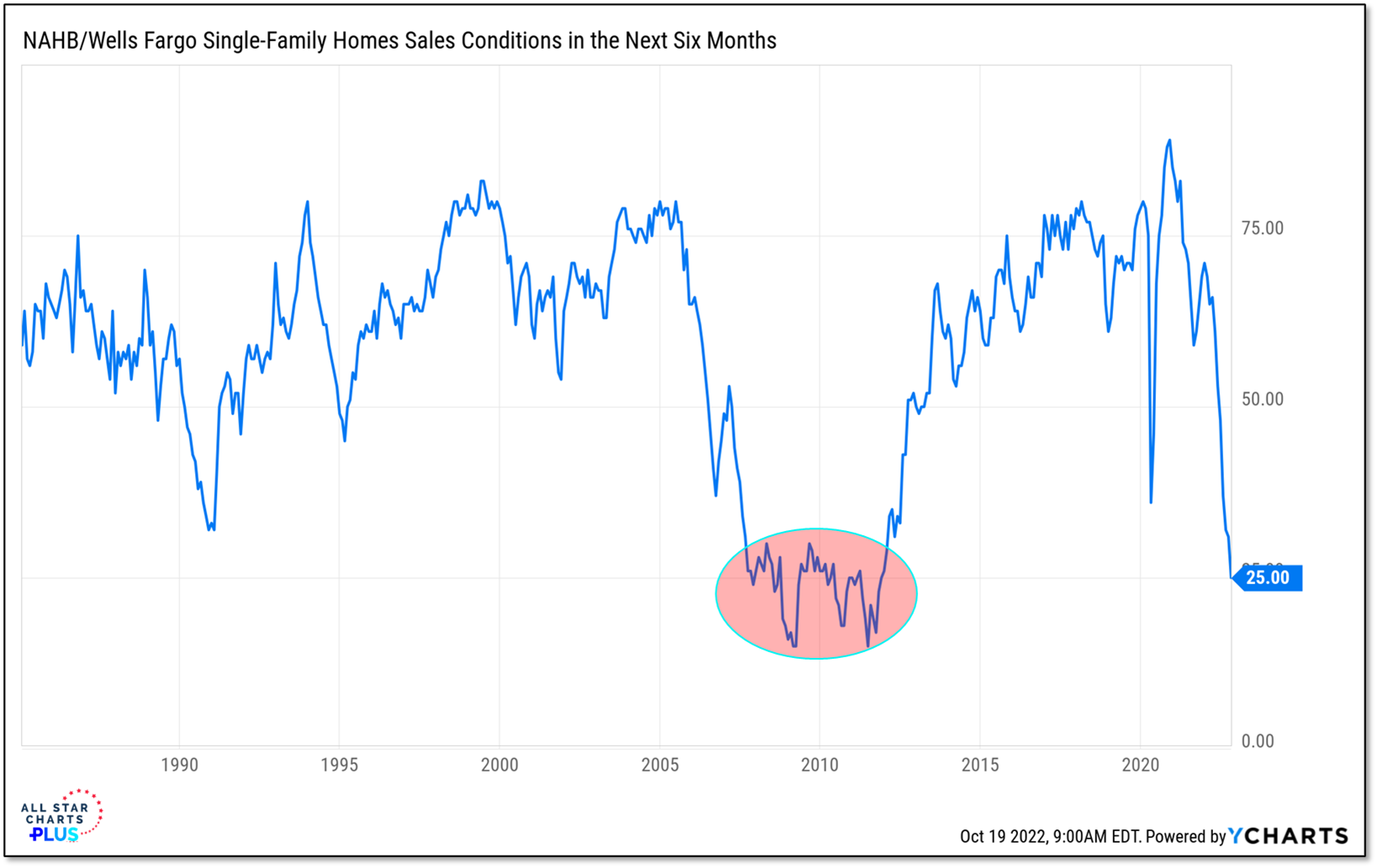 Mortgage rates are soaring and housing market conditions are deteriorating. Sentiment is sour in both the financial markets and the economy.

The Numbers: Expectations for home selling conditions are at a level that have been seen leading up to, through, and in the wake of the financial crisis. This isn’t an isolated report and its both sides of the market. Data from the University of Michigan shows that the fewest survey respondents since the early 1980’s see this as a good time to buy a house (and that was prior to the most recent spike in mortgage rates).

Why It Matters: Economic sentiment, whether on buying houses or CEO confidence, is usually self-fulfilling. This may seem to be at odds with the idea of using sentiment as a contrarian indicator, but it isn’t all that different. We can look at past sentiment extremes to gauge the possibility that moods have moved too far, but it takes bulls to have a bull market in the same way it takes optimism to have an economic expansion.

In this week’s Sentiment Report we take a closer look at the persistent pessimism that can be seen across the market. While the conditions might be ripe for a rally, the longer the bears have the upper hand, the more risk there is to stocks.

END_OF_DOCUMENT_TOKEN_TO_BE_REPLACED

When They All Look Higher, Watch Out Below 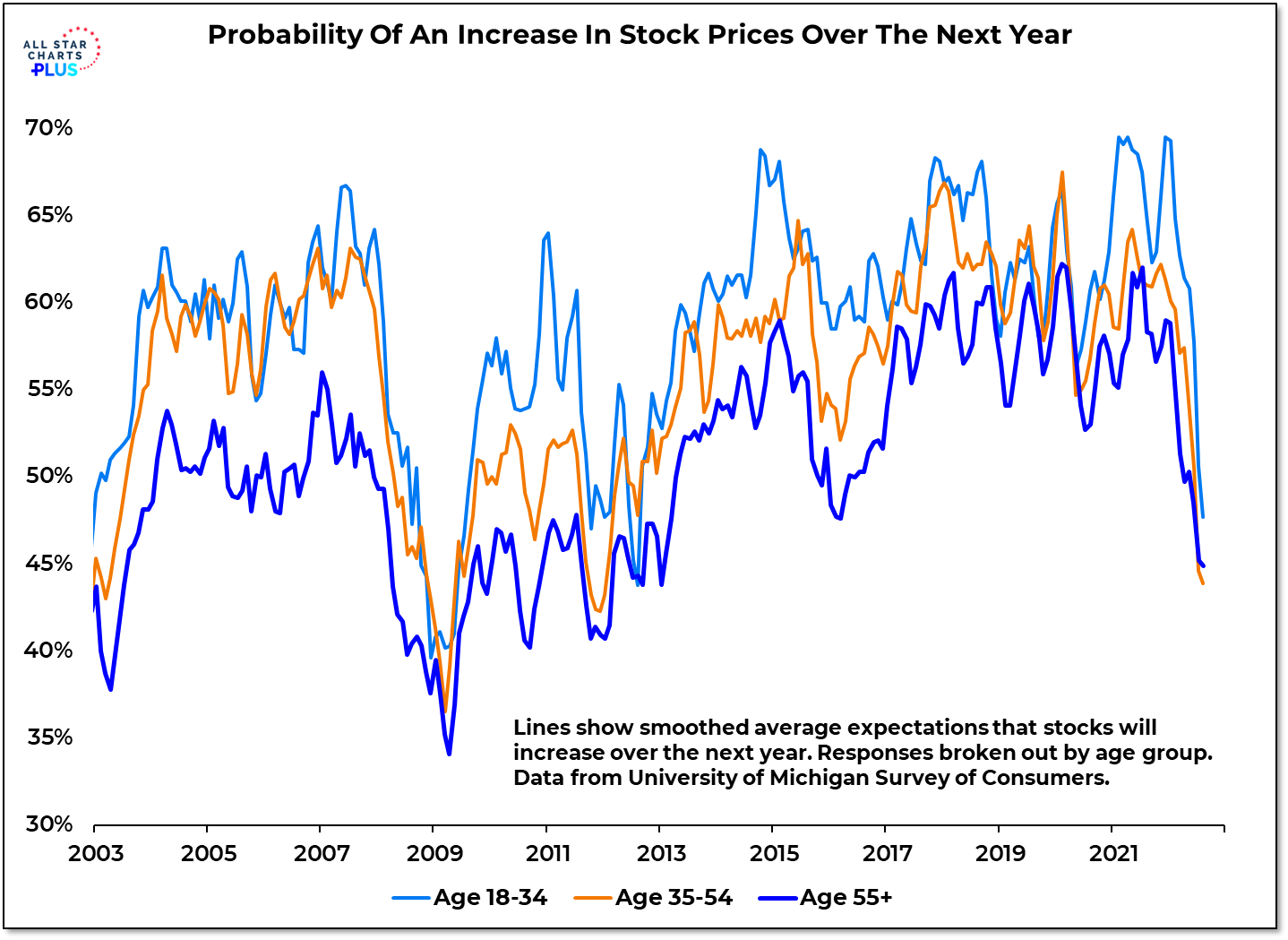 Young investors were swept away in the 2021 speculative bubble and came into 2022 with lofty expectations.

The Numbers: The University of Michigan Survey of Consumers shows that a record 70% of investors in the 18-34 age group came into 2022 expecting that stocks would rise over the course of the year. For the 35-54 age group it was 61% and for those 55+ it was 59%. As of August, all three groups were below 50%, with expectations among younger investors getting more in line with those who have been through more market cycles.

Why It Matters: Young investors are learning liquidity lessons in 2022 that are as important as they are painful. Investors of all ages are having to reckon with a less favorable backdrop going forward than persisted in recent years. While expectations for the year ahead are now off their extremes, they don’t look historically washed out at current levels.

In this week’s Sentiment Report we take a closer look at what investors are saying, what they are doing, how sentiment now looks like it did in March 2009, but also July 2008.