Key Takeaway: Investors are identifying with fear and pessimism as bears dominate the surveys. But we have yet to see the type of pessimism that drives market participants to do something about it. The disconnect between what investors are saying and what they are actually doing is evident in the juxtaposition of bearish surveys and elevated stock allocations. This speaks to an underlying confidence that remains unbroken and a lingering optimism susceptible to further unwind. Combined this with lackluster breadth readings, our global trend indicators nearing new lows, and a general lack of risk appetite and it’s difficult to claim the unwind in sentiment is complete. 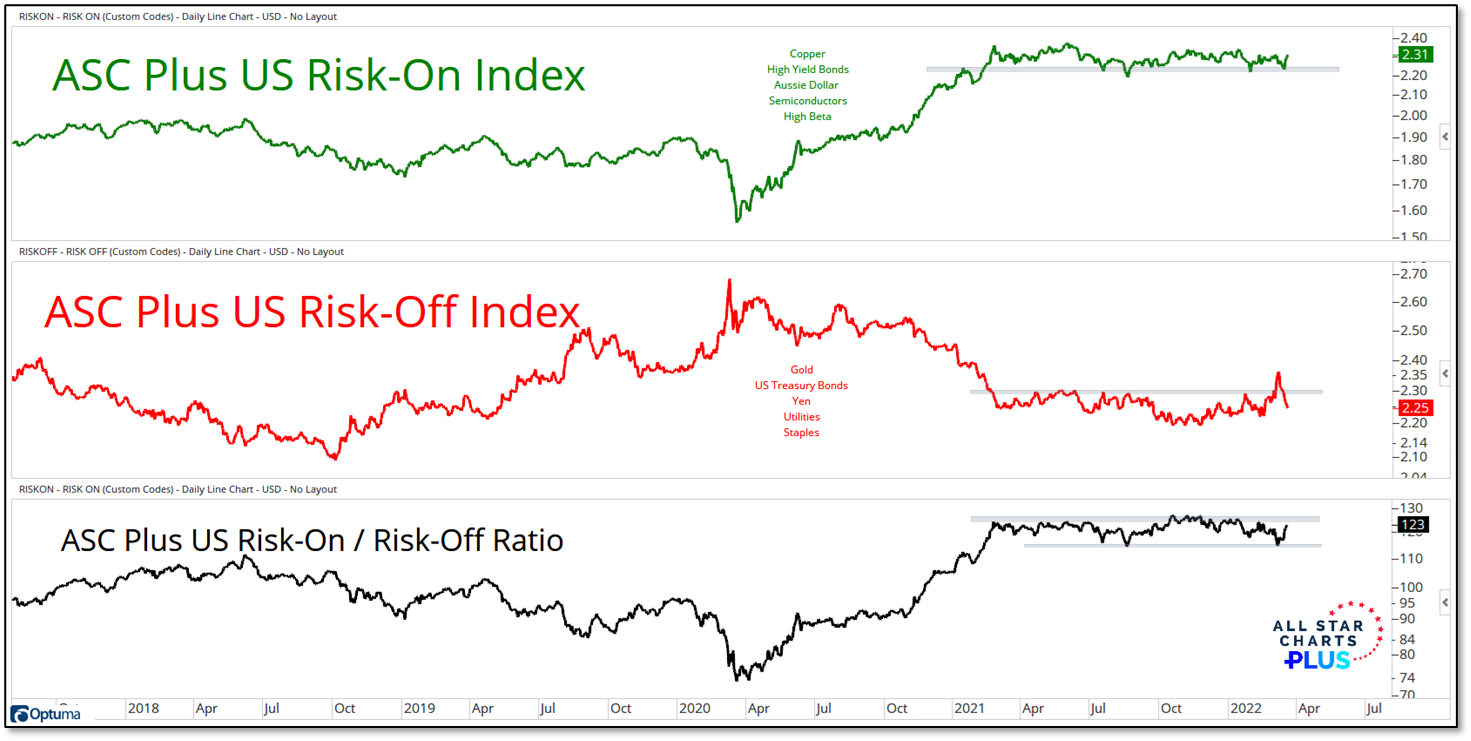 Even with historical context, identifying real-time sentiment extremes is a challenge. It is said, “nothing changes sentiment like price,” and I would add the caveat that price does not always persist. Seeing evidence that a price move can be sustained can add conviction that a durable sentiment turn has occurred. In that regard, our risk on & risk off indicators will be important guideposts. If we see evidence that risk appetite is returning, the sentiment conversation can more easily turn from unwinding to rebuilding optimism. The headfake from the risk off index is encouraging, but for now our risk-on/risk-off ratio continues its year-long sideways chop.

END_OF_DOCUMENT_TOKEN_TO_BE_REPLACED

Key Takeaway: There is abundant focus on weekly and monthly surveys showing evidence of investor pessimism with regard to equities. This is at odds with the strategic positioning indicators showing that stocks are expensive and households are historically over-exposed to equities (relative to bonds, but also relative to bonds plus cash). The last two times that II bears exceeded bulls (in 2019 and 2020), household asset allocation data showed only 53% exposure to equities. As of the end of 2021, it was at 62%, an all-time high. So while investors may be identifying themselves as bearish, there is little evidence that investable cash is on the sidelines. With the Fed now raising rates and the market re-considering valuation levels, this lack of available firepower could weigh on equities. Whether today’s pessimism represents a cyclical extreme remains to be seen. 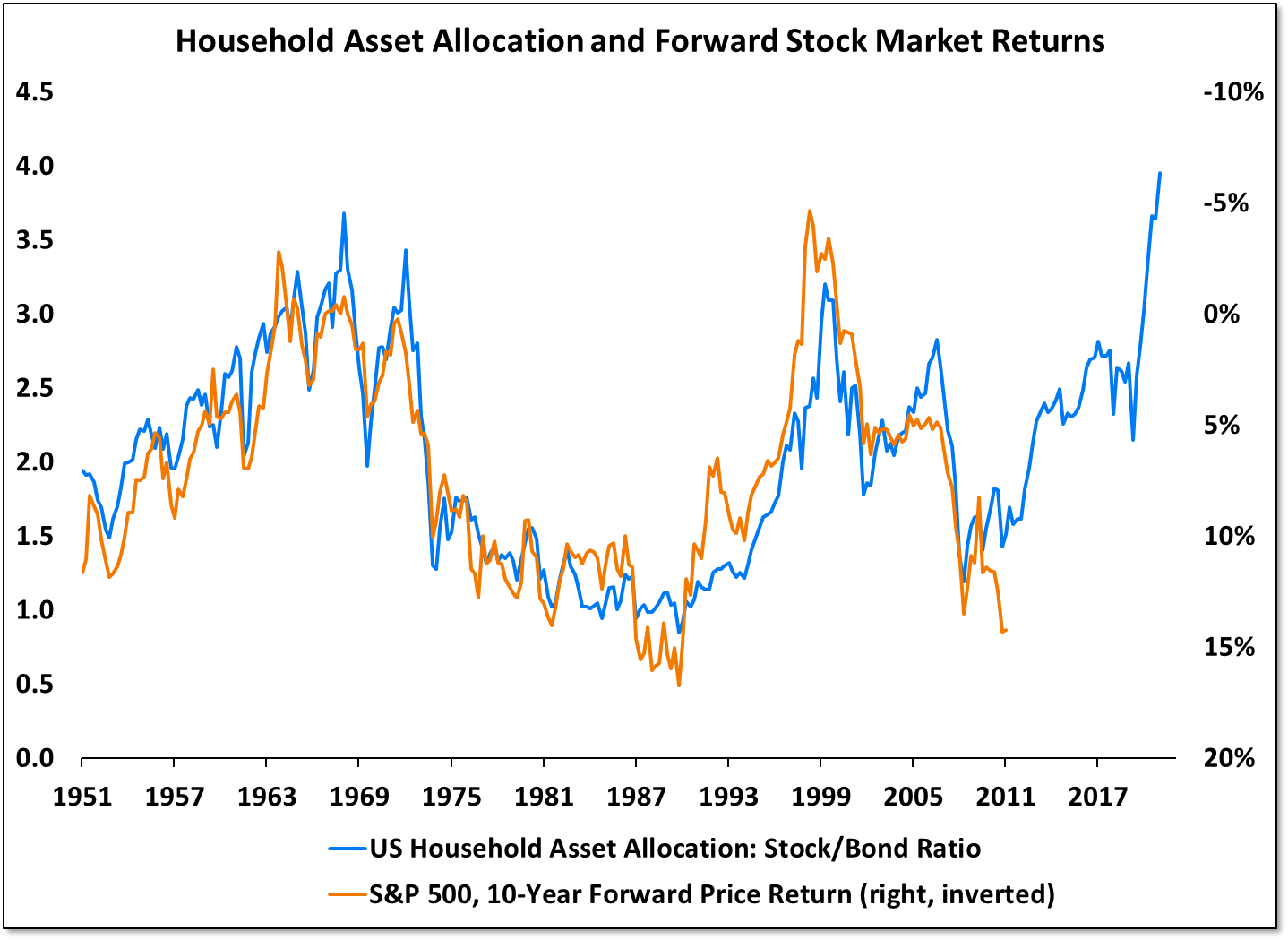 US households finished 2021 with their highest level of equity exposure on record. Households had 62% exposure to stocks, 16% exposure to bonds and 22% exposure to cash.This is quarterly data, meaning it doesn’t reflect changes in market value or fund flows that have occurred this year. Nonetheless, there is a strong inverse relationship between equity market exposure (relative to bonds) and forward returns for the S&P 500 that goes back to the 1950s. If this relationship holds going forward, stock market returns could be disappointing for an investing public that has gone all in for equities.

END_OF_DOCUMENT_TOKEN_TO_BE_REPLACED

Key Takeaway: Put/call ratios are high, there are more bulls than bears on both the AAII and II surveys (a rarity over the past decade) and active investment managers have slashed equity exposure. If the conditions that have been in place since the Financial Crisis lows (which occurred this week in 2009) are still in place, it is hard to argue that sentiment is not a meaningful tailwind for equities and is fuel for a rally. Two cautions: Sentiment is a condition, but rarely a catalyst. This means price action needs to improve to bring bulls back on board. But more significantly, there is still evidence that the speculative unwind that began last year is still ongoing and strategic positioning indicators show little improvement that would indicate longer-term risks are subsiding. Those get exacerbated as the Fed starts to raise interest rates and withdraw liquidity.

END_OF_DOCUMENT_TOKEN_TO_BE_REPLACED

Key Takeaway: Optimism wanes, and pessimism builds as the II bull-bear spread narrowed last week to just 1.2%, down more than 4% from the previous week. That brings the spread to its smallest difference since early April 2020. But it’s not until bears outnumber the bulls that we reach levels associated with significant market bottoms. Nevertheless, a surge in pessimism could become reality with active equity managers continuing to reduce exposure, consensus bulls dropping, and major equity indexes testing their respective January lows. Whether sentiment has completely unwound or is still in the process of unwinding is yet to be determined.

Sentiment Report Chart of the Week: Unwound or Unwinding 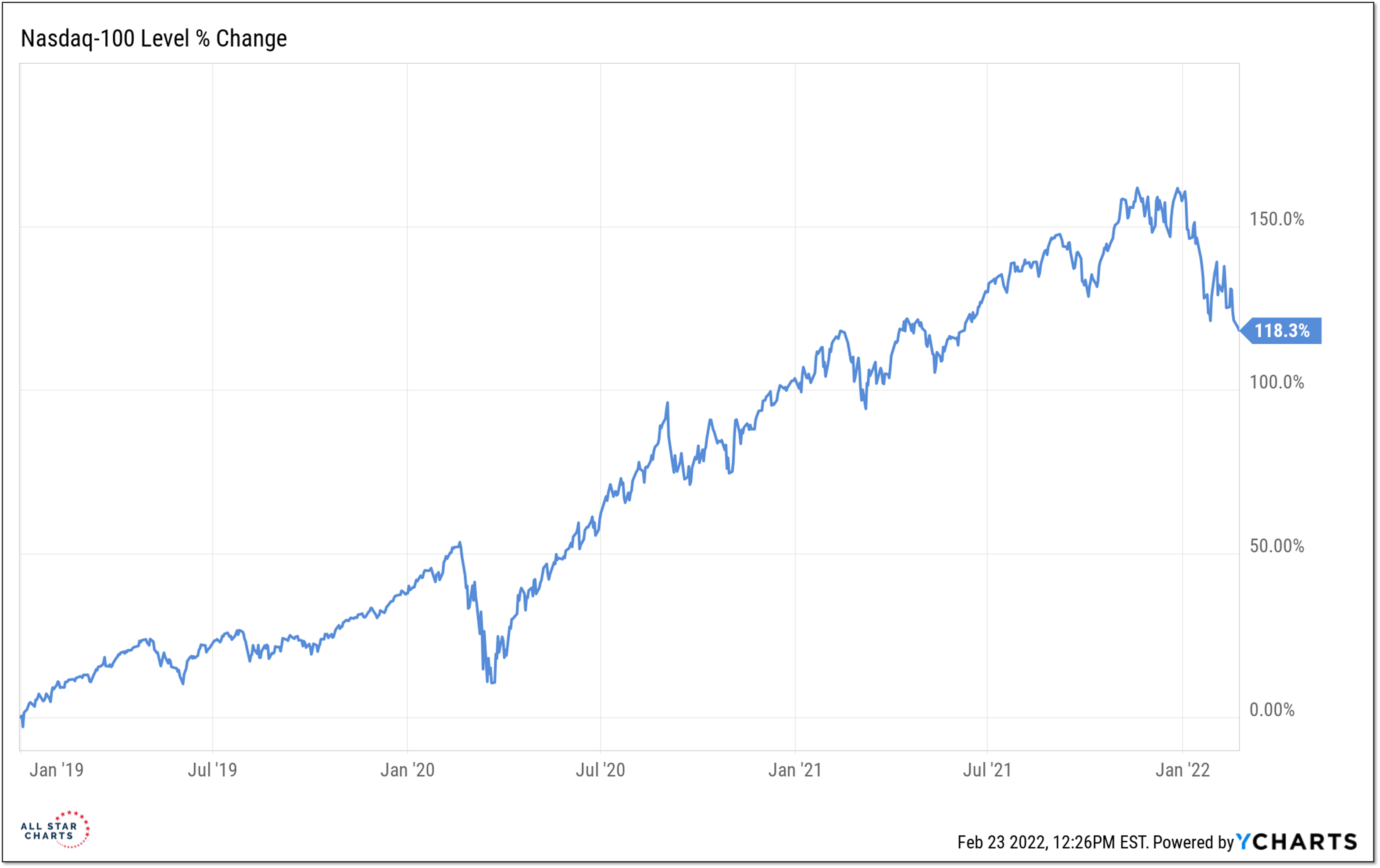 The NASDAQ is getting plenty of attention for the carnage that is occurring beneath the surface. The stat that really sticks out for me is that 95% of the trading days over the past three months have seen more new lows than new highs. That weakness is now hitting the index and while the NASDAQ 100 is making new YTD lows it’s still more than twice as high as it was at the start of 2019. So while we are seeing evidence of fear and pessimism in the sentiment data, the question I wrestle with from a price perspective is whether we have unwound or are still unwinding. If it’s the former, we should soon find support and start seeing more new highs than new lows. If it’s the latter (which is the direction I am leaning), then there is room for pessimism to continue to rise and the NASDAQ 100 could soon be in the red on a year-over-year basis.

END_OF_DOCUMENT_TOKEN_TO_BE_REPLACED

Key Takeaway: Speculative excesses have been unwinding for a year and that has taken its toll on investor sentiment. The overall mood is characterized by a lack of optimism rather than rampant pessimism. This is consistent with the grind lower in many areas of the market since new highs peaked in February 2021. The damage done beneath the surface has only in recent months impacted the indexes, but if that impact intensifies a further expansion in pessimism would not be surprising. Benchmark 60/40 portfolios have gotten off to their worst start in a quarter century and our strategic positioning indicators continue to point to a high risk backdrop. If there isn’t much of a reward at the end of the volatility rollercoaster, passive participants may start to actively question whether the ride was worth it. 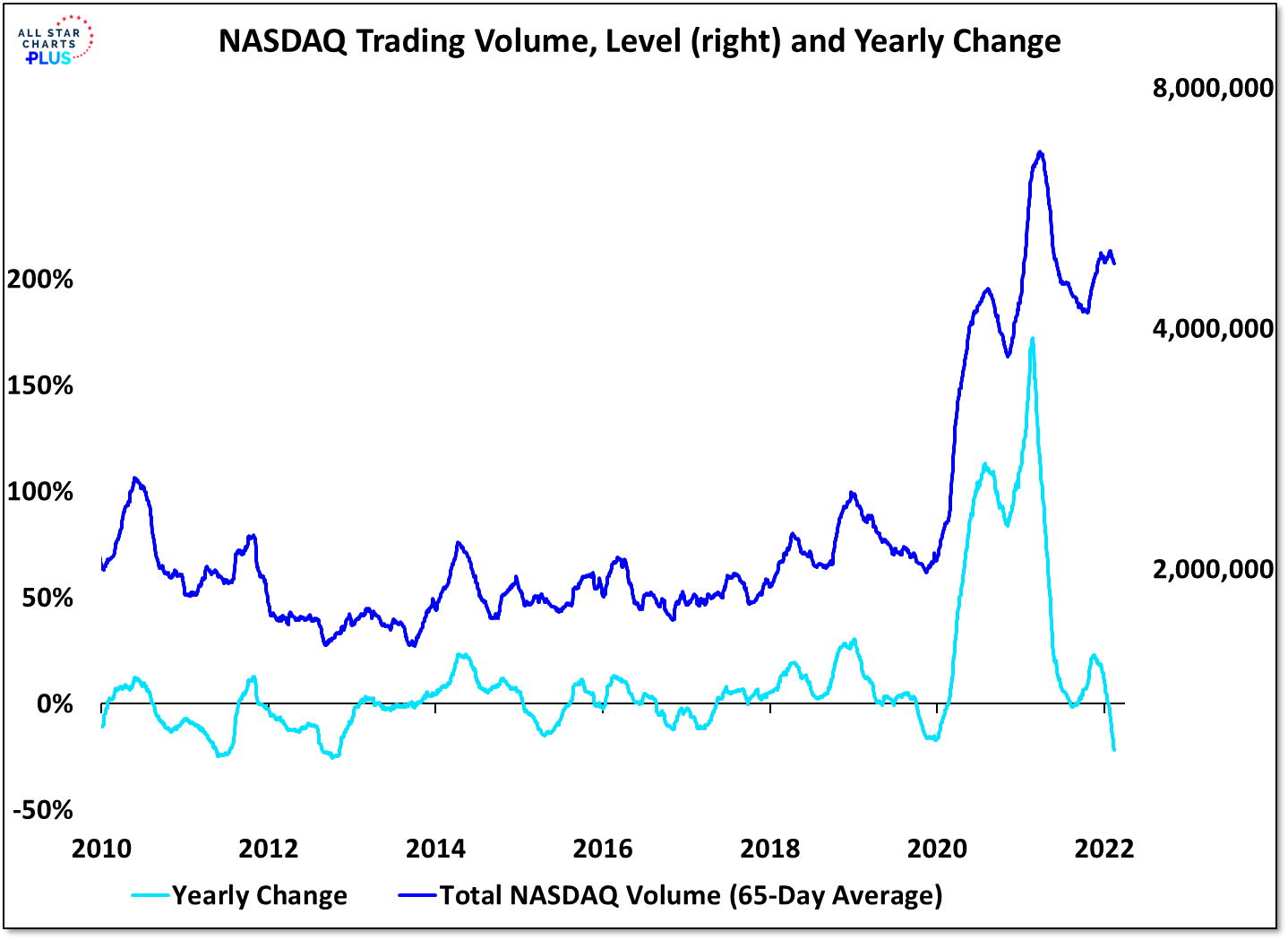 While the popular averages peaked more recently, there is plenty of evidence to suggest we are now a year into an unwind in speculative activity. This time last year, more than a quarter of the issues on the NYSE+NASDAQ were hitting new highs (the peak for the cycle) and NASDAQ trading volume was 150% higher than it had been the year prior. Fast forward to this year and we see half of the stocks on the NYSE and three-quarters of the stocks on the NASDAQ are down 20% or more from their highs (nearly half of the stocks on the NASDAQ have been cut in half). NASDAQ trading volume is 20% (and falling) lower than it was a year ago. Sentiment is sour and the risk appetite unwind continues. The question isn’t whether US stocks are going to enter a new bear market, but when they will emerge from the one that many find themselves in already.

END_OF_DOCUMENT_TOKEN_TO_BE_REPLACED

Key Takeaway: Sentiment has unwound to a point that it’s now seen as an opportunity rather than a risk. Pessimism runs high, investors are cranky, and we have had the most bears since 2016. On top of that, our universe of risk-on/risk-off ratios continues to lean toward the risk-off side of the scale. There are signs of budding pessimism (Consensus bulls have risen for the second week in a row and the NAAIM exposure index fails to register excessive pessimism) after the recent bounce in the major equity indexes. But without a strong enough reaction to produce meaningful breadth thrusts it’s difficult to be bullish on the broader market.

Sometimes the best approach is to set aside movements in individual indicators and look at an aggregate. Our Sentiment Composite has moved from being a market headwind in early 2021 to a tailwind now in 2022. After pessimism reaches an extreme, expanding optimism is bullish for stocks. At this point we want to see improved price action, renewed confidence from investors and sustained buying pressure.

END_OF_DOCUMENT_TOKEN_TO_BE_REPLACED

Key Takeaway:  Investor sentiment looks washed out – at least for now. Investor sentiment was a headwind early in 2021 but more recently had been a neutral market influence from our weight of the evidence perspective. Now, with the indicators pointing toward fear and pessimism and equity inflows sputtering to start 2022, it looks like sentiment now is a tailwind for equities. How long that persists remains to be seen. Seeing pessimism and fear remaining elevated even as if stocks stop going down could help sow the seeds for an unloved rally. Longer-term, there remain imbalances from a valuation and asset allocation perspective that remain unresolved. 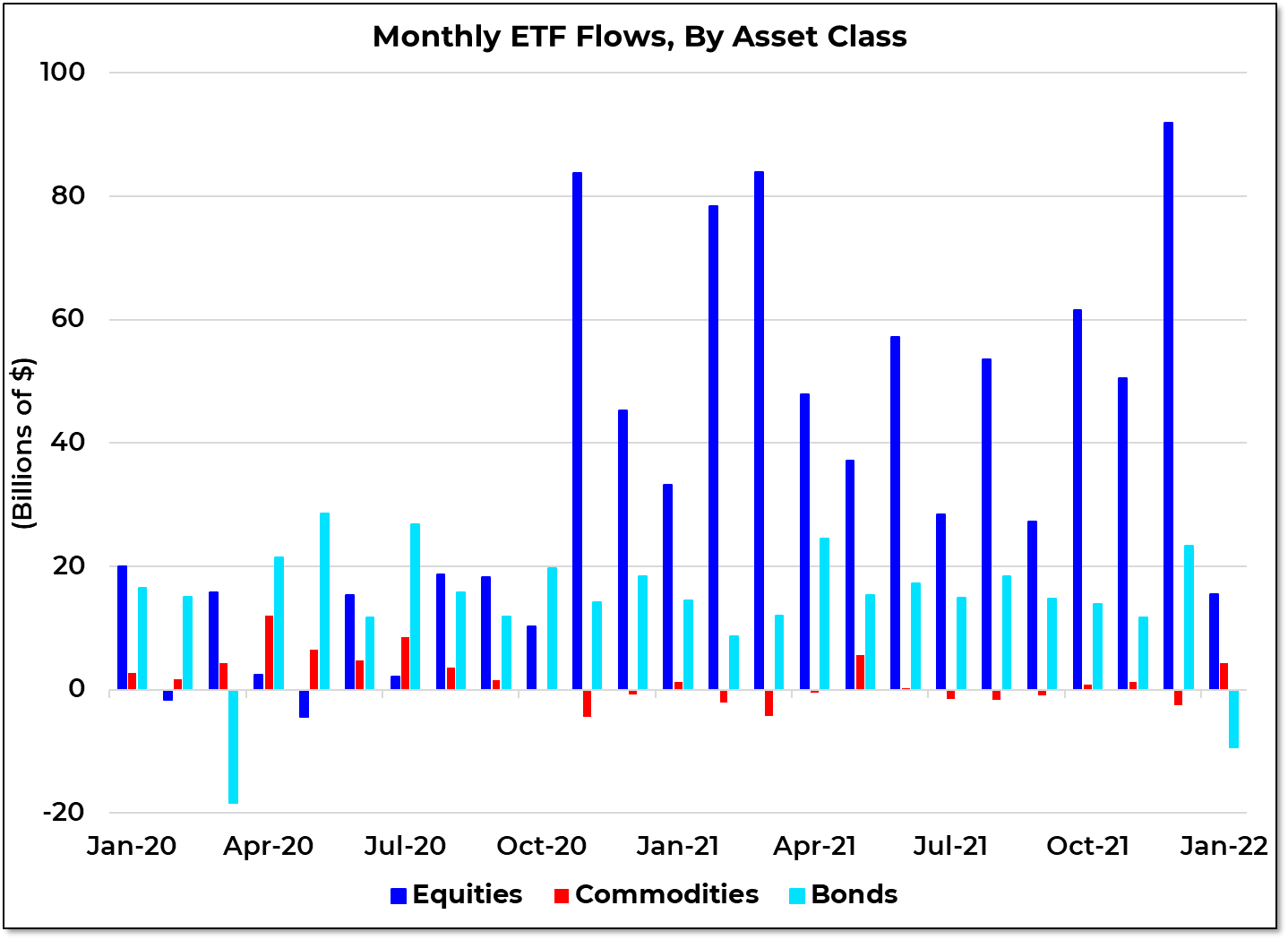 Equity ETFs saw their 20th consecutive month of inflows in January, but last month’s inflows were the smallest since October 2020 and a sharp slowdown from a record-setting December (from $90B to $15B). January tends to be one of the weaker months when it comes to inflows, so whether this is a breather or the beginning of a new trend remains to be seen. Elsewhere, bond funds had their first month of outflows since March 2020 while commodity funds (which experienced net outflows for 2021 as a whole) had their largest inflows since May.

END_OF_DOCUMENT_TOKEN_TO_BE_REPLACED

Key Takeaway: US stocks are on the ropes after taking a series of heavy hits in recent weeks. This comes against a backdrop of rising volatility and fear, fueling an increase in pessimism. A complete unwind from speculative extremes is underway as a market that once bent under pressure is now beginning to snap. The silver lining is that there are still pockets of strength among cyclical/value sectors, like energy. The question is whether or not this can remain the case in the face of widespread pessimism.

Sentiment Report Chart of the Week: Leadership Rotation Gets Energetic 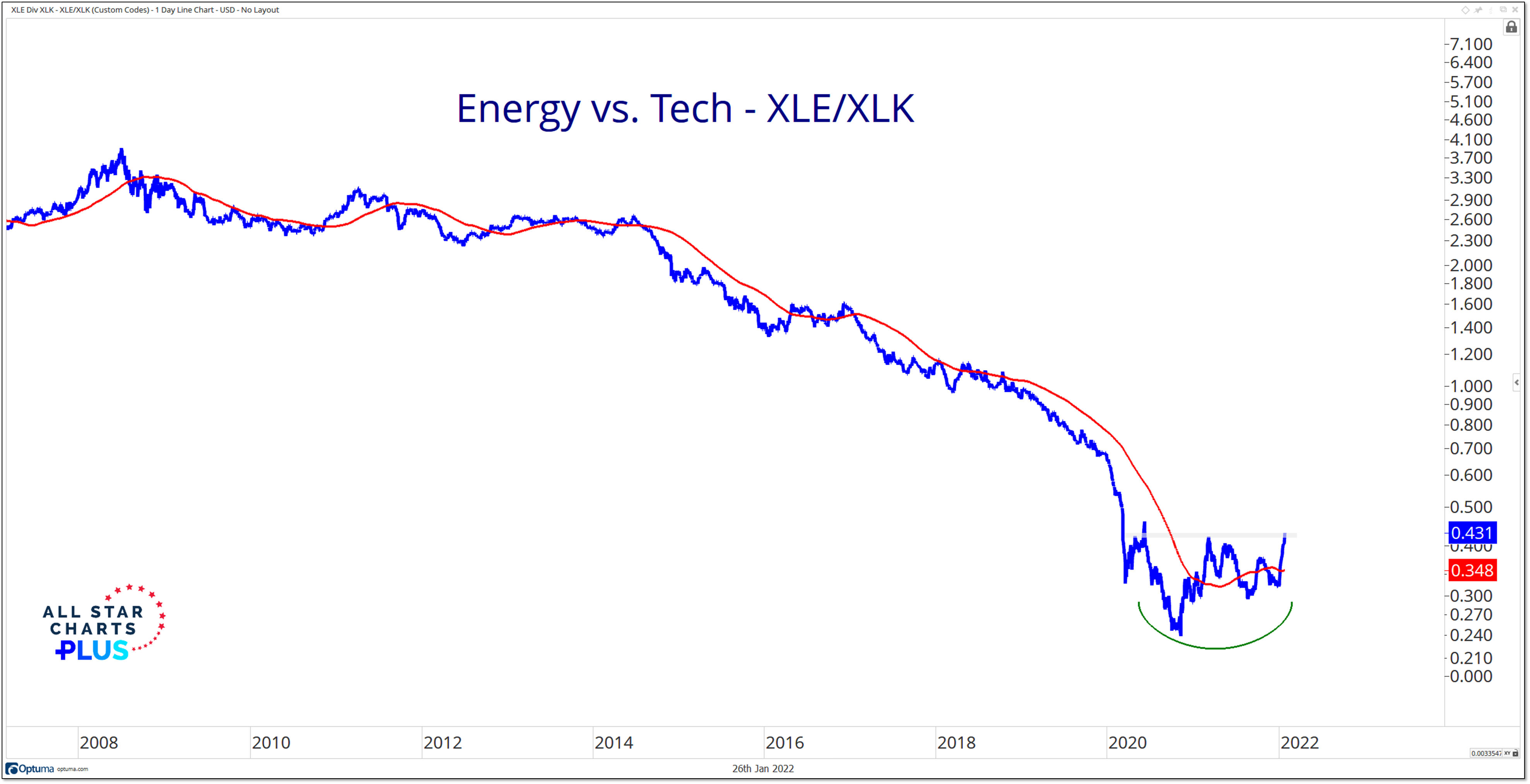 The energy sector is picking up steam despite the recent selling pressure among US stocks. The sector is having a great month to start the year (+17%) and this week saw one of the largest 1-day return spreads between XLE and XLK on record (22nd overall). In fact, seven of the top 25 events have come since the COVID-related market lows. After taking a backseat to tech for more than a decade, energy led the market last year and is on track to do the same in 2022.