Next week I will be out of the office from Monday through Wednesday as I will be traveling for business in New York City and Baltimore. If you are in the New York City area on Tuesday afternoon, come join me at the Marriott Marquis for a discussion on how to use Technical Analysis to approach the Global Marketplace.

On Friday I updated all of the U.S. Sectors & Sub-sectors, Commodities and Currencies on both weekly and daily timeframes in the Chartbook. I took some notes along the way and wanted to share them with you guys. Here are a few things that stood out: END_OF_DOCUMENT_TOKEN_TO_BE_REPLACED

END_OF_DOCUMENT_TOKEN_TO_BE_REPLACED

Commodities and Currencies are telling an interesting story. When you go through each of them one by one, you start to recognize ongoing themes, whether in energy, metals or agriculture. In addition, based on specific strength and weakness in different currencies around the globe, that information can be used in multiple ways. Using intermarket analysis, we can take that information and use it in the equities market, or go ahead and trade the commodities and currencies directly using Futures, Forex or ETFs. Either way, it’s worth doing the homework.

I just finished my Commodities and Currencies review and updated all of them in the Chartbook. It’s nice to see Oil and Copper rallying as we discussed in the most recent letter. I think this theme continues END_OF_DOCUMENT_TOKEN_TO_BE_REPLACED

On Tuesday I got a nice email from technician Mark Newton, CMT over at Greywolf Execution Partners. He put out a list of what’s changed technically in the past 24 hours. I thought this was interesting and wanted to pass it along:

A few things that have changed in the past 24 hours:

2)      10, 30 YR Yields showing signs of rolling back over after minor bounce from early February  (GIVEN THE + CORRELATION WITH STOCKS, this could prove important)

4)      Emerging markets starting to resume recent weakness – EEM has broken BACK down to new lows in relative terms to SPX, and signs of EM currencies starting to peak – TRY, RUB

5)      Retailing continuing to bounce after its severe 3 month pullback, which is helping Consumer Discretionary start to turn back higher after its January underperformance – Stocks like GPS, BBY, TIF attractive in the short run

6)      Energy continues to be an area that’s a good risk/reward long sector-wise, having recently bottomed and turning higher, despite ENERGY COMMODITIES backing off a bit- CL, NG, etc

7)      Consumer Staples showing signs of pushing higher and relatively outperforming today after a lengthy few month RELATIVE downtrend vs SPX-  stocks like RAI, STZ and the grocers all pushing higher-  Still might be tough to call any type of change in trend in staples back to positive just yet, but these stocks hitting new highs remain the ones to favor/overweight

9)      Uranium stocks the newest low priced group to begin a large momentum based move, echoing what’s been seen in Marijuana stocks of late, and the number of small priced stocks beginning to emerge from bases-  some companies with little or no earnings, while Social media stocks and other highflyers hit new highs, drawing interest is a cautionary sign

The Yen is always an interesting topic of conversation. For so long we’ve grown accustomed to higher prices, specifically against the US Dollar. But we could be in the beginning stages of a secular shift in money flow.

Let’s first look at the chart of $USDJPY showing the declining value of US Dollars relative to the Yen over the past five years. This trend obviously goes back a lot further, but this is the most recent decline (advance in Yen): 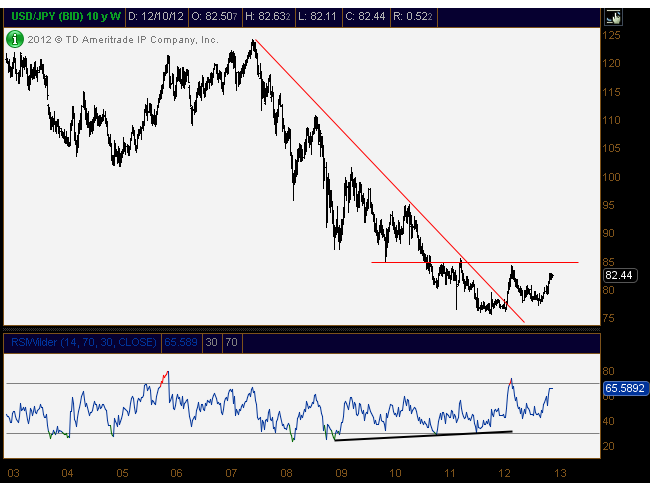 Right off the bat, we can see the downtrend from the 2007 highs is now broken. During last year’s fresh lows in dollar/yen, our momentum indicators were already putting in a series of higher lows. This bullish divergence in RSI is the seconds bullish characteristic we see here. Next, we are seeing overbought readings in RSI with support near 40; more signs of a bull trend. The last thing we want to see is a breakout near the 85 level showing that not only do we have higher lows in price, but now we’d also have higher highs. This is our definition of an uptrend.

My pal Ron William was on Bloomberg TV this morning and did a nice job of incorporating intermarket analysis into this conversation. The founder of RW Market Advisory and fellow Chartered Market Technician not only brings up the $USDJPY chart, but also looks at the Yen relative to the Euro and Gold. In his opinion, all of these signal that a change in trend could be upon us: