Commodities and Currencies are telling an interesting story. When you go through each of them one by one, you start to recognize ongoing themes, whether in energy, metals or agriculture. In addition, based on specific strength and weakness in different currencies around the globe, that information can be used in multiple ways. Using intermarket analysis, we can take that information and use it in the equities market, or go ahead and trade the commodities and currencies directly using Futures, Forex or ETFs. Either way, it’s worth doing the homework.

I just finished my Commodities and Currencies review and updated all of them in the Chartbook. It’s nice to see Oil and Copper rallying as we discussed in the most recent letter. I think this theme continues and helps emerging markets stabilize. Here are the rest of my notes:

To read the full note, you must be a premium member of All Star Charts. Please login below or start your risk-free 30 day trial today.

The levels in Copper remain the same – we only want to be long if prices are above 2.03, which represents the 161.8% Fibonacci extension of the August-September rally.

Similarly Crude Oil continued to rip this week. We only wanted to be long Crude Oil if prices were above 29.60 and so far this is working well. This was based on the 161.8% Fibonacci extension of the August-October rally. I would be taking profits near the downtrend line from the highs last year, currently near 40 (but note that it’s falling).

The rally in Natural Gas since last month has continued nicely. There was a text book failed breakdown in December below the 2012 lows and that became the catalyst to really get this commodity going. I would continue to be buying on pull backs and look to be taking profits near 2.55, which had been support throughout last year.

In agriculture, most of these names continue to be a mess. Although there are some decent risk vs reward opportunities, for the most part, I would just stay away. Cocoa, on the other hand, has been one that we’ve wanted to be selling aggressively towards 3400. This was former resistance in 2014, but more importantly a failed breakout above the downtrend line from the 2011 highs. This failed breakout became the catalyst to send prices tumbling under 3000 breaking the uptrend line from the early 2013 lows. We want to be covering shorts under 2700 and selling into any strength above 3000.

Lumber has been a great short since breaking the uptrend line from the September lows. We had a target near 233 which was support in the Spring last year and where the most recent rally really picked up steam in late September. There is a lot of market memory here and our downside target was hit this week where we wanted to be covering short positions. I would no longer be short Lumber, but would prefer selling into strength towards 255-260 going forward.

In currency land, we got the Yen sell-off this week that we discussed in the most recent market letter. Our reasoning was because money would be coming out Yen as it went back into risk assets like stocks and beaten up commodities like Crude Oil and Copper. As usual, the media likes to come up with clever reasons for big moves, and I’m told this time around it was because of the Bank of Japan. We don’t care about that stuff and expected this sell-off well in advance of any BOJ meetings. Price leads, news follows. We’ll chalk this one up as another great example.

I like the currency crosses vs Yen better than vs the U.S. Dollar. Euro and British Pound are two good examples. I like both of these on the long side vs Yen much more than I do vs U.S. Dollars. The Dollar continues to remain strong, and if the denominator of your fraction is strong, it will decrease the value. As Yen falls, I like Euro and Pounds against it. The risk management levels are very well-defined in the Chartbook.

On the long side of the U.S. Dollar, I like it best against Swiss Francs. The line in the sand is very well-defined as we only want to own it if we’re above the highs from last March. I don’t love the U.S. Dollar Index itself because of it’s very large exposure to Euro, which I happen to like on the long side right now. I would much rather own Dollars vs Swissy.

Finally, I want to note that there is a really interesting development taking place in Crude Oil vs Energy Stocks. Although this is not a chart in the Chartbook (should it be?), it is one that I look at often, especially in this environment. I am currently seeing what could be a failed breakout in Energy stocks vs the commodity itself. This with bearish divergences on multiple timeframes suggests that Crude Oil should dramatically outperform the Energy stocks going forward. Here we are looking at the S&P500 Energy Sector Index vs Crude Oil. First the Weekly and then the daily chart: 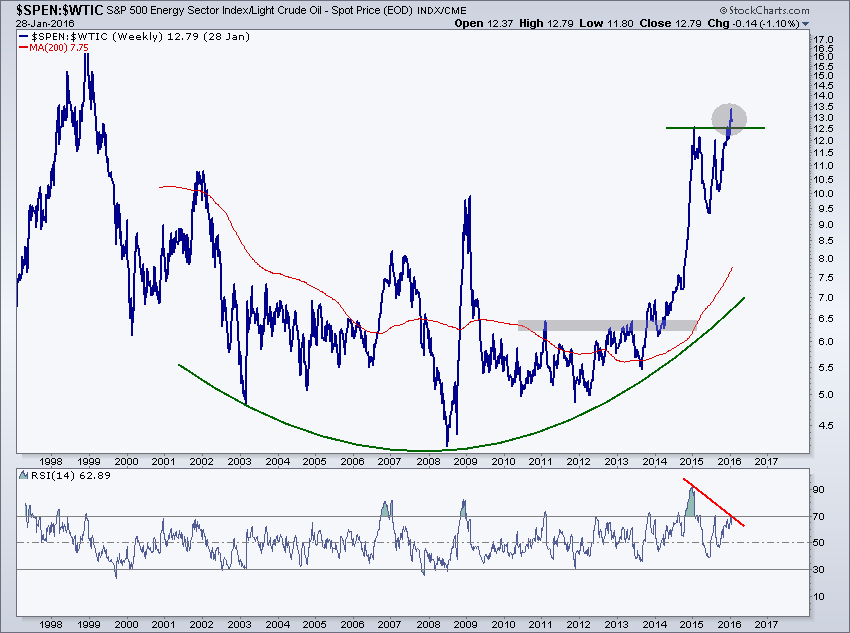 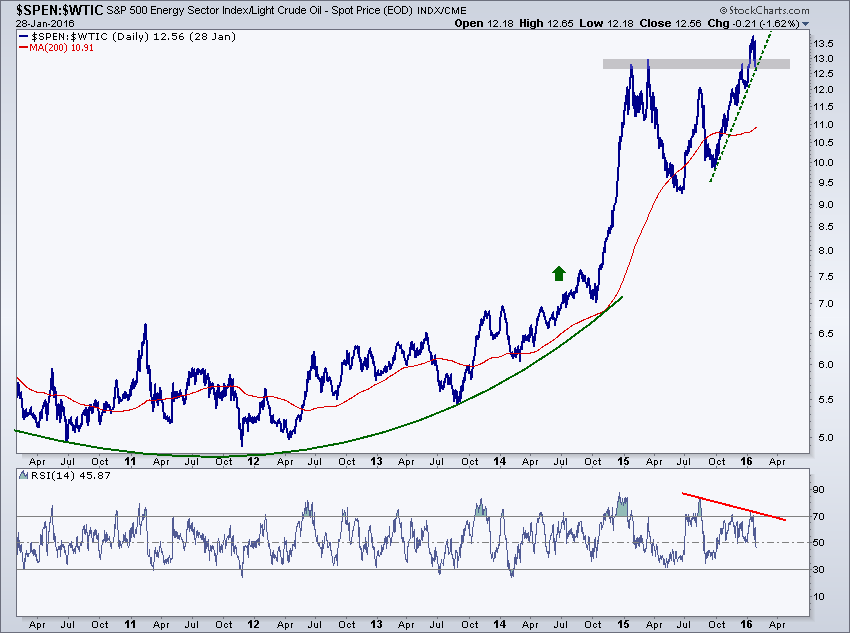 Interesting right? I think it’s worth watching. From an execution standpoint, I would only be short this spread if we are below the January highs from last year.