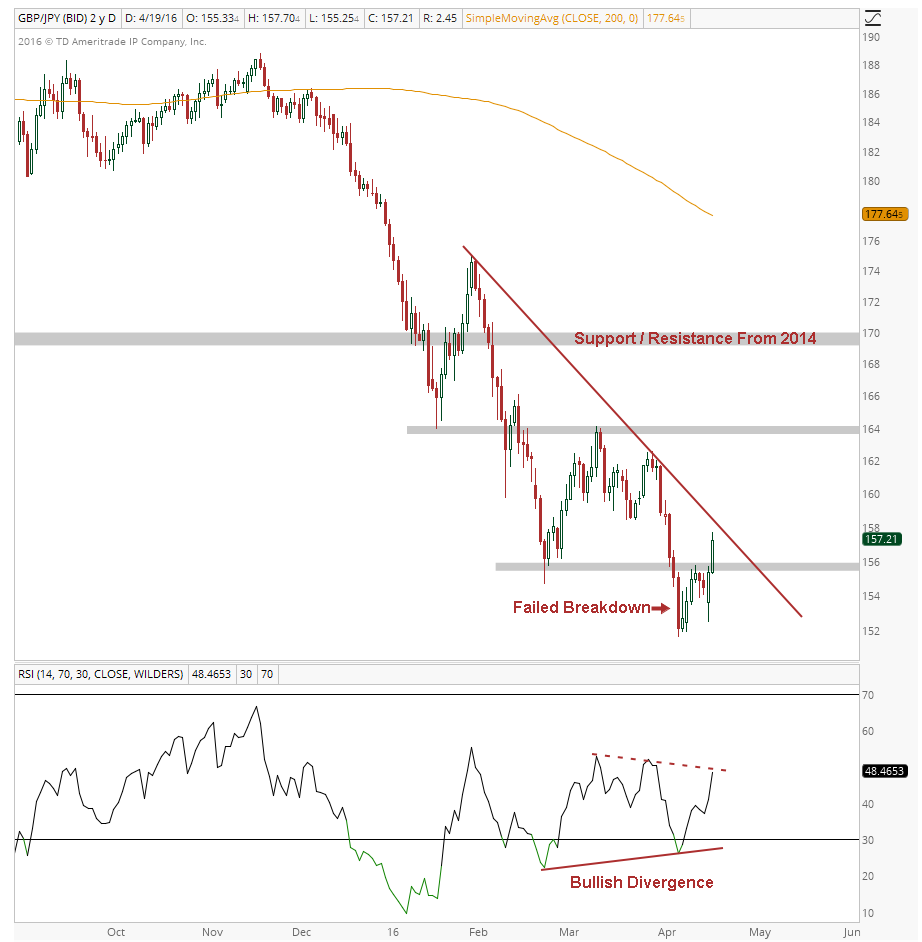 With prices currently 13% below their 200 day moving average, the potential for mean reversion offers a favorable risk/reward and the failed breakdown provides an entry where the risk is well-defined. Our upside price targets for this market are outlined in gray near prior support at 164 and the 2014 lows near 169-170.

We’re seeing similar action in Euro / Yen which briefly traded below the February lows and quickly reclaimed support to confirm the bullish momentum divergence and failed breakdown. This provides an entry on the long side where the risk is well-defined. 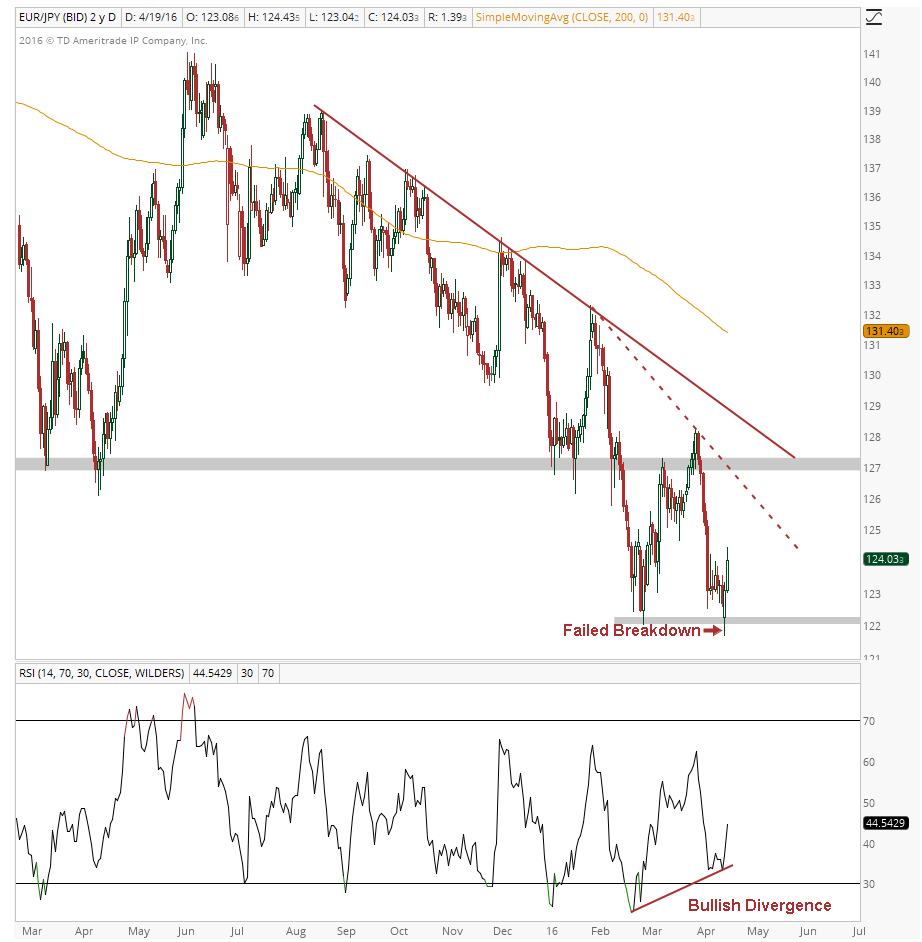 We can be buyers of this market as long as prices remain above February lows on a daily closing basis with a primary price objective at its accelerated downtrend line and former support near 127. If price action continues to improve at that point, this pair may see further upside toward toward the downtrend line from the August highs at 128-128.50.

The last pair where these particular conditions exist is Swiss Franc / Yen, except the February lows also correspond with the 2014 lows which adds to the significance of this support level. Prices briefly traded below the February and March lows, but quickly reclaimed them to confirm the bullish momentum divergence and failed breakdown. 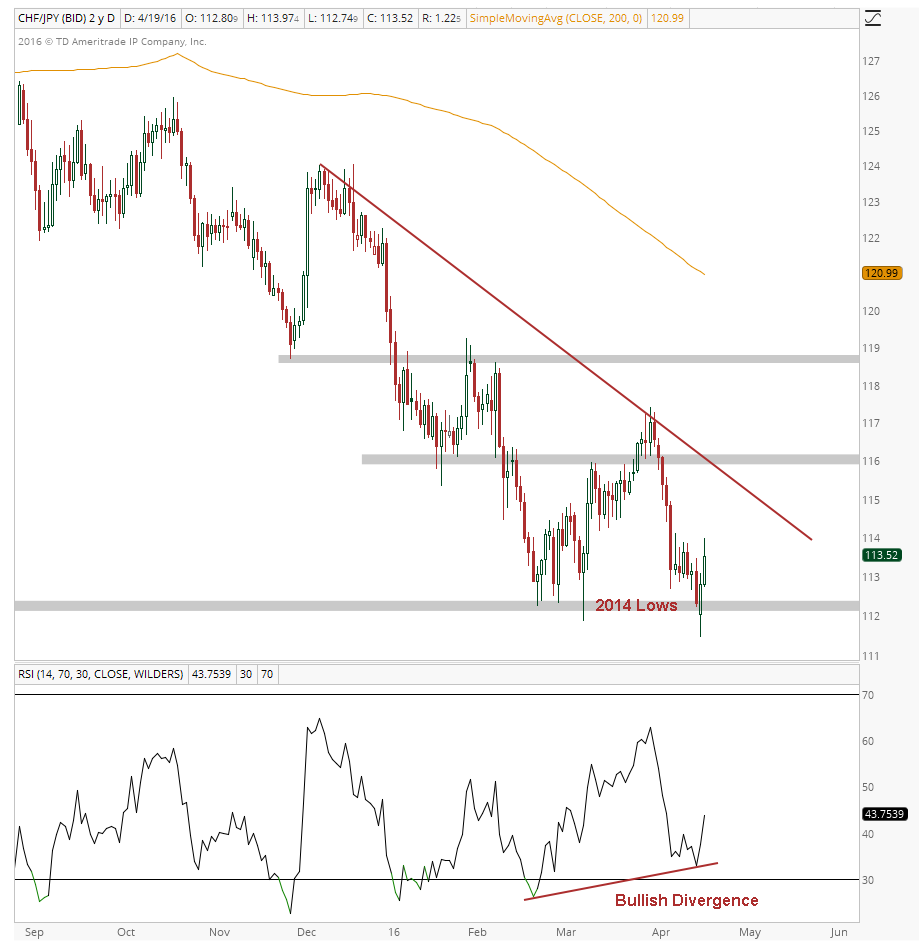 As long as prices remain above the March lows of 111.89 on a daily closing basis, the bias remains to the upside. Our price targets for this pair are at former support and the downtrend line from the December highs near 116 and former support/resistance near 118.75.

The Bottom Line: All of these pairs remain in long-term downtrends, but tactically the risk/reward is skewed in favor of the bulls as long as they remain above their respective support levels. We’re seeing a number of major currencies appreciating relative to the Yen over the short-term, but these are the pairs where the risk is well-defined and the risk/reward is skewed heavily in our favor. For now these are counter-trend trades, but we’ll keep an eye on them as they develop to see if the resulting action has any important structural implications.

JC Here – I think this is a really interesting theme that Bruni is pointing out. The risk vs reward profiles in each of these yen crosses are very clear, which we love to see. But in addition to the forex price changes, I think the implications for risk appetite globally also come into question here. If we do indeed get mean reversions in these 3 crosses against the Japanese Yen: Pound, Euro and Swissy, that would suggest Yen prices are falling. This is generally a positive environment for stocks, particularly U.S. and Japanese equities. So even if you’re not an active forex trader, this is still a theme that I think is worth watching, even if it’s just from risk management perspective.

For regular updates on these charts above, as well as the key levels we are watching to get short the U.S. Stock Market, Sectors, and individual stocks, Click Here to join us in a more official capacity.