Last week’s mystery chart was a popular one, so we inverted it to make things a bit more challenging. Someone still guessed it… Nice work.

It was the iShares 7-10 Year Treasury Bond ETF $IEF. The issue with inverting Bond charts is that when you do they look identical to yields. In the case of IEF, we’re basically dealing with the US 10-Year Yield $TNX.

Rising rates has been one of the main themes early this year as developed market yields have accelerated higher and hit the pockets of bond investors all over the world.

In this post, we’ll check in on some of the most important and most telling credit instruments on both absolute and relative terms in order to piece together the message the bond market is sending investors.

Read our post from last month for our take on what cross-asset ratios outside of the Bond Market are indicating. Many of these trends have confirmed their reversals and accelerated to the upside over the past month as investors continue to price in higher rates in the future.

Here’s last week’s Mystery Chart. Now that it’s right side up, instead of rallying into resistance, we’re seeing prices collapse into potential support.

Momentum hitting oversold supports the validity of the recent move and suggests further weakness is likely over the intermediate-term. Most of you were betting on a breakdown through these former highs. Based on the weight of the evidence, we also think that is the higher probability outcome.

Let’s check in on some of the laggards in our Fixed Income universe now. This is Emerging Markets Debt in Local Currency $ELD.

If ELD violates its 2016 and 2018 lows just beneath 32, things are likely to get dicey and we’d be looking for a retest of the all-time lows from last year.

Notice that ELD is in a strong structural downtrend. If we’re below this resistance level, we have no reason to believe the trend doesn’t continue on in that direction.

Just like anywhere else we look these days, the outperformers in Fixed Income are the most risk-on assets of the group such as TIPS and Junk Bonds.

Momentum is waning after being unable to hit overbought on a weekly basis, even despite the aggressive rally off last year’s lows.

While JNK and TIP have each had a nice run, they’re currently vulnerable as they test critical levels of interest on an absolute basis.

Although, it’s not so much the absolute trends that we’re focusing on right now… Here’s why.

The Vanguard Total Bond Market ETF $BND below does a nice job of illustrating the potential for the overall asset class to crack and collapse lower from here. Similar to the charts above, BND is also on the cusp of violating key former highs.

We have a clear theme here. We already know the Bond Market is not where the alpha is right now, so we’re not looking to buy any of these charts. Frankly, we don’t care if TIPs and High Yield break down here or not.

It’s not the absolute trends that are important… Instead, it’s the relative trends that we’re monitoring closely… These ratios are just packed with intermarket information.

In this case, we’re looking at some of our favorite ratios for getting a read on interest rates, and on a relative basis the situation looks very different for these two groups.

Here is the High Yield $HYG vs Treasuries $IEF ratio with the US 10-Year Yield overlaid on top to show the strength of the relationship.

The ratio tends to peak and trough around the same time as yields throughout history. This makes it a useful confirming indicator for developments in the bond market…

With it recently reclaiming key former lows and breaking through a multi-year downtrend line, confirming the new highs in yields is exactly what it’s doing.

When this ratio is rising, Treasury yields are increasing at a faster rate than the yields investors are demanding in order to own higher-risk corporate debt instruments.

When we invert the relationships above and compare the yields instead of prices on these bonds, we get some very valuable data regarding risk appetite in the form of credit spreads. 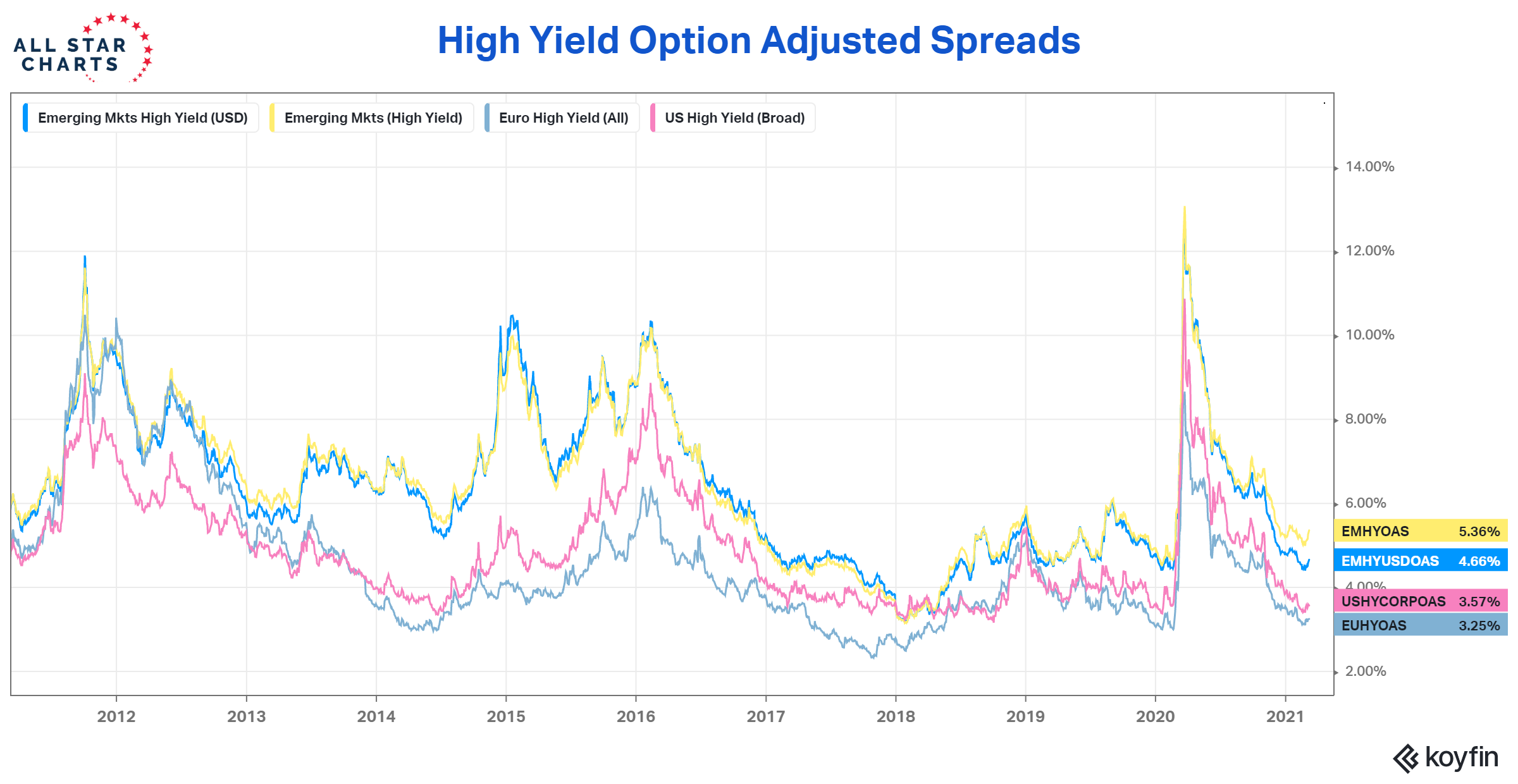 Credit spreads continue to make new lows across the board, which is supportive of the new highs we’re seeing from interest rates.

The last time we saw these high yield and corporate bond spreads compress so aggressively was back in 2016. That action carried over into 2017, and both were strong years for stocks and risk assets. If the market comes under pressure, we should see a notable uptick in these figures as we have in the past. Until this occurs, we’re likely to remain in a risk-on environment as long as they stay muted near current levels.

This next ratio is as good as any for getting a read on future inflation expectations. As such, it also tends to move in line with rates and acts as an excellent confirming indicator as well. This is TIPS vs Treasuries.

Just like the relative strength from High Yield, this relationship is suggesting the rally in rates could just be getting started as this breakout above a 15-year downtrend line sure has the looks of a structural trend reversal in favor of TIPS.

The fact we don’t hear too much about the yield curve anymore is a good thing. Financial news and media only like to cover it when it’s inverting, so whenever there is a prolonged silence on the topic you can presume it’s steepening, as it is today.

It’s much sexier to talk about the impending bear market and recession than the early innings of a new bull market, right?

When the curve is steepening it simply means that longer yields are moving up at a faster pace than short ones, and by extension, the prices of these longer-duration bonds are underperforming. This is a natural dynamic in rising rate environments.

Like high yield spreads, we can express this relationship through either price or rates. One way to analyze it is using a ratio of short vs long-duration Treasury ETFs such as IEF vs TLT, below.

As you can see, the relative trend just broke out above its key 2016 lows and is now back above its pre-COVID levels. This supports the very similar price behavior from the US 10-year recently, as it also just reclaimed its 2016 lows.

One of the simplest methods to weigh the evidence about a theme is to simply look at how it’s playing out around the globe.

In the case of rising interest rates, the world is weighing in with a unanimous yes as developed market yields have all accelerated to the upside in tandem since late last year. 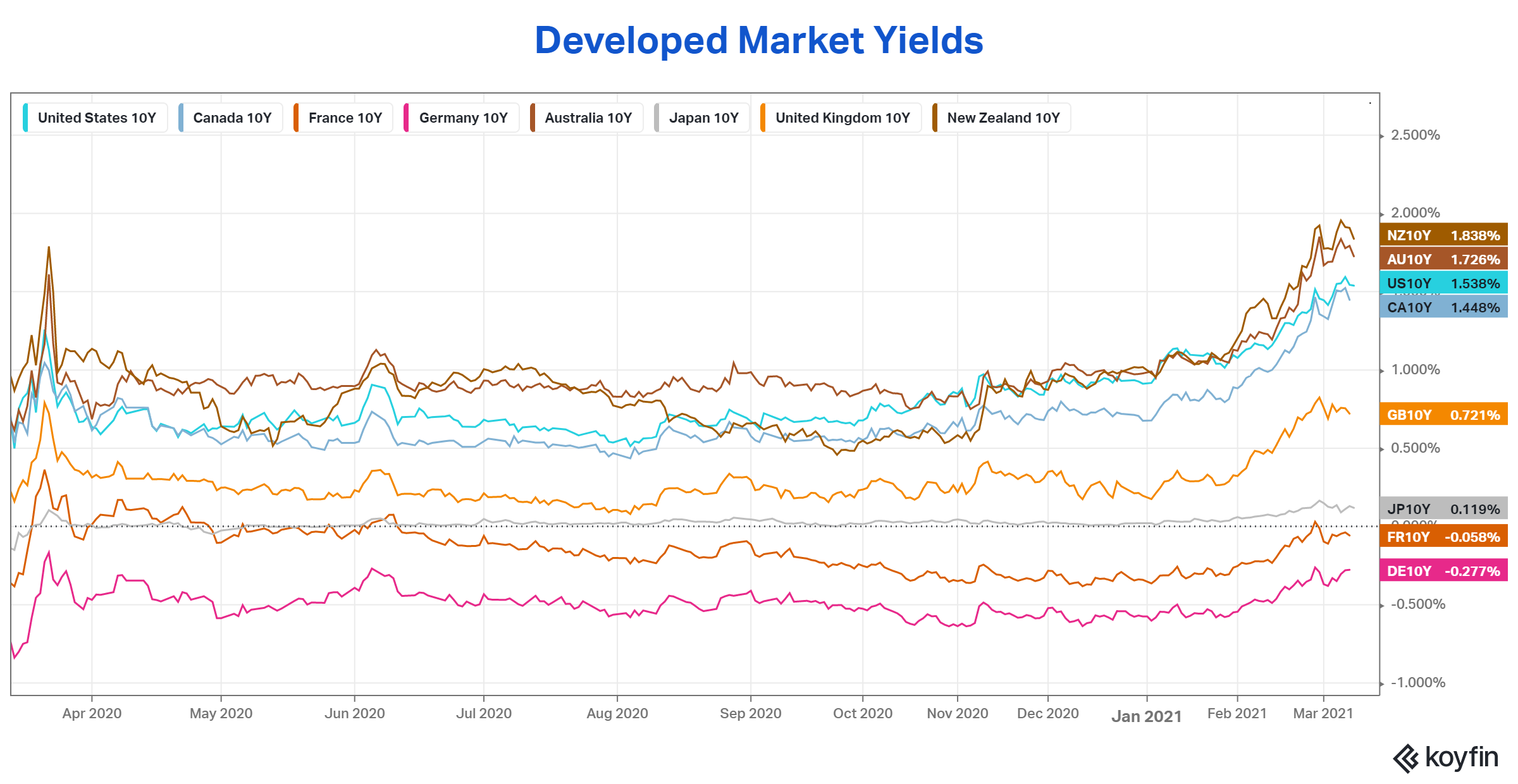 So just to be very clear, this rising rate environment is not at all isolated to the US or bifurcated by region, economic exposures, or anything else. This is a broad-based theme and is impacting international markets far and wide.

This certainly jives with the global growth and reflation trends we’ve become so used to talking about.

So, what’s the takeaway from all this?

Whether it’s the risk-on price action in currencies, the resurgences from commodities, or the rotation taking place in equities, there is a laundry list of evidence in all asset classes all over the world telling us this 100 basis-point rally in yields since Q3 is the real deal.

As if this isn’t enough, add all the points we just covered within the Bond Market. More or less all the signals are green for rates right now. This resounding corroboration of data is a bullish development for global risk assets and suggests that yields don’t just stay up, but continue to go up from here.

And it’s definitely not just a United States story. There’s been a synchronized rally in global interest rates since this time last year, and it’s become significantly more pronounced of late.

Now that the whole world is seemingly buying into the global growth and reflation theme… are you?