As homo sapiens we’re hard wired to feel the need to gossip. This goes back hundreds of thousands of years throughout evolution. We still see it today and through the speed of communication technology, that gossip gets amplified. While some would argue the issues of today’s society are unique, anyone who studies history knows that none of what we’re seeing today is new.

It’s our job as investors to be aware of this cognitive behavior flaw and work on avoiding the potentially disastrous implications of allowing our evolutionary gossip habits to enter into our portfolio decision making process. I’ve seen some amazing technicians and traders let their political opinions get in the way of their “process” and watched their horrible downfall. It’s been heart wrenching to watch, but the lessons learned by witnessing their collapse is something that will stay with me forever.

The current political and economic environment is unique in it’s own way, but they always are. Rather than focusing on the noise, I’ve found it extremely valuable to pay attention to the only thing that actually pays us: price.

I rip through 5000 charts a week, and most of the time even more than that. We’re talking U.S. Stocks and Sectors, European stocks, indexes and sectors, India, Southeast Asia and Latin America. I’m searching far and wide for signs of all of these troubles that I keep hearing about in the news outlets. I just don’t see it. To the contrary, I see healthy sector rotation, consistency in positive breadth and momentum, and an overwhelming amount of bullish signs relative to any bearish ones.

You guys know which stocks and sectors I like. That hasn’t changed at all in the past week. So rather than reiterate some of the more favorable risk vs reward opportunists I see out there, the Trade Ideas page is available for Premium Members here. Instead, today I want to focus on a few things I see out in the world that make me look at the glass half full, rather than half empty like so many people I see doing out there.

First, we have to look at credit. If the stock market is about to collapse, we’re going to see warning signals in credit. This is not the little tiny irrelevant crypto market. The credit markets are where the largest and most powerful financial institutions are allocating their money. This is the market that matters. Every crypto currency in the world can go to zero tomorrow and no one who matters will care. When there is turmoil, credit markets will reflect that. They are not at all right now.

While there are many ways to address credit, I think a couple of easy ways are by watching Junk Bonds vs both Investment Grade Bonds and US Treasury Bonds. The spread between the “riskier” bonds and the “safer” option tells us a lot about the risk appetite of investors in the largest market in the world. This is information we want to know. 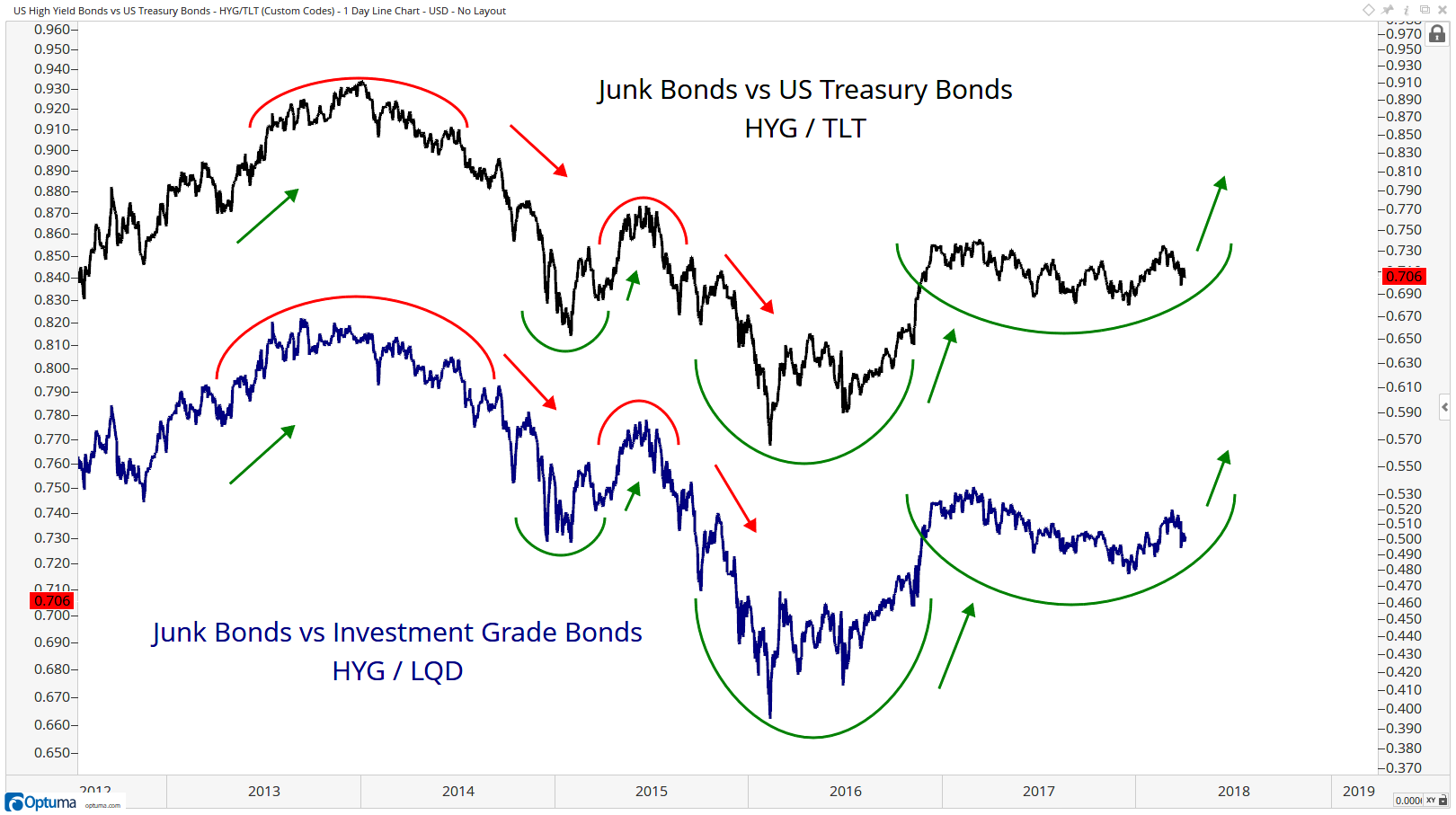 You can see in this chart that while the S&P500 and other major indexes around the world were making new highs into 2015, credit had already been showing signals of risk aversion. Notice the lower highs in 2015 well below the 2013-2014 highs. Also notice how both of these ratios bottomed out in early 2016, just as the major US stock indexes were putting in their bottoms. With credit spreads in this range the past year, we are not seeing any evidence of credit spreads widening. To the contrary, everything is calm, not suggesting any panic is in store. This is like turning around a cruise ship, it’s a process. We’re not even seeing the beginning of that process yet.

Historically, there is little long-term correlation between the S&P500 and Crude Oil prices. However, I think right now it’s something to watch. One of our major themes this year has been rotation into some of these emerging markets that have underperformed for so long. Many of these have high exposure to energy. I just don’t see a rally in Crude Oil up towards 80 to be consistent with a market environment where stocks are falling: 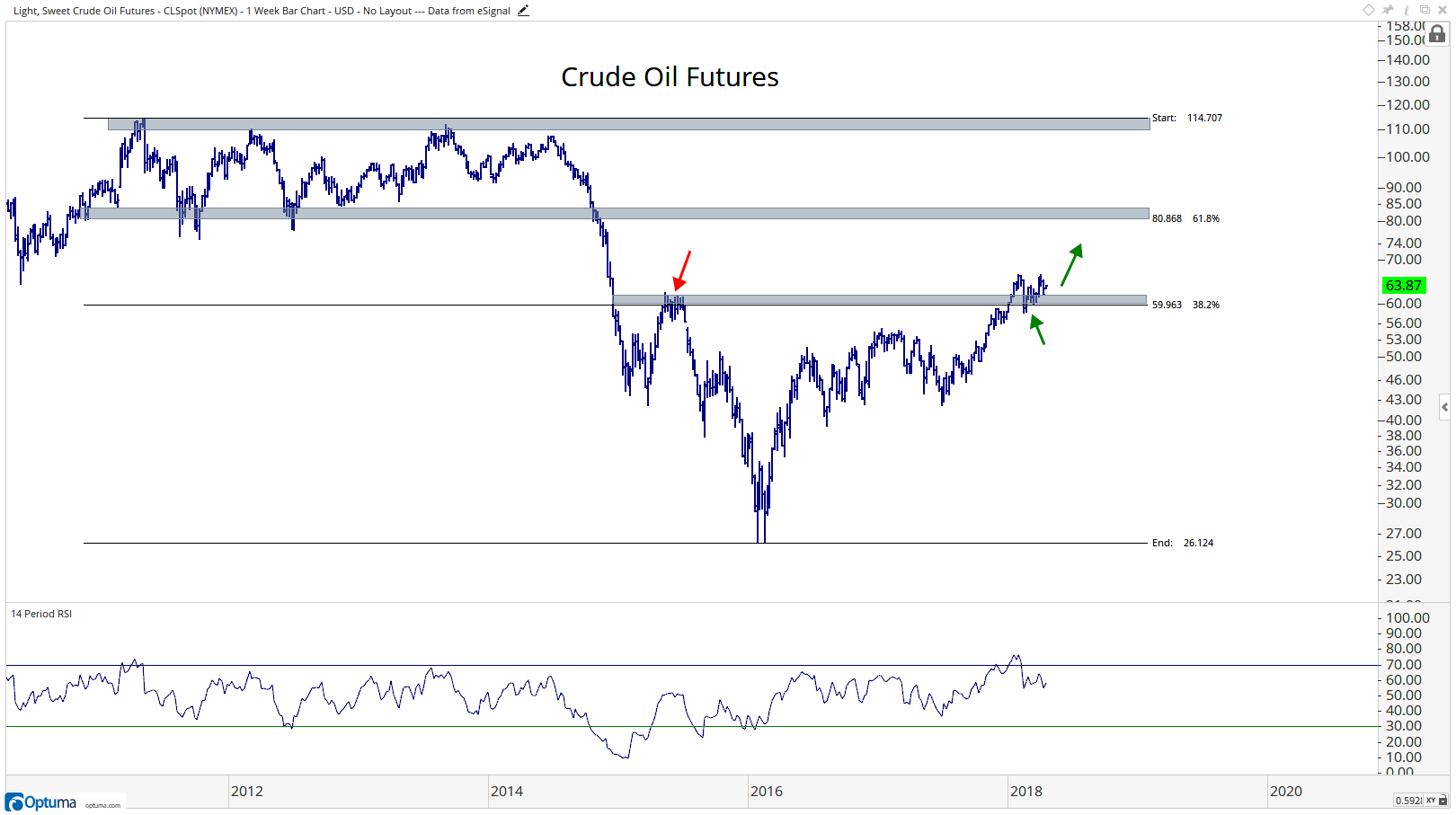 If we’re above 62, we’ve wanted to be long Crude Oil. But it’s the implications of higher crude oil prices, from a risk appetite perspective, that I think we should be focused on here.

This is a good example of that rotation into emerging markets that I’m talking about. These are the BRICKS nations equally-weighted vs the S&P500. So in other words, the biggest and most important emerging markets performance compared to US stocks. More specifically: Brazil, Russia, India, China, South Korea and South Africa. This looks like a historic bottom, not a top! 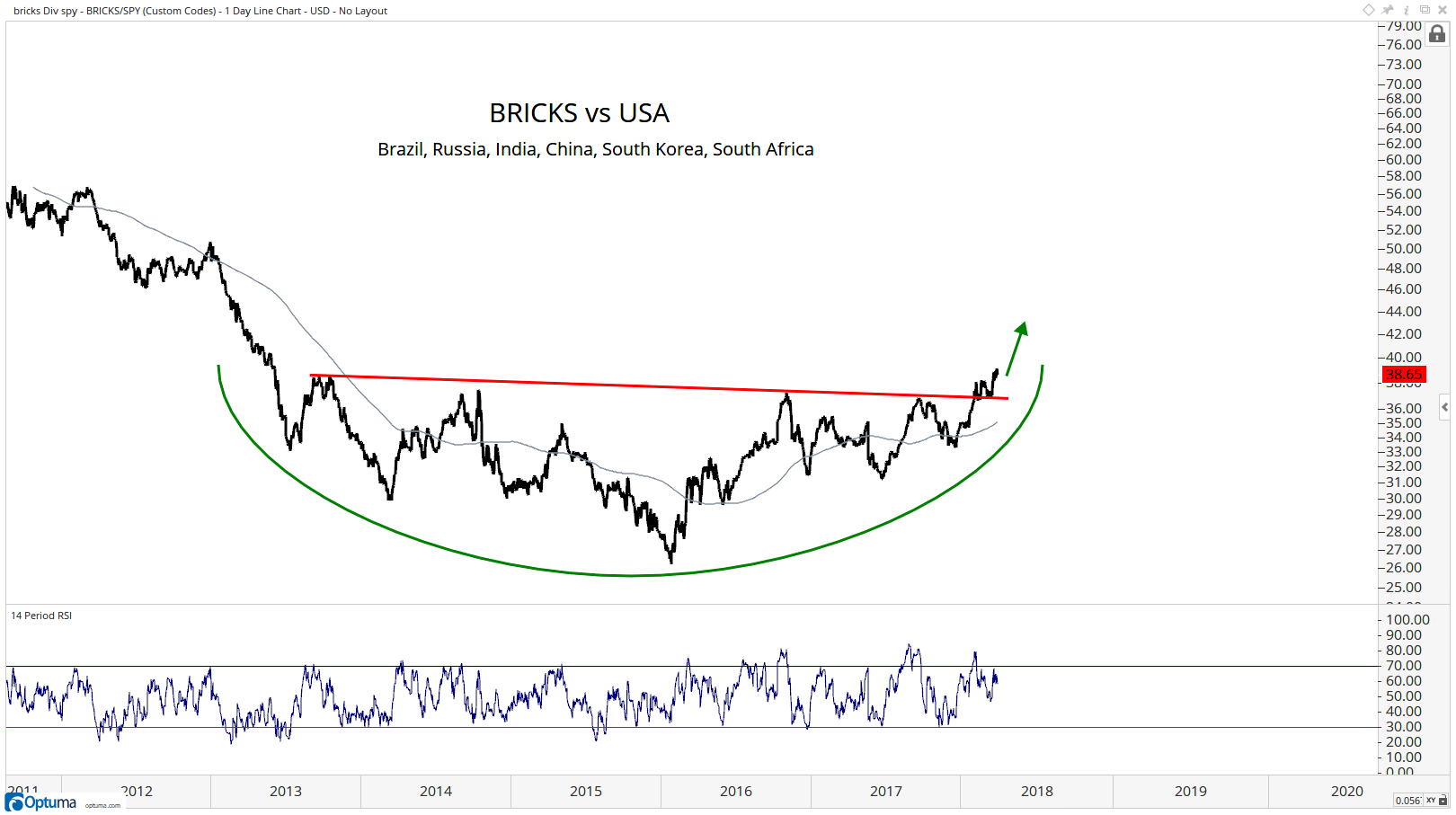 The internals of the market look strong. We are seeing characteristics of a strong ‘market of stocks’, not a weak one. As I’ve mentioned the past week, when the Dow Jones Industrial Average made new lows last month, fewer stocks showed bearish momentum characteristics. This is consistent within an environment where stocks are going higher. 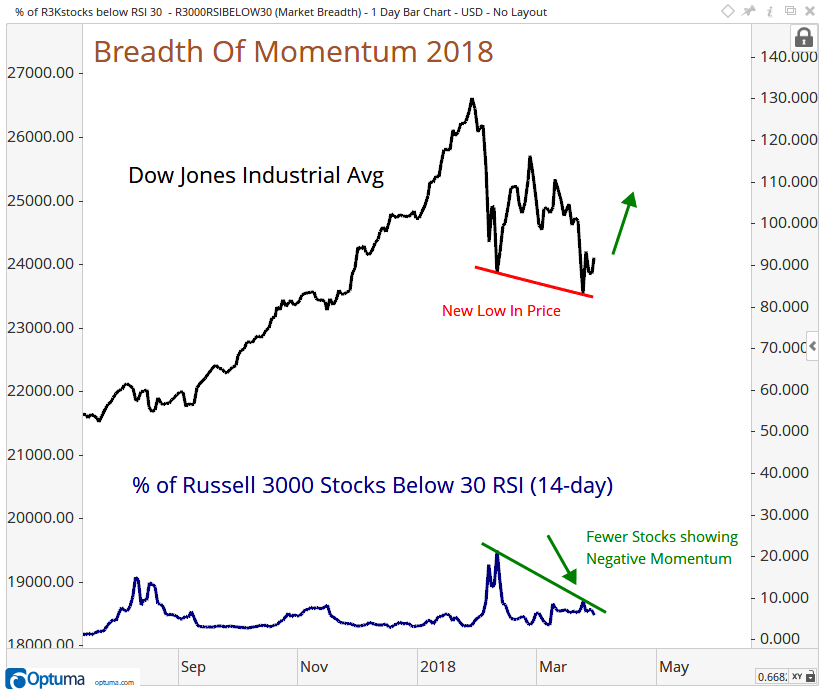 Volatility speculators are on the opposite side of where they were coming into the year. Non-commercials, or the “not so smart money”, have on historic long Volatility positions. We’ve never seen speculators this prepared for a stock market crash. When the market is the most prepared for an event ever, is that event likely to occur? 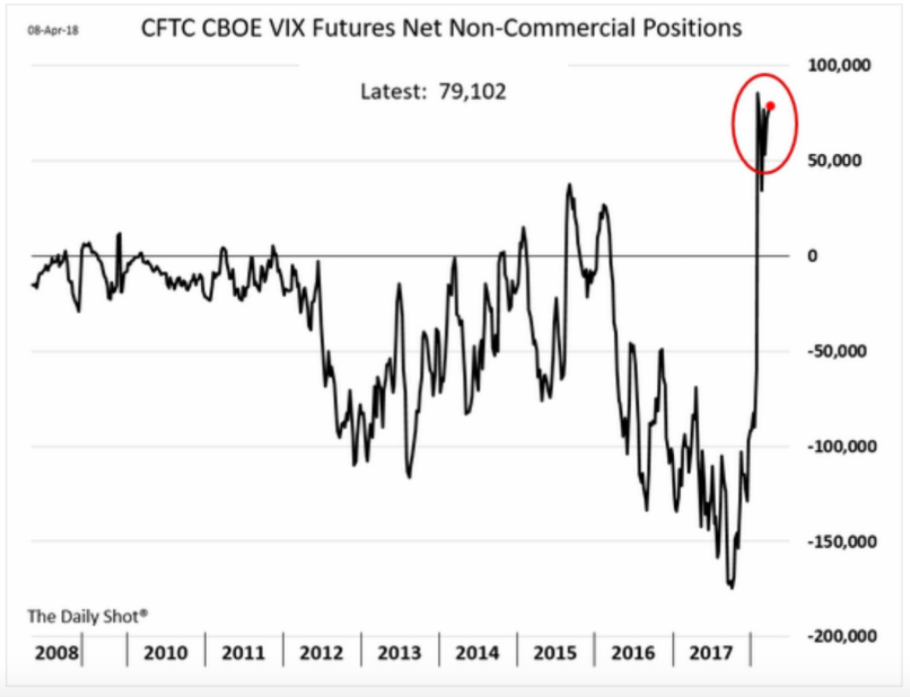 I just don’t see the fuel here set up to drive stocks lower. To me, the fuel is in the exact opposite direction. From my desk, the move will be the unwind of this really expensive insurance policy bought by historically unsuccessful market participants. I think stocks rip and volatility collapses, losing all of these investors a ton of money along the way.

I also have something I like to call the JC Breadth Indicator. It’s something I’ve learned over the years where I just take everything I’m seeing and weight all the evidence. If there is more positive than negative, then it’s hard for the indexes to fall. That’s exactly what we have today: a lot more positives than negatives, particularly in the U.S. Stock Market.

One last thing I’d like to add is from a currency perspective. The US Dollar continues to be in a downtrend ever since the economists behind The Economist, in their infinite wisdom, published The Mighty Dollar issue on Dec 3, 2016: 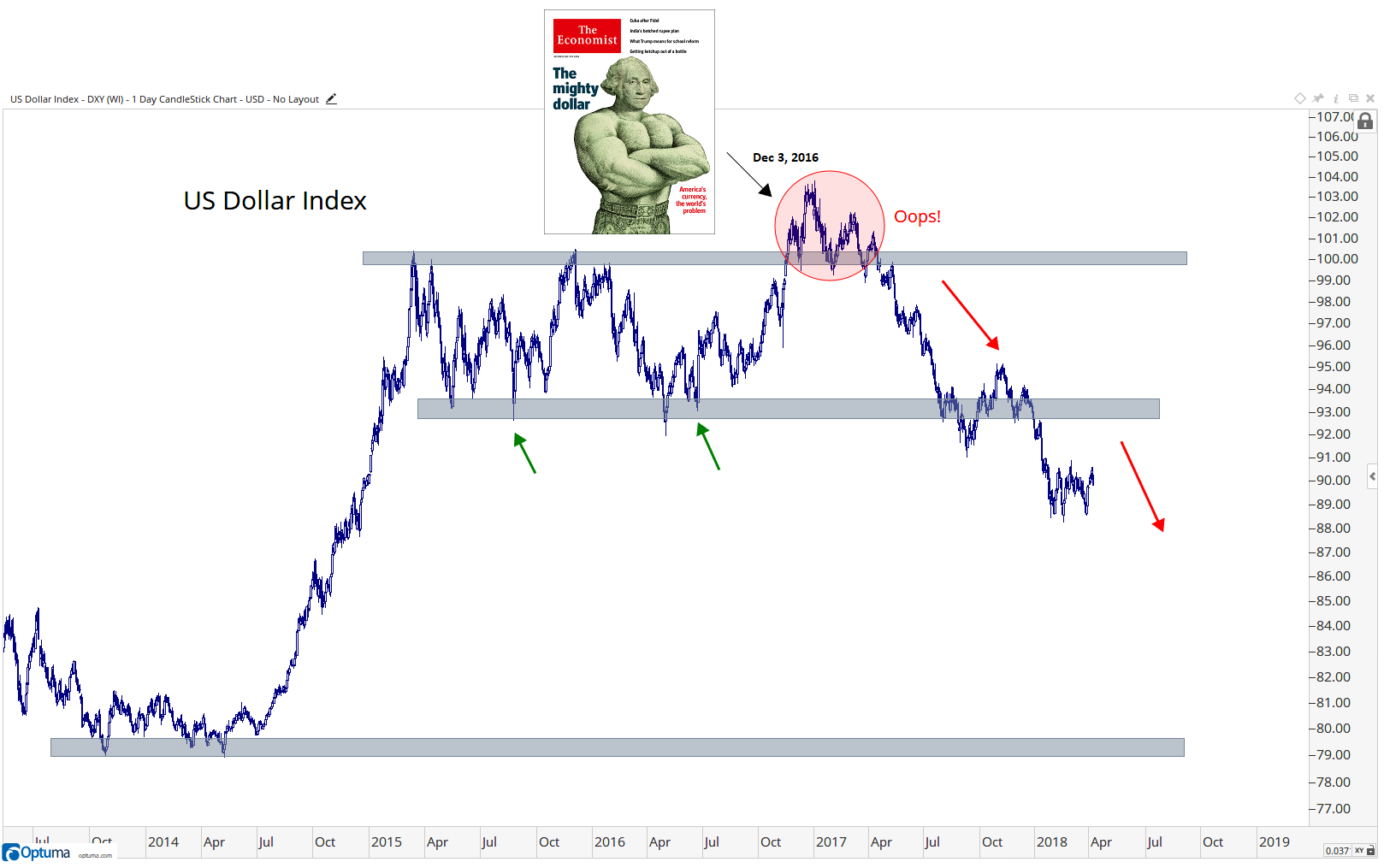 We’ve seen the Dollar do nothing but go straight down ever since. “America’s Currency, the World’s Problem”, the magazine cover proclaimed. It seems apparent that the exact opposite is true.

So a falling Dollar is in line with higher commodities prices, including Copper and Crude Oil, which are tied to the rotation into emerging market stocks that we’ve discussed. This leadership and outperformance from emerging markets makes sense in an environment where stocks are rising, not falling.

You guys come here and read this for my take on the markets. You know I ignore all of the noise, whether political, fundamental or economic. It’s just not for me. While I can’t expect you to go to the extremes that I do to tune out the daily gossip, if you care at all about my advice, I do think it’s best to turn it off as much as possible. I like to take that time to listen to music instead of watching talking heads, read books instead of gossip columns or listen to podcasts instead of people’s opinions. It’s refreshing and quite frankly a better use of time, in my opinion.

The things that matter most are pointing to the fact that stocks are likely heading higher and the sentiment shift the past few months is the fuel to spark that strength. We want to be buying these stocks (Premium).

I hope this helps.