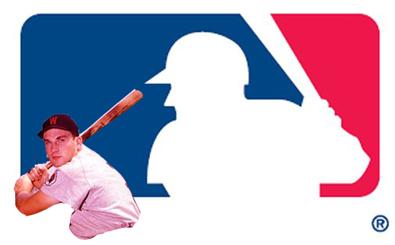 Look Out Below – When to Sell in May (StockTradersAlmanac)

Charts on $LNKD IPO and Thoughts on some Trades (HCPG)

RIP Harmon Killebrew – The Inspiration for the MLB Logo? (YahooSports)

The AAII Investor Sentiment Survey measures the percentage of individual investors who are bullish, bearish, and neutral on the stock market for the next six months: 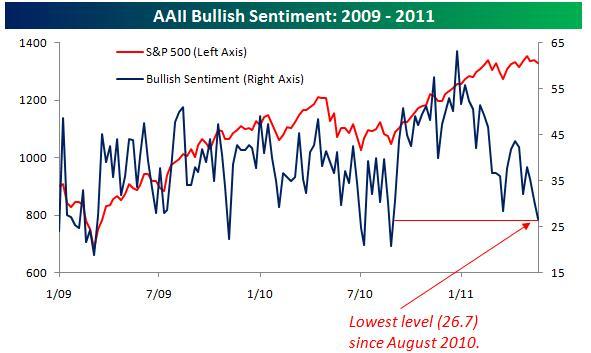 “While business TV anchors are busy watching the LinkedIn ($LNKD) IPO and wondering whether or not we are in the early stages of another bubble, individual investors are heading for the hills.  In the latest sentiment survey from the American Association of Individual Investors (AAII), bullish sentiment dropped below 30% (26.7%) for the first time since August 2010 when the QE2 rally began.  Even though the S&P 500 remains near its highs of the bull market, nearly all the bullish sentiment that was built up during the rally has now been given back.  People like to say that the individual investor is always the last to get in and the first to get out.  This time at least, the individual is making a quick exit.  Will they be too early?”

Individual Investors are getting scared. The S&P500 is 2% off it’s 52-week highs, the Nasdaq100 is 2% off it’s highs, and the Dow Industrials are about 1.7% off last month’s highs. Is this time different? Do individual investors see something that the rest of the market doesn’t? I Doubt it.

Where Have All the Bulls Gone? (Bespoke)

The Social Media sites are finally coming to the market. LinkedIn priced its long-awaited IPO at the very top of the range at $45 a share Wednesday and is scheduled to begin trading Thursday. The company will trade under the symbol $LNKD. I’m sure we will take a look at the price chart once we start trading. For now, keep in mind that some technicians like to look at IPOs like a long base built while it’s been Private. The IPO is theoretically the breakout, or potentially the false breakout, we shall see. If you’re wondering how they are making their money, Silicon Alley Insider presents us with their Chart of the Day. 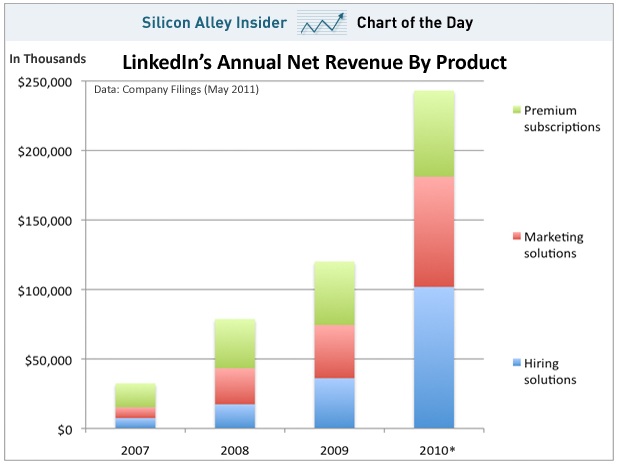 Ladies and Gentlemen, I present to you Brian Shannon:

I’ve been watching Brian’s videos for years going all the way back to the Pre-Stocktwits days. In early 2007 I was already watching his videos religiously on YouTube (Click here for the throwback). After passing the Level 3 exam of the CMT Program, his book Technicial Analysis Using Multiple Timeframes was the first book on Technicals that I read voluntarily. I was actually leaving to Italy to propose to my wife and Brian did me the favor of overnighting the book so I would have it in time to take on my flight. I had it read cover to cover by the time we landed in Rome. Bottom Line – if you haven’t gotten a chance to get your copy, I suggest you do so immediately.

Since those days, Brian Shannon and I have become friends because Stocktwits is so awesome and in February we met and had some beers in New York City. Maybe one day I’ll be able to show him how well a kid from Miami, FL can dominate the ski slopes of his home state of Colorado.

Meanwhile, be sure to check out alphatrends.net and he is a MUST FOLLOW on Stocktwits @alphatrends

Pfizer Canada has modified an assessment chart that was originally developed by the US Air Force, which provides guidelines as to when and how to respond (or not respond) to comments on social media networks.

How to Respond to Blog Posts (ChartPorn)

I keep hearing about this “reversal” yesterday that could be the turning point to this market. Typically I don’t like to analyze just the Dow Jones Industrial Average because it consists of only 30 stocks. However, of all of the major indexes, I think that the Dow Industrials tell the story the best: 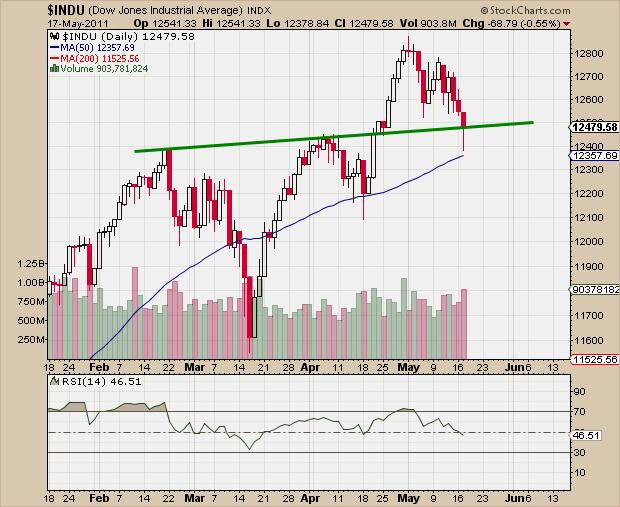 I was taught at an early age to let my trendlines continue. Don’t cut them off for no reason because they’ll probably come into play in the future. Sure enough, here is a perfect example of just that. The “Neckline”, if you will, from the Inverse Head & Shoulders Pattern in the Dow is the green line connecting the February highs to the April highs. Oftentimes there is a retest of this neckline after the original breakout, in this case the one that took place in late April. Yesterday’s retest appears to be successful, but we are going to need to see some follow through today to confirm our thesis. More importantly we need to see some sector rotation into some of the more aggressive sectors that have been under-performing since February and out of the more defensive, now overextended, sectors like Healthcare and Consumer Staples. Financials, believe it or not, were the first to turn green yesterday and showed some relative strength on Monday as well.

It’s going to be an interesting day to say the least. Friday is options expiration so don’t be surprised if you see some wacky action for the rest of the week. Take a look at some of the other major averages and you’ll find a similar story. I felt that the Dow told the story the best, but check out the others for the full box score. 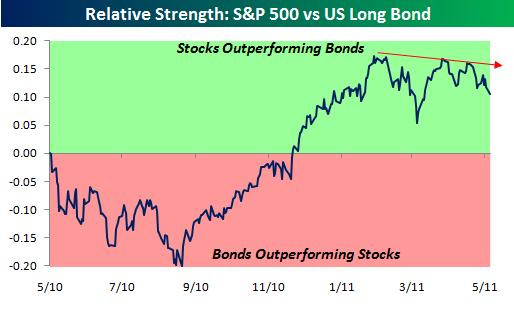