A couple of weeks ago, we put up a post talking about how it was time for Energy to step up. There were a few reasons for this including the fact that the energy space had been underperforming the rest of the market for over two months. And if this bull market was to continue then rotation into energy was not only necessary, but also a healthy characteristic of bull markets.

“Look at this chart of $XLE below. If we draw a trendline from the October highs and down through the January Consolidation, the extension of that resistance level takes us right here to potential support. This price also represents the 38.2% Fibonacci retracement from the October lows up to the February highs.” 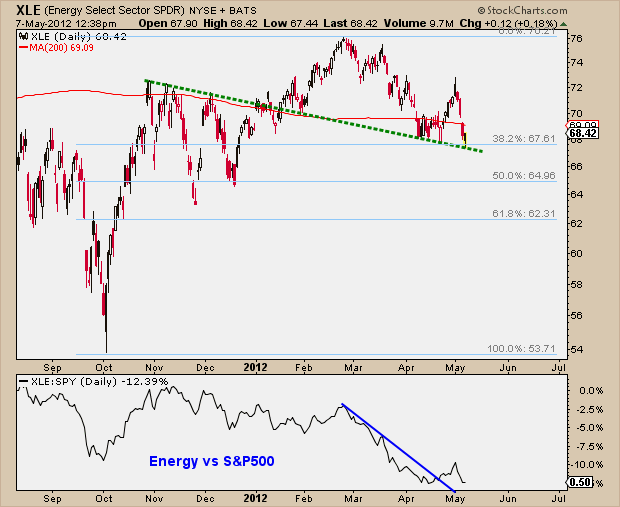 The Energy Sector SPDR ($XLE) rallied 7.5% off those 4/23 lows helping the S&P500 come close to making new multi-year highs and leading the Dow Jones Industrial Average to levels not seen since the end of 2007. But a funny thing happened since that rally: Four consecutive days of new lows entering this morning’s reversal. 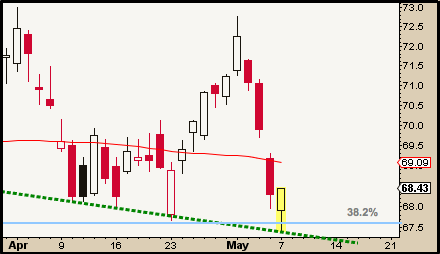 So like we said a couple of weeks ago; If the energy sector is going to rally, then this would be the place where it would get going. This morning’s lows reversed at the same place that it did on April 23, the 38.2% Fibonacci retracement mentioned above, and the extension of that key trendline from last Fall.

As usual, I think that it’s important to watch this space. Some of the key components of $XLE have massive market capitalizations and will have a big impact on the major equity averages.

As far as Energy goes relative to the market, we now have a broken down trendline, a fixed low, and a new high from last week as our point of reference. Going forward, we’ll be looking for a higher high in relative strength as confirmation of a new uptrend in energy relative to the S&P500. A rollover to new absolute lows as well as new lows relative to the market would be a bearish signal for the equities overall.