One of the biggest things the bears have going for them right now is the fact that the 10-Year Yield is trapped beneath the critical 1.40% level. As long as that remains the case, the trend is lower for rates, and higher for US Treasuries. But we want to stay keenly aware of any signs of a trend reversal as we continue to see a barrage of mixed signals when it comes to risk appetite around the globe.

In the chart below we’re looking at an island reversal formation in the 30-Year which recently sent the yield back above its key 1.90% level. Why are we looking at the 30-year? Don’t we usually use the 5-Year as a leading indicator? As always, the tools we want to use boil down to the kind of market we’re in. Right now yields are trending lower while spreads are contracting. This tells us that the long end of the curve is moving at a faster rate than the short end. For this reason, we’re watching the 30-Year for clues on the 10 and 5. And right now, it is above our risk level. Maybe the 10-Year follows and reclaims 1.40. Or maybe the 30-Year breaks back below 1.90% and catches down to the 10. We should know soon.

END_OF_DOCUMENT_TOKEN_TO_BE_REPLACED

This week’s new highs for the major averages lacked confirmation from their peer indices once again. A topic we often discuss is “Modern Dow Theory.” That is, instead of solely evaluating Transports and Industrials for a reading on the broader market, we should also consider the performance of Semiconductors as they’ve become the modern medium for economic transportation.

Despite the Dow Industrials ripping back to close this volatile week out at fresh highs, we’re still not seeing any confirmation from either of these critical indexes. And when we look at the Transportation Average, there is reason for concern as we’ve seen nothing but steady weakness since prices peaked in early May. As for semis, they continue to hold their own but remain trapped in a holding pattern beneath their April highs.

A decisive move above 450 in the Semiconductor Index would go a long way in supporting the latest highs from the Dow and other large-cap averages. 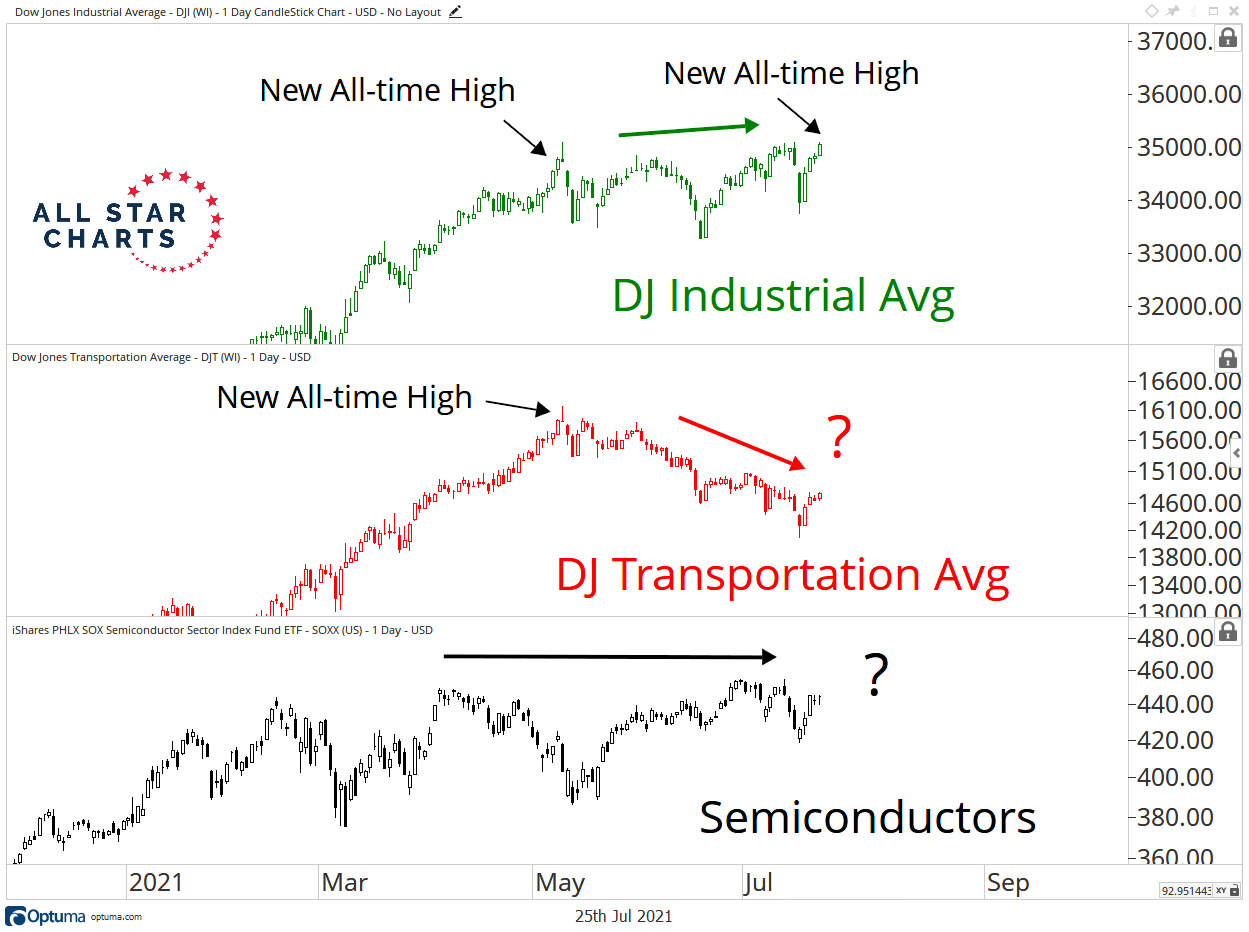 END_OF_DOCUMENT_TOKEN_TO_BE_REPLACED

Markets have been unequivocally choppy. Breakouts are failing, new highs are dwindling, and it’s becoming more challenging to find trending opportunities. Last week, we discussed how Semiconductors failed to breakout, and asked whether its peer industries would follow suit. Well, we have our answer now… One of the strongest industry groups in the last two months, Internet, just printed a failed breakout at its February highs. Software looks frighteningly similar.

Digging into some of the components, Amazon, the largest weighting of the group, is in the process of retesting its September 2020 highs of 3550. And to compare the industry group to one of its peers, Semiconductors have also put in a failed breakout.

When even the leaders of the market can’t catch a sustained bid and hold new highs, we’re usually in an environment where stocks in general are struggling. And they are. If we’re below 243 the risk is in favor of the bears and we could bet on a quick move back toward the year-to-date pivot lows of 208. Although, we have to be open to the fact bulls could quickly repair this damage. If we’re above those February highs we can NOT be short.

END_OF_DOCUMENT_TOKEN_TO_BE_REPLACED

Last week we discussed the underperformance of European banks and the potential implications in the near term for risk-taking behavior.

This week, these suspicions were confirmed when price fell back below a key level, confirming a failed breakout. Similarly, the MSCI United Kingdom ETF, one of the most important economies within Europe, was unable to break above a significant resistance level around 34. Now, both are trapped below overhead supply.

If European financials and UK stocks are trapped below their pre-covid highs, it’s consistent with an environment where markets remain messier for longer and risk assets are vulnerable.

END_OF_DOCUMENT_TOKEN_TO_BE_REPLACED

Base Metals Bury The Hatchet

Dr. Copper often steals the spotlight when it comes to base metals, and for good reason. It’s one of the most economically sensitive commodities. More importantly, it holds a special place in our collective psyche, as one of the major assets that investors turn to in order to gauge the state of the economy, and even investor risk appetite. With that said, the current correction in Copper has raised some concern, especially given the choppy market conditions.

But when we turn to some of the other base metals like Tin, Steel, and Iron Ore, their recent base breakouts are intact. In fact, that’s an understatement. These are some powerful uptrends, and unlike Copper, they just keep pushing higher. While the consolidation in Copper makes sense given the messy market environment and its explosive move since last fall, underneath the surface its base metal peers are indicating an eventual upside resolution is likely. 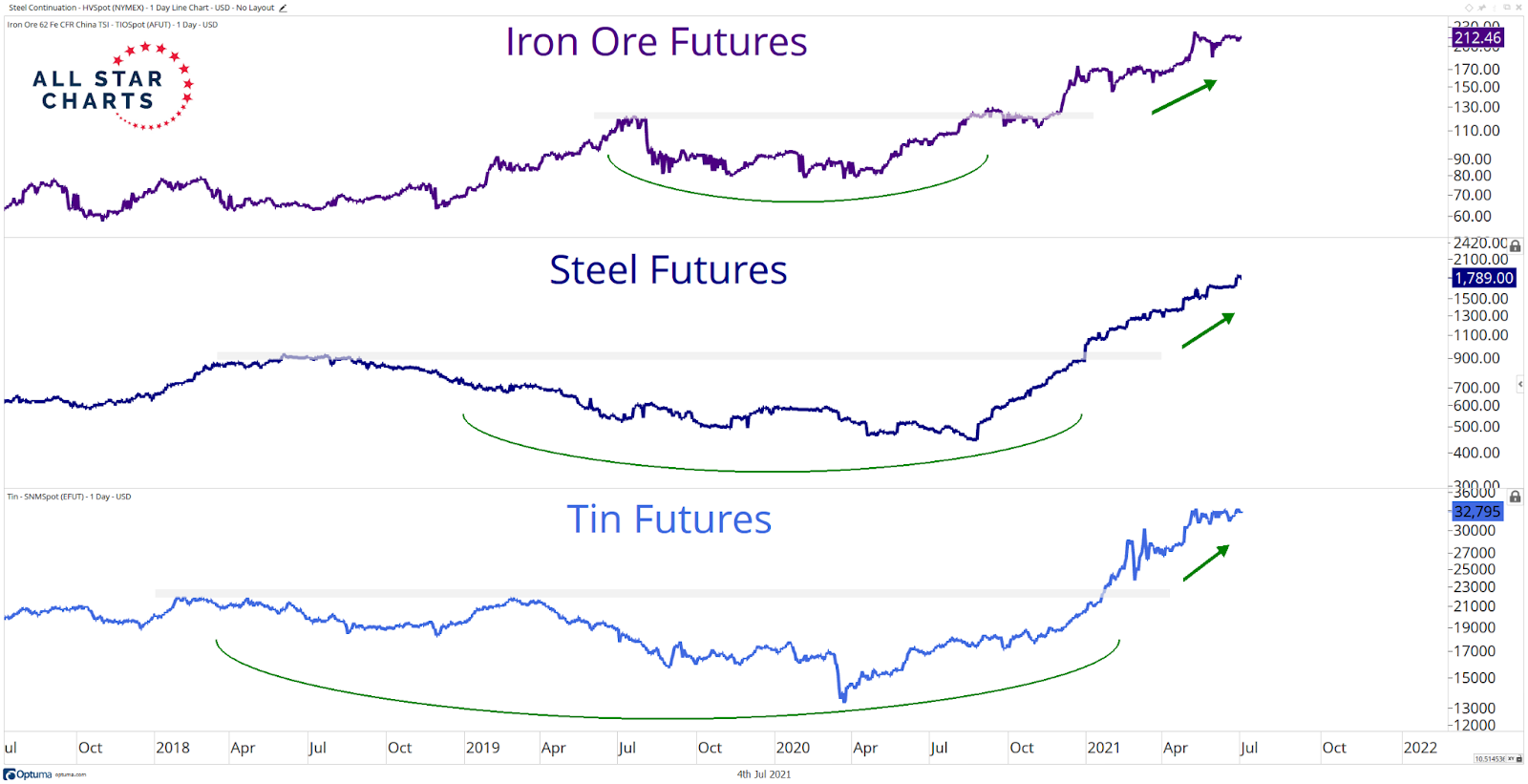 END_OF_DOCUMENT_TOKEN_TO_BE_REPLACED

Energy Futures Turn On The Heat

Crude Oil broke above resistance at its 2019 highs back in June and has been grinding higher ever since despite its energy-related peers remaining beneath their corresponding resistance levels. That changed this week as Heating Oil and Gasoline finally broke out to new multi-year highs. The recent strength from this group comes as base metals continue to correct through time and price. This kind of rotation within the commodities complex is constructive, especially after such a strong run-up off last year’s lows. We think Energy is offering some excellent risk/reward opportunities right now as we’re not only seeing other commodities contracts confirm the price action in Crude, but Energy stocks are also breaking out to new highs (see Chart #5).

As for Gasoline, we want to be buyers of this 6-year base breakout with a 3-6 month target of 3.13 and stop at the former highs around 2.18. Heating Oil broke out of a similar base but still faces some overhead supply at the 2018 highs, thus the risk/reward is not as favorable. Regardless, the bias is higher if we’re above 2.12 and we’re looking for upside toward 2.45 over the near-term.

END_OF_DOCUMENT_TOKEN_TO_BE_REPLACED

Using Caterpillar And Copper As A Risk Barometer

On the topic of high-beta names, here’s a behemoth from the Industrial sector. We think of Caterpillar as an index in and of itself – a barometer for global economic growth, reflation, cyclicality, etc. It’s all reflected in CATs stock price, as it is highly correlated with risk assets such as Copper and Emerging Markets. The stock recently made its first lower low in over a year, suggesting we continue to approach these offensive areas with caution. We’ll be watching to see if Copper, and others… even risk-on forex pairs like the Aussie/Yen, will continue to follow Caterpillar’s path. How much structural damage is endured before we get a tradeable bottom in these assets will provide us valuable insight regarding the future market environment for risk-taking.

END_OF_DOCUMENT_TOKEN_TO_BE_REPLACED

Despite a historic CPI print, yields are unanimously pointing lower, including other vital metrics from different asset classes. Both the Copper/Gold and Regional Bank/REIT ratios have been pointing down for some time, and the all-important High Yield/Treasury Bond spread is shifting to a more bearish tilt for risk assets. It’s pretty clear right now that either the Bond market disagrees that long-term inflation is here to stick around or disagrees with the stock and commodity market on how it’ll affect.

This is where a lot of our mixed signals are coming from right now. Risk assets and commodities, particularly Crude Oil, are pointing to further upside for risk, while the Bond market is beginning to raise some alarm bells. And if we know anything about the Bond market, we consider it smart money. Watch this space… 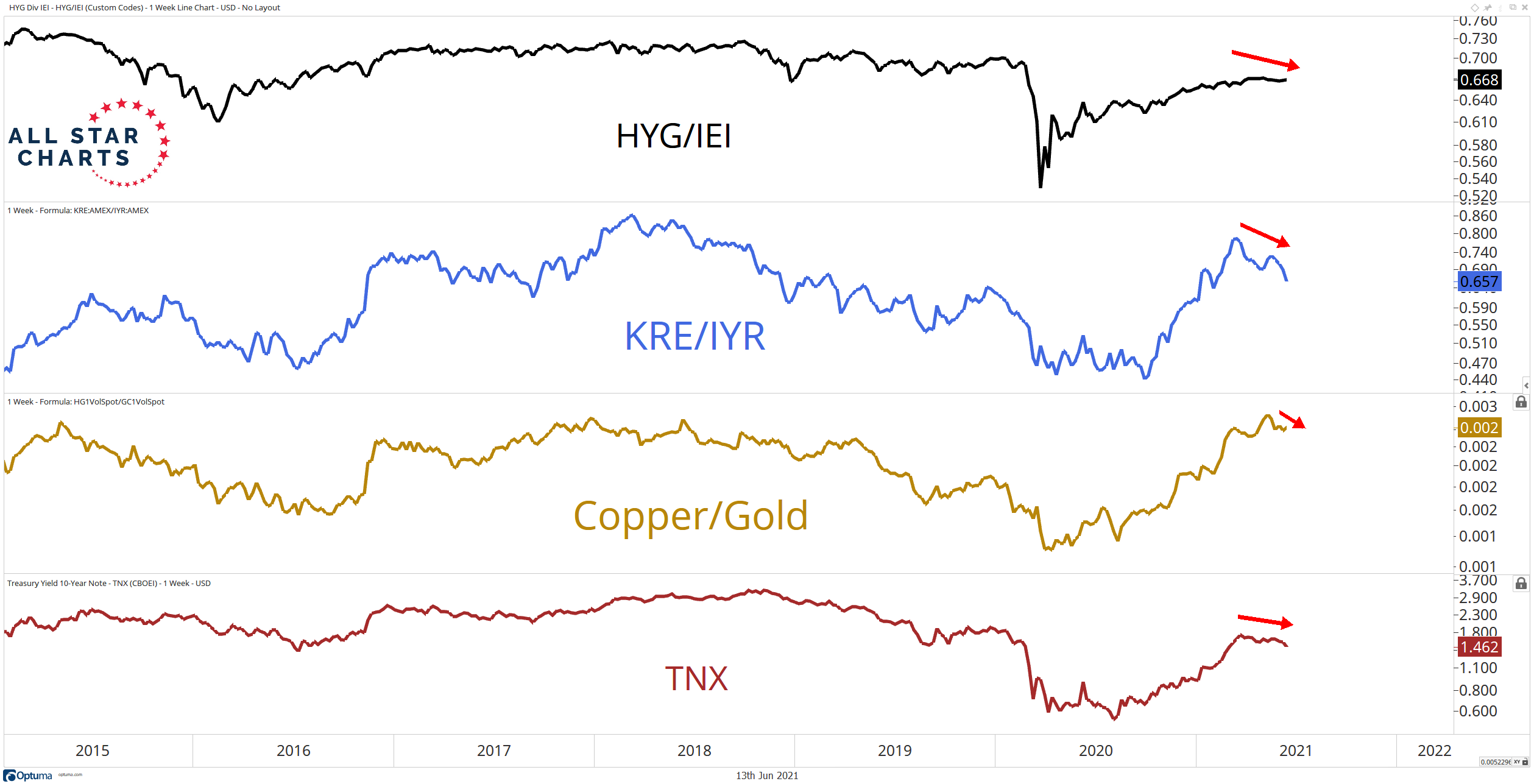