It’s hard to ignore the strength we’re seeing in some of these emerging markets. When stocks are selling off, I like to look around and see who is still holding up well. We call that “relative strength”. Every day I get to speak with traders at the largest financial institutions in the world. They laugh because when everyone is selling, they get to sit there pressing buy buttons and fill their humongous orders that need to get done while they are accumulating a position.

Remember that institutions who manage $10, $20 – $50 Billion have to buy millions of shares of a stock just to have a small position relative to the overall size of their giant portfolios. It takes time to fill an order: days, weeks or even months. Retail investors can just press one button and get an entire fill whenever they want. Since institutions can’t, we get to see it happening if we look close enough. When stocks are selling off, those still staying green and holding up is evidence of buy side accumulation.

Today I want to talk about some of the emerging markets out there where we’re seeing relative strength. It’s impossible for me as responsible market participant to ignore what is happening in this space. Also, you guys count on me to put in the work and point out what stands out.

The first chart is the Latin America 40 Index. That 2014 high has been our target for a while now. I still think that’s where we’re heading, which is over 15% from current levels. That’s not nothing. If we’re above 36 in $ILF, Latin America in general, as well as this ETF, of course, is a long. I think we get back to those 2014 highs: 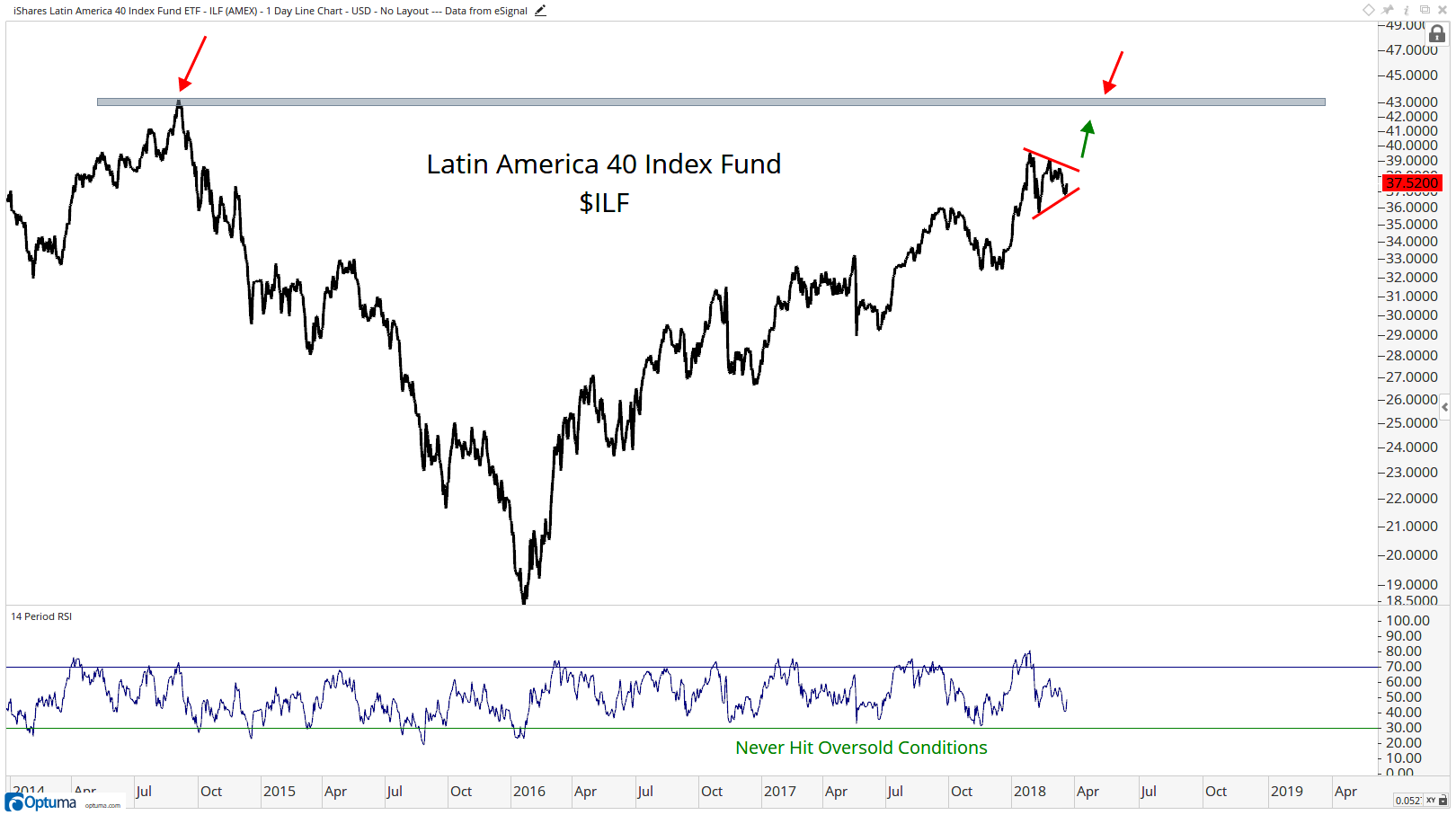 It should come as no surprise that Brazil looks exactly the same. It’s the same trade, but the risk level is 43.50. In $EWZ I also think we get back to those September 2014 highs: 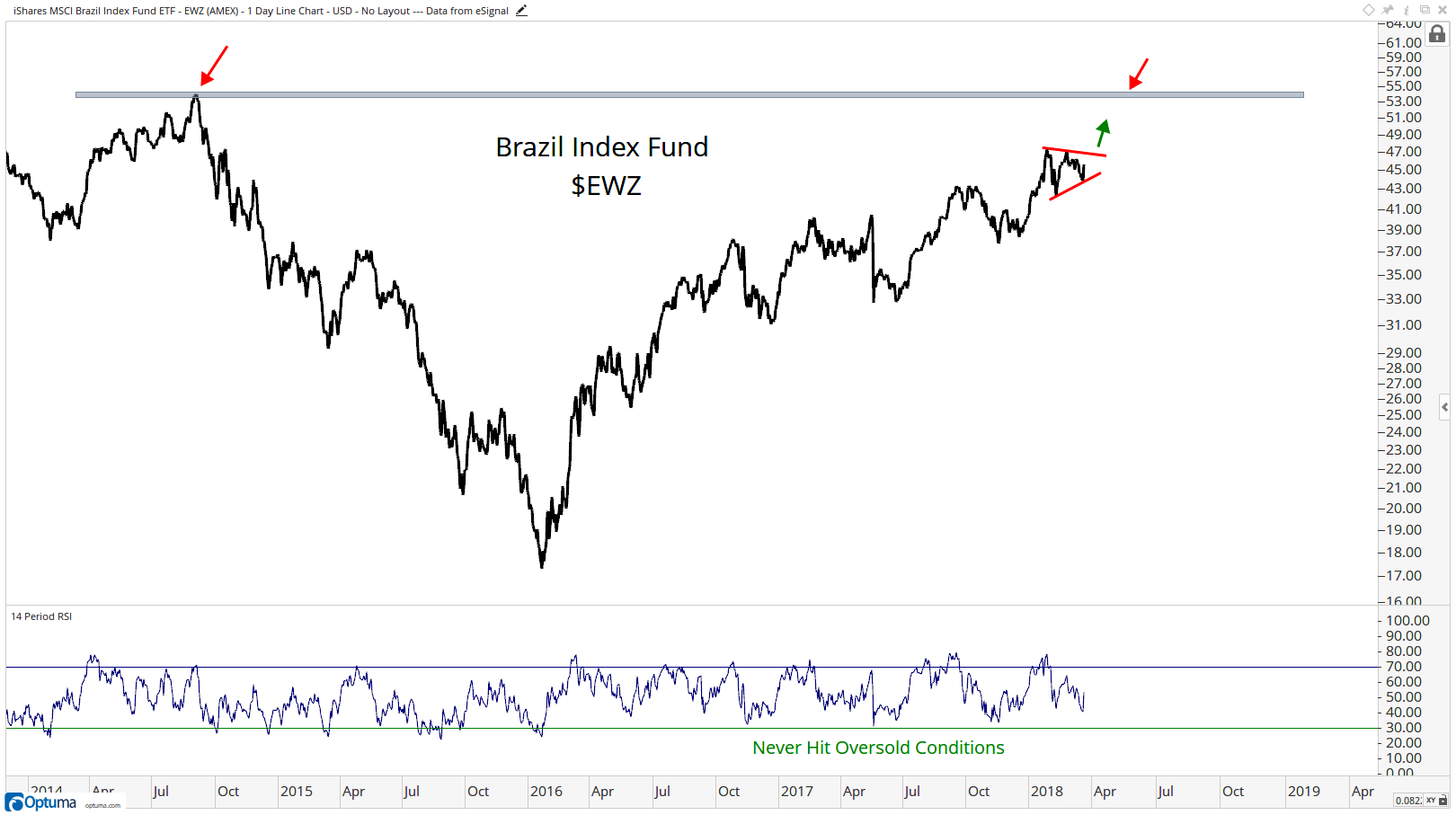 Another one that is right up that same alley is Freeport-McMoRan. Look how it’s a similar consolidation within an uptrend. Also notice how momentum is in a bullish range. That’s the case for all 3 of these: $ILF, $EWZ and $FCX as you can see here. They all have similar exposure to Natural Resources and Mining, which has been a big theme for us coming into the year. We’ve wanted to stay long $FCX if we’re above 17 and I still think we’re heading to 24: 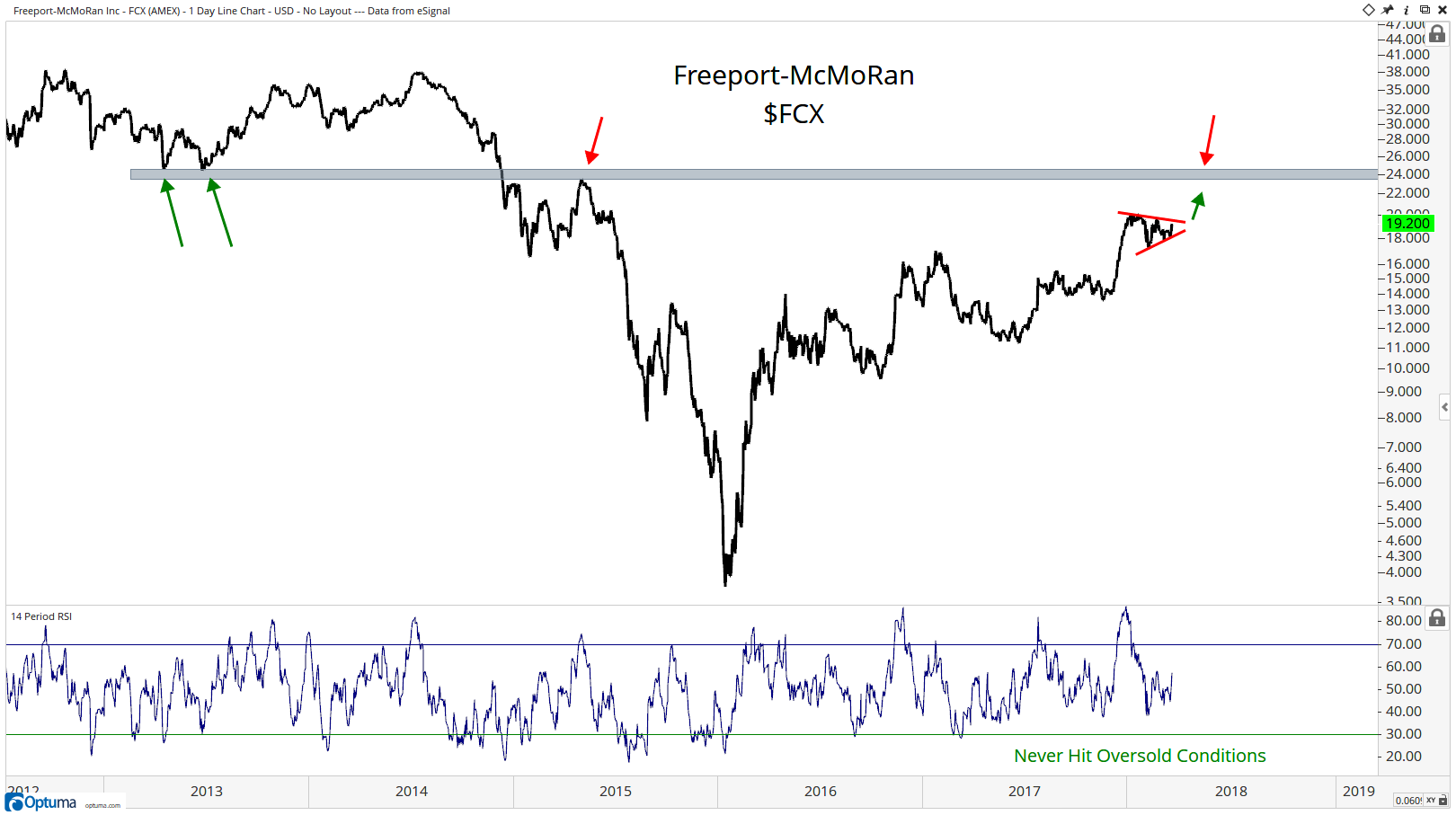 Within the Emerging Market space, I think it’s also worth noting that Vietnam is already pushing towards new highs before these Latin America ETFs and Freeport, mentioned above. So I look at this as relative strength within a larger area of strength. Momentum is also in a nice bullish range here. We like that. We want to be long $VNM if we’re above 17 with a target above 23.50: 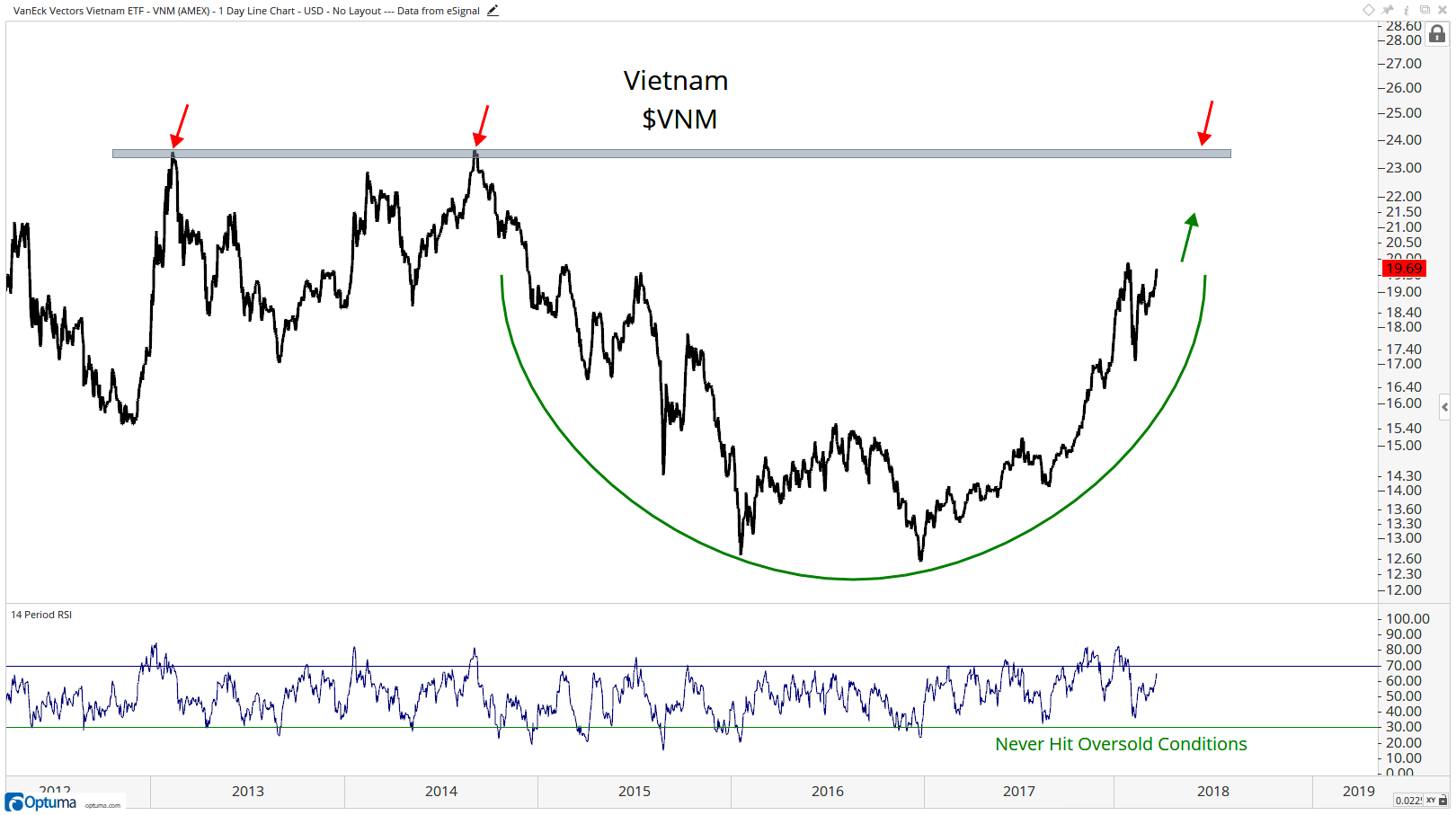 When we’re looking at Emerging Markets, I think it’s only the responsible thing to watch shares of Caterpillar. As one of only thirty components in the Dow Jones Industrial Average, it’s obviously an important stock. But when you compare it to the MSCI Emerging Markets Index, you can really see how closely they move together: $EEM and $CAT – 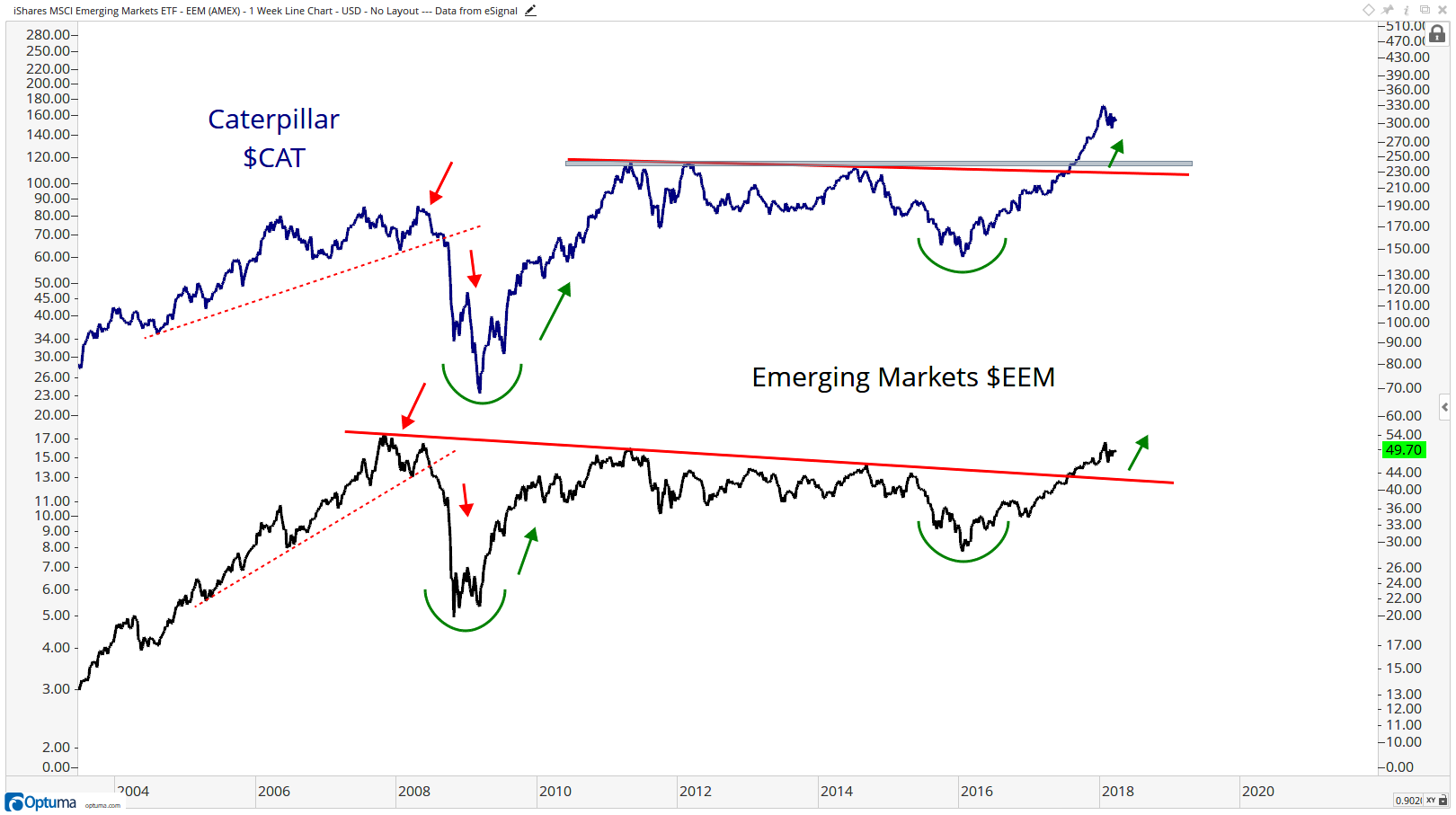 I think keeping an eye on Caterpillar is probably a good idea. If we’re above 146, we want to be long $CAT with a target near 185. If we’re right on $CAT, then we’ll most likely be right on everything else. If $CAT is below 146, then in all likelihood this entire bullish thesis is wrong, at least for now: 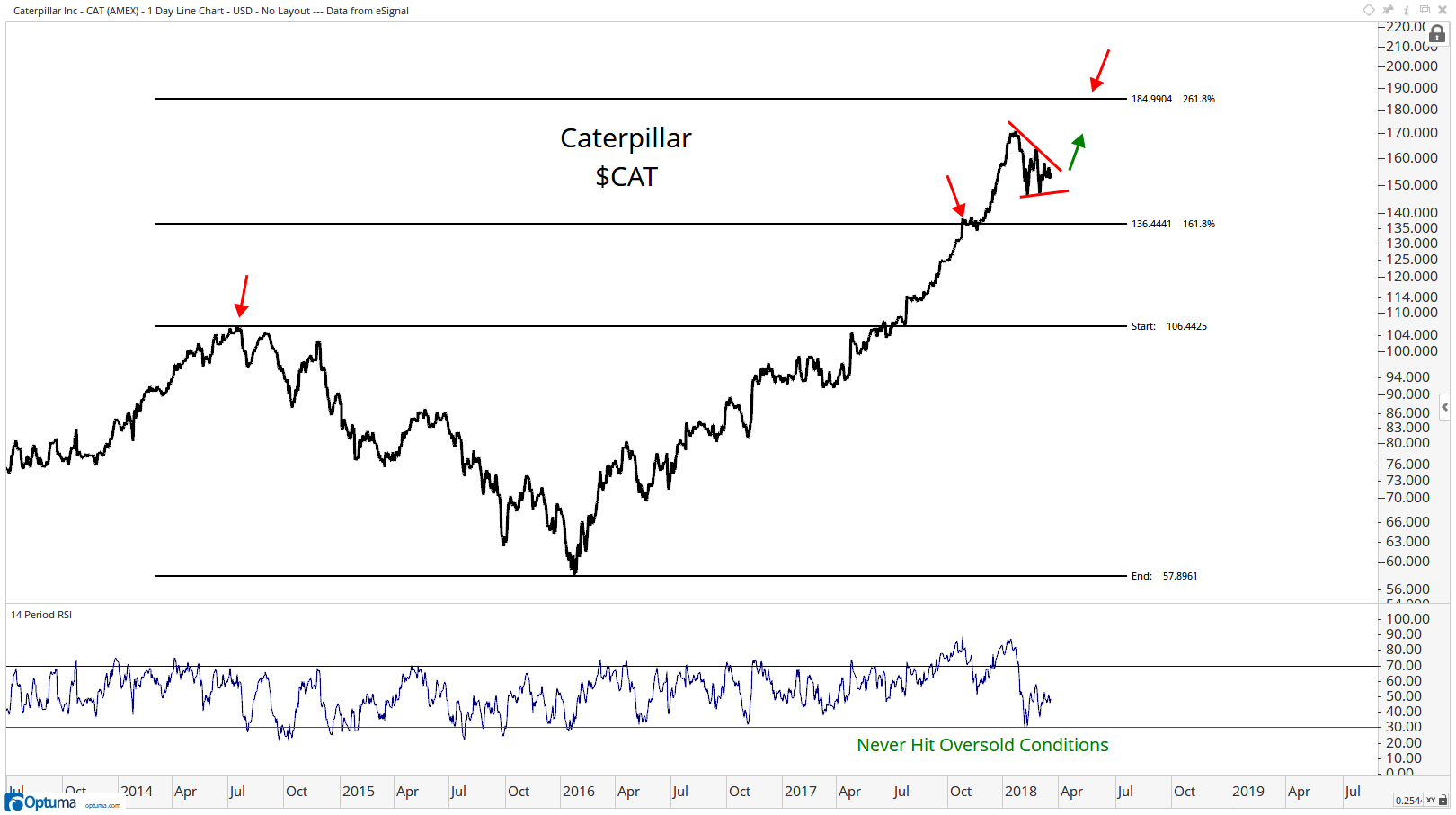 Based on the weight of the evidence, the trend here is suggesting higher prices. We want to be buying all of this stuff on weakness if we’re above our risk levels.

If you have any questions, you know where to find me.