This week was definitely a volatile one. You can tell people are starting to get a little bit more emotional about this market. Phil and I did a quick video about some of the things we’re seeing out there. We discussed the continued strength in dividend paying names, weakness in the resource space, money flowing into US Treasuries and some important S&P support levels.

Something that I think is worth noting here is what’s happening in US Treasury Bonds. With Gold breaking those key support levels we mentioned last week, precious metals are the ones getting all the attention. But how is all this volatility in commodities going to affect stocks and bonds?

This is a daily bar chart of US 10-year note yields. After trading within a fairly clean uptrend channel from last summer, it appears yields are attempting to break down here: 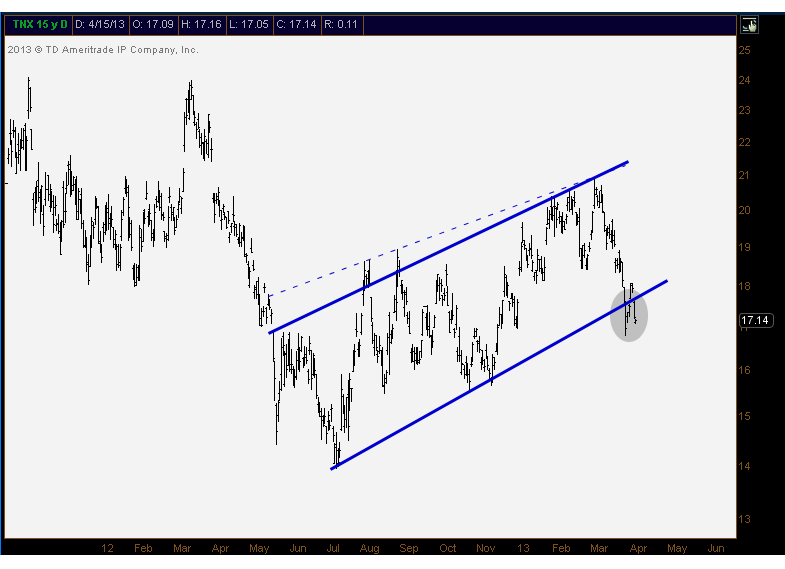 Government bonds prices rallied hard at the end of last week. I also don’t see them getting much attention. All everyone wants to talk about is gold and silver. I mean, they’re a lot sexier than Treasury bonds right?

Either way, there are definitely some interesting developments in government bonds, at least from where I’m sitting. Stay tuned.

US Treasury Bonds are at an interesting level here. And the resolution could impact asset classes all over the world. We look at Treasuries as a safe haven. To us, they’re a place where money goes when they don’t want to be in risk assets like stocks or economically sensitive commodities. So if Treasuries are rising in price, there’s a risk-aversion trade to be had. The opposite is also true if there is major selling in this space.

Today let’s look at $TLT which is the iShares 20+ Year Treasury Bond Fund ETF. We like this one as a fair representative of the US Treasury bond market. It’s also liquid and easy to trade. The first chart is a weekly going back 5 years. Look at the 2008 highs that were also the 2011 highs right near 123 or so. In June of this year, $TLT was able to take out that former resistance but has come back down under 123. The question here is whether that was indeed a real breakout and this is just a retest of (new) support? Or was that a false breakout that just could not hold? 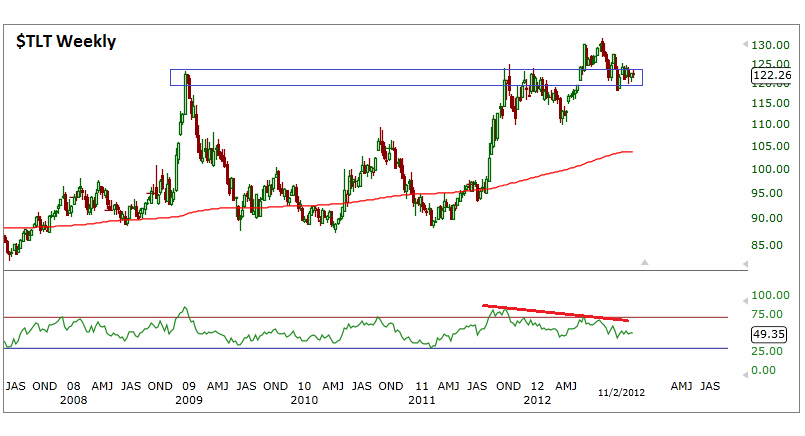 We like to look at the Relative Strength Index (RSI) for clues. And sure enough, when prices made fresh highs this summer, RSI was already rolling over putting in lower highs. This bearish divergence calls into question whether this was a real breakout or just a bull trap. Momentum rolling over here is a ‘heads up’ that further selling could be coming.

Now let’s look a little bit closer. Here is a daily chart showing all of the lower highs since July. The fixed support down near 120 appears to be the line in the sand. The Bearish Divergence this summer between prices and RSI got the sell-off going. If these support levels are taken out, there could be some hard and fast selling to come. 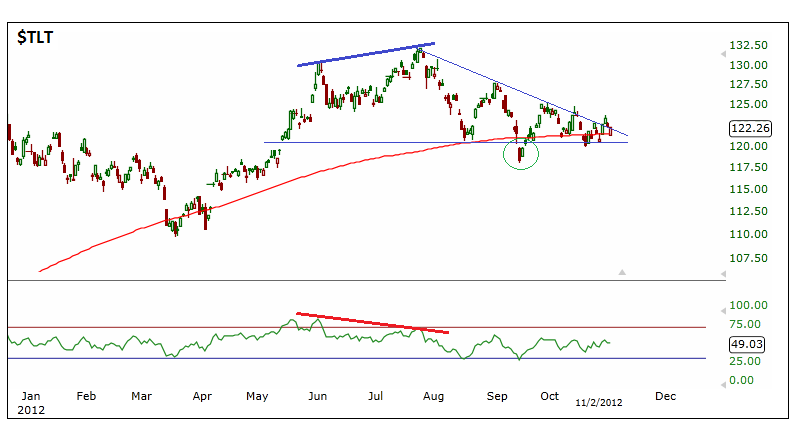 From a risk management perspective, we’re keeping an eye on this downtrend line from the summer highs. If that gets taken out to the upside, it would be evidence to us that Treasuries are not ready to break down just yet. But the more times that a level is tested, the higher the likelihood that it breaks. And this support keeps getting hit. I think a breakdown here is inevitable. But we’ll just have to wait and see.

That was a pretty big move in yields that we just saw. The gain was a quick 14% after crossing the 50-day moving average on a gap higher (see here). In total we witnessed a 30%+ move in less than a month. But then came the dreaded downward-sloping 200 day moving average putting a halt on the whole advance. At least for now.

In addition to the resistance from the slope of the longer-term smoothing mechanism, we also have to remember that key support from December through February right here at the levels. How could we not acknowledge that all of that former support should add to the supply right here? I think it would be naive for us not to recognize that some time is needed for both the moving average to at least flatten out and for some sellers to do their thing. And that’s OK. 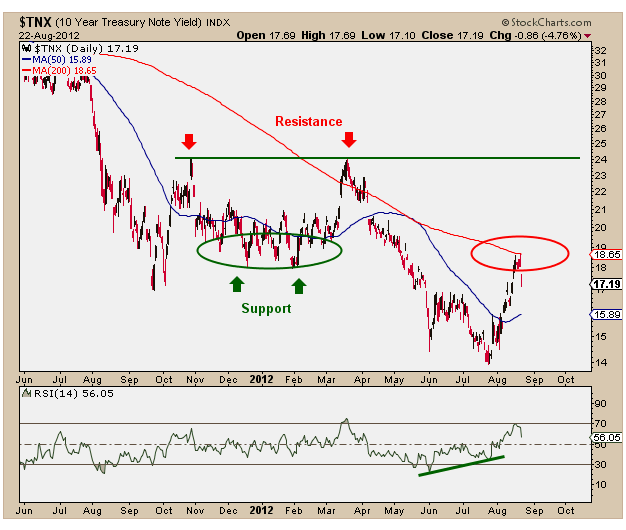 It looks like after some time has passed, yields should continue higher and get up to the next resistance levels near 2.40%. That represents close to a 40% move from current levels. But I don’t think we’re there yet. I would wait for yields to chill out a bit, gather some composure and get ready for the next move higher. But not expecting much before Labor Day.

We’ll be looking for a move back above last week’s highs to signal that another major move is coming. But that should take some time. And again, that’s OK.

How about this for a Chart of the Day?

With 10-year Treasury Note yields reaching an all-time low of 1.43% Friday, this is something that we have to put into perspective. The chart below shows US Interest rates going back 220 years, to at time when this country was just getting started. This is some chart.

It has almost a 100% correlation to the Federal Reserve’s daily constant maturity series. Construction is explained at Bianco Research.

With the 10-year yield below 1.5%, some traders said it is hard to predict how low the yield could fall, because in a sentiment-driven market, panic buying could push the yield down further.

“We are in uncharted territory” in terms of yields, said Kevin Walter, head of Treasury trading at BNP Paribas. “The 10-year yield could hit 1.4% very quickly if sentiment continues to worsen.”

UBS analysts, who put out a call several weeks ago that Treasury yields are still too high, said their model shows a fair value of 1.2% for the 10-year yield, though they admitted that level “sounds too aggressive,” and that “something in the 1.40% neighborhood [for the yield] makes sense to us.”

What Is The All-Time Low 10-Year Yield? (Ritholtz)

To really understand where we are in bond yields, let’s take a look at 112 year chart. This really puts things into perspective doesn’t it? Thursday, the 10-year Treasury Bond yield settled at a record low 1.706%. 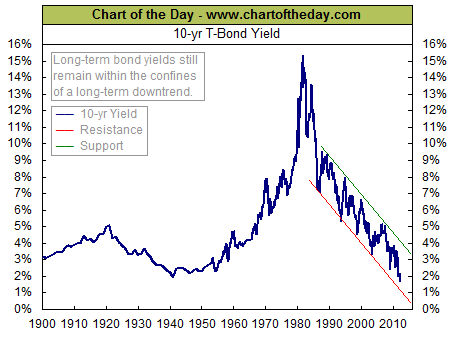 The good folks at ChartOfTheDay.com added some support and resistance lines to define the current trend channel. By their calculation, there is still some more room to the downside.

This is happening at the same time that TIPS, or Treasury Inflation Protected Securities, are paying a record low negative yield. Buyers of these bonds are willing to accept a negative 0.391%. In other words, investors are agreeing to receive a smaller amount of money paid back at the end than what they originally lend out to the government.