Readers of this site know by now that my favorite trade setup is the infamous “false move”. It isn’t the text book chart pattern that I look to take advantage of. It’s when those patterns DON’T work out the way they’re “supposed” to that gets me excited. We’ll use our momentum indicators to help identify when there is potential for these events occur.

The latest false move we could be witnessing is in US 10-year yields. It’s really very simple: 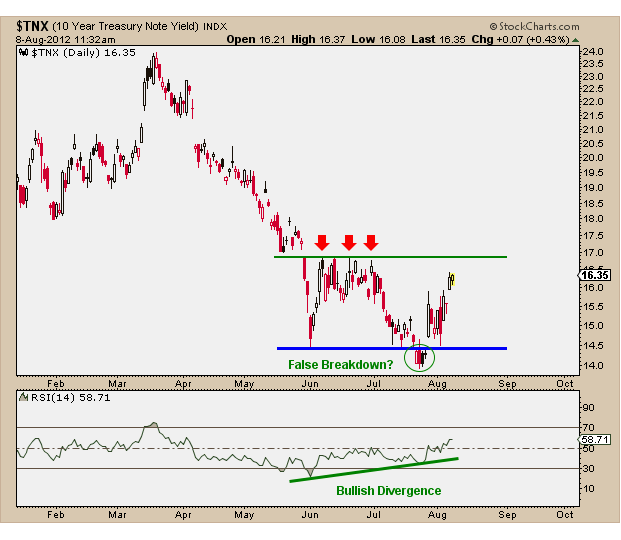 2- While $TNX was making a lower low, momentum (RSI) was putting in a higher low. This bullish divergence tells us not to fully trust this “breakdown”

3- After 4 days below 14.40, Yields gapped higher Friday morning back above that “broken support”

5- The new rally is fueled by a combination of natural longs, shorts unwinding by buying back, and original longs buying back because they are no longer in the trade after having been stopped-out (the opposite in the case of bonds)

8- The upcoming resistance is at 17.00 from a gap lower on May 30th. This level also proved to be plenty of supply throughout the month of June so we know this level is important

Guys this is my favorite setup. It’s why I get up in the morning and look through my chart book. The false breakdowns typically provide enough fuel to get a serious rally going and we could be in the beginning stages of a monster rally in yields. Meanwhile, put up a chart of the inversely correlated Treasury bond prices and look at what a disaster they are right now.

We know that yields have a positive correlation with risk assets in general so if this indeed is a “false move that leads to a fast move in the opposite direction”, I would expect Equities & Commodities to keep rocking.