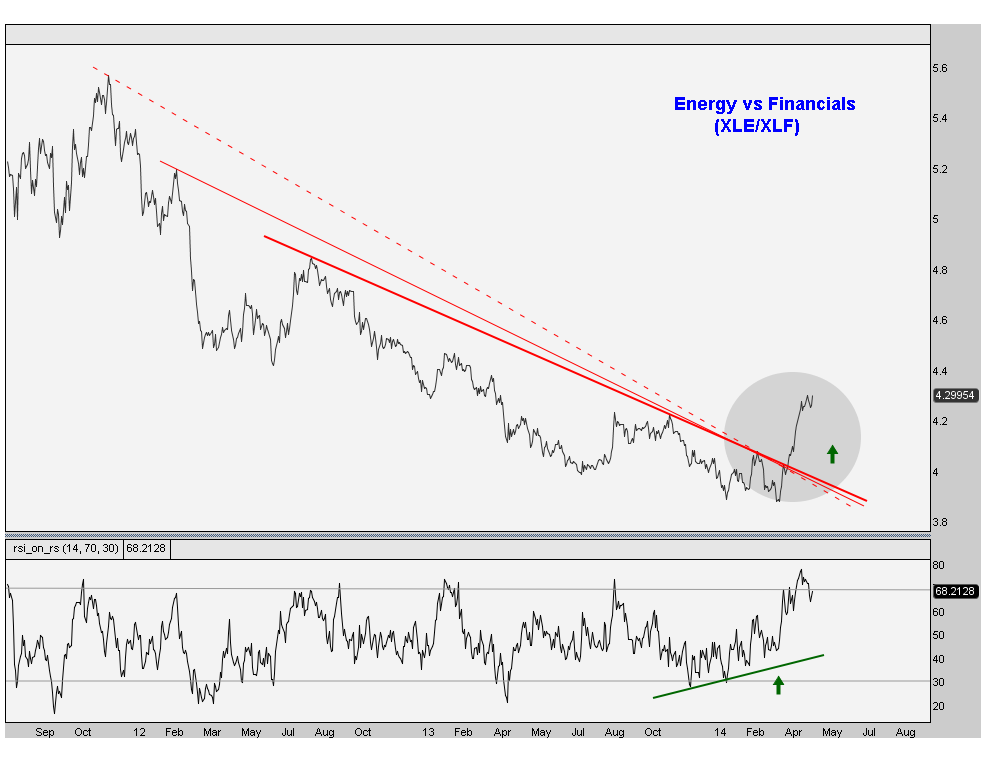 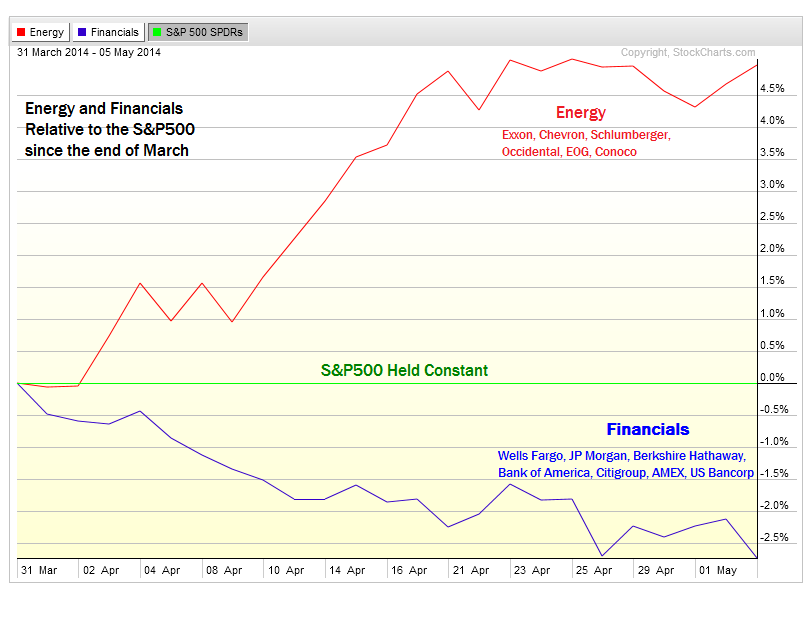 Shares of Bank of America are soaring today on news of Morgan Stanley’s downgrade of $BAC to “Equal weight” from “Overweight”, whatever that means. You have to laugh at this kind of stuff right?

I suppose, that in theory, this is negative news for $BAC stock. When a stock can’t go down on bad news, I take it as good news. 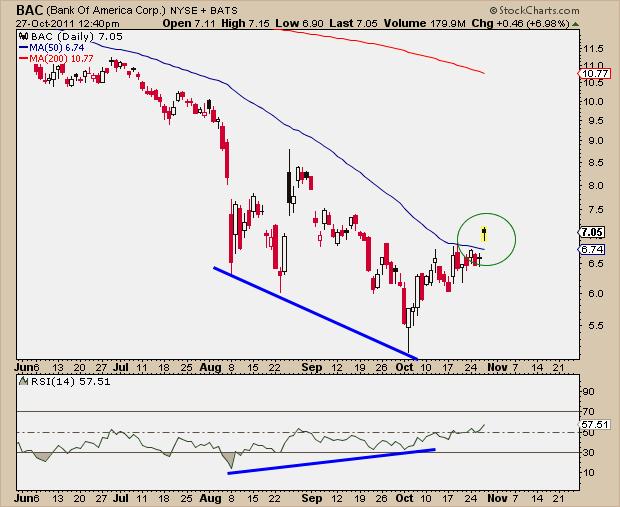 I realize there is a ton of news coming out of Europe that has an impact on all stocks, not just Bank of America. But on news of the downgrade, $BAC is up over 7% as of this writing. This means that today, it is outperforming $XLF $WFC $USB $BK among many others. Underperforming, however,  relative to Morgan Stanley ($MS) today, which is up 15%.

All joking aside, I have to take this action in Financials as constructive. Big Gap up today in $XLF out of this range. A little back & filling here is welcome.

I know I know Financials are a disaster. They really are though. Technician John Roque has been all over this one constantly preaching to stay underweight financials. I don’t disagree at all. However, every now in then there is nothing wrong with a little reversion to the mean trade as long as you’re managing risk properly. I’m in the camp that the market is healthy and that this long consolidation resolves itself to the upside. That is still to be proven. At the end of the day though, money needs to be put to work. Or not put to work and hide in other assets such as Gold or Cash or Treasuries. I’m not a fan of Treasuries here or too much Cash, but I do like precious metals. How can you not? But for a trade, just for a trade, banks are worth looking at because I think they present a decent risk/reward right here.

The Financial Sector ($XLF) sets us up with a trade that has an easy exit below this week’s lows. RSI is showing a bullish divergence that could add fuel to the fire. Most importantly, in my opinion, is that the low made on Monday could not hold and could create the short squeeze that takes the sector a lot higher. 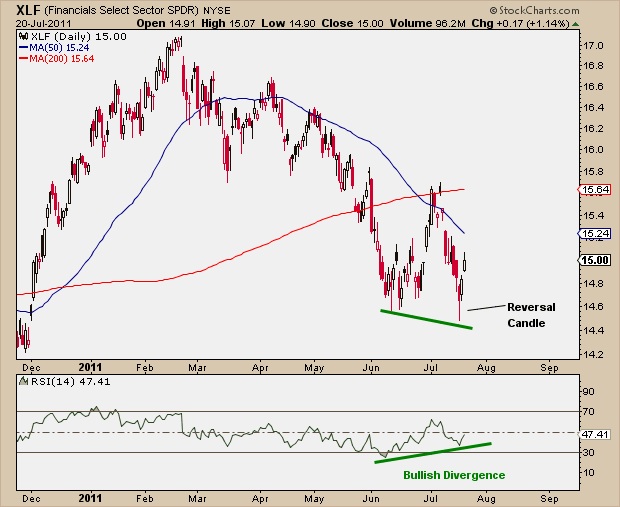 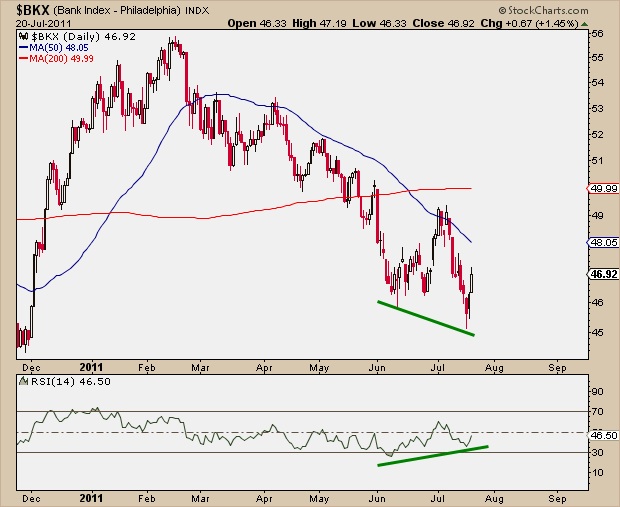 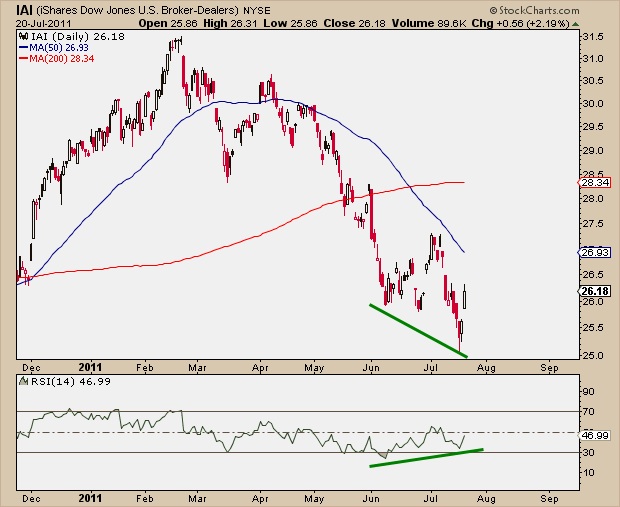 From a company specific point of view, some banks look worse than others. Before yesterday, Bank of America ($BAC) was down 9 days in a row. 9 days in a row? Really? How is that even possible? Well before Tuesday, Gold ($GLD) was up 10 days in a row. It just goes to show you that we are in a market environment where it does not pay to be trading in the direction of the major averages. Because there is no direction. Pick your spots: your longs and your shorts. This is good example of that: 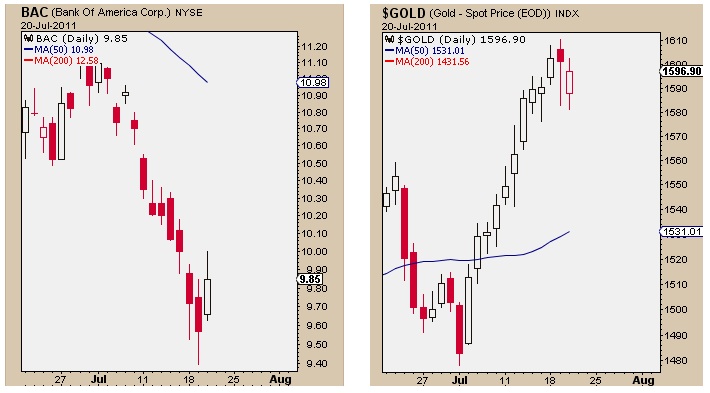 Anyway, getting back to the bank stocks, I would look for the best risk vs reward set ups that correspond with your objectives and risk tolerance. Listen, some of these names look like death: $BAC $GS $MS $JPM. Other names, however, didn’t make new lows this week like $C and $BK. There are a few that actually look stronger than others, $USB and $WFC, but probably won’t get the high beta, reversion to the mean move that you might get in the horrible looking ones like $BAC. It really all depends on what you’re looking for and how much you’re willing to risk.

Risk is the key word here. The old saying goes that,

Bottom Fishing Can Be Very Hazardous to Your Wealth

This is very true my friends. So have your exit strategies in place before pushing any buy buttons. The recent lows are where I would put mine.