We’ve seen some very interesting developments out of Bank of America lately. A month ago I put out a note about why I saw a great shorting opportunity in $BAC. It’s been a long time since I’ve received so much hate mail. Looks like I really hit a sensitive spot with this one. I learned early on that when so many people get offended, and so many of them disagree with such anger, I’m usually on to something. So far this is proving itself out well.

I still hate this name and I think bottom fishing in Bank of America is a terrible idea. First of all, Financials as a group continue their streak of underperformance. $XLF for example peaked relative to the rest of the stock market last July. This has been a serial underperformer for almost an entire year, regardless of what the permabulls might tell you. In fact, since mid-July last year, Financials are the worst performing sector in the United States of America.

So here is why I still hate BofA. Gaps lower on weekly charts scare the heck out of me. I take gaps on weekly charts a lot more seriously than those on daily charts, especially in such a liquid name like $BAC. These occurrences are rare. Look how bad this looks as the stock breaks a key uptrend line: 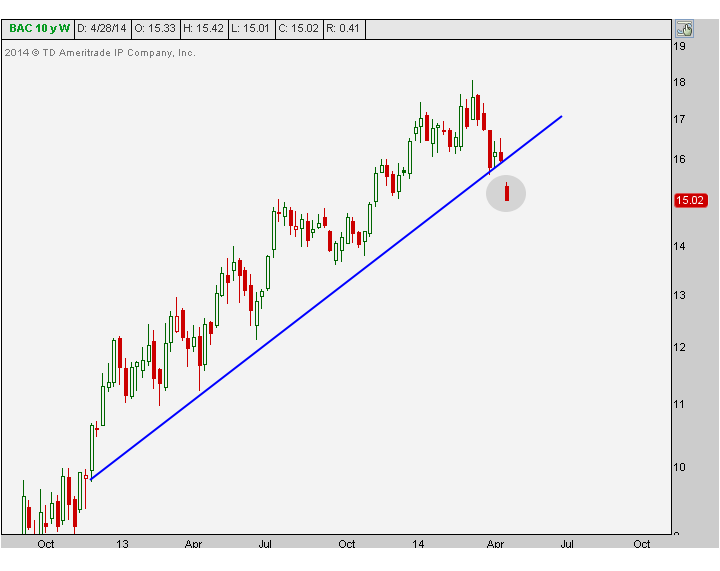 Now look at this thing on a relative basis. As prices made new highs in early March, momentum was already rolling over. That new high in relative strength turned out to be a text book failed breakout and now we’re seeing the results. Relative strength is also breaking a key uptrend line confirming what we’re seeing in the absolute price. 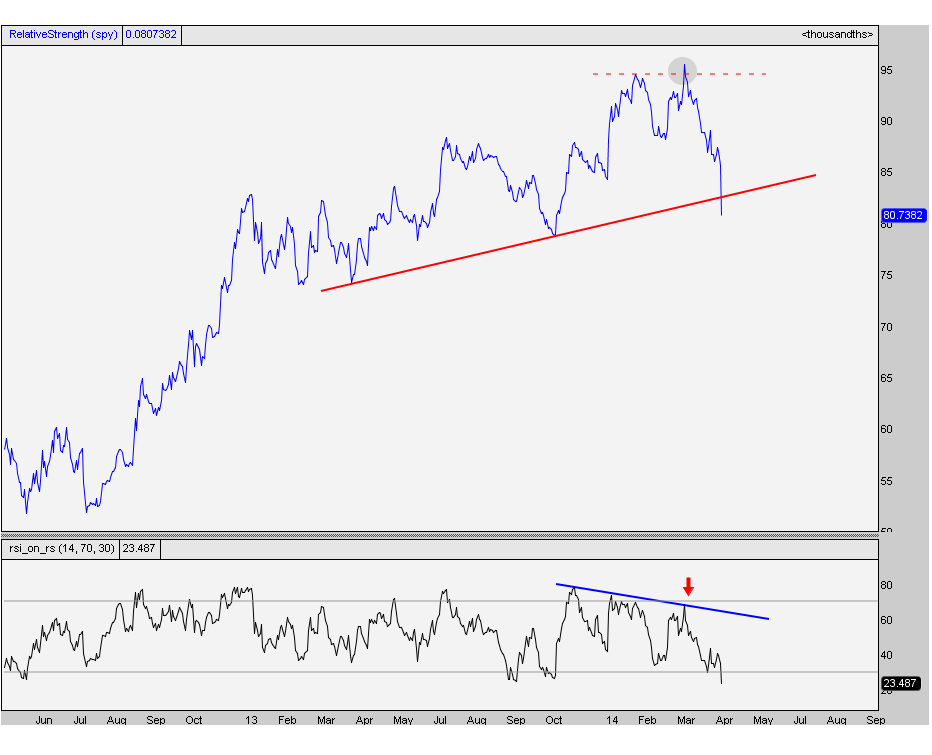 It looks to me like shares of Bank of America have a lot more downside to go. This is a terrible sector that the permabulls absolutely love. One of the most fascinating things to watch was all of the permabulls bottom fishing banks all the way down to zero throughout 2008. I learned so much that year watching other people getting crushed. I think we could see something similar. Maybe not an epic market crash like 2008, but shares of $BAC could see 12.50-13 very easily. And they can go a lot lower than that. This was a $5 stock 2 years ago.

Look out below. This is one we want to keep fading. I’ll keep you guys posted on the hate mail and I’ll let you know if it slows down. This call got people very angry. When they give up and finally admit they’re wrong, that’s when it’s time to cover. I don’t think we’re anywhere near there yet.

REGISTER HERE for more information on how to access updates on these charts on a weekly basis.