Okay, so maybe the whole world isn’t watching the New York Stock Exchange Composite Index. But they should be. While everyone is busy arguing about rate hikes and greece and at Nasdaq 5000, the real breakout we should be discussing is what is likely to occur in the good ol’ NYSE Composite. You see, this is a market-cap weighted index, meaning that the largest companies represent a larger percentage of the components in the index. While many of the popular indexes are similarly weighted, more than half of the biggest 100 companies in this particular index are based outside of the United States. 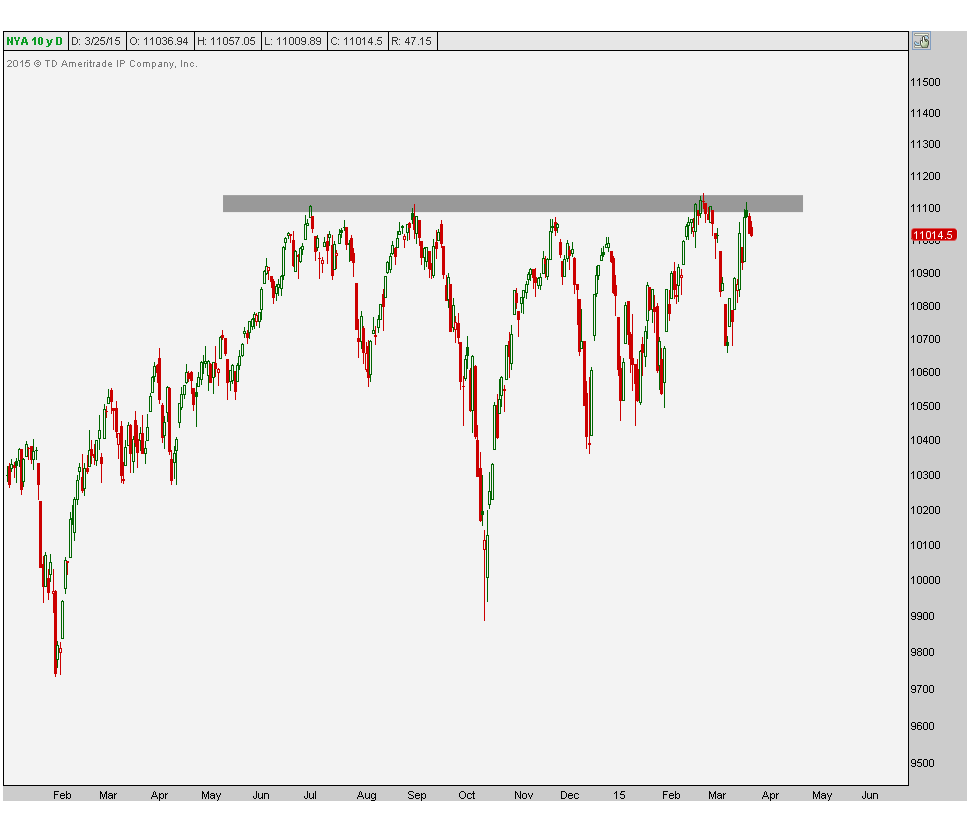 The way I see it, the more times that a level is tested, the higher the likelihood that it breaks. It’s like if you punch someone enough times, maybe the first few times they can take it, but if you keep hitting them, eventually they will fall. It works the same way in the markets. We are patiently waiting for an upside resolution here. If we are to break out above all of this overhead supply, globally it would make it hard to be bearish bigger picture.

So maybe the whole world isn’t watching this. But perhaps they should be.

Coming into the new year, there were plenty of reasons to be bearish about the US stock market. I’m not going to go over all of them here because you can go back and read what I had to say back then. But one of the most important characteristics of this market, its breadth, has been diverging negatively for some time. My friend Josh Brown touched on this topic today and influenced this follow up post.

The chart that has really annoyed me is the list of NYSE 52-week highs compared with the price of the S&P500. As cliché as it might sound, this is a “market of stocks”, and not necessarily a “stock market”. For S&P’s to continue to make new highs, more and more stocks need to hit new highs; not fewer.

This is a daily line chart of the S&P500 going back over a year. Behind it is an area chart representing the list of new 52-week highs on the NYSE smoothed by a 5 periods to clear our some of the noise. This bearish divergence simply cannot be ignored: 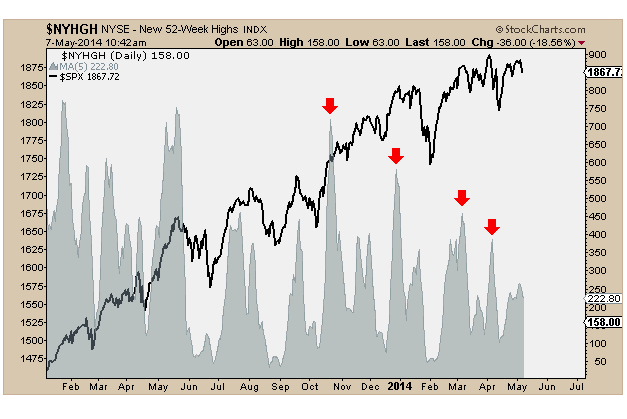 These divergences can be seen in both directions. If you go back to 2008/2009, as the S&P500 was getting crushed, the list of NYSE 52-week lows peaked in October of 2008. After a brief rally, when S&Ps made new lows into November, fewer NYSE stocks hit a new 52-week low. The breadth of the market was already improving. Ultimately at the final low in March of 2009, most of the stocks on the NYSE had already put in their bottoms. The components of the market were telling us that things were improving, although the headlines still read, “S&P500 hits lowest levels since 1996”.

These days, as you know, the headlines have read, “S&P500 closes at an all-time high”. But we know that the actual breadth of the market has been deteriorating for some time. Just like in 2008/2009, I think this divergence will lead to a major reversal in trend. In this case, that would mean lower prices for the S&P500.

REGISTER HERE for more information on how to access these breadth statistics and others on a weekly basis.