One of the advantages that we have as technicians is the ability to look at every market. And when I say market I don’t just mean other stock markets like in Europe, Asia and South America, but also other asset classes like Commodities, Currencies and Bonds. We’re not limited to being, “a technology guy”, or an “energy trader”. We can be a technology guy or trade energy stocks and commodities, but we don’t have to if the risk/reward isn’t there.

Today I want to focus on US Stocks, specifically the S&P500 as we enter the new year. I’ve been relatively quiet on the blog, stocktwits and twitter to start the year while I’ve been running through a lot of charts and screens. I’m trying to really get a good feel for this global market while also eliminating any preconceived notions I may have had in the 4th quarter and the low volume, low participation holiday trading days.

I’ve been ripping through thousands of charts of markets and asset classes from all over the world, but live in the United States. I live and work in midtown Manhattan. The Dow and S&P is what’s being discussed every single day by everyone around me. And this will continue to be the case whether there’s a good risk/reward opportunity in this particular market or not. That’s just the way it is.

So after looking all over the world, I ask myself, Is long the S&P500 right here to start the year the best risk/reward out there? Here is a weekly chart of the S&P500 Index. Look how we’ve rallied right into the upper boundary of this multi-year wedge: 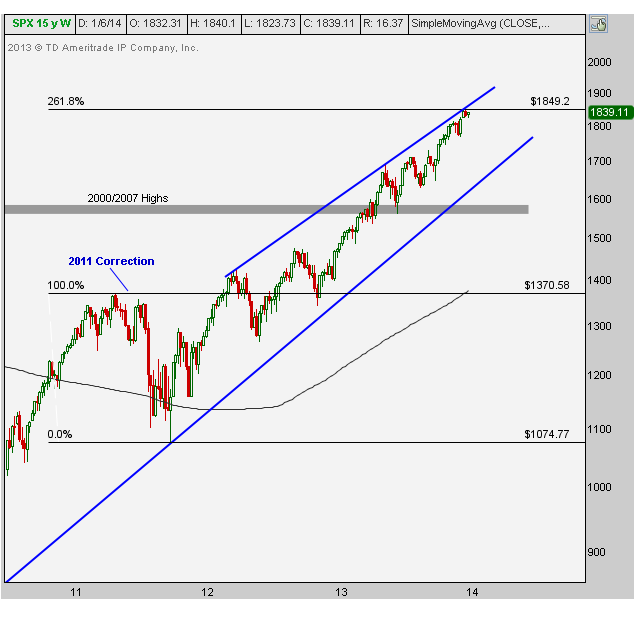 Notice how the highs for the year so far came right at the 261.8% Fibonacci extension target from the last correction we saw in this market. Some have argued that the 2011 correction was a cyclical bear market in itself, as it declined 21.5%, and therefore reset the market after the initial thrust off the 2009 lows. I don’t know if I buy that since the correction lasted just 5 months. I personally like to see a bit more symmetry time-wise in circumstances like this. But either way, that declined scared the living daylights out of market participants reminding them of 2008. We are now running into an important extension target from that correction.

So again, we ask ourselves, Is this where we want to be a buyer? And Is this the market we want to be buying aggressively? I have to say no. I think there are better opportunities on the long side in other markets and other assets. I’ll do my best to share some of those over the coming days and weeks.

What do you guys think? Are you initiating long positions in S&Ps or into stocks or funds that are positively correlated with it?