What a run it’s been for stocks in India over the last few years. I really love everything that we’re seeing out of that country. A year ago I was pounding the table to get long India though some of the more liquid US ETFs (see: Not All Emerging Markets Are Created Equal). While the other BRIC nations were breaking down to new lows, Brazil and Russia specifically, India was somehow breaking out to new highs. Relative strength like that simply cannot be ignored. It would be irresponsible to. Sure enough, look at India a year later and look at these disasters in Russia and Brazil. What a joke they’ve both become….

Anyway, India is our main focus today as the Nifty Fifty hits all-time highs. Here is the long-term chart showing the beautiful uptrend over the past few years within the context of a much more massive run up: 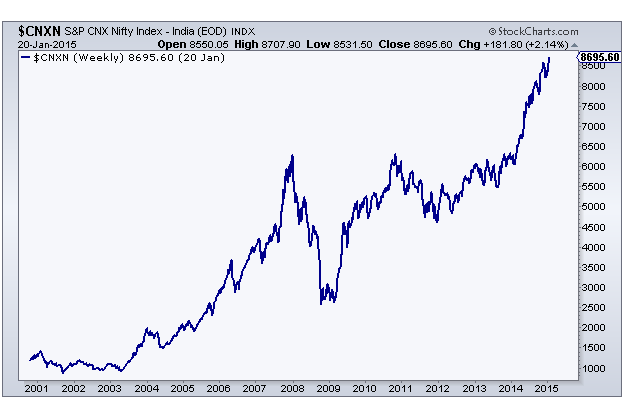 Today I simply want to point out the consolidation over the past 6-7 months since the initial explosive rally in India early last year. We’re looking at a daily bar chart of the Wisdomtree India Earning Fund $EPI which includes holdings like Reliance Industries, Infosys, Tata Motors, some Indian Banks, etc. etc. Excuse all of the spacing between the bars, but a global ETF like this that trades opposite hours to its U.S. ETF will gap up and down almost daily. With that said, look at this thing breaking out: 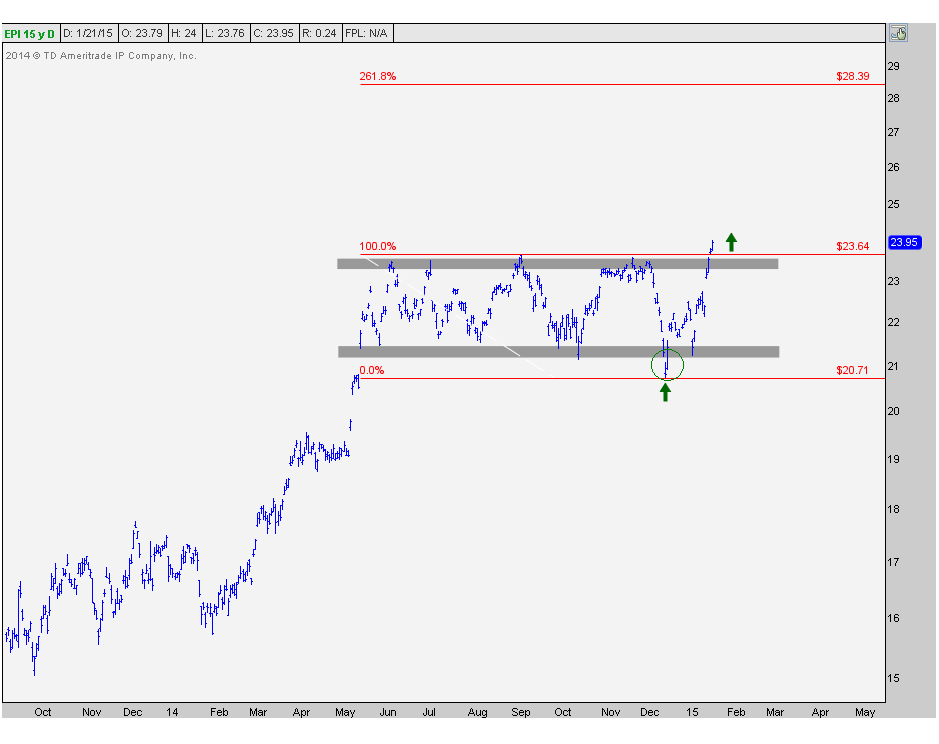 Notice how in December, prices briefly broke down below the bottom end of the range, only to quickly bounce back into it. That, in my opinion, was the catalyst to finally break this out to new highs. When people talk about “Emerging Markets”, it tends to be all of them as a group with different, random weightings. I do this myself. But I think that some of these are so different than others, that not only should we look at them and compare them as a group, but looking at each one on its own is important as well. For example, India looks nothing like Russia….

Based on the size of this base I think there could be a lot of upside in this name. The old saying is, “The bigger the base, the higher in space”. The measured move target alone based on the vertical length of the base takes us to 26. But I think the fact that we are talking about such an obnoxiously extended base (where I have been waiting so patiently for a resolution), can take us much much higher than 26. The 261.8% Fibonacci extension of the base is around 28.50. That looks to me like a reasonable target.

From a risk management standpoint, this is only something we are willing to be long above the highs from the past 6-7 months. Below that and we are back into this range that we do not want to be a part of. So the most important thing, to me at least, is the risk/reward. In this case, it is obviously very much skewed in favor of the bulls.

From a sentiment perspective, I think there is just way to much hate towards India right now. Our data suggests that we had historic bullish sentiment last May, which is typical of market participants being too late to the game. They loved it most at the worst possible time; at the top. They didn’t like it anywhere near as much when it first broke out in February/March (see here). So now that the India ETF has done nothing since then, they are starting to hate it again. How do you not love to see that? We are actually coming off bearish extreme levels that haven’t been seen for years. I think this breakout could be for real. I don’t hear anyone talking about it. They’re too busy with the ECB and deflation and other things that don’t matter to us.

We’ll stick with price and sentiment. And this one tells us the risk/reward favors the bulls.

SIGN UP to receive updates on these charts above at least four times per month on multiple timeframes along with over 40 other country ETFs around the world.