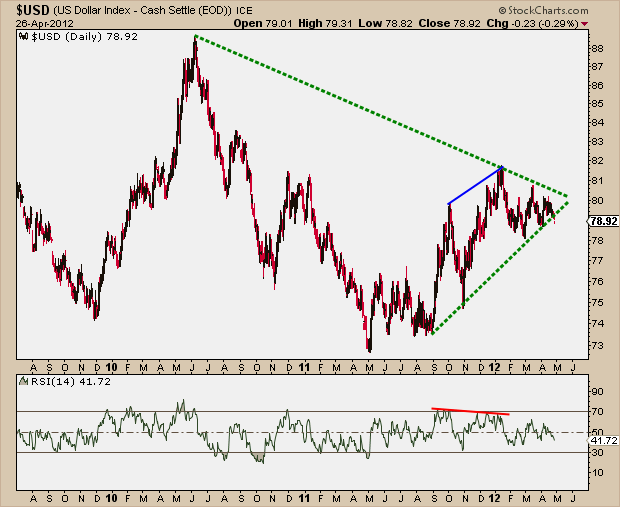 Happy Presidents Day everyone. I’ve been on a little bit of a blog vacation over the last couple of weeks but we’ll be back in full force going forward. Here is my morning post for SFO Magazine this Friday:

After nine consecutive days of losses, the gold miners finally had their up day. And this wasn’t just any positive candle either. The Japanese have named this particular type of daily formation, a “bullish engulfing pattern.”

The body of this candle has essentially engulfed the previous four days of trading. The more full days engulfed by just one, the more bullish the set up. Most importantly, yesterday’s action brought the $GDX back above its 50-day moving average.

All of this short term action comes within the context of a much bigger and much more powerful trend that is already in place. The critical highs in $GDX came in early 2008 and again in late 2009 around the low to mid-$50’s. That key resistance was broken in the Fall of 2010 and the new found support has held throughout the past year. These laws of polarity could not be more apparent that in this recent price action.

For the last year or so, the gold miners ETF has been consolidating in about a ten point range. The breakout this past September turned out to be a false one leaving $64 as the most critical level. Since the false breakout, the downtrend line that is in place should be tested again very soon.

As we say and see all the time, “the more times that a level is tested, the higher the likelihood that it breaks through.” In this case, we have witnessed 4 tests of resistance with the fifth setting up this week. 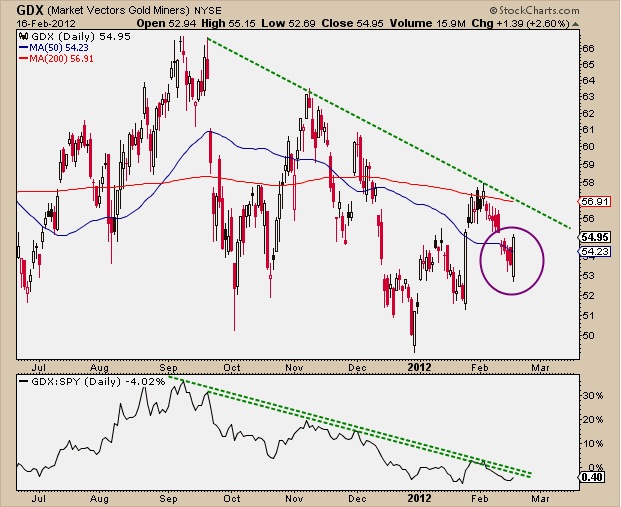 If this breakout above the trendline occurs soon, I would expect another test of that $64 resistance mentioned above. This would be the fourth or fifth test depending whether you are using pencils or crayons to draw your trendlines.

Once again, “the more times a level is tested, the higher the likelihood that it breaks.” In this case, you are looking at about a $10 range coming to an end, so the measured move is about $10, giving the gold miners ETF a target somewhere in the mid-$70.

All The World’s Gold (Chartporn)

Katie Stockton, MKM’s lead Technical Strategist, wrote in a report yesterday that Gold is oversold from a short-term perspective and appears poised to resume its uptrend. We talk a lot about the precious metal itself here on Allstarcharts, but in this case they are talking about the miners. More specifically, Katie Stockton and MKM suggest placing bullish bets on the Junior Gold Miners.

“$GDXJ is also oversold and appears poised for a relief rally, with initial resistance near $32.50 a share,” Katie Stockton, the firm’s lead technical strategist, wrote in a report. Last week’s “oversized 8.7% drop” in GDXJ, she added, appears to have created at least a short-term buying opportunity. MKM’s recommending long directional exposure to the ETF. 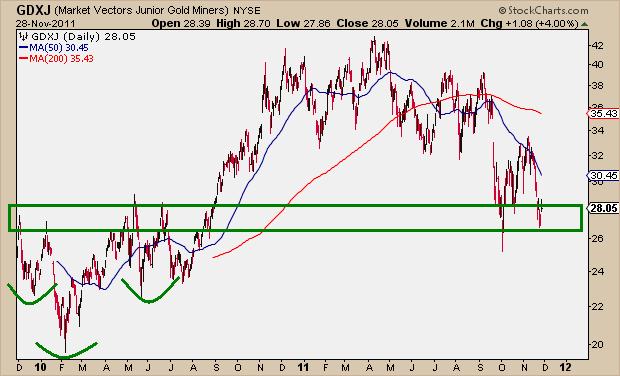 I think that it makes some sense to be looking at the Junior Miners here. Take a look at the breakout from that ‘Head & Shoulders’ looking pattern last summer. That neckline area that was Resistance then, is acting as some support on this test. In addition, the risk/reward here isn’t too bad either. With last week’s sell-off and then yesterday’s bounce, it appears that $GDXJ is trying to put in a ‘higher low’. From a risk management perspective, if the Junior Miners take out October’s lows, then all bets should temporarily be off. 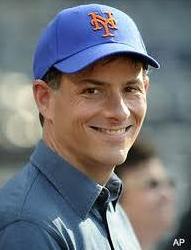 News is out that David Einhorn is placing bets on Gold Mining companies outperforming bullion going forward. On yesterday’s conference call regarding Greenlight Capital’s returns, Einhorn said that, “A substantial disconnect has developed between the price of gold and the mining companies. With gold at today’s price, the mining companies have the potential to generate double-digit free cash flow returns and offer attractive risk-adjusted returns even if gold does not advance further,” Einhorn said. “Since we believe gold will continue to rise, we expect gold stocks to do even better.” 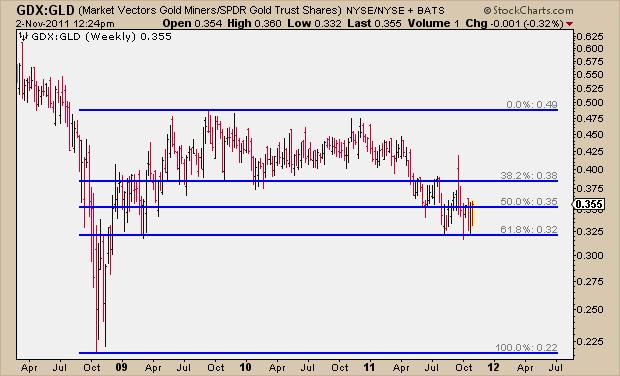 Here we are using $GDX to represent the Gold Miners and $GLD to represent Bullion. I think this ratio really tells the story. The chart takes us back to the lows 3 years ago up to the highs 2 years ago. Recently, this ratio successfully tested support around the 61.8% Fibonacci retracement of that original move off the Fall 2008 lows.

If Einhorn is right, support holds and the lows in the ratio are already in place. I happen to agree with his thesis here for the simple fact that this is an easy risk/reward opportunity. Long $GDX and Short $GLD gives you the exposure to this trade. If new lows are made and that retracement level is broken, then all bets are off.

If you don’t want to short $GLD, you can probably own $GDX or pick a few of its components. If you want to add some higher beta names to your portfolio, take a look at the $GDXJ holdings.

Look at Newmont Mining ($NEM) making new highs in price and breaking out of a downtrend relative to $GLD: 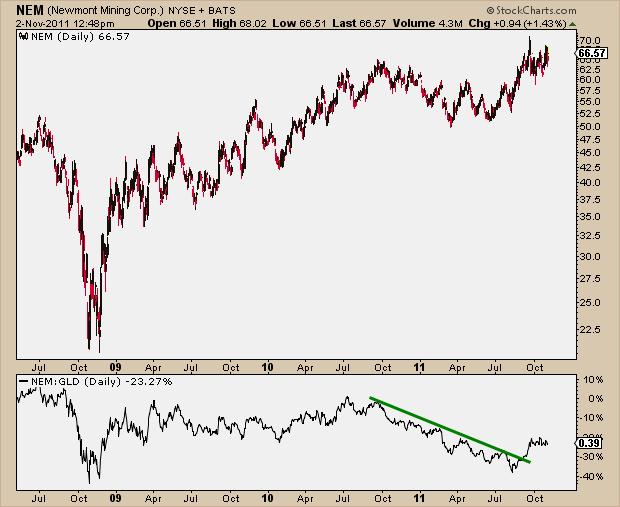 Barrick Gold ($ABX) is seeing some similar action in price, but isn’t doing anything too exciting vs Gold itself. I’ll be keeping an eye on that particular ratio and see what comes out of this: 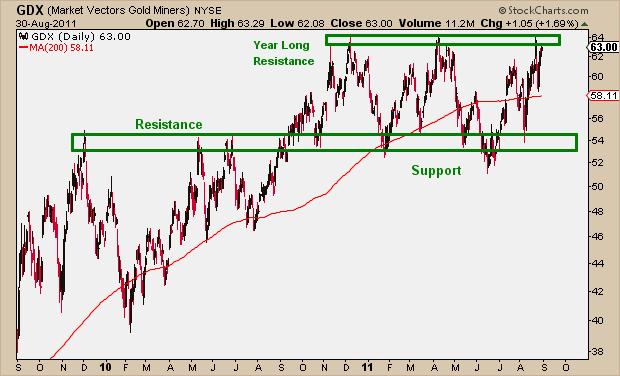 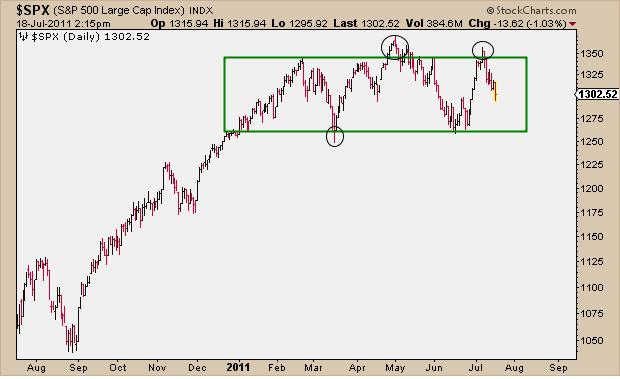 The S&P500 has been stuck in this range all year. At times, it has appeared to be on the brink of a breakout. Other times, it has felt as though a major breakdown was on the horizon. Neither one has occurred. Each attempt to break out of this range has led to a major reversal in the opposite direction (whipsaws are circled in the chart above).

CNBC – “Uncertainty has not gone away over the weekend,” said Ryan Detrick, senior technical analyst at Schaeffer’s Investment Research. “The markets are focusing on headline news again, and earnings have taken a backseat to what’s been going on.” Detrick said he expects the S&P to continue trading in the current range.

My opinion is that 1260-1345 will continue to be the key support & resistance levels until proven otherwise. Anything below or above that has turned out to be a whipsaw this year. Although this sideways trading range can be a little frustrating, there have been some great opportunities along the way in specific sectors and individual issues. Most recently, anything in the Precious Metals space has been on fire ($GDX, $GDXJ, $GLD, $SLV). For the overall market, this base building could be a blessing in disguise for the long run.

As the saying goes – The Bigger the Base – The Higher in Space! 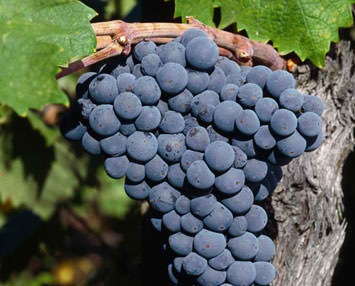 I’m in Northern California this week taking care of some business. Since I’m out here, I’m trying my best to enjoy some of the best “fruit” that the area has to offer. Meanwhile, here is what I’m reading this morning:

Call Me When the S&P Hits 1600 (ChartsAndCoffee)

The Number on Everyone’s Tongue is 1250 (ReformedBroker)

Jesse Livermore and Living to Fight another Day (chessNwine)

Scott Redler: The Market is Very Oversold at these Levels, and a relief Bounce Would seem Likely at some point in the near Future (Minyanville)

Which Treasury ETF is Right for Your Personality (DragonflyCapital)