END_OF_DOCUMENT_TOKEN_TO_BE_REPLACED

This week I was running up and down the east coast in meetings and conferences. With some of the free time I had left, I sat down with a few of my favorite financial journalists to rap about the markets. On Monday afternoon I was on Bloomberg TV and Tuesday I was on the Business News Network with Frances Horodelski. I don’t have as much time to do TV like I used to in the past, so it was a fun experience for sure.

Here is the BNN interview in full: END_OF_DOCUMENT_TOKEN_TO_BE_REPLACED

Precious metals are a sensitive subject in some circles. Discussions about gold or silver tend to bring out more anger and craziness than other assets. As someone who couldn’t care less about what we’re trading, Gold, Apple, Bonds, Australian Dollars or Go Pro, to me it’s just letters and math. I find it kind of funny when people get extra sensitive about a specific asset. Precious metals bring out some of the most hilarious commentary.

Today, I want to break down Gold and Precious Metals from many different angles in order to put it into context from both a structural perspective and a shorter-term tactical outlook. END_OF_DOCUMENT_TOKEN_TO_BE_REPLACED

Thursday morning I was invited on to the Benzinga pre-market radio show. We discussed shares of $AAPL, Semi-conductors, Crude Oil, Natural Gas and Gold. We also spend some time discussing execution and risk management strategies.

Precious metals have been the big story lately as Silver crashes to 4-year lows and almost anything with the word “Gold” in it continues to struggle and underperform other equities. Today I want to take a look at the S&P500 compared to the Gold Miners since they are right near historic levels.

Here is a daily line chart showing the ratio between SPY and GDX since last summer. We are literally right at the all-time highs in this particular ratio (note: the ETF GDX has only existed since 2006): 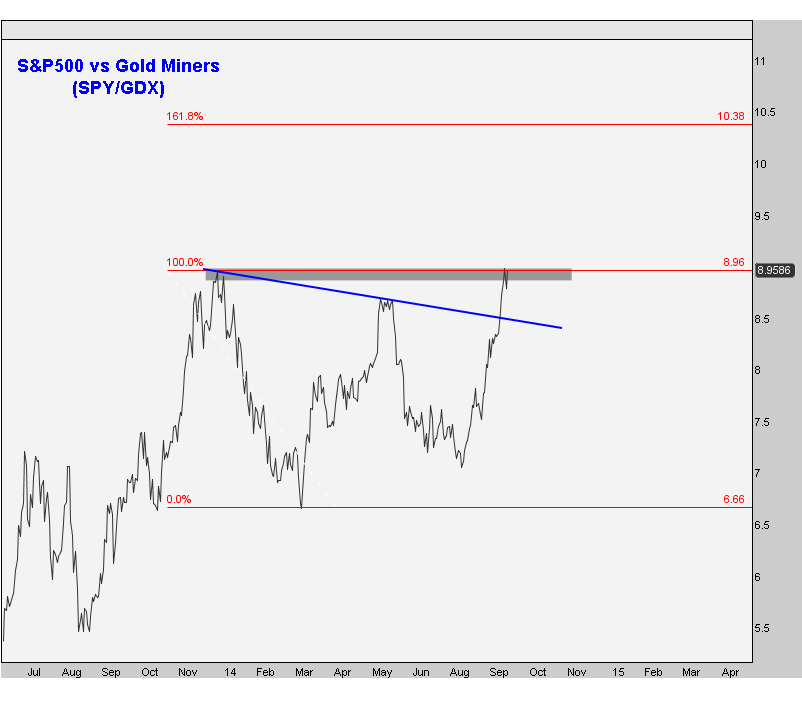 A break of this key resistance would give us a measured move target up near 10.38 which is almost 16% from current levels. We’ve already broken the down trend line from last December’s highs in the ratio. But a breakout to new highs, which looks likely would be another bullish development.

I can see a scenario where we continue to consolidate up here and then break out, or even correct a little bit to the downside in order to properly acknowledge this former overhead supply. But a confirmed breakout here would be extremely constructive, and from where we stand today, the higher probability outcome.

Members of Eagle Bay Solutions receive updates to this chart and over 50 others on a weekly basis. Make sure you take advantage of our New Launch Special Offer

After getting the year started right, Gold miners are digesting their gains in a very healthy way. Coming into the week, the Market Vectors Gold Miners ETF $GDX is up 23% for 2014. The Junior Gold Miners ETF $GDXJ is up 36% this year. We’re talking about just a couple of months here folks. Meanwhile, the S&P500 is up a percent or so for the year. Can you say Alpha?

It’s funny because coming into 2014 I was reading blog post after blog post hating on the performance of Gold. It’s sentiment like this that sparks rallies with these kinds of returns. Remember that.

So going forward, can the gold miners continue this move? I think so. The majority of this year’s gains came over the first 5-6 weeks of 2014. Since then, they’ve been consolidating those gains in a very healthy pattern. Some might call this a flag, some call it a pennant, triangle, etc. Truthfully it doesn’t matter what you call it, it’s the implications that really matter.

Here is a daily candlestick chart of $GDX. Look how well prices are consolidating: 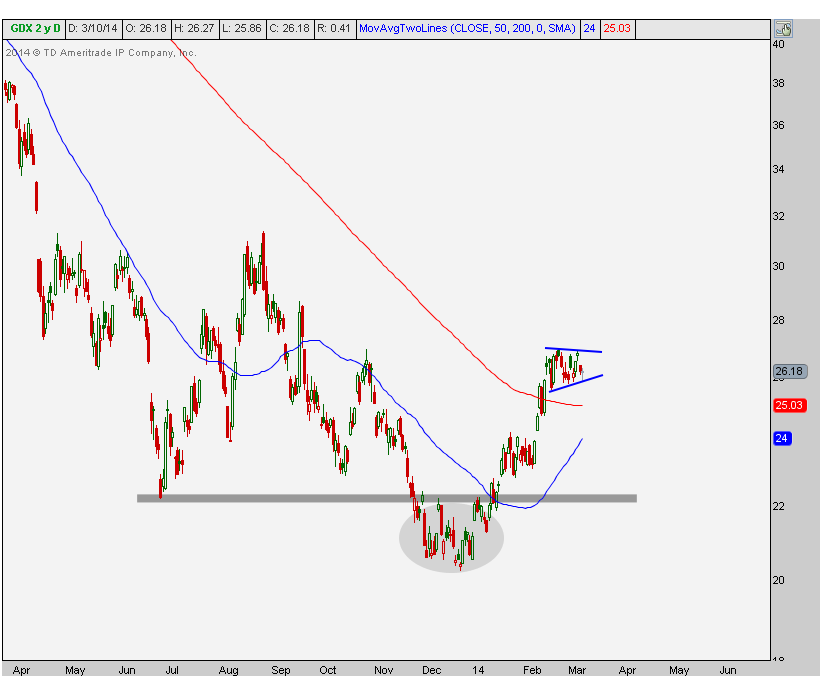 This has allowed the 200 day moving average to flatten out and allowed the 50-day to catch up as well.

Take a look at the weekly chart. Look at the nice bullish divergence in momentum. When prices made new lows in December, the relative strength index was already putting in a higher low and failed to reach any oversold conditions. This was a very positive development. 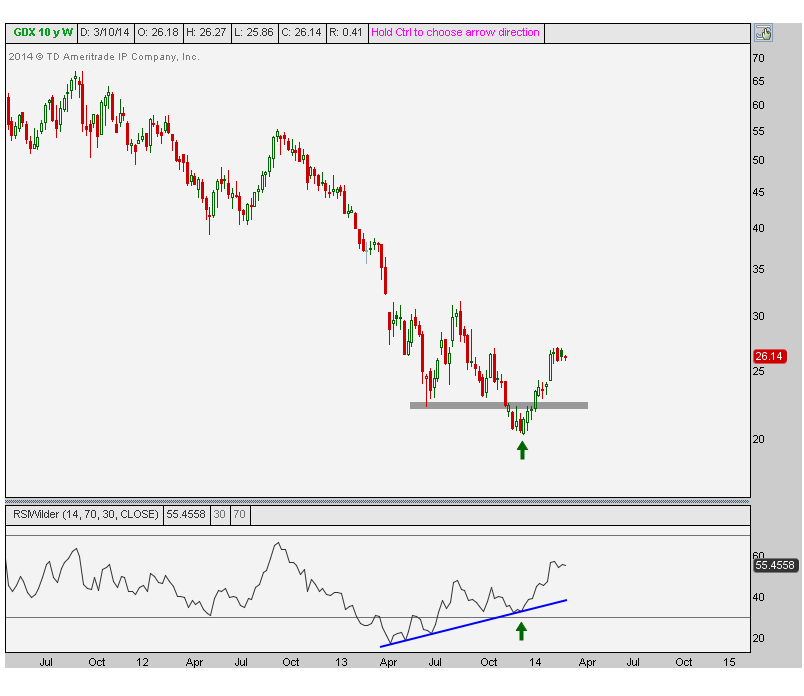 Bullish divergences like this combined with that extreme bearish sentiment mentioned before create violent moves like the one we just saw. After the initial run and healthy consolidation, I expect this uptrend to continue.

Here is a closer look at this consolidation where we can take a breakout above the upper end of the range as a signal that the uptrend has resumed. The Junior miners look the same, just with higher beta. Here are the 65-minute timeframes: 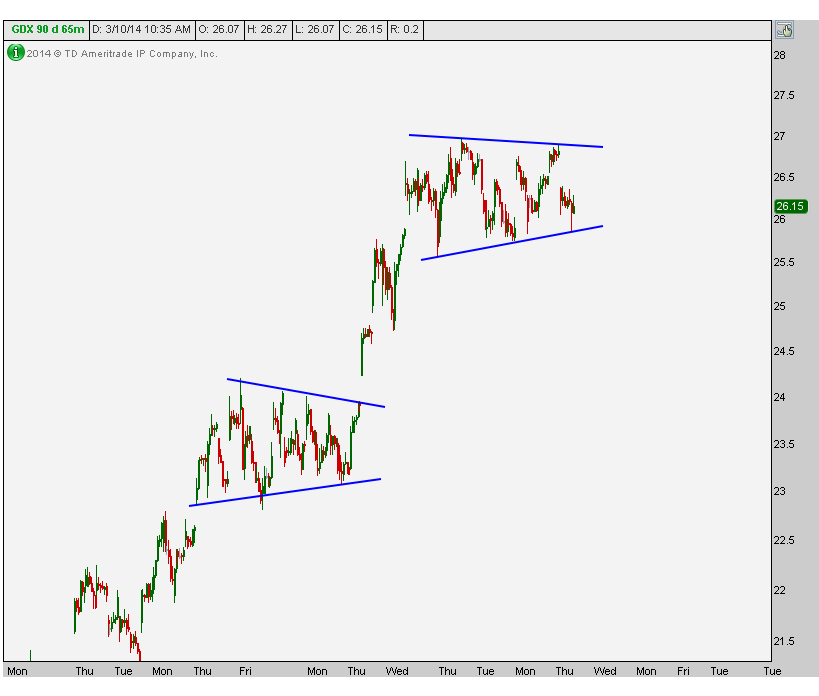 So far so good in the Gold Miners space. A breakout from this bull flag would be extremely positive. A gap higher out of this pattern would be even more bullish.