The first month of the 3rd quarter and 2nd half of the year is now in the books. So what happened?

Well, the S&P500 rallied over 5%, Treasury Bonds lost some more ground with the long end down 2.5%, commodities did well with Gold up 7.4% and Crude Oil up 9.3%, but emerging markets lagged once again up just 1.3% for the month. Here in the United States, defense led the way once again as the did in the first quarter.

Here is a chart of the S&P Sectors relative to the S&P500. Look how well healthcare did this month, with Utilities right behind them and Technology lagging the group: 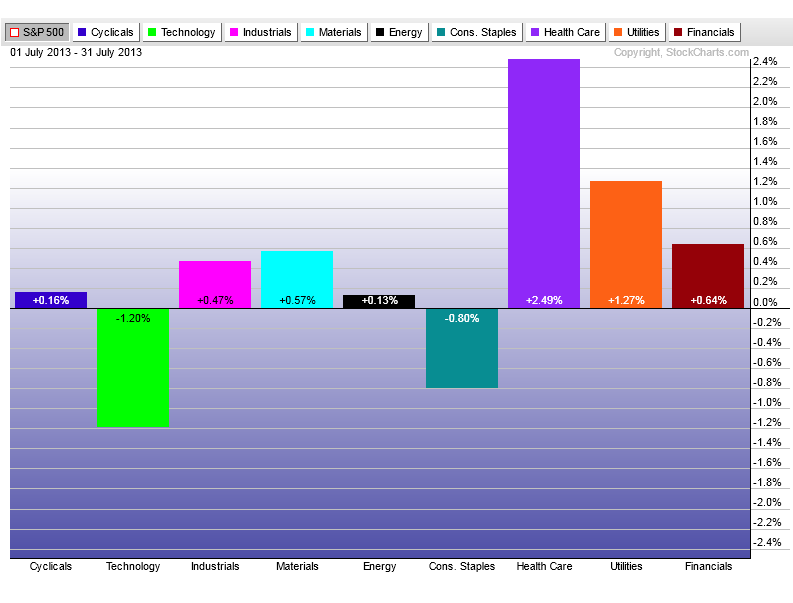 Looking around the globe, it was Europe who led the way this month up 7.8%. Canada finally bounced back nicely with commodities doing well in July. Out in the Pacific, pretty much everything outside of Japan bounced back nicely. And Latin America once again had a down month: 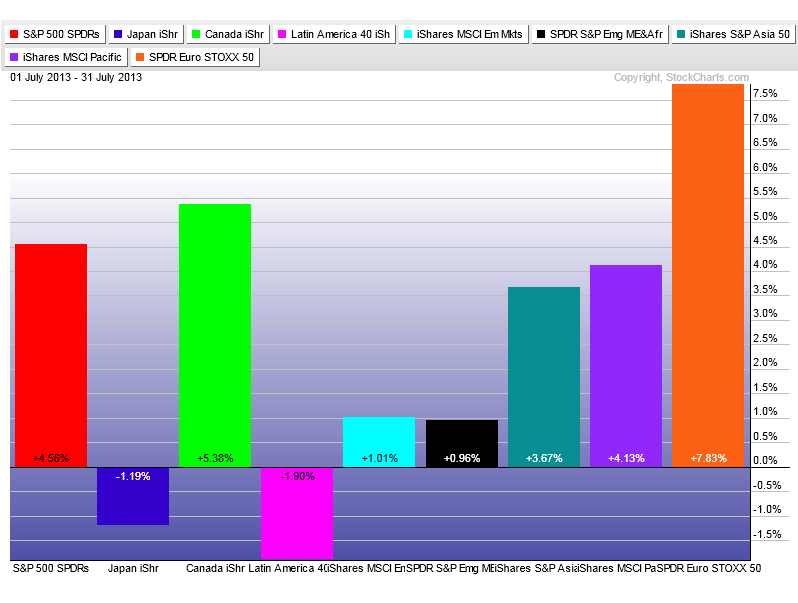 So what’s in store for August? What sectors are going to lead the way? Which ones will struggle? Which asset classes will money flow into as we finish up the summer and get ready for the big leagues in Septemeber?

These are the questions that I think about constantly. What are you guys thinking about?

We just finished up with another down week for the S&P500. That makes 3 out of the last 4, which hasn’t happened since November. The 20 day moving average hasn’t been declining this long since November either. So we’re seeing some new things for sure. But no confirmed breaks just yet.

Dr. Phil and I recorded our weekly chat and discussed those levels we’re watching in S&Ps. But also the big break down in China this week, Crude Oil’s potential breakout as well as the possibility of another leg down in gold miners. Check it out:

Talk about a frustrating asset class. I don’t think anyone is happy and comfortable being in the oil space, bulls or bears. While the S&P500 has rallied to all-time highs off those lows 4 years ago, crude oil has frustratingly traded sideways this whole time.

Today let’s focus on $USO – the United States Oil Fund ETF. Since May of 2009, this oil fund has traded within a 16 point range between 29 and 45. Right now, they’re sitting somewhere in the middle around 34.50. The chart interests me for sure, but can this turn into a real breakout?

USO has built a nice symmetrical triangle since last summer: lower highs only to be met with higher lows. In April, oil prices fell below the lower trendline of the pattern, only to quickly reverse higher. That is signal #1 to us that prices aren’t ready to collapse. From false moves typically come fast moves in the opposite direction. So as far as we’re concerned, if that break was indeed a false move, then the fast move should theoretically be to the upside. 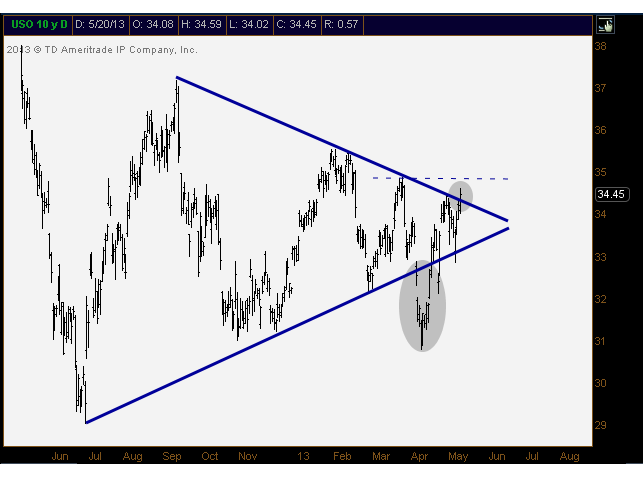 To start the new week $USO broke above a declining trendline from the September highs. This is the first time it’s been able to do that. Now we want to see a series of higher highs to go along with the higher lows. That confirmation level to us would be closes above those early April highs.

As far as price targets go, the base of this triangle is about 8 points. If this breakout above 34 and change holds, then you’re looking at a measured move up above 42. This level also coincides with the highs from March of last year. So this resistance level would definitely be our target after confirmation.

But knowing the way this guy trades, I wouldn’t be surprised to see it whip around a little bit before making trending decisions. I guess we’ll see. Either way, I think it’s interesting that the Energy sector (as represented by $XLE) is breaking out to new 52-week highs as Oil potentially breaks out in its own right. Although their correlations aren’t as consistently high as you may think (0.49 for year), they do have a correlation of almost 1 for the past quarter. This could continue…

I went down to the Nasdaq this morning to talk stocks, bonds and commodities on Business News Network. Check it out:

Technical Tuesday: A Take on the Trade (BNN)

The Oil to Natural Gas ratio is still crashing. And maybe crashing is a harsh word, but I really don’t know what else to call it. If we were talking about the S&P500, it’s all you would hear about. But it’s one energy source relative to another, so it’s not sexy. But price is price right? At the end of the day, who cares what it is, as long as it’s liquid and we can trade it.

This particular pair was one that we discussed ad nauseum last year. Remember the good ol’ days when Oil/NatGas was up above 50:1??? At the time, people were acting like that was normal. You know, something that typically ranges around 10:1, now chilling up above 50:1. That was such a beautiful bubble that popped last year, and it’s still getting crushed.

Here is an updated chart of the pair. 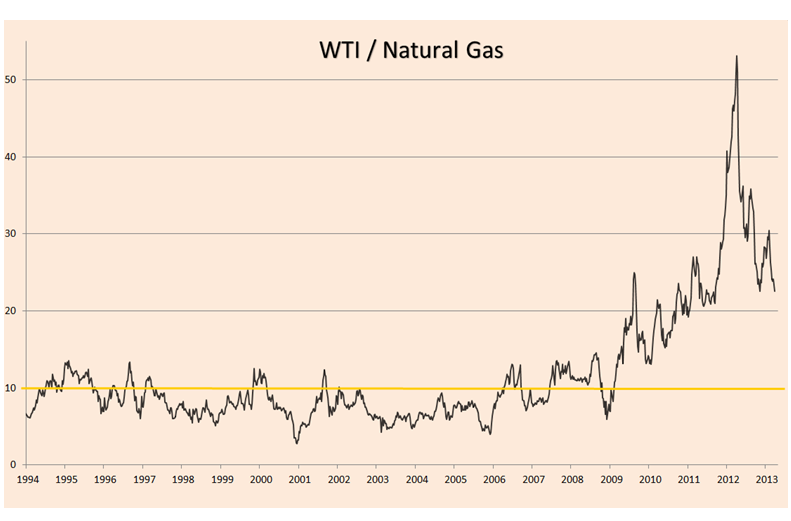 I’m out in California giving a presentation and was looking through some of my favorite charts. And this one has to be up there. So I was wondering why I hadn’t posted any updates on this lately. Here it is. Looks to me like it’s still going lower. Crude Oil seems to be on the verge of a breakdown while Natural Gas keeps on trucking to new highs. So the absolutes make sense. But the pair….the pair is the one. That historic mean down near 10 is calling my name. Can you hear it?

Trading floors don’t exist anymore. I don’t care what you see on TV. I’ve been to all of them and there’s no one there. The few people left are playing on their iPhones showing others how funny their recent tweet was or watching youtube videos about leprechauns. There’s no such thing as looking at your competition in the eye to see what’s going on. The camaraderie that comes along with hanging out with traders all day is also lost. The joking around and trading idea sharing is history.

That’s where Stocktwits comes in. The new trading floor, if you will. You can filter to see just who and what you want. And if you don’t like something or someone, ignoring is made simple. There’s no “block” button in real life unfortunately, but very easy to do on Stocktwits. Over the years I’ve met some brilliant and very cool people on the stream that I’ve later hung out with in the real world. It’s pretty awesome.

Thursday was a busy one for me. Much more tweet-filled than usual I think. So rather than writing a post about something I’m seeing out there, here’s a summary of what we were discussing throughout the day: 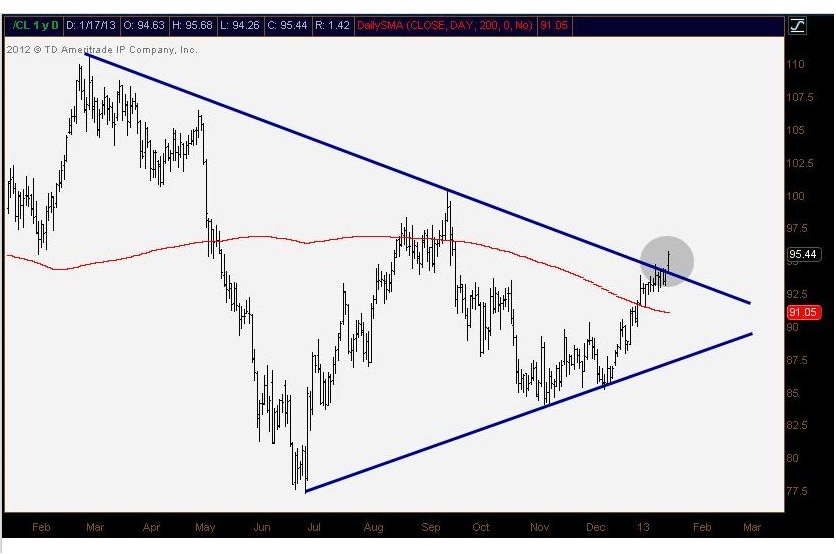 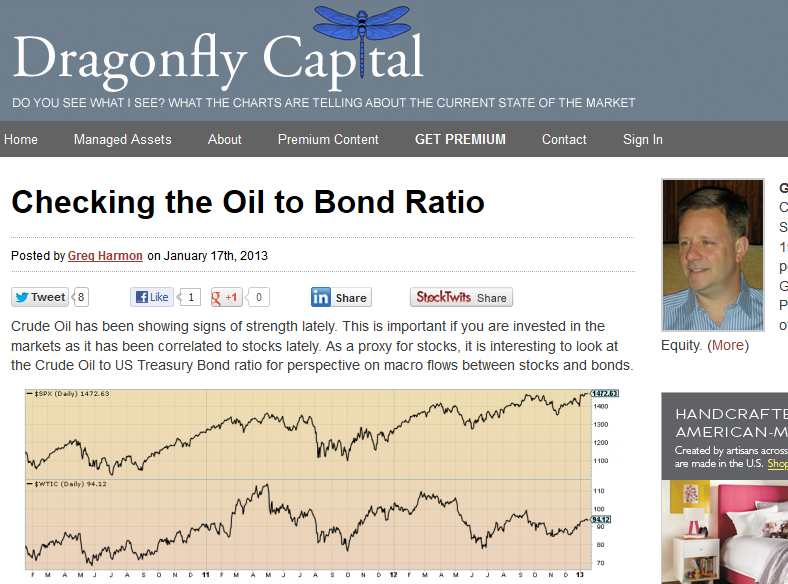 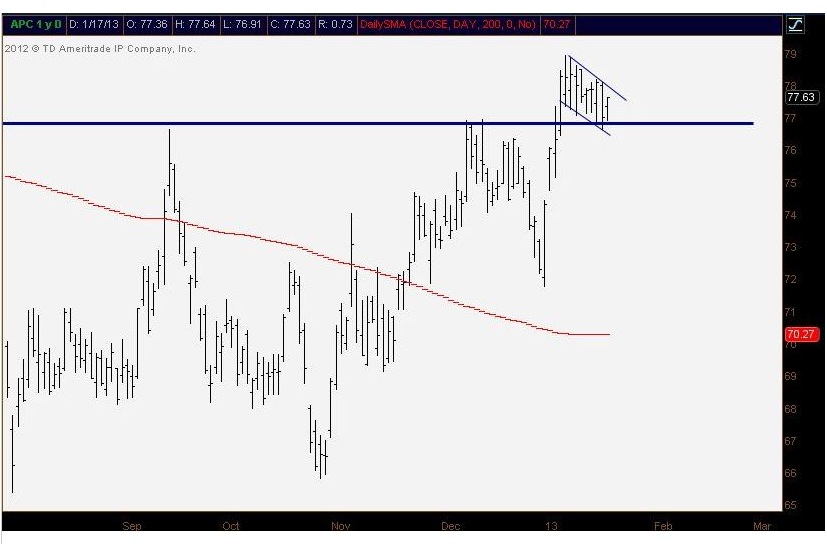 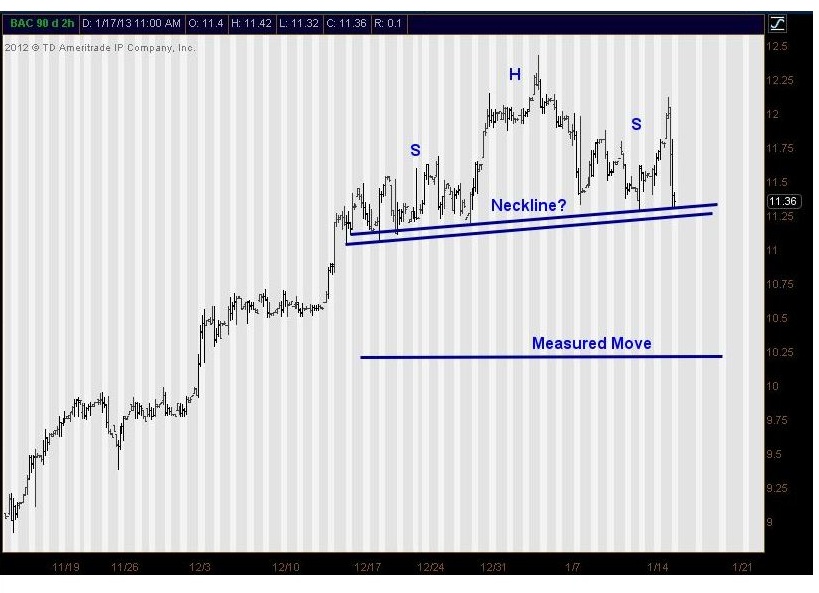 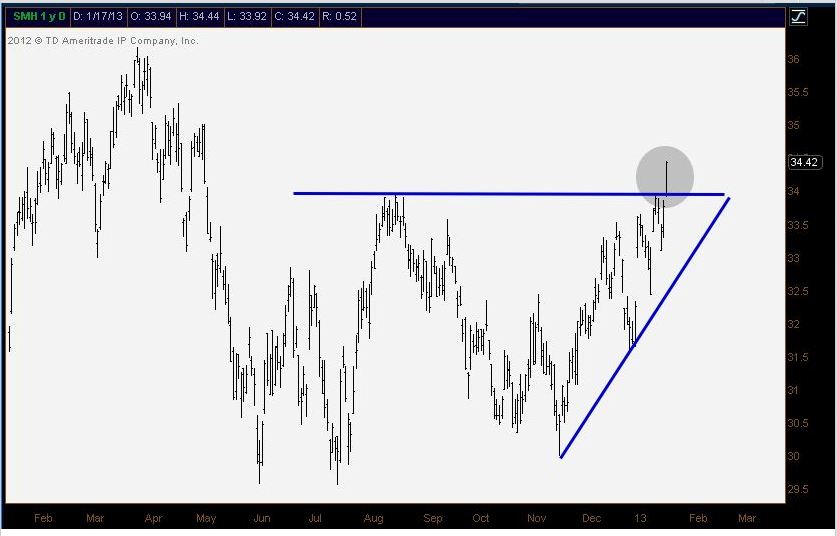 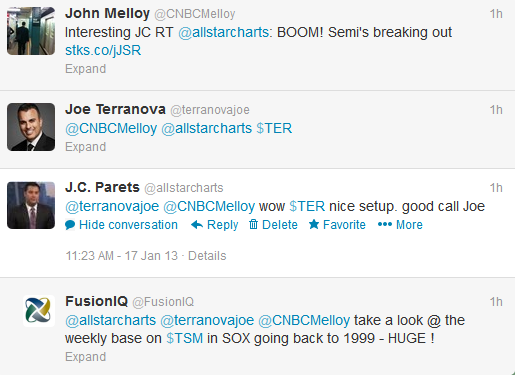 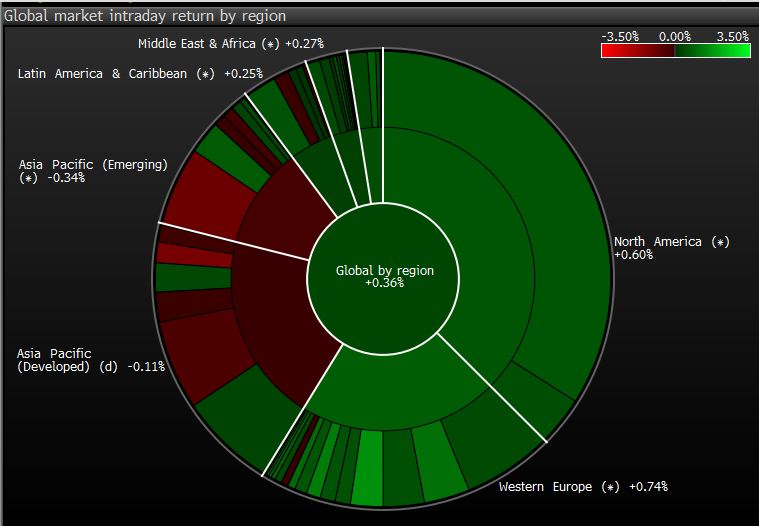 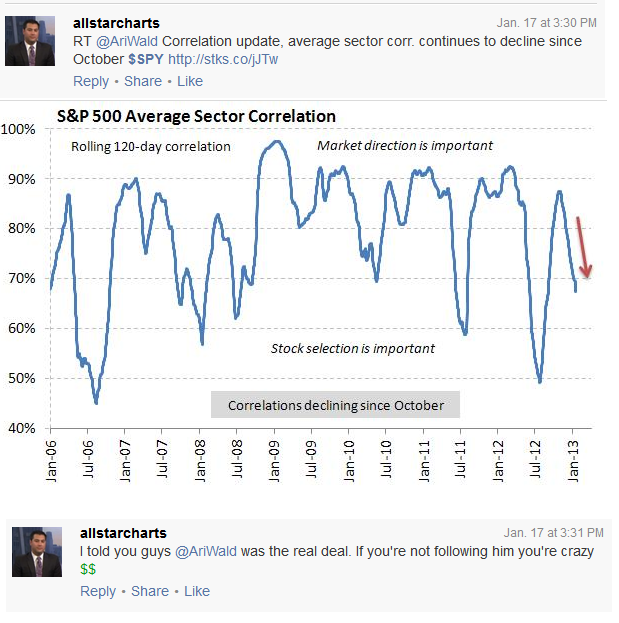 Another one in the books…