Fibonacci Analysis is one of the most valuable and easy to use tools that we have as market participants. I’ve studied supply and demand behavior for over 15 years and I find myself using Fibonacci tools every single day. These tools can be applied to all timeframes, not just short-term but longer-term. In fact, contrary to popular belief, technical analysis is more useful and much more reliable the longer your time horizon. Fibonacci is no different. Here is the S&P500 going back to the peak in 2007. After breaking out in 2013, the market stopped at exactly the 161.8% extension of that entire 2007-2009 decline. That wasn’t a coincidence. I’ll do my best to explain why throughout this page. 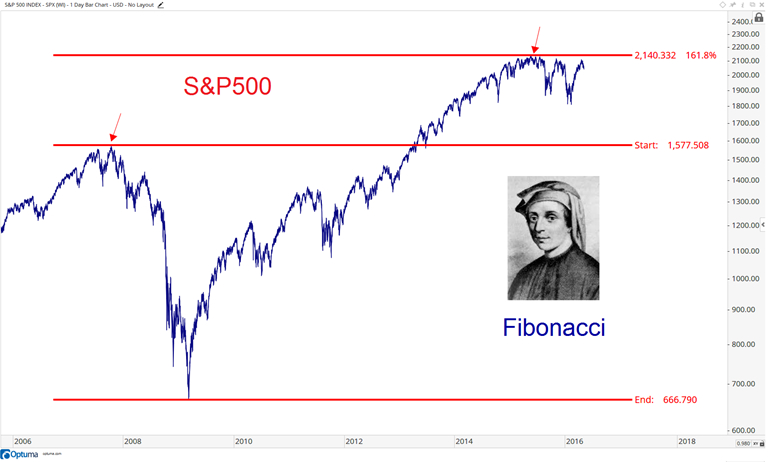 Many of Them Hate Fibonacci

First of all, let’s discuss the “stigma” that surrounds Fibonacci analysis. The academic community hates it and I think the fundamental guys hate it even more. The funny part is when markets are crashing, they’re the first ones calling us technicians asking which are the next levels to watch. We hold our heads up high and just tell them, and let them keep convincing themselves they don’t need to analyze price behavior. It’s their loss, not ours.

Media-wise, they definitely hate it. On two separate occasions, on two different TV networks, I’ve been told my the producer a couple of minutes before going on live that, “We don’t use words like Fibonacci around here, so please do not mention that”. I kid you not.

Here I am on Bloomberg TV explaining to the lovely Trish Regan that our downside targets in Blackberry are based on off of key Fibonacci Extensions: 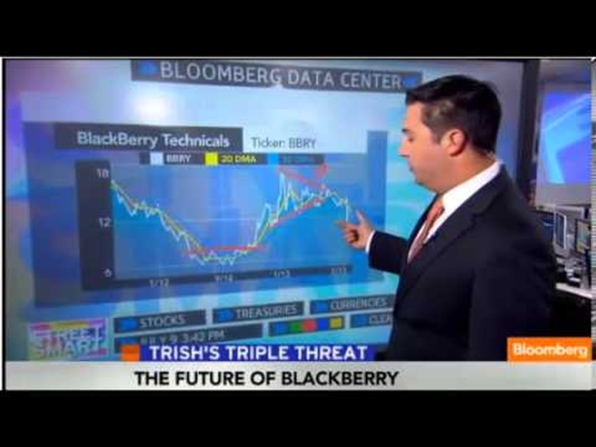 If you are not concerned with the math behind the tool, skip down to Execution.

We first see Fibonacci in Indian mathematics and is attributed in part due to work done in 200 BC by mathematician and author Pingala. We don’t know much about the author, but outside of India, the Fibonacci sequence first appeared in Liber Abacci in the year 1202, a book on arithmetic written by Leonardo of Pisa. We know him today as Leonardo Fibonacci. There is a statue of the original Big L in Pisa, Italy. It’s hard to find, but I explain how to locate the statue here for future math nerds on vacation.

In his book, Liber Abaci, Leo the Hero introduces the Fibonacci sequence to Europe and posed the following problem:

Fibonacci imagines a biologically unrealistic scenario for the growth of a population.

How many pairs of rabbits placed in an enclosed area can be produced in a single year from one pair of rabbits if each pair gives birth to a new pair each month starting with the second month?

The amount of Rabbits increasing as months pass by is the Fibonacci sequence. What we know is that each pair including the first pair needs 1 month to mature. Once the pair of rabbits are in production, they birth a new pair each month. Since they need a month to mature before, the number of pairs is the same at the beginning of the first and second months. That’s why the Fibonacci Sequence starts with 1,1.

In the second month, the first pair doubles so the sequence expands to 1,1,2. 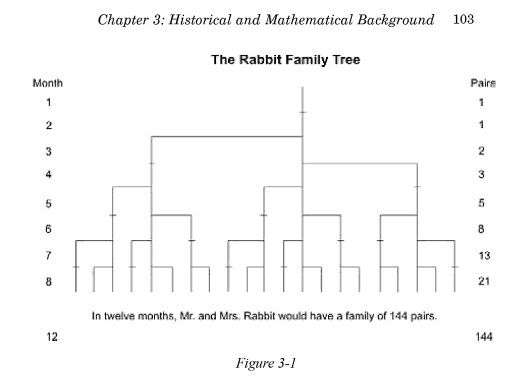 Moving on, the oldest pair now gives birth to a 3rd pair so to begin the 4th month, there are now 3 pairs. The Sequence is now 1,1,2,3

But it’s not the answer to the problem that is brilliant. What we want to focus on is the way in which we arrived at the solution. You see, if you add up any two adjacent numbers in the sequence you’ll arrive at the next number in the sequence. 1 plus 1 equals 2. 1 plus 2 equals 3. 2 plus 3 equals 5. 3 plus 5 equals 8 and it goes on and on….

There are two simple ways that these Fibonacci numbers can be used. Retracements, which are for counter-trend purposes, and Extensions which are used for ongoing trends. Both can be very helpful in downtrends as well as uptrends. I find Fibonacci analysis more helpful in long-term uptrends. Even if you’re a shorter-term trader, Fibonacci analysis done on your short-term time horizon is going to be more beneficial, in my experience, if it is in an asset that historically has gone up over time. To the downside, I would argue that the longer-term downside extensions rarely work. But in the shorter-term extensions absolutely do. We’ll get into the dynamics of it now, but I wanted to preface with that so you have that context as we move forward.

For retracements, we’re looking for the end or at least a temporary pause after a counter-trend market move. In other words, we’re trying to find a target for a sell-off within a larger uptrend, or an end to a rally within a larger downtrend. Here is an example of the 61.8% retracement coming into play within an ongoing downtrend. This level represents approximately 61.8% of the entire decline, peak to trough: 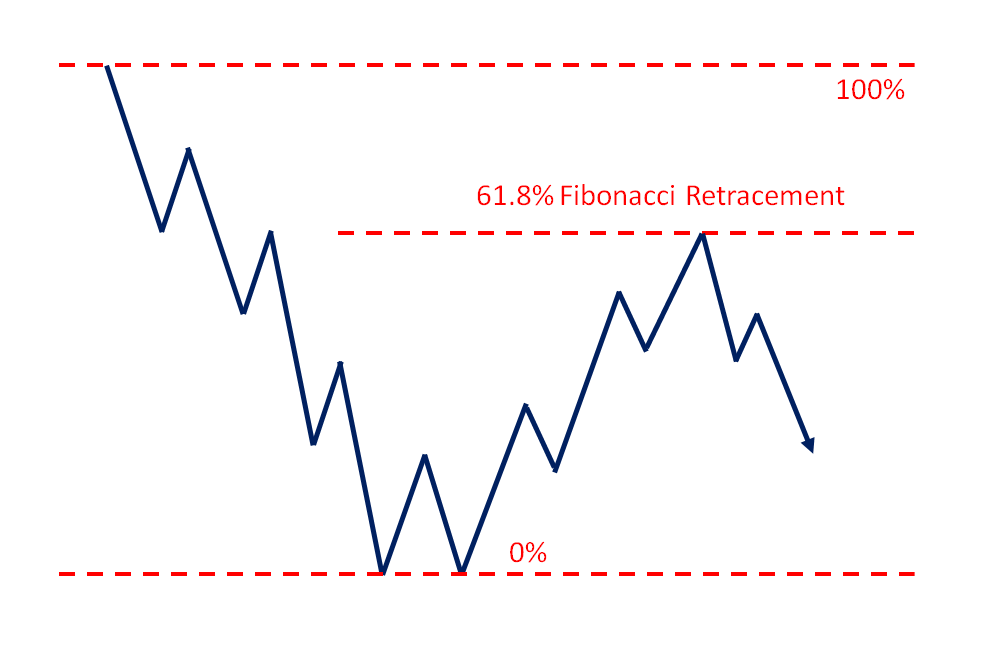 These Fibonacci levels can be used to calculate targets regardless of the asset class. We can be looking at U.S. stocks or sector ETFs, Indexes like the S&P500, Futures Markets, Currencies, etc etc. Also, remember that the market is fractal. These levels often come into play on longer-term weekly timeframes, intermediate-term daily timeframes, and even intraday.

NOTE: When I draw these lines, I don’t calculate the exact low to the penny or exact high to the penny. Some software providers do that for you automatically but others don’t. It doesn’t matter either way. We just want to get very close. With Fibonacci, or with support and resistance and even trendlines, we want to draw these levels with crayons, not sharpened pencils. So you’ll never see my Fibonacci extensions match up to the penny. My time is better spent doing other things. Besides, the market doesn’t react to the penny either, it respects the areas. That’s the point of this. Think of supply and demand like a mattress, with a little bit of give.

Here is a chart of Power Grid Corp. Of India from 2008-2016. The stock crashed in 2008-2009 and began consolidating its counter-trend move right at the 61.8% retracement of that entire decline. That level acted as resistance in 2009 and 2012 before being broken to the upside in 2014. Notice how a year after that breakout, the same level acted as support. Polarity at work. 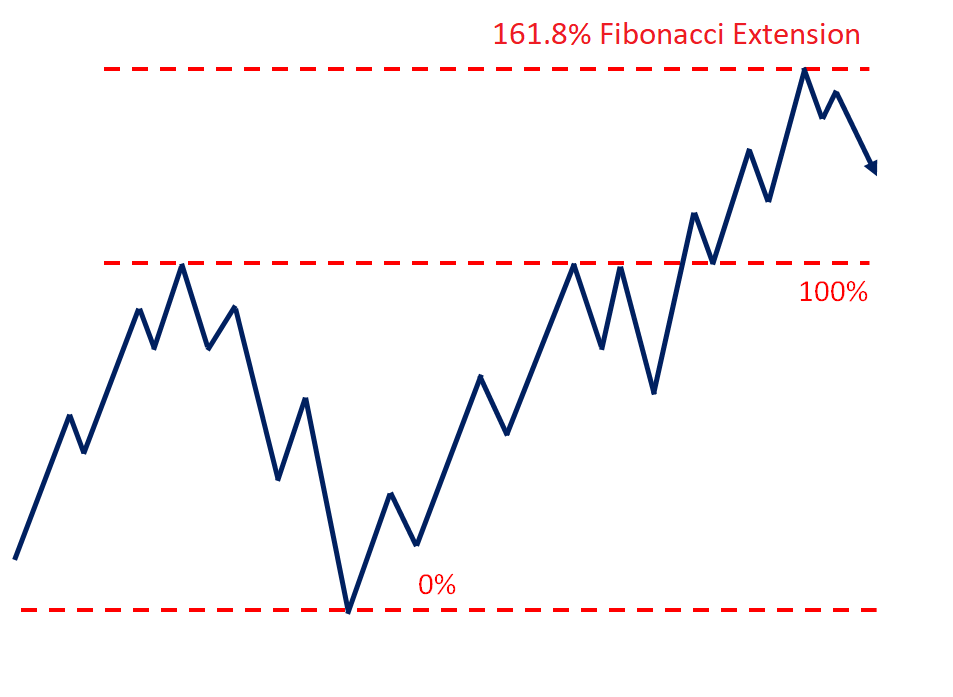 Here’s Aurobindo Pharma giving us a great example of 161.8% extensions acting as resistance. The stock consolidated in a wide range from 2000-2010, so we took the 161.8% extension of that base and used it as our price objective once prices broke out in 2010. Shortly after the breakout, prices approached that level, tried for many weeks to get through, but failed and crashed from there.

Here is Infosys Ltd. getting up to the 161.8% extension of its 2016-2017 decline and being rejected not once, but twice! This doesn’t just happen by coincidence.

The same can be seen to the downside during downtrends. Here we’re looking at Mahindra Logistics Ltd., which was in a long-term downtrend and in early 2019 completed a counter-trend rally. Once prices broke the lows they set in February, we took the 161.8% extension of its February-April counter-trend rally and used that as our downside price objective. A few weeks later, prices tested that level and reversed sharply.

Here is a good example of Zee Entertainment hitting the 261.8% extension of its 2006-2009 decline and immediately stopping. It took 8 months of consolidation at that level before it was able to get through this level of resistance. Also, notice how that level acted as support once prices got above it and began to trend higher again.

Here is an example of Titan Company Ltd. breaking out in early 2017 above former resistance from the 2015 highs. Upon this breakout, our Fibonacci analysis gives a target just around 545 based on the high in 2015 and low in 2016. The market respected that level, consolidated, and then break out again above the 161.8% extension. This is normal for a strong uptrend. This level now becomes support with our next target near 700, which of course is based on the 261.8% extension of the 2015-2016 correction. The thought process after the breakout above 545 is that we only want to be long if we’re above that. Below that level and things get hairy.

Here is Tata Steel in 2005 running into the 161.8% extension of its correction a year earlier. Sometimes you’ll even see a slight overshoots like this that are only temporary.

Notice how the slope of the trend accelerated once the stock was finally able to get through the 161.8% extension. We can see a similar phenomenon in Nestle India Ltd. As you can see below, prices stalled in August 2018 near the 261.8% extension of its 2015-2016 decline. After some consolidation, once prices were able to break out again, things really started moving fast. This should be expected. It took a full year for prices to work through the overhead supply at that 261.8% extension, which is why when our price objectives are hit we take our profits and move on. It’s only when prices get above that level again that we can be long, otherwise, we have the massive opportunity cost of having our money in a stock that’s not moving…or worse, reversing its trend.

For larger trends, we can even go beyond the 261.8% extension, in which case the 423.6% extension comes into play. This is calculated by dividing each number by the number 3 spaces over to the left. The support and resistance principles mentioned above can also be applied here:

After that we can extend to the 685.4% extension by dividing each number by the one 4 spaces to the left:

And so on and so on:

Also, these Fibonacci levels are not just resistance within uptrends, but are often levels of support during corrections within these uptrends. Here is a good example of Bitcoin, where in most cases, these levels were not just resistance, but also became support on the kickback. ACC Limited is a good example of this. We have our Fibonacci levels up from its 2000 decline, which was the most important correction in this entire chart. Notice how the 161.8% extension didn’t so much turn into resistance but was actually important support. The exact same thing occurred with the 261.8% extension. The market can react to these important levels from both support and/or resistance.

Fibonacci needs to be used in conjunction with other tools. This isn’t some kind of holy grail. Fibonacci is only a supplement to price itself that we use in order to identify the direction of the primary trend. That’s all it is: a potential level of significance where buyers and sellers tend to gather. This example of Tyson above is a great one to add other indicators.

The moving average is used to help identify that the trend has been up and then the momentum indicator below also confirms this. So when prices are holding above a key Fibonacci extension, and momentum and the smoothing mechanism are confirming the uptrend in price, the more conviction we can have holding a long position against that level. In other words, we would keep stops below that extension level and/or only be long if we’re above it.

One thing I would like to reiterate is that only price pays. Supply and demand are based on support and resistance defined by prior levels where shares changed hands. Fibonacci, just like every tool outside of price, is only supplemental. Fibonacci works best when key levels coincide with former support or resistance. But again, all of this is just a supplement to price, just like volume, or momentum, or the use of smoothing mechanisms, or sentiment or seasonal studies. Only price pays, but Fibonacci certainly helps. In most cases, it helps a lot!