“The 200-day average is viewed as the line that best determines whether a market or stock is in a major uptrend or major downtrend,” – John Murphy,  chief technical analyst StockCharts.com.

After failing every day this week to close above the 200-day moving average, the S&P500 sold off all day Thursday. The futures looked promising for a hot second this morning, but rolled over to disappoint the bulls. On Monday, the large-cap index poked its head above 200 day Moving average intraday, only to close back below it. Same thing on Tuesday and same thing on Wednesday.

This key resistance level is the real deal. In late October, the S&P500 successfully closed above the average for two consecutive days, but then rolled over. Two weeks later, it managed to close above it for just a single day before rolling over again. 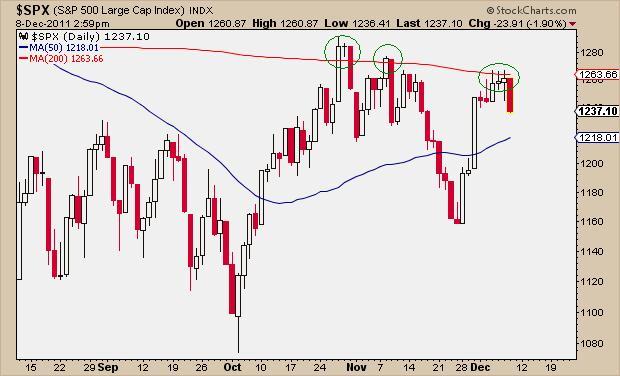