Another Technician was out with a bullish note on the S&P500 yesterday. Peter Beuttell, technical analyst at MTS Research Ltd., thinks that the initial rally off the October lows could repeat itself going into the end of the year. Yesterday Tom DeMark came out looking for a 1330-1340 by December 21st. Now Peter Beuttell comes out with a 1330 target by the end of the year.

The Standard & Poor’s 500 Index may jump 6.9 percent by the end of this month as the benchmark measure completes a year-end rally, according to Peter Beuttell, a technical analyst at MTS Research Ltd. in Bath, England.

“If you look around the world, certain indexes didn’t look like they recovered enough, so there is a chance that the initial rallies could repeat,” Beuttell said in a telephone interview today. “That supports the case for another rally pattern, which is under way now.”

“It’s seasonal for the market to rally,” Beuttell said. “The year-end rally began with the October low.”

The S&P500 is up 8-9% in a very short period of time. If support around 1235-1240 is broken to the downside, I would look for more risk down to around 1220. Anything below that would put this rally in jeopardy. On the bullish front, I would want to see consistent trading above 1265 as confirmation that we have another 6-7% to the upside. 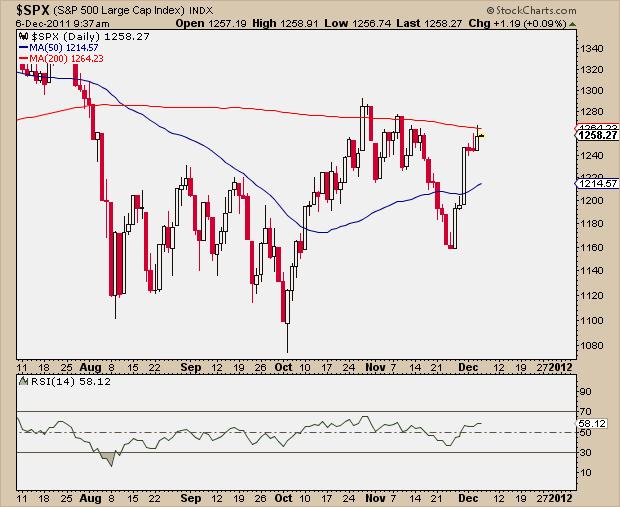 Peter Beuttell is a self-taught market technician with over 30 years’ experience in investment research.  He established independent global investment research provider, MTS Research, in 1989 after gaining a valuable insight into the approach and services required by institutional investors following eight years of using technical analysis as a pension fund manager