My friend James Bartelloni sent over this note today and said I could share it with you guys. He’s written a few guest posts in the past and made a nice call on the blog last year. In May Bartelloni sent over a chart comparing the parabolic move in $AAPL to previous bubbles: Nasdaq in 2000, Centex Homes in 2005, and Green Mountain Coffee in 2011. Boy was he right.

James Bartelloni is a U.S. Navy veteran and spent 12 years in the cockpit as a TOPGUN graduate in the F-14. Having graduated from the US Naval Academy with a BS in Mathematics, he later went on earn his CMT Designation. He sometimes uses a bit more of an unconventional approach to technical analysis and likes to call himself an ‘Intermarket Musician’.

Here is what he had to say today:

JC has discussed the importance of ratio analysis in this forum before….it’s a powerful, yet easy, way to make objective assertions of how a certain asset is doing against an another or against a broader index.  If the asset is going UP against the denominator it’s stronger.  If it’s going down, well, it’s weaker.  Period, dot, end of analysis.  As a professional Portfolio Manager I “try” (the operative word’) to understand how the “big boys” are positioning their portfolio’s in the context of the broader circle of life (fixed income/global equity/commodities/FX).  Yes, 1) the VIX has been pegged at historical lows (again), 2) the world is awash in a quadrillion (one thousand million million) dollars worth of debt 3) bullish sentiment is at higher levels than 2007 and 4) most of all the last standing bears (Custards Last Stand (?)) have thrown in the towel.  All that is great …. but when is V50 Capital going to deploy capital on the short side?  A very key ratio – Consumer Staples vs. the S&P (XLP/S&P) has given very nice indications of “major” highs and lows since 2000.  We are using this as a barometer and signal for potential future moves up or down 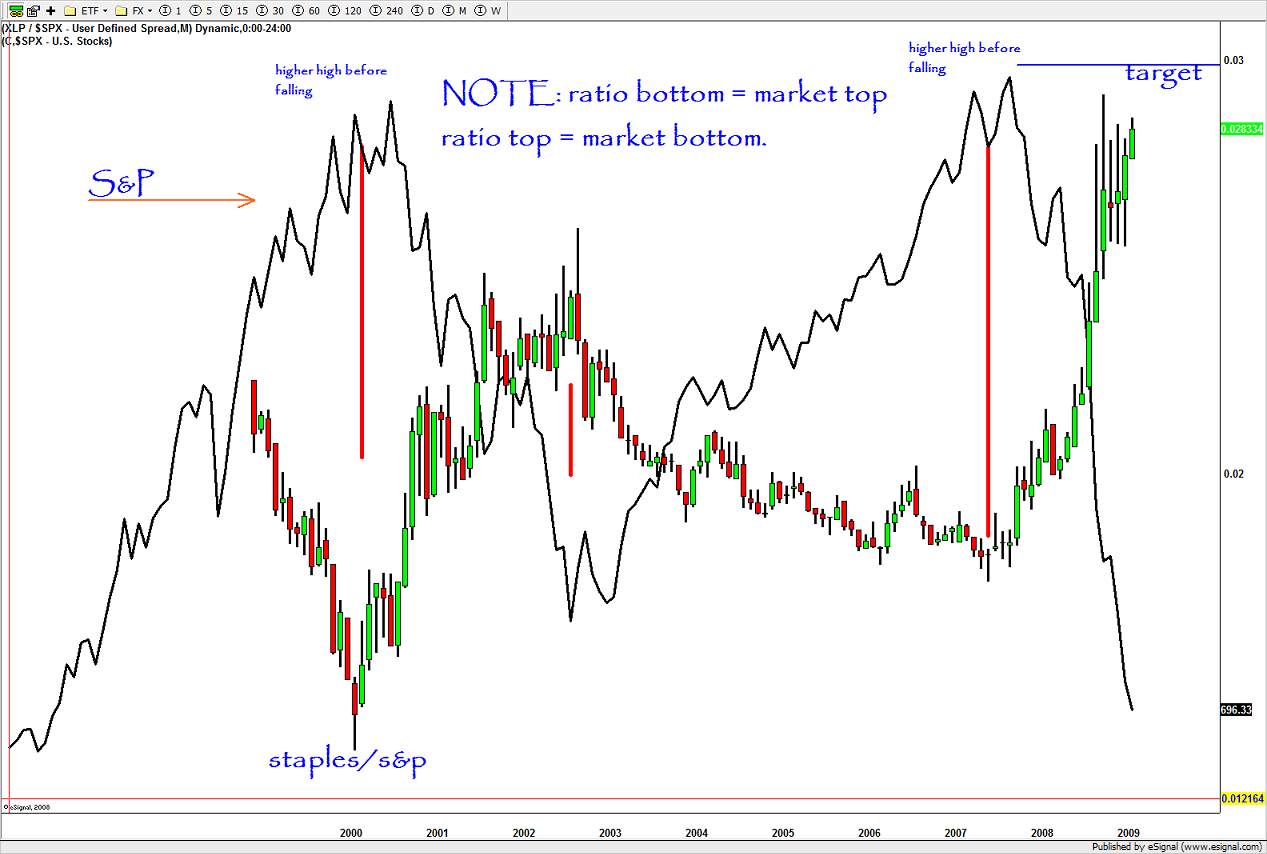 Our first chart is taken from March 2nd, 2009 (the market bottomed March 6, 2009) and was given to clients to alert them about the BUYing opportunity that might be present based on 1) the upper monthly basic trend channel providing resistance and/or a 2) basic target appearing.  Overlaid on top of the Consumer Staples/S&P was the S&P Index and a hypothesis was drawn that inflection points in the ratio were also major inflections in the S&P.  The macro thesis is that, in times of uncertainty/fear, institutions still need to be invested so they rotate to stocks that produce tangibles that are necessary to live.  With this increased visibility and investment the staples, broadly, start to outperform the overall S&P.  When the fear/uncertainty subside they rotate out into more “risk on” assets and the overall S&P starts to outperform.

As you can see in our second chart, the upper channel worked extremely well and, at the 2009 bottom, staples were outperformed and the ratio corrected (click chart to embiggen) 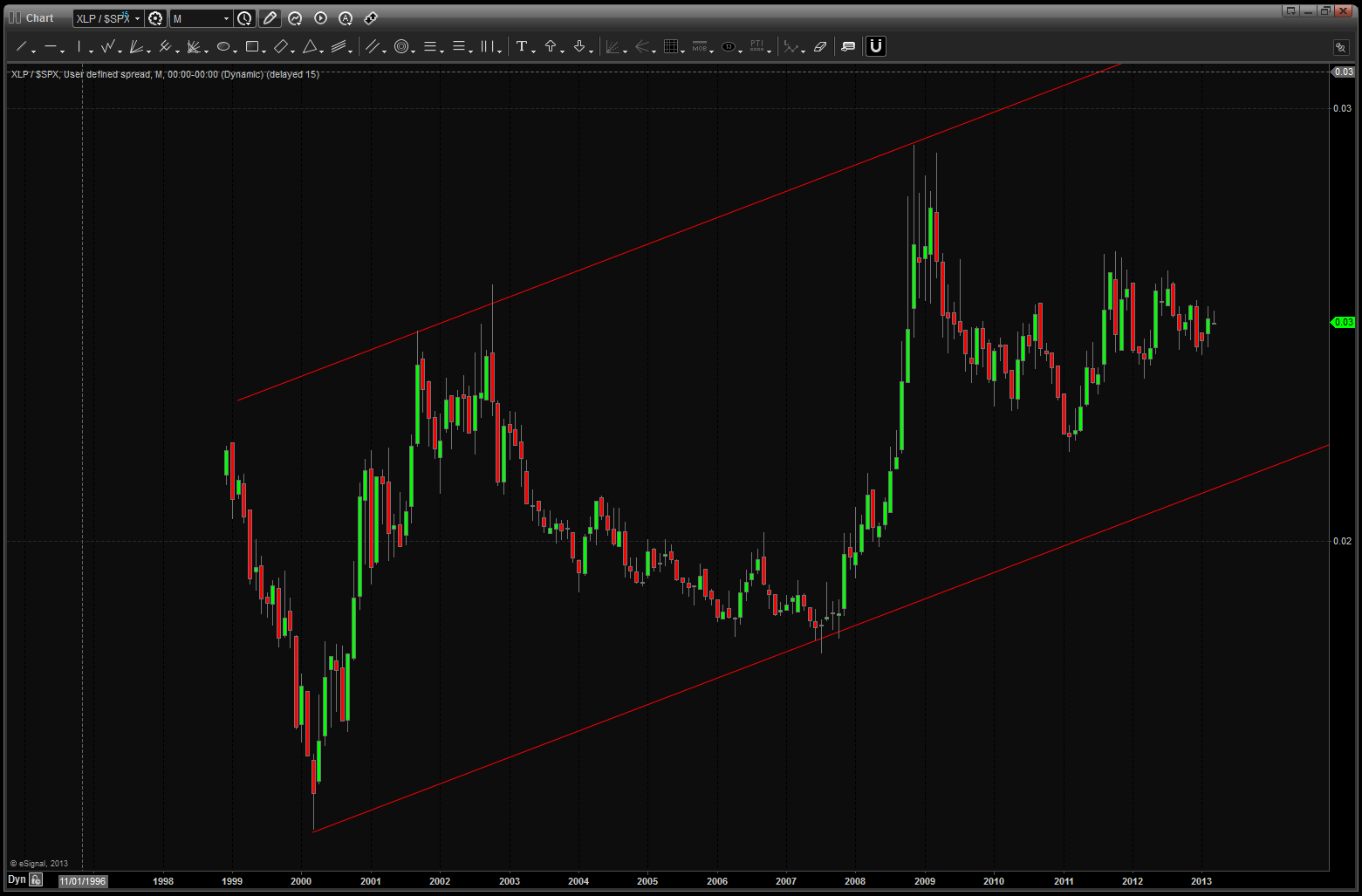 The third chart is a “big picture” view showing a series of “higher lows” w/ normal corrections (.618 retracements) and a potential Elliot Wave Count showing continued strength for a move higher.  What’s extremely important about this chart is the fact that, for the past 1.5 years or so the ratio has been in a consolidating triangle.  As you can see, this is the first time this has happened w/ regards to the long term (monthly) ratio.  Is this an indication of a lack of commitment on the institutions part to roll out of the staples?  It’s becoming apparent that this consolidation is coming close to ending.  Technically, the break from a triangle goes in the direction of the original move into it.  In that case, there is a probability that the ratio will break out and up.  At this time we will monitor some longer term targets that we have on the S&P and look for the opportunity to deploy capital (click chart to embiggen) 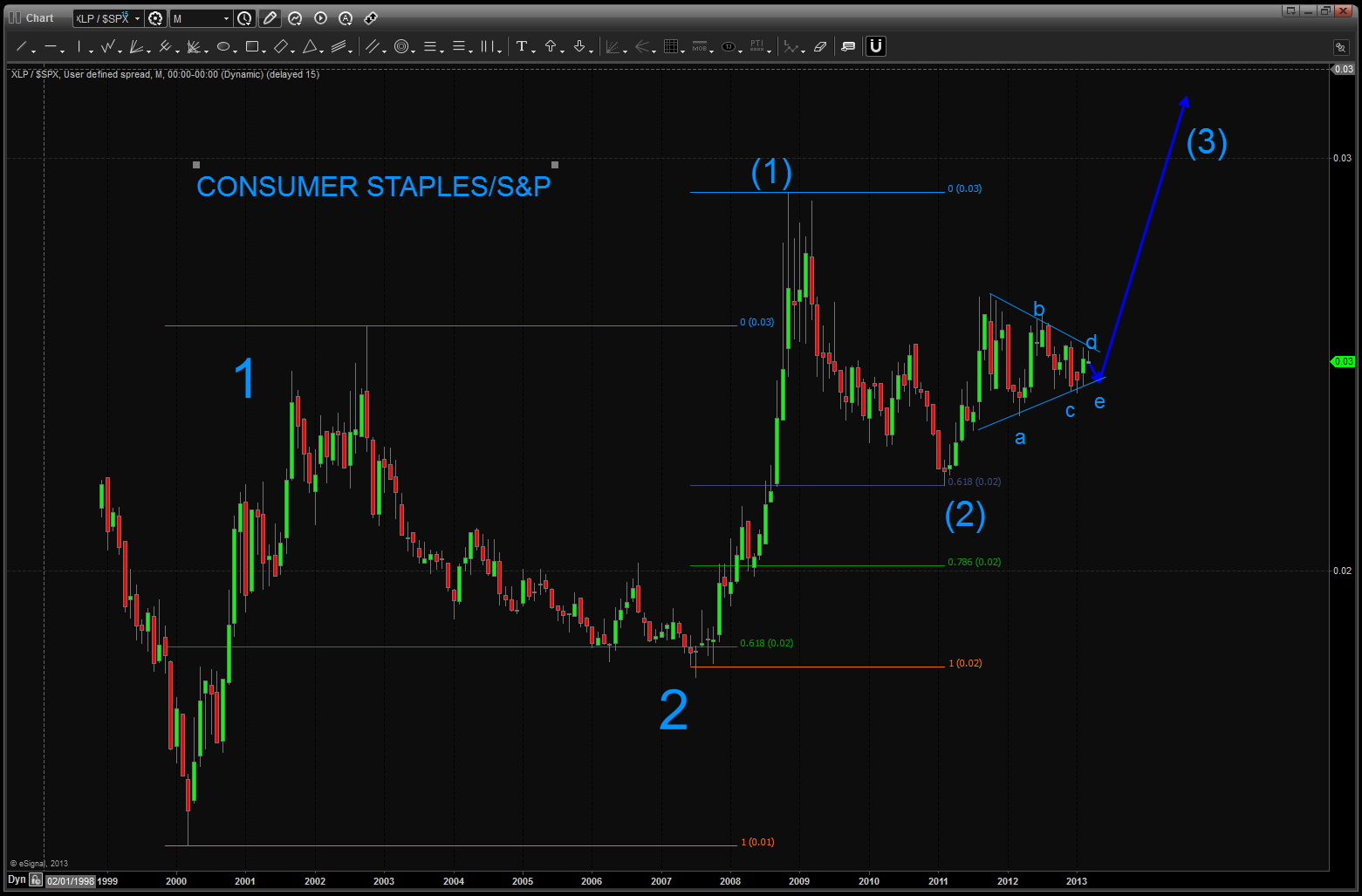 Lastly, the ratio and the S&P are compared.  Of note, the thesis has worked well, however, the recent move higher in the S&P has not been confirmed as a triangle (lack of commitment) has presented itself in the ratio.  Ultimately, if the analysis of the triangle proves correct and we have a break to the upside in the ratio, then a general pressure on the market might appear…. 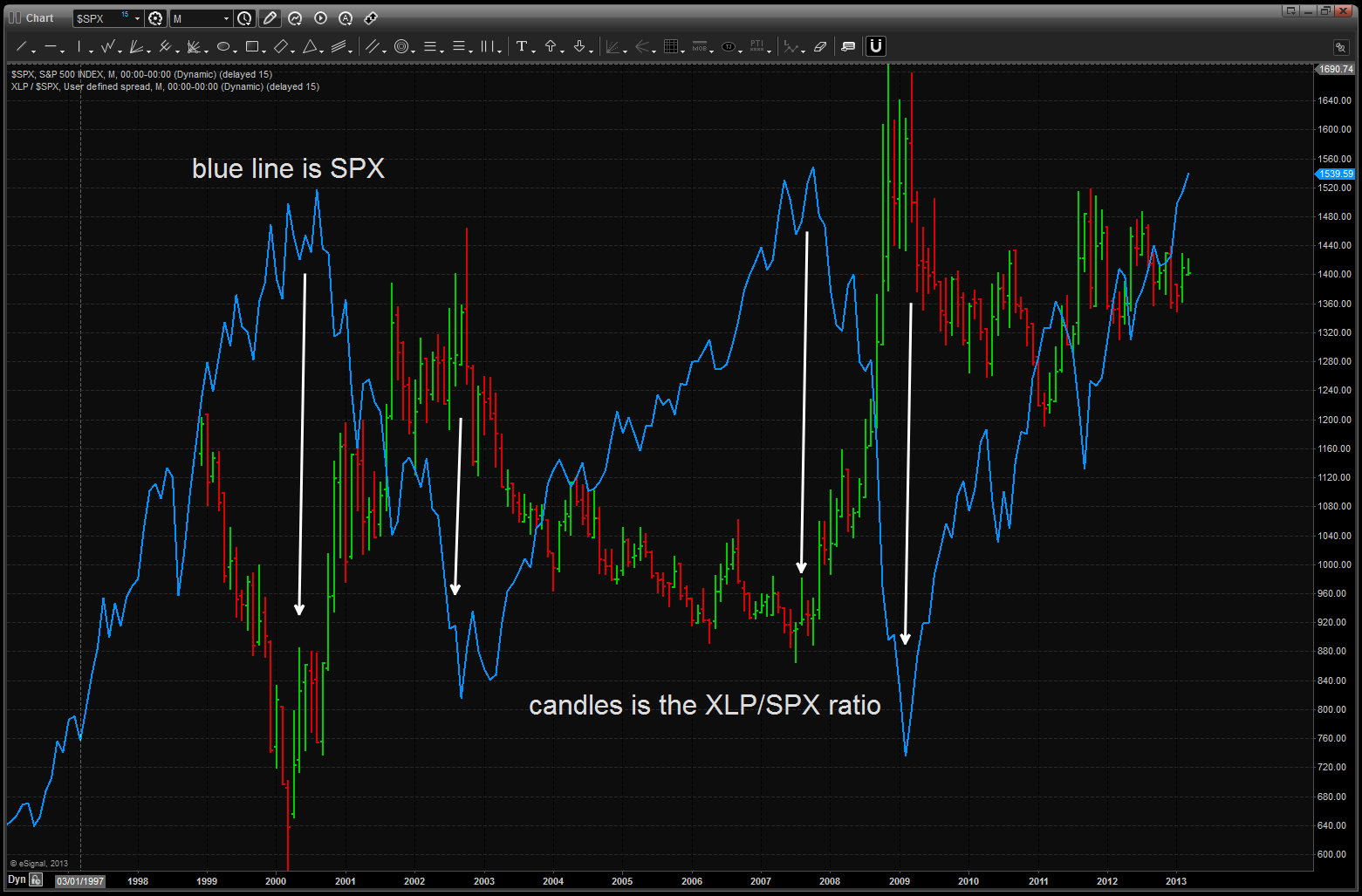 Parabolic Advances and Their Devastating Corrective Moves (May 2012)

Are Interest Rates at a Key Inflection Point? (July 2012)

We’re privileged this weekend to have a killer chart sent to us by my good friend James Bartelloni. He is a U.S. Navy veteran and spent 12 years in the cockpit as a TOPGUN graduate in the F-14. Having graduated from the US Naval Academy with a BS in Mathematics, he later went on earn his Chartered Market Technician Designation. He sometimes uses a bit more of an unconventional approach to technical analysis and likes to call himself an ‘Intermarket Musician’.

“APPLE has made an amazing advance, however, the parabolic nature of this move should cause some concern.  This chart is a simple, yet powerful, way of seeing the natural corrections that tend to occur following these type of advances.  The NASDAQ ($COMPQ), Centex Homes ($CTX), Green Mountain Coffee ($GMCR) and APPLE ($AAPL) are shown.” (Click Chart to Embiggen) 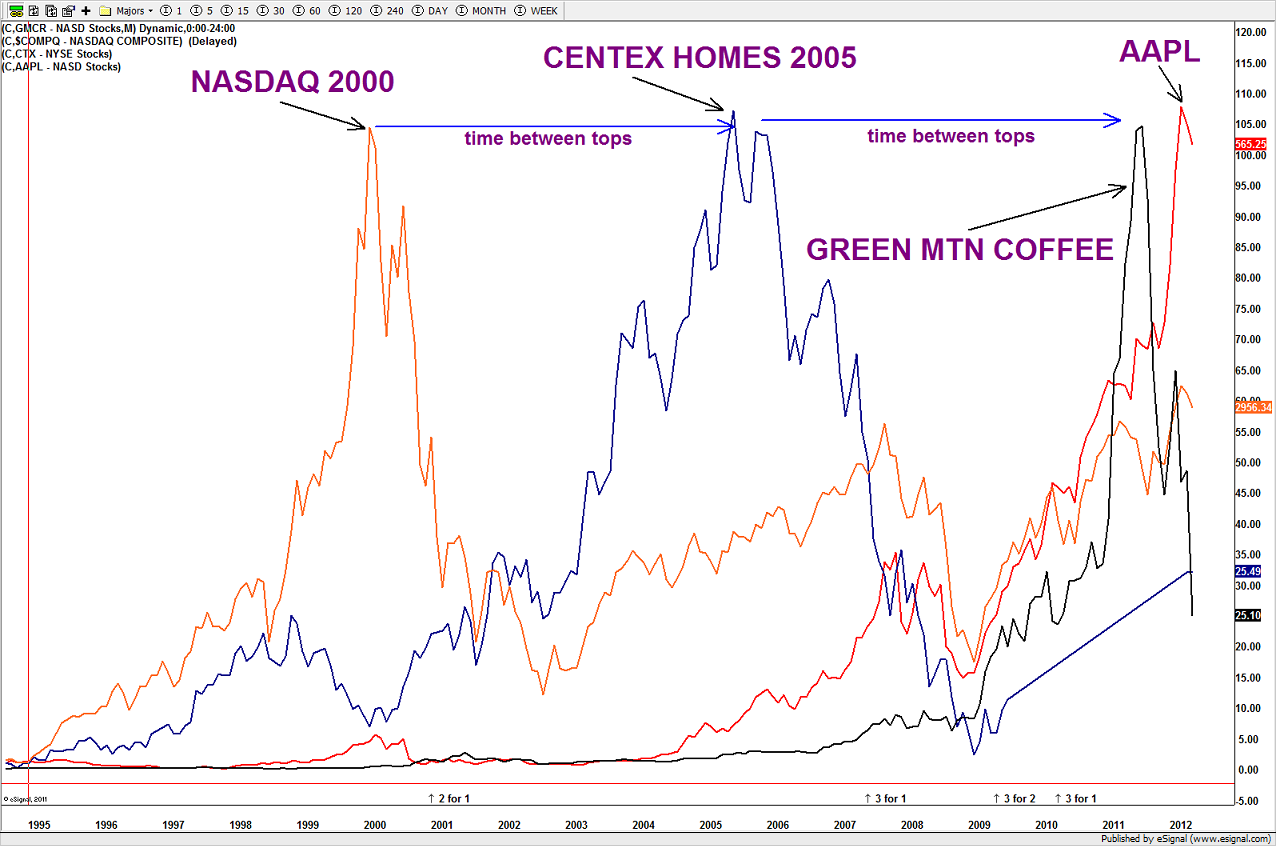 “Note the same nature of the patterns present and the swift and devastating corrective moves that ensue after such parabolic runs.  While it’s hard to even mention a corrective move in $APPL or an analyst “holding” or “downgrading” it, thus far Sir Isaac Newton has yet to be proven wrong.  What goes up will come down …. and the Apple won’t fall to far from the tree.  Caveat Emptor ….”