This week we are happy to announce that we’re launching our new Commodities and Currencies package that includes over 50 charts delivered to our members every week. Each package will include 17 Commodities and 9 currency crosses on multiple time frames with momentum analysis, trend and pattern recognition, support and resistance levels, Fibonacci projections and a detailed risk management process. The goal of Eagle Bay Solutions is to provide our members with the same level of research and technical approach that is applied every day to Eagle Bay Capital’s managed assets platform.

Here is an example of what you will receive as a paid subscriber. In this case we’re looking at Gold, but members will receive this same type of multi-timeframe analysis along with any other relevant information for all 17 commodities and 9 currency crosses once a week:

This symmetrical triangle that’s been forming over the past year is resolving itself to the downside as prices break the lower of the two converging trendlines. We should not be surprised as these types of consolidations tend to resolve themselves in the direction of the underlying trend, which in this case has been down since the 2011 highs. With momentum in a bearish range and rolling over hard, I would expect Gold prices to at the very least retest the 2013 lows near 1180. But in all likelihood we will break those levels and head towards 1000 where we run into support from former resistance in 2008-2009. From a sentiment perspective, there is no where near as much pessimism in this market as there was at last July and December’s lows. This lack of extreme bearish sentiment is likely to be the catalyst to take this market much lower. It would take a rally back above 1290 to invalidate this bearish breakdown (Also see: Silver) 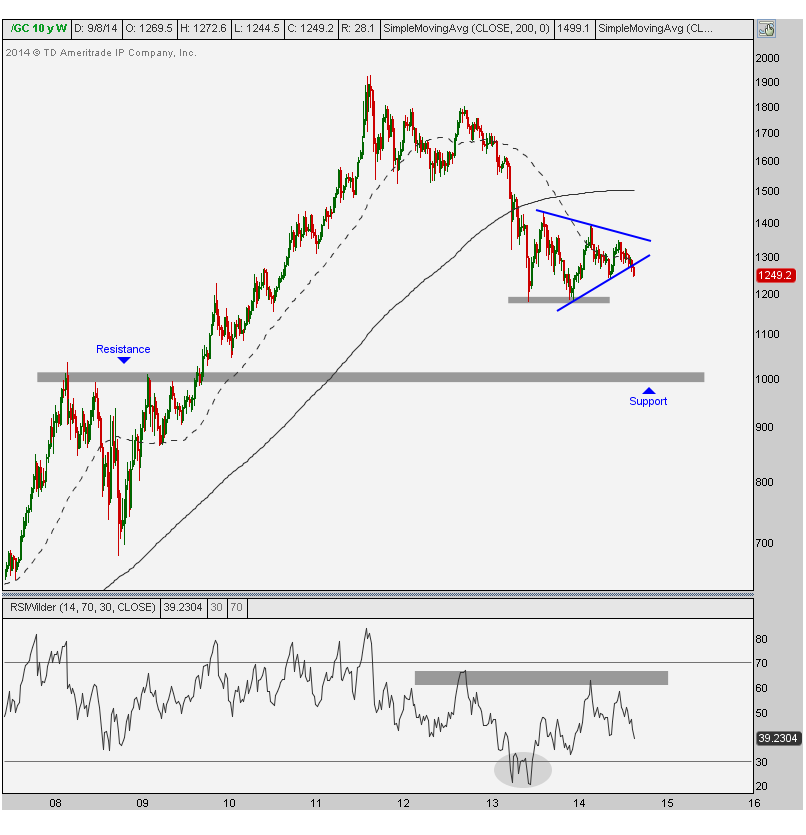 Short-term you can see prices breaking below the lower of the two converging trendlines that define the symmetrical triangle consolidation in Gold. The fact that prices failed to reach the upper trendline in July was warning number 1 that this market was weakening. Now that we’ve officially broken down, we are running into support from the early June lows. I would expect some sort of acknowledgement of this support, but only temporarily. Any rallies can be sold as I think we break this support level very soon and head towards last year’s lows near 1180. It would take a rally above 1290 to invalidate this bearish thesis. Although I believe that is the lower probability outcome, keeping an open mind is something that we take very seriously. If you’re still not in, I think a great short entry would be a bounce above 1270 (Also see: Silver) 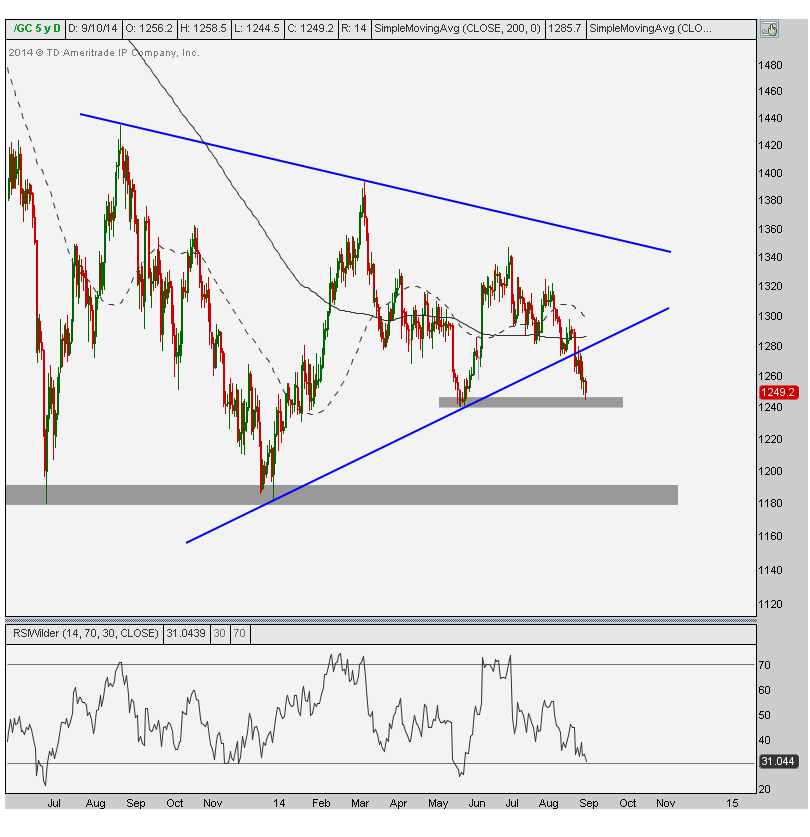