First the good news: Semiconductors held support from the summer. The S&P500 ($SPX) made fresh lows last week, only to quickly reverse, but the Chips were already rocking and rolling. Most key sectors briefly broke down, and some are still down there, but $SMH is already trying to take out it’s September highs: 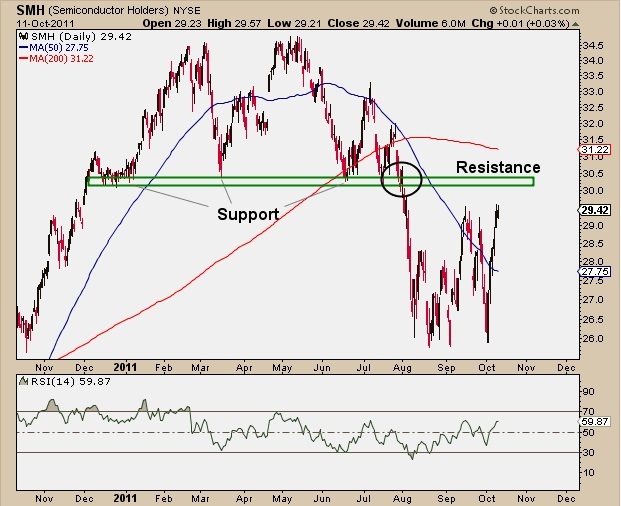 But here is the problem: $30.30-$30.50 was very important support that goes back to December last year. This key support (Green box) was tested successfully in the Spring and then again early in the Summer. It wasn’t until the 5th test at the end of July/early August that $SMH broke and got clobbered.

I had the pleasure of attending the Big Picture Conference yesterday and heard Doug Kass call Technical Analysis: “Voodoo”. He then went on to say, “except for key support and resistance levels”. Doug: With all due respect, what the hell do you think technical analysis is? It’s a study of supply (resistance) and demand (support). Period.

This chart of semiconductors is a good example of this. In December last year there were buyers at this level. In March, there were buyers. Then again in June – Buyers. Eventually, anyone willing to buy at this price will have already bought. This is when the chart breaks, because the only participants left are sellers. That takes us to where we are today, attempting to get back above that level. We know from our previous statements that these price levels are full of sellers (because the buyers ran out right?). This key resistance is why $30.30-$30.50 means trouble.

Meanwhile, a few of the big components in the ETF are running into some resistance of their own. Intel ($INTC) is bumping up against multi-year resistance around 23-23.50. Applied Materials ($AMAT) has been under-performing relative to Semi’s as well as the broad market and is currently bumping up against it’s downward-sloping 50 day Moving Average. But Texas Instruments ($TXN) still seems to have a little room before getting to resistance around $31.50-32.00.

I don’t see Semi’s breaking through this former support without a battle first. And I can’t imagine the Nasdaq Party being this wild without further participation in the chip stocks.

Texas Instruments ($TXN) has agreed to buy National Semiconductor ($NSM) for about $6.5 billion – a 78% premium to yesterday’s close (Bloomberg)

Let’s get right down to business and break down the Semi’s: 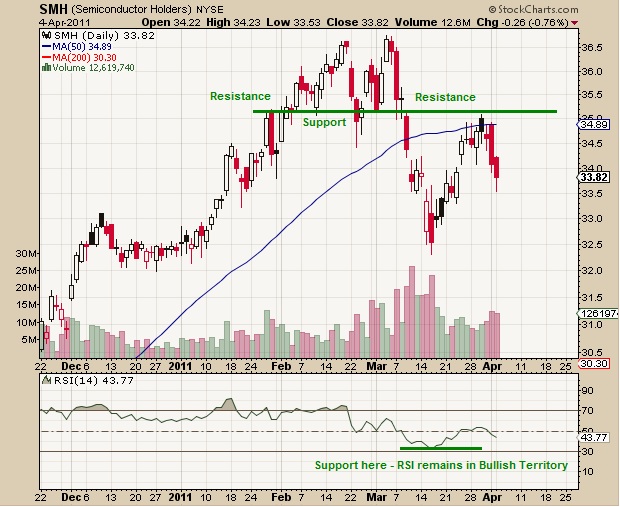 Over the last couple of days these chip stocks had been under-performing and some of these looked like they were falling off a cliff (I’m talking to you Intel).

This morning, all of these names are bidding a little higher in the pre-market due to the M&A. The question is whether or not $SMH can clear resistance and follow through. As you can see in the chart above – the Semi’s failed to get above that key $35.00 level last week. This area marks trouble because it was January Resistance that became February Support and now overhead Resistance once again. We find the 50 day Moving Average chilling out right here also.

The Bid/Ask this morning is 34.50 x 34.55.  If $SMH can catch $35 today and hold it this week, we should see new highs in the space. This would be great for the Nasdaq as Semi’s are a leading indicator for the Tech-heavy index.

And anything good for the Nasdaq is good for our portfolios.