We have more important things to worry about.

Technical Analysis is an Art and NOT an exact science. There are a lot of haters out there that just don’t get that. Just because a random talking head says to do something based on some “indicator” doesn’t mean you should do it . And it certainly doesn’t mean that all technical analysts should be grouped together. Think about what you’re looking at with some common sense before making portfolio altering decisions.

In this case, we’re talking about the “Golden Cross” for the S&P500. The media gets all excited (because they get paid to) when the 50 day simple moving average breaks above the 200 day simple moving average. This is happening in the S&P500, and supposedly it’s a sign of good things to come. If you watch enough television you would also be led to believe that the opposite is true when the 50 day drops below the 200 day. They like to call this the “Death Cross”. Sounds scary doesn’t it? It’s supposed to. If you don’t get scared, you don’t buy newspapers or watch financial television.

The stats sound good though. From Bloomberg:

“There were 26 instances in the past 50 years when the S&P 500’s short-term average crossed above the long-term gauge, according to Birinyi. The index rose 81 percent of the time with an average increase of 6.6 percent in the next six months, the data show.

Stocks posted bigger returns when the S&P 500’s 50-day rose above a falling 200-day, Birinyi data show. The index jumped an average 10 percent over the next six months, according to the study.”

But think about what we’re talking about. Moving averages, by definition, are lagging indicators. The 200 day moving average consists of data that goes back almost a year. And the 50 day has data from this Fall (no pun intended). If I’m going to look at moving average crossovers as an indicator, I’m at least going to use Exponential Moving Averages that add more weight to the recent data (But this is a conversation for another day).

Look at the S&P500 with the most recent crossovers in green (golden cross) and red (death cross). Back in July of 2010, the silly death cross would have told you to sell just when you should have been doing the complete opposite. Not only was it NOT time to sell, but it was actually THE BOTTOM and time to be buying. (See Reuters Article from July 6, 2010). The Golden Cross a few months later would have finally told you to buy, but you would have paid up dramatically. 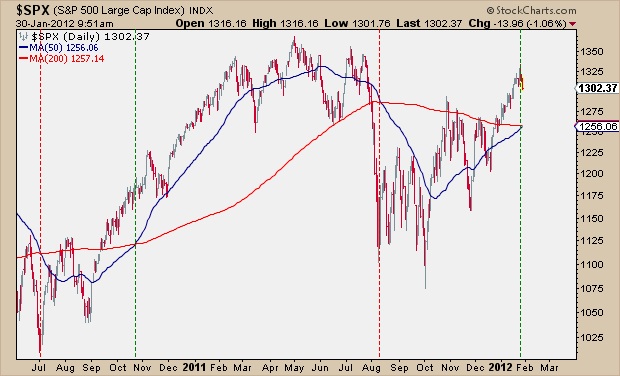 Now look at the next sell signal in August last year. Not only did this “Death Cross Sell Signal” come 3-4 months too late, but once again, it was a time to start buying and NOT selling. Although, the S&P500 made a new low a few months later, more stocks had diverged positively and were already heading higher. So now after a 20% rally it’s time to start buying? Oh ok….

You see how little sense this makes?

The bottom line is that I’m paying more attention to what individual stocks are doing these days than I have in a long time. As we discussed on Friday, it’s important to listen to what the major averages are telling us but I’m relying more on the individual names. There are plenty of stocks to buy and plenty to short out there – I’m not trading the S&P500 Index. We might be back to a ‘market of stocks’ and less of a ‘stock market’. I’m hoping anyway. We’ll see. For now at least, we’ll be taking advantage of it while we can.