Get ready to hear all about this Long-Legged Doji that appeared in the weekly chart of the S&P500. They’re scary when they show up after a big move. I look at Japanese Candlestick Charts because I think they give us the most information in the simplest way possible. This type of doji candle signals indecision about the future direction of the S&P500. 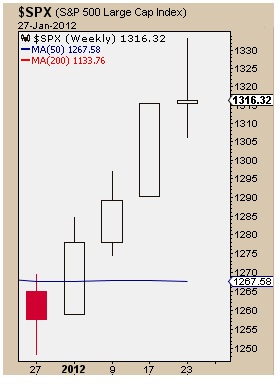 The fact that it showed up after a big run up in stocks makes the candlestick that much more significant. It’s telling us that the forces of supply and demand are nearing equilibrium. This happens a lot when there is a shift in trend taking place. Look at all of the reversals that came after those long wicks in the candles. 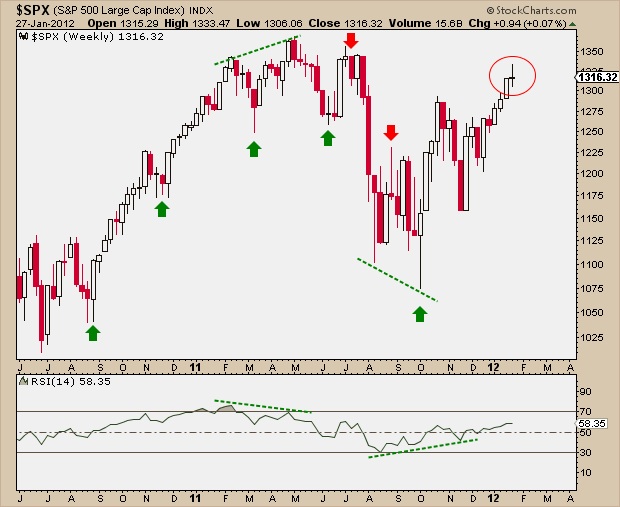 The S&P is up over 22% since the October lows and 14% from the Thanksgiving bottom. That’s a lot fast. So a reversal will come. The question is when? The doji doesn’t necessarily mean that the reversal is here, but it is definitely a warning sign. For example, look at the candlestick the week of August 15th. The extended wick below the candle did NOT precede a reversal. The market continued lower regardless, which is a really bearish sign in and of itself. We will make the same conclusion if the market continues higher in the face of this long-legged doji. That would be intermediate term bullish.

Candlesticks are just one tool of many for a technician. We’re not going to take this single data point and make portfolio altering decisions based on it. But if the stocks in this stock market were all looking toppy and other things we look at were bearish, that’s one thing. But a) I’m not trading the S&P500 Index, and b) there are individual names out there that look great and keep rocking. There are also plenty of stocks that you could sell short. Isn’t it great that we can actually trade individual stocks again? I’m having so much more fun than when it was this ridiculous risk on/off stuff. Hopefully correlations peaked last Fall. We’ll see.

Also some of the other major averages don’t look like the S&P500 this week. Their candles actually look much healthier and constructive. The RSI in weekly S&P just made a new recovery high and there is still plenty of room for it to run. So I’m definitely not in the ‘sell everything’ camp just because of this one candlestick. I think we keep trading what has been working. No need to get cute. A big red filled candle next week would be confirming action of this potential reversal. So we’ll at least be looking out for that.

If you’re interested in learning more about Japanese Candlesticks, Steve Nison is the man. He wrote my favorite book on the subject.