Earlier in the week, we held our May Monthly Conference Call, which Premium Members can access and rewatch here.

In this post, we’ll do our best to summarize it by highlighting 5 of the most important charts and/or themes we covered, along with commentary on each.

When fishing as a kid, we would often throw bread in the water to attract our prey. More often than not we’d end up feeding the ducks as they would get to the snacks first. And when they’d see their friends enjoying a good meal, others would follow. Before we knew it, we’d be feeding a party of ducks!

This reminds me of how we’re playing many of our long positions in equity markets right now.

As we continue to see more and more key sectors and indexes achieve our upside objectives (in both the US and abroad), it feels like we’re constantly taking profits and building up our cash for position these days. The list of indexes hitting our targets is so long right now that we’re basically feeding another party of ducks! At least these ones pay for the food…

We covered a ton of these charts on this month’s call. Among the most important of them is the Large-Cap Financial Sector SPDR $XLF, which has tacked on an additional 20% since resolving higher from a ~13-year base earlier in the year.

Here is a long-term view, showing XLF digest these recent gains just beneath our primary objective of 38: 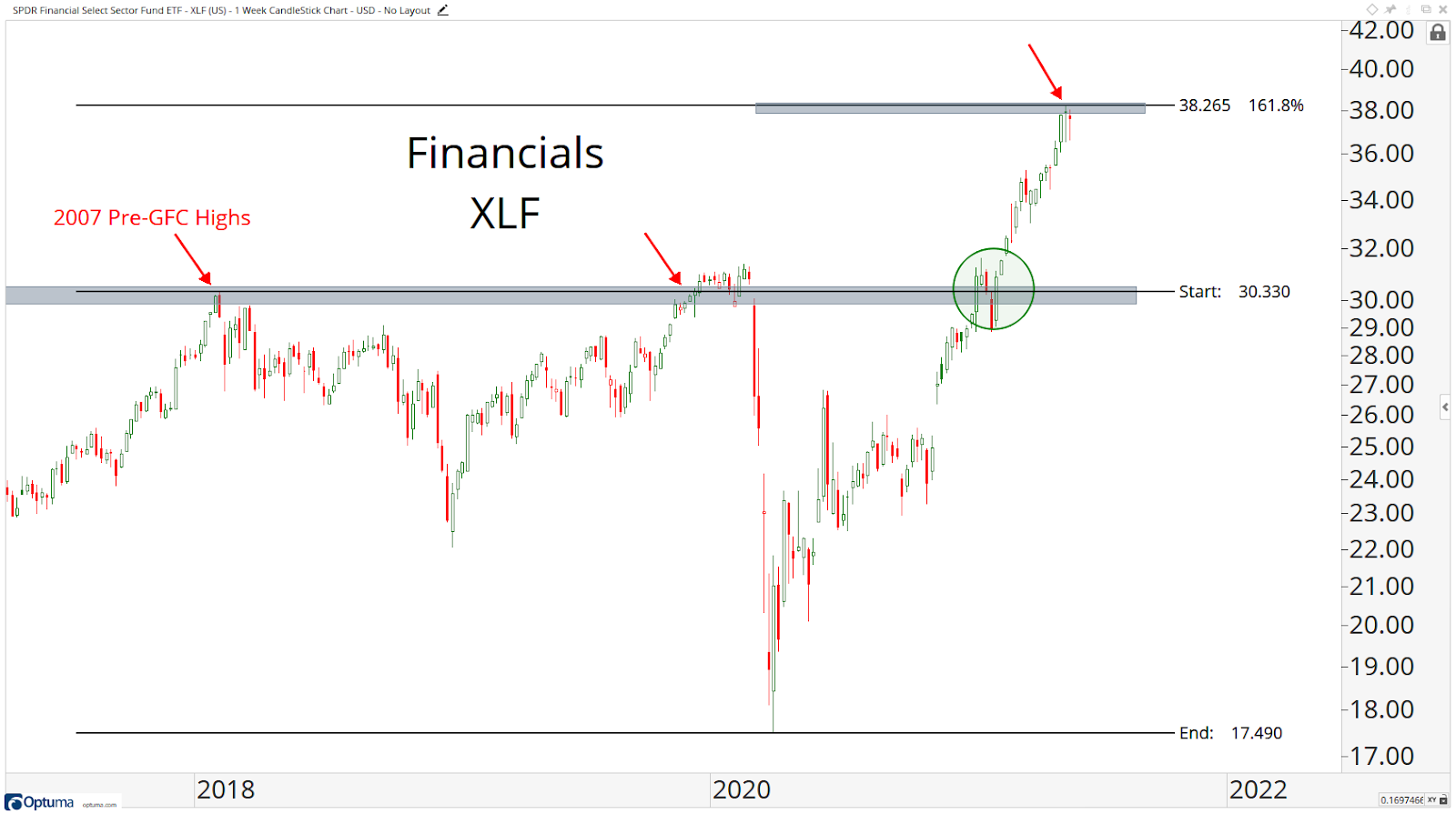 So, what’s the move? Considering the growing number of risk assets that are acting the same way right now, it’s definitely time to feed the ducks and take some money off the table. Depending on the chart, in many cases, it’s been time for a while.

And with a market backdrop full of mixed signals, the last thing we want to do is get greedy here.

And the same is true for a whole laundry list of Sector SPDR ETFs which have also achieved our objectives and are now consolidating at key levels. And we’re just talking about the big guys. The list gets a hell of a lot longer when we consider our entire sector universe, which includes equal-weight, small, and mid-cap indexes as well…

We touched on this theme with some international examples in last month’s takeaways and the trend has only accelerated in the time since as a handful of other sector indexes have achieved our targets in recent weeks and are now looking vulnerable as they consolidate right around these logical levels of supply. And Mr. Market hasn’t discriminated among groups at all. From the more defensive Health Care and Real Estate, to the growth-oriented Discretionary and Tech, and even the value-heavy leadership groups like Industrials, Materials, and Financials (shown above) – we’re seeing this kind of price behavior everywhere.

This continues to support the choppy environment we’re presently in and suggests the best course of action is to keep riding the winners and fading the losers.

Click here to read about how we’re expressing this thesis.

2. Trends Still Out Of Sync Across Timeframes

With that said, looking out over longer timeframes, the structural trends that have been in place, remain intact. And among them is the new bull market in equities, so we anticipate that prices eventually resolve higher.

Here is the STOXX Europe 600 Index, which hasn’t stopped grinding higher since breaking back above its pre-COVID highs last month and confirming a massive multi-decade base breakout: 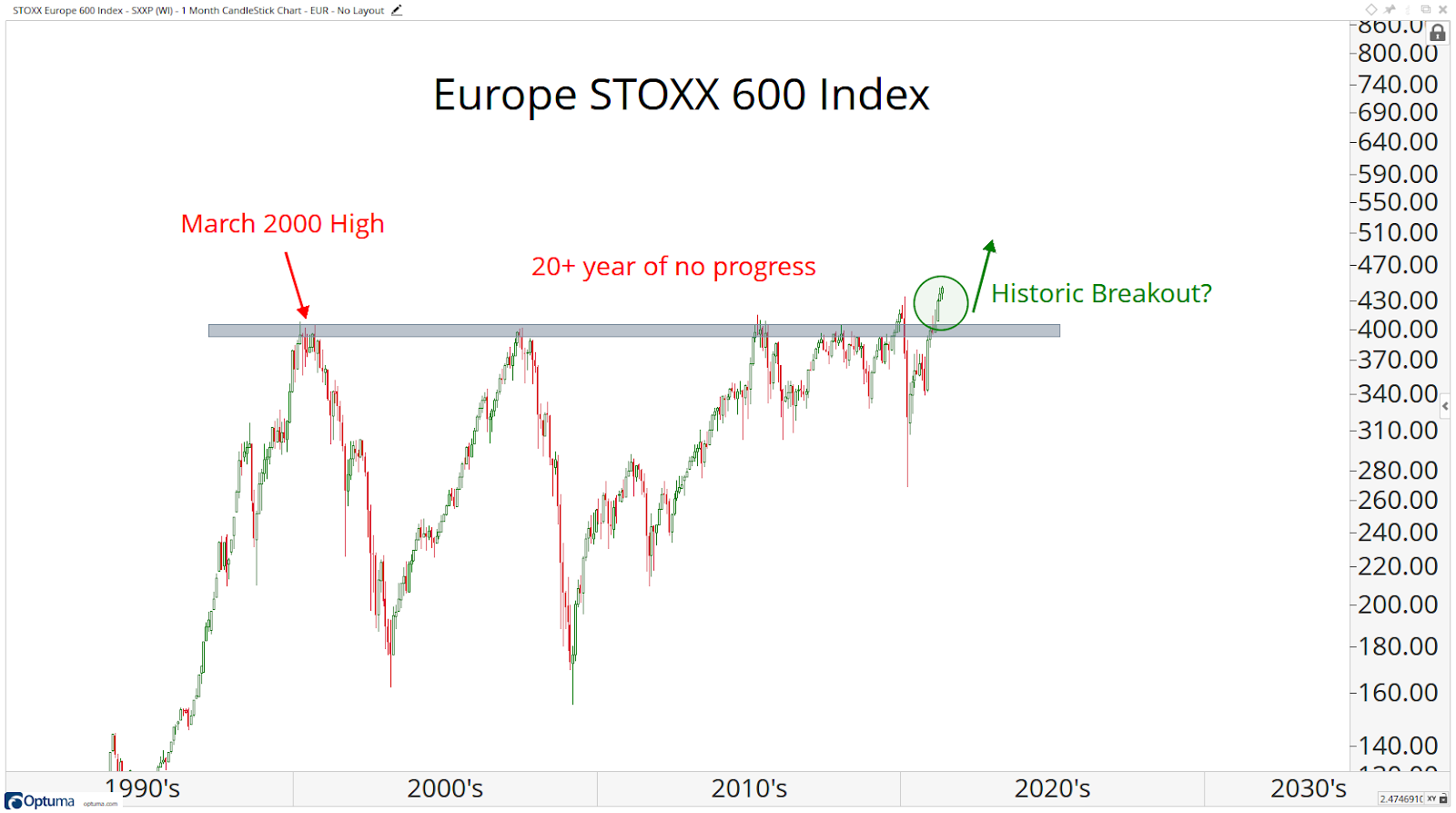 This is one of the many pieces of evidence keeping us in the camp that stocks in the US and around the globe – even those areas that are showing weakness and vulnerability right now like Emerging Markets and other diversified international indexes, will follow higher in time.

The question that remains is simply…

“How long will it take?”

That was more or less the theme of this month’s call.

And as we’ll get to below, this doesn’t just apply to equity markets, but we’re also seeing this all over the place in Currency and Commodity Markets as well.

Speaking of which, we covered a ton of forex crosses in the call this week. Far more than usual, at least. Whenever we pound the table on something like this there’s a reason. In this case, it’s all about the Dollar…

“And the (bulls’) bells were ringing.” I think it goes something like that. Either way, The Band hit it right on the nose with these lyrics from their 1969 hit single.

This song reference couldn’t be more relevant for the US Dollar Index $DXY today as sellers have been driving prices lower since last year, and are now pressing on key multi-year lows. We’re at an inflection point for sure: 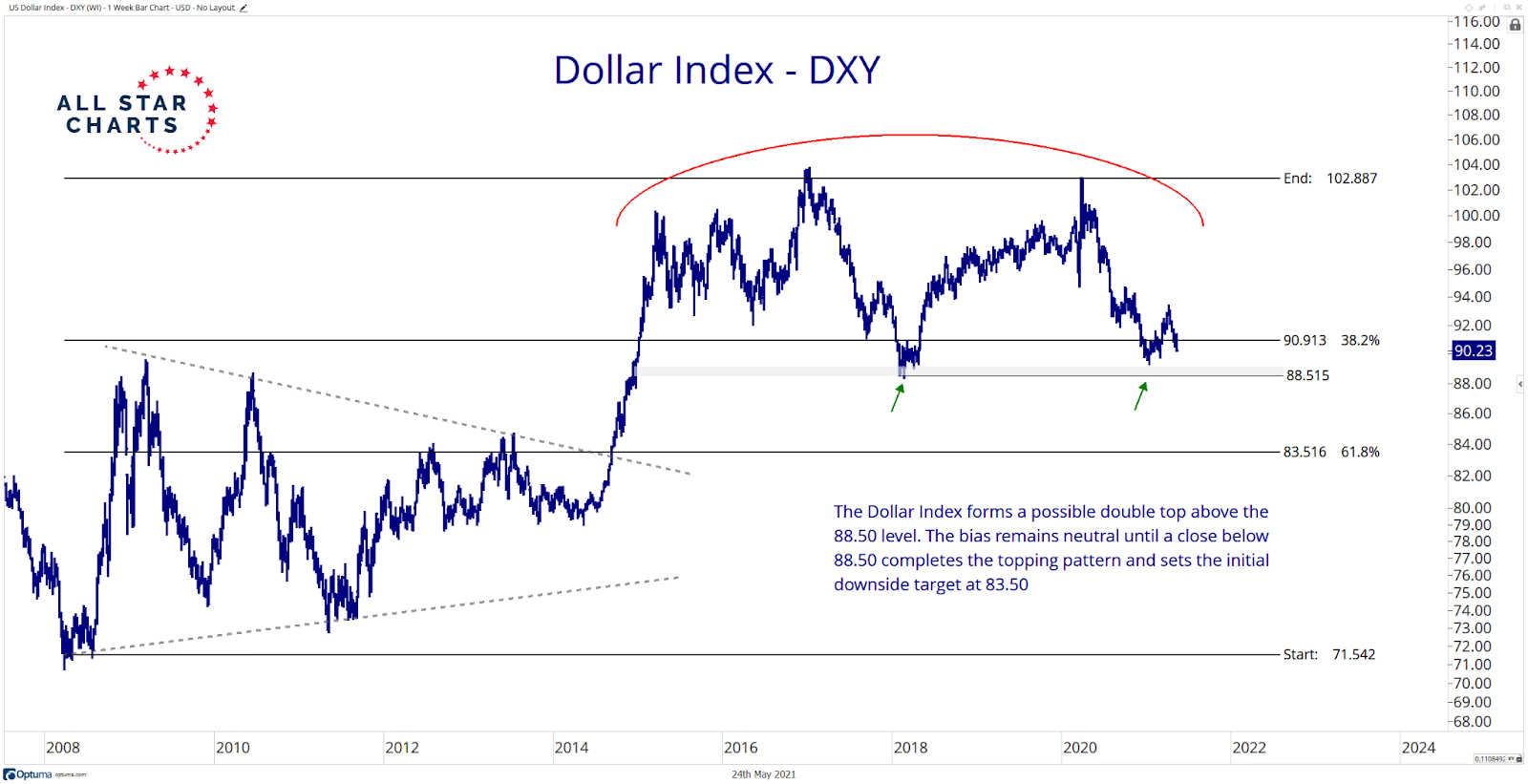 Things are looking quite vulnerable here as we’re currently retesting the 2018 lows for the second time this year. A violation of this critical support level would likely send some serious ripple effects through markets, particularly those denominated in USD.

And just like equity markets, the weight of the evidence continues to stack up against it as the world’s reserve currency continues to show weakness beneath the surface as well. USD is in a downtrend against almost every other major currency around the globe across just about every timeframe.

We expect to see more and more downside resolutions in the future. Especially the more risk-on markets like the Aussie and Canadian Dollar, as well as traditional EM risk currencies like the BRIC countries and South African Rand.

*We’ve written about all of these in our Currency Column recently which you can access via the hyperlinks above.

We think USD/CAD (click link for updated chart) – despite only representing about 9% of $DXY, is an excellent road map of what to expect from the index.

The bet we are making is that the US Dollar eventually breaks down. At least that is what the weight of the evidence strongly suggests as we continue to see an overwhelming number of currencies break higher against the US Dollar.

And this is not just a Developed Market theme anymore, we’ve seen this Dollar weakness bleed over into EM which was the only evidence left in favor of USD bulls – up until now…

Do we get a counter-trend move first th0ugh? Even just a slight bounce off these former lows here? We think that would make sense considering everything else we’re seeing right now.

So once again, we do expect DXY to break lower eventually, but we don’t know exactly how long it will take! 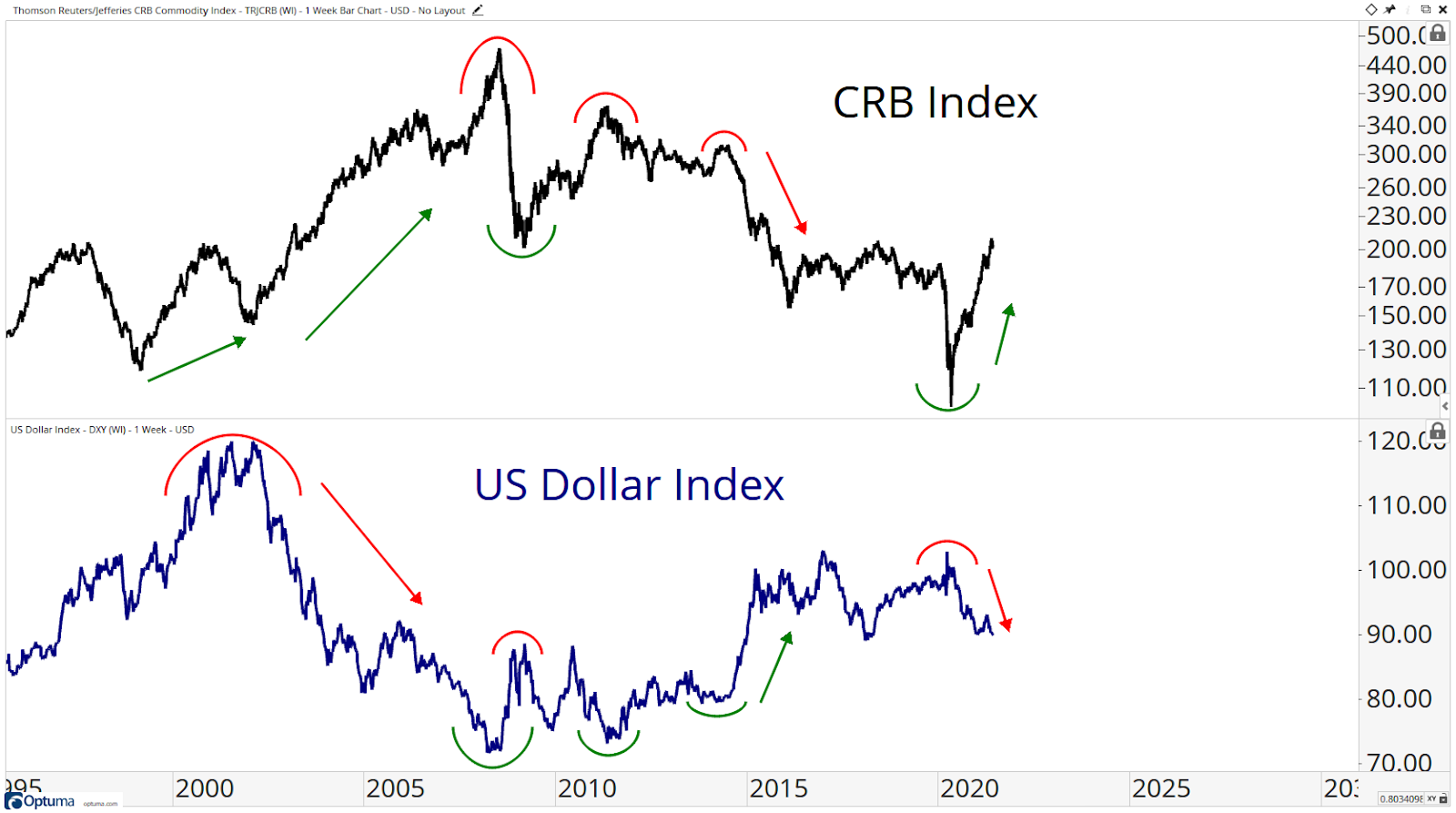 But another thing we know is that when the Dollar finally does break down, it should be a significant tailwind for commodities.

And when it comes to Commodities Markets, we think Precious Metals are emerging as the future leaders and have now become a space we want to be looking for long opportunities. One of the areas we like a lot is Gold Miners, which we’ve been long since March.

But this outperformance also has some serious intermarket implications. And in a scenario like the current one, whereby Copper could be stalling out as it loses momentum at its all-time highs from over a decade ago, we want to be watching its relative performance vs Gold for insight to Credit Markets.

One of our favorite intermarket indicators in the world is the Copper vs Gold ratio as it has historically been an excellent signal when it comes to confirming the price action in Treasury Markets.

Here is a look at that relationship in a ratio chart. We’ve inverted it in order to illustrate exactly how many ounces of Copper it would require in order to purchase the equivalent weight in Gold: 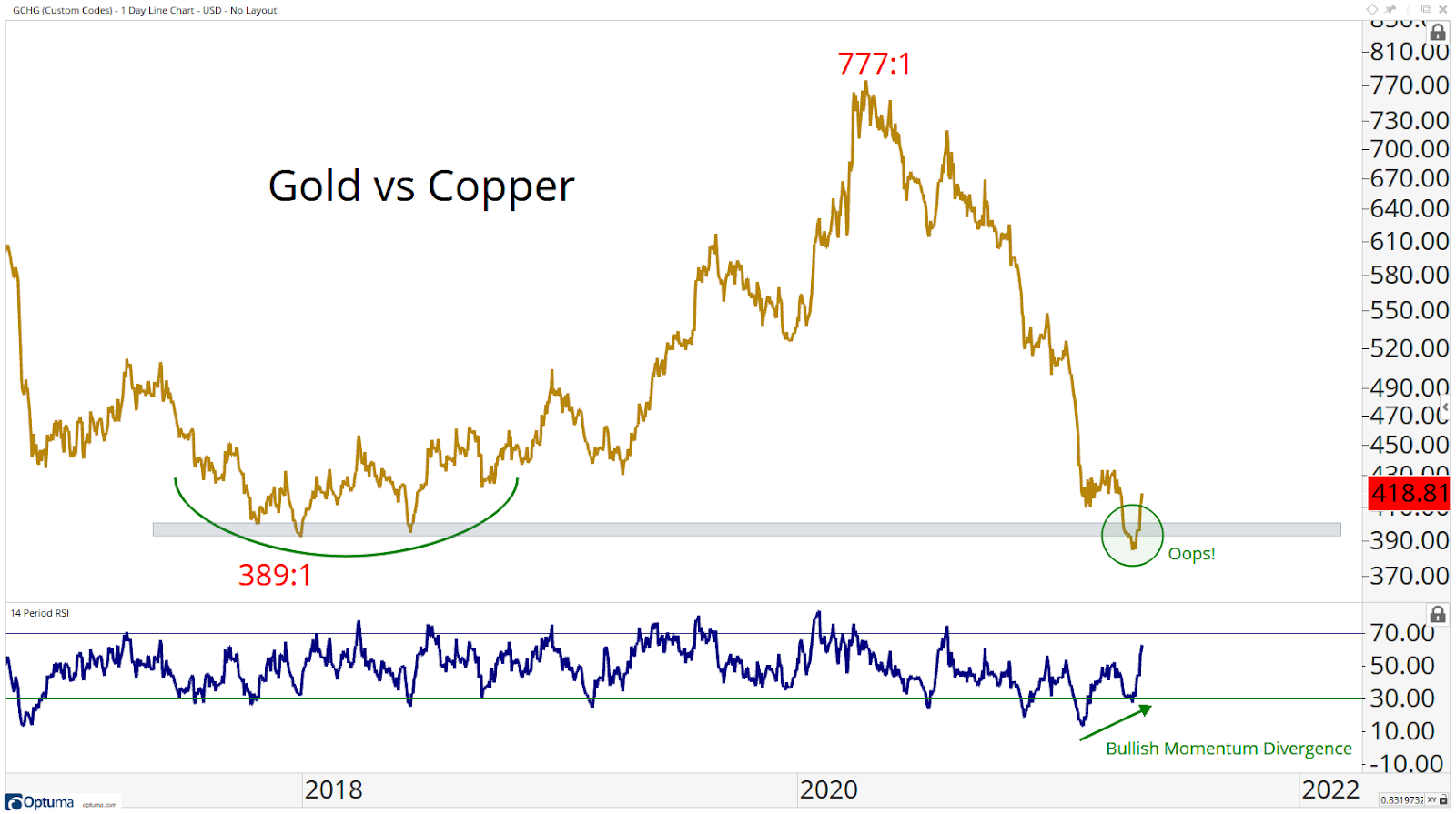 If Gold is ever going to outperform Copper, this would be the place! And we think there’s a good chance we’re already witnessing the start of it now. You can see this on the chart as the current bullish momentum divergence is being confirmed by the ratio as it swiftly, but briefly undercut its key former lows before reclaiming them with a fast move higher.

In fact, JC ended the call with a little educational lesson and an example of this exact pattern which he calls his “favorite kind of double bottom.”

On an absolute basis, today Copper looks just like Gold did this time last year. Could we be in for a potential failed breakout from Copper as well as a failed breakdown from this crucial economic barometer on BOTH absolute and relative terms!?

That most certainly wouldn’t be bullish for yields… And it’s likely that risk assets, in general, would be under pressure in an environment where Bonds are ripping and rates are falling. Although it would fit into our theme of defensive assets continuing to show relative strength.

We still believe both of these metals eventually break out, but once again the question is simply… “How long does it take?” We think that time comes sooner rather than later for Gold, but likely the opposite for Dr. Copper.

5. Shorting The Sentiment On The Cover Story

Messy for longer continues to be the mantra for us for the foreseeable future. There are just far too many mixed signals out there right now as bearish data points continue to pile up and muddy what was once very clearly a market dominated by the bulls.

And to no surprise, we aren’t only seeing this in price. We’re also seeing it in our breadth work, our sentiment indicators, and even our intermarket analysis.

In terms of sentiment, JC recently put out a post discussing what we refer to as the “Magazine Cover Indicator” along with a slew of examples of just how well it’s treated us in terms of helping identify major market peaks and troughs in recent years. Read it here!

Just this weekend, the New Yorker published another issue with a rather extreme illustration of the city on its cover this weekend. You can see it on the right hand side of the image below: 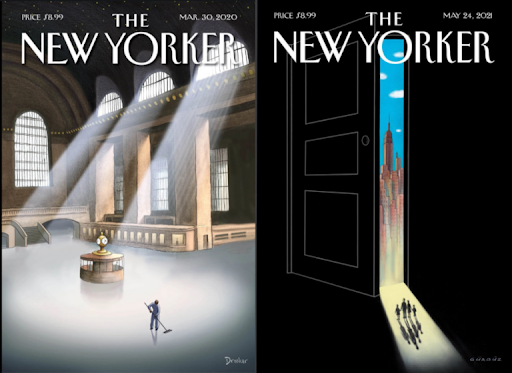 Now, contrast this with the magazine cover on the left and take note of the date on that issue…

That’s right, a gloomy picture of the city closing down and an empty Grand Central Terminal was on the cover the very week after stocks bottomed last year!

And now just a little over a year later, we have another dramatic cover story illustration… Only this time it’s not gloomy at all. Instead, it’s overly upbeat, showing the city reopening from a state of absolute darkness. Maybe it’s nothing, maybe it’s something. But considering how excellent this indicator has worked of late, it’s most certainly something we want to pay attention to.

Those are just some of the main takeaways from this month’s call, but we’re seeing a lot of significant developments take hold in markets right now and it’s important investors be aware of them.

Bottom line, there are some major shifts in character taking place beneath the surface right now, so you definitely don’t want to miss this month’s call. As always, Premium Members can rewatch it and view the slides here!

If you are not a member but enjoyed this post, you can click here for a risk-free 30-day trial and watch the full Conference Call!

Hope you enjoyed this post. Thanks for reading and please let us know if you have any questions!