We don’t have to complicate things. It’s very simple. If there is actual risk appetite for precious metals, then Silver would be outperforming Gold, not the other way around. The Gold Bugs have little to say at this point, so some of them irresponsibly cherry-pick year-to-date returns to pretend Gold is in an uptrend. Some of them do it out ignorance while others need help selling whatever product preys on the poor souls who believe their conspiracy theories and end of world stories. There’s a huge market for that kind of stuff. But for the rest of us who are humbly just trying to turn a profit in the market by managing risk responsibly, we need to look at things objectively.

Today we are taking a look at one of my favorite gauges of risk appetite vs risk aversion for one of the most important asset classes in the world: Gold. We’re in a current market environment where stocks are making all-time highs. We’re not just talking about U.S. Stocks, but all over the world. Meanwhile, Gold would need to rally 50% from current levels just to get back to where it was in 2011. Silver would need to rally 190% just to get back to those former highs. And these clowns have the audacity to suggest precious metals are in an uptrend? Come on! Some of these crazies were carried out in stretchers after 2011 and we’ve never heard from them again.

Here is the ratio chart I’m referring to. The counter-trend rally in Gold that we saw throughout most of 2017 has not been confirmed by Silver. If there was real risk appetite for Metals, like in early 2016, or throughout 2010, for example, Silver would be outperforming Gold, not the other way around: 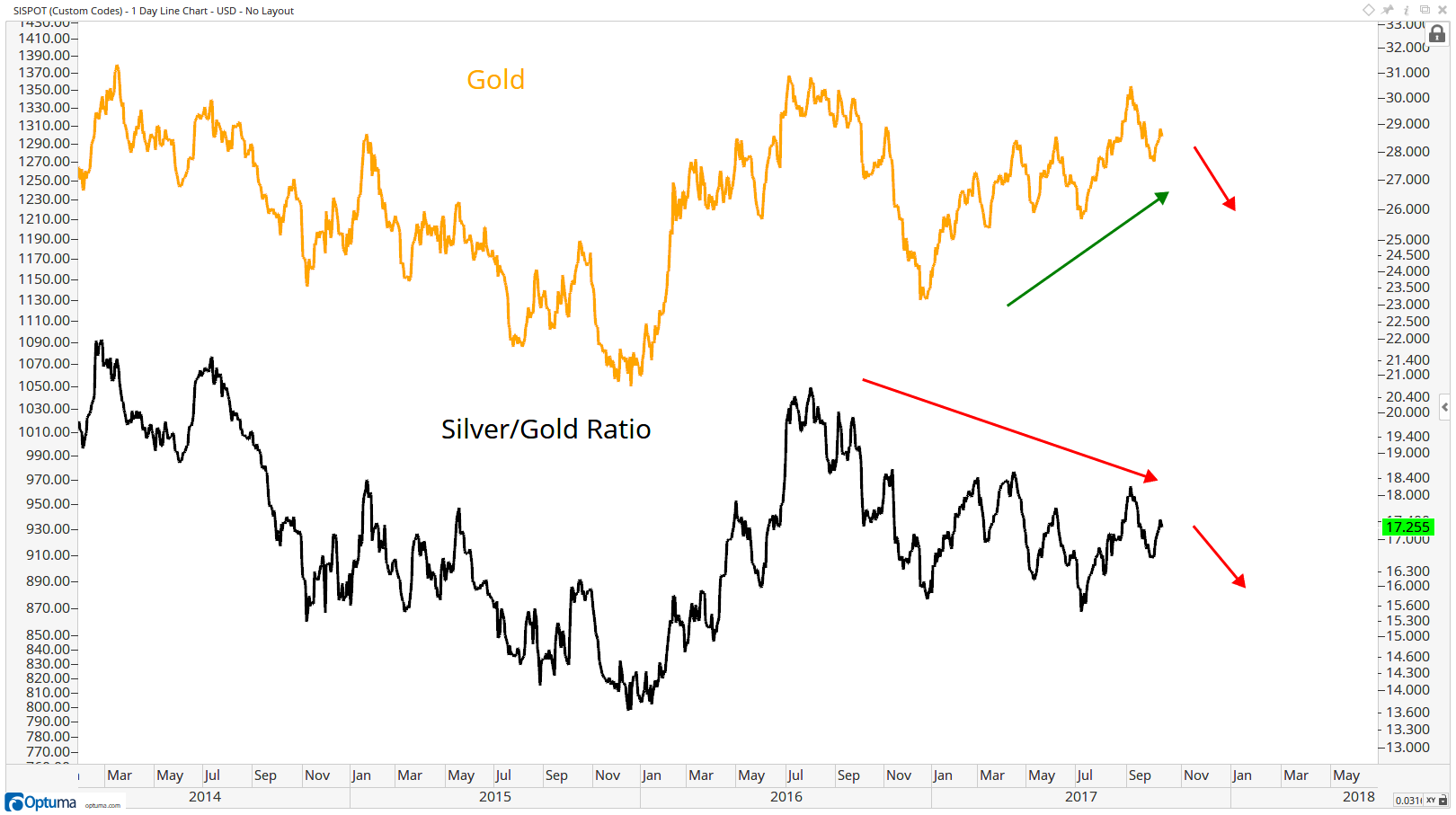 As market participants, we want to keep an open mind at all times. Knowing that we know nothing is the greatest gift to an investor. At Allstarcharts, we have an amazing community of traders, portfolio managers, investment advisors, hedge fund managers, mutual funds, family offices and individual investors. We all pride ourselves on entering the marketplace with a completely open mind without any sort of bias whatsoever.

I would love to get long Gold, but today is not that day. Commercial Hedgers (the smart money) still have on near-historic short positions. Do you want to fight them on that? Meanwhile, they also have on historic long positions in the US Dollar. If they’re right and US Dollars rip, how do you think gold is going to do in that environment?

The cleanest trade I see out there is in the Junior Miners. We want to be short the $GDXJ if we’re below 35 with a target under 28 for now. If prices are above 35 then I think we can start to make a stronger argument that this is a bigger base of a larger bottoming process. But that hasn’t happened and quite frankly I think that is the lower probability outcome. 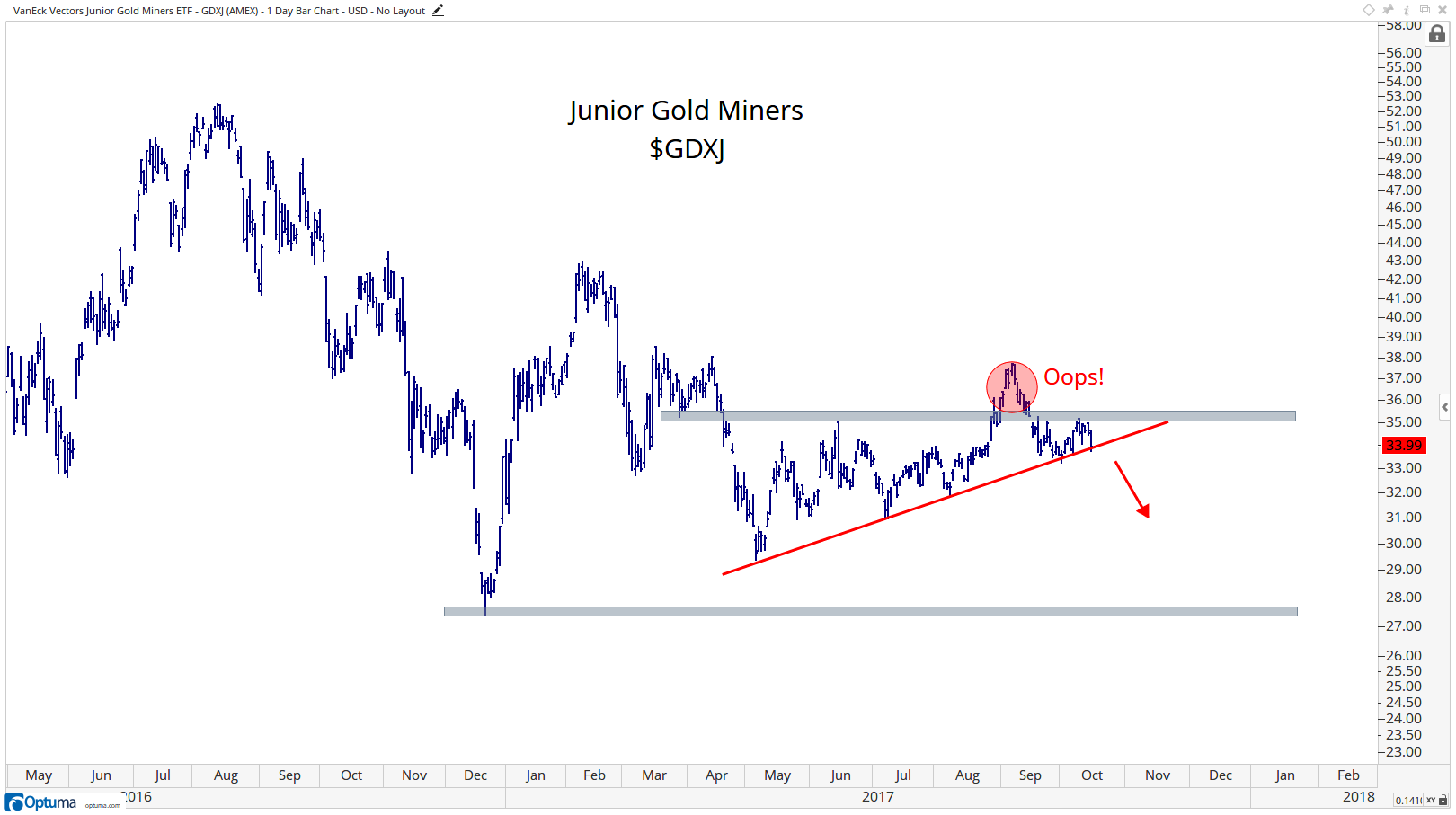 That’s how I see things. Nothing is lining up for a gold rally here, so I’m not going to force something that isn’t there. Like the Commercial Hedgers right now, I prefer the short side of this trade. They’re net short 223,000 contracts, one of the largest positions in history. You think they’re doing that because they think prices are going up?