With Cotton futures nearly 75% off their 2011 highs, market participants may be looking for a reason to get long this market. The weight of evidence however, suggests there is likely another 15% downside ahead.

The daily chart spanning back nine years shows prices topping and subsequently beginning a downtrend in early 2011. Over the past eighteen months prices have consolidated as they attempted to break back above the 2012 lows and downtrend line from the 2011 highs. Despite its efforts, Cotton could not close back above the confluence of resistance at 68 and is now threatening to break through the lower end of the 57-68 range.

From a structural perspective the next logical area of support lies near 50 at the uptrend line from the 2001 lows, which corresponds with the breakout level from 2009. This represents downside of 15% from current levels. 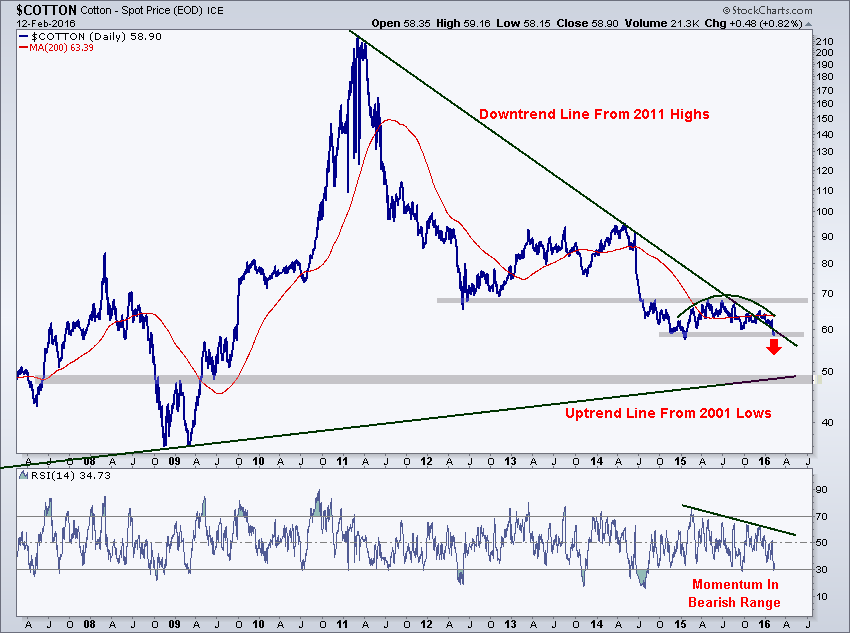 The eighteen month daily chart provides a more tactical view of the range that prices have been stuck in. Last week prices broke below the March and August lows while momentum diverged positively. While this may be indicative of the early stages of a failed breakdown, the downward sloping 200 day and massive overhead supply suggest that maintaining a neutral/bearish in this market is appropriate.

A break below the 2015 lows would target the 161.8% extension of the 2015 rally near 50.20, which corresponds well with the structural downside target discussed above. 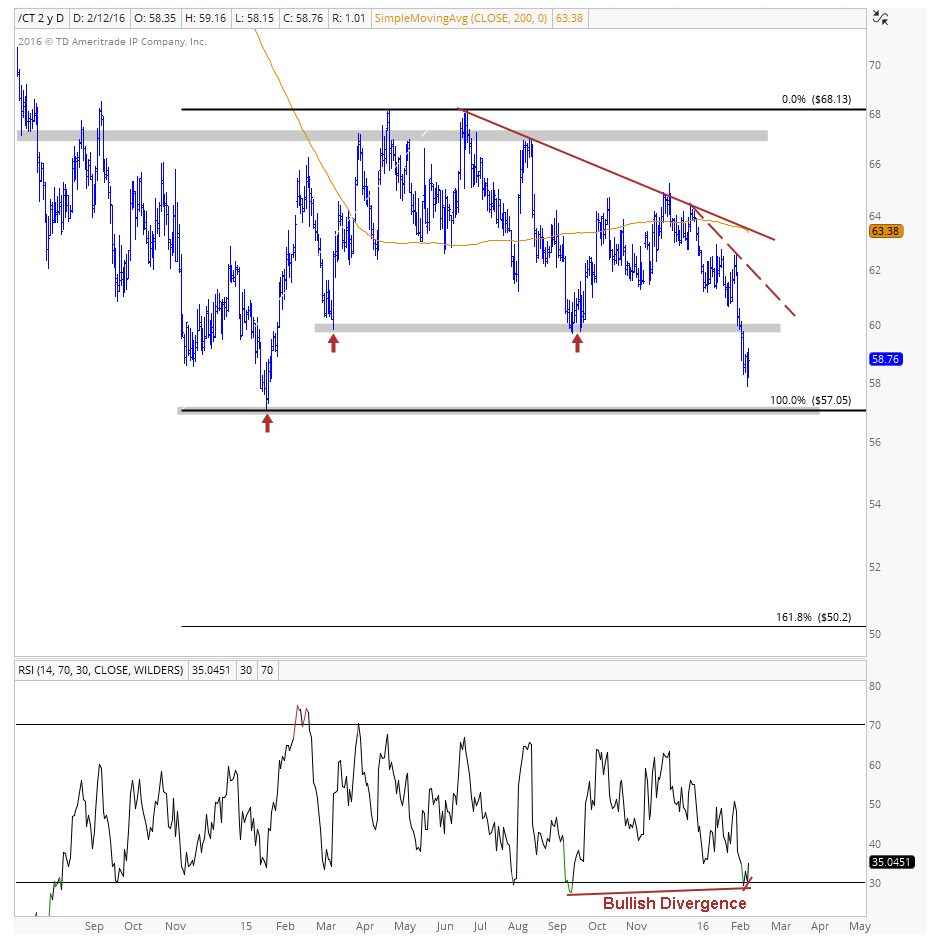 It’s also worth nothing that despite being in the middle of a seasonally strong period, Cotton prices still can’t hold a bid. This signals to me that larger forces are at work in this market. With sentiment readings and commercial hedger positioning at neutral levels, the weight of evidence suggests that this market has more room to the downside before reaching extreme levels of pessimism.

The Bottom Line: Cotton has been in a bear market since 2011 and there is little evidence to suggest that’s going to change anytime soon. Despite being extended in the very short-term, the weight of evidence suggests prices are headed toward 50 over the intermediate term.

Tactically, aggressive shorts can trade against the March and August 2015 lows in anticipation of a break of the 2015 lows. More conservative market participants can look to get short on a close below the 2015 lows. The former approach has a lower probability of success but is compensated by a higher potential reward, whereas the latter approach has a higher probability but lower potential reward.

In either case the risk is well-defined, but it’s up to each market participant to approach the setup in a way that fits within their individual process.

JC here – I think it’s that second to last paragraph is brilliant. I love how Bruni explains that by anticipating the breakdown, you’re lowering your probability of success, but increasing your potential profits. At the same time, waiting for a break down would increase your probability for a successful trade, but minimizing your total return. It’s all about defining who you are as an investor, what your time horizon might be and most importantly your risk tolerance. That paragraph might be the best part of this entire post. Nice work Bruni!